Our continued thoughts and prayers are with the people of Ukraine. On Saturday, I joined other members of the U.S. Senate and House on a video conference call with Ukrainian President Zelenskyy. The Ukrainian Embassy arranged the call. 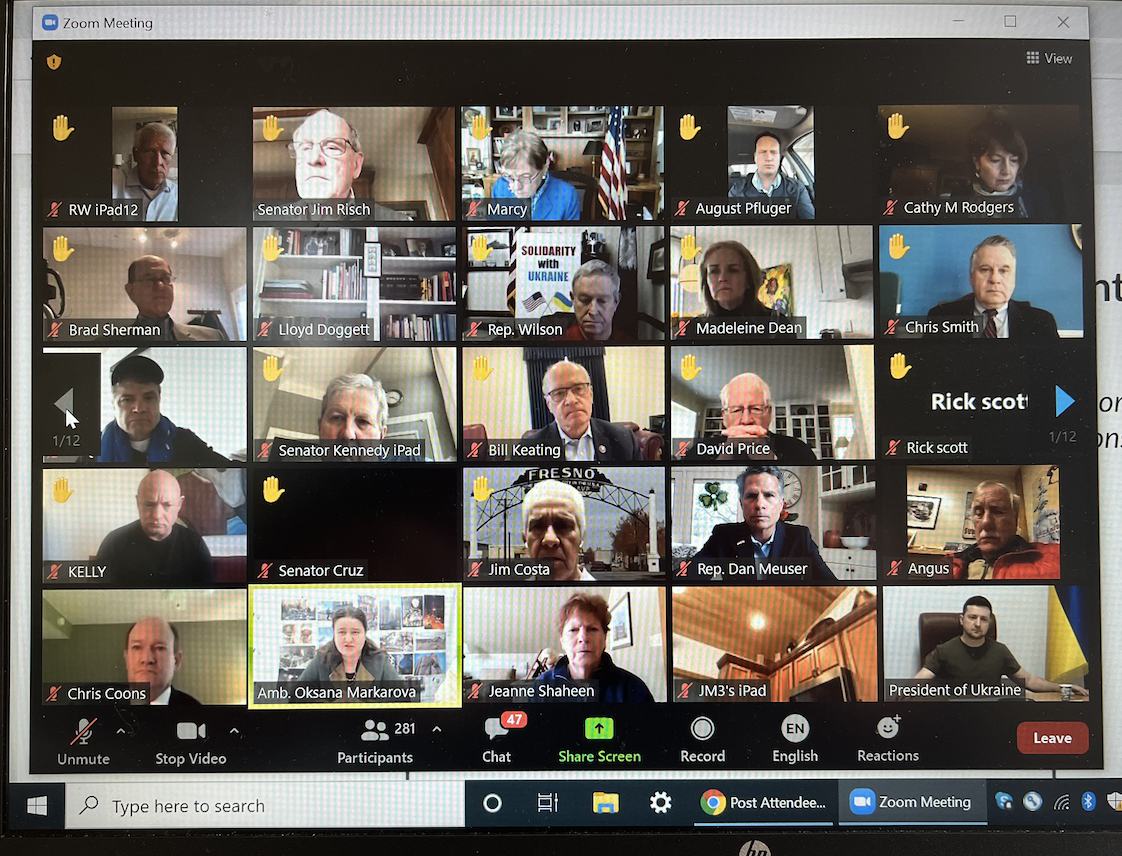 President Zelenskyy expressed that the Ukrainian people need our support as they continue to fight back against Russian military forces. They need support in the form of additional weapons and more pressure applied to Putin in the form of sanctions and trade restrictions.

Unfortunately, Biden's foreign policy is a disaster and can be best described as too little, too late. This week, as Biden praised Ukraine President Volodymyr Zelenskyy for his courage, I couldn't help but remember that Biden's initial reaction was to offer Zelenskyy a ride to abandon his people and effectively give up Ukraine to Russia. President Zelenskyy bravely, now infamously, responded, "I need ammunition, not a ride." His words have inspired the people of Ukraine to fight back against Russia… but the United States and Biden should have done and still could do more for the people of Ukraine.

It is important to remember that the regulations and executive actions Biden has put in place against domestic energy producers of fossil fuels are far worse than any sanction he has leveled against Russia and Vladimir Putin. I joined Stuart Varney on Fox Business to discuss Putin's invasion of Ukraine. Click here or below to watch. 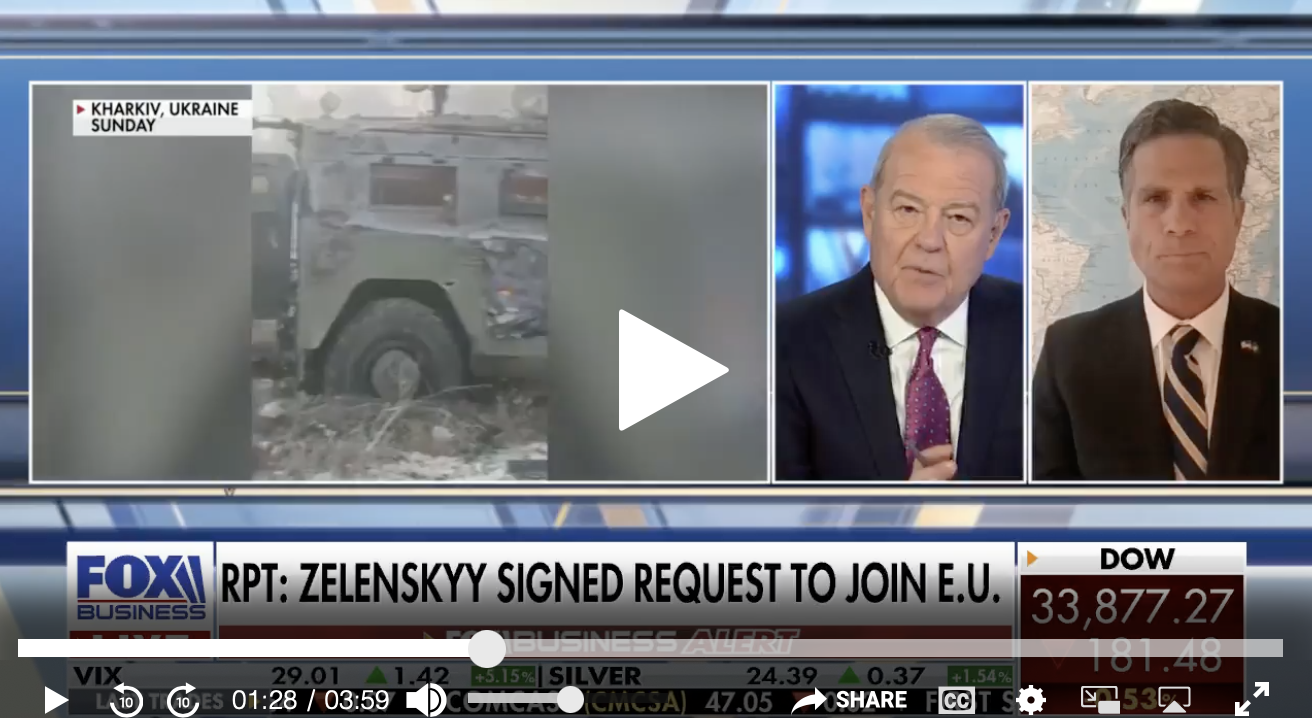 Putin's invasion of Ukraine is very much about oil and energy. The Biden administration is making the conscious decision to purchase nearly $2 billion of Russian energy per month rather than allow Americans to produce our own energy domestically. The United States is funding Putin's efforts, and we don't have to. We need to go back to creating our own energy.

With the energy reserves we have in our nation, we should not only achieve energy independence but worldwide energy dominance. The Biden administration and Democrats in Congress are weakening our country, both our national security and the economy, with their woke, irrational approach to reducing carbon emissions. The idea that our nation purchases energy from Russia, a tyrannical country committing war crimes, cyber terrorism and has no regard for carbon emissions reductions over our own resources is preposterous. Biden and the Democrats in Congress who support their assault on our Constitution, including our Second Amendment and the rights of the unborn, a tragic border policy, impede our economic stability with $4 gasoline and other inflationary policies and regulations, and continue to attempt to overspend us into oblivion... must be called out and voted out. 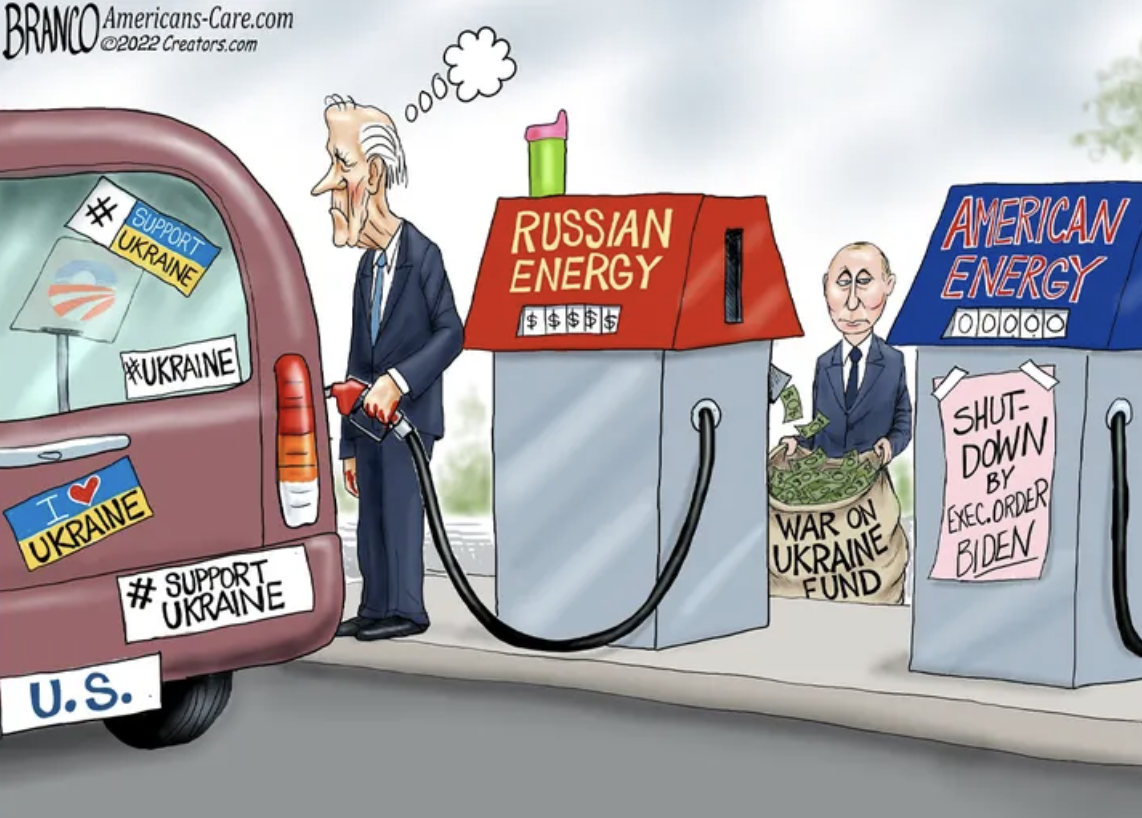 On Tuesday night, Biden delivered the annual State of the Union speech. I joined Newsmax TV's John Bachman Now to discuss the Ukraine situation before Biden's speech. Click here or below to watch. 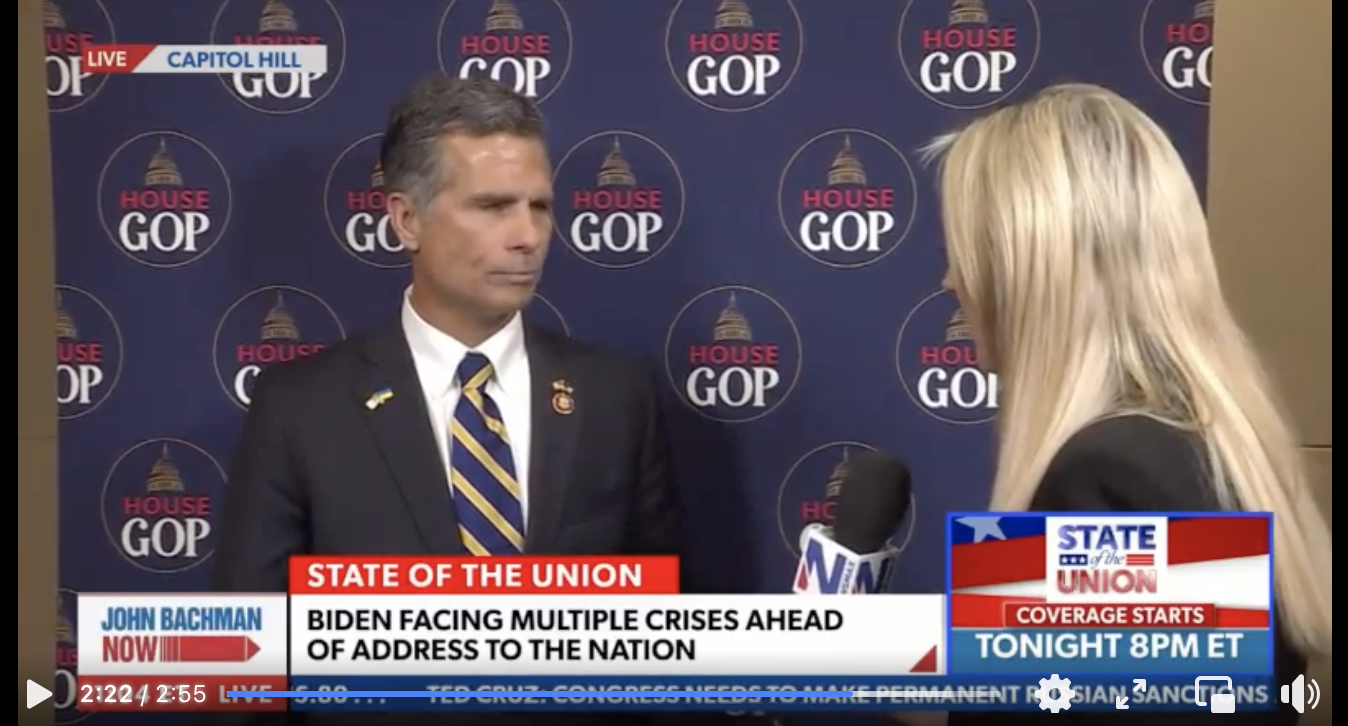 The truth is that Biden's policies and his insistence on pushing a far-left agenda are hurting American working families. The American people hoped that the President would reverse course on his failed far-left agenda. Instead, we heard a speech utterly devoid of reality that touted fabricated victories.

The last 14 months under Biden's leadership have been a disaster by any objective measure. American public safety is at risk. Crime is surging, and illegal immigrants and dangerous drugs overrun our border. Labor shortages, supply chain disruptions, record inflation and the threat of higher taxes are stifling economic growth... contributing to growing trade deficits, overreaching and unnecessary mandates, attacks on our free speech and limitations on our personal privacy.

Gas and energy prices are skyrocketing because of Biden's anti-energy policies have destroyed our domestic energy independence. He has halted the Keystone XL pipeline, stopped oil and gas leases on federal lands and waters, discouraged banks from investing in fossil energy projects, and as recently as last week, paused new oil and gas drilling permits. This anti-American energy policy is aiding our enemies like Russia, whom we now rely on for energy.

I'm an optimist but also a realist. Biden and the Democrats need to realize that we need to Wake Up and Woke Down so we can put this country back on the right track… the America First track that provided so much prosperity under President Donald Trump.

Just when you think that can't get worse for small businesses, the Biden administration picks up a shovel and keeps digging the hole deeper. This week, the Biden administration is moving forward with the Waters of the United States (WOTUS) rule that is detrimental to Pennsylvania farmers and small businesses. This rule gives the Federal government jurisdiction over nearly every waters on private land. I will continue to stand in firm opposition to this policy and I am hopeful that once a new majority is in place in Congress, we can get rid of this backward regulation.

IN NEWS YOU WON'T HEAR IN THE MAINSTREAM MEDIA: Inflation is rising. Wages are falling. Americans are suffering under the weight of high prices for fuel, food, and other necessities.

I have traveled around the 9th District a ton, and I can tell you that many families are feeling the crush of inflation and high gas prices. Americans are hurting. Many are astounded how quickly the extreme left-wing policies of Biden and far-left Democrats have driven our country into a ditch. We must do better. That begins with winning back control of the U.S. House in November.

As I announced last week, I am running for re-election, and we are taking nothing for granted. The first step of the campaign is working on getting on the ballot. If you would like to help circulate or sign a petition, please contact our campaign by emailing [email protected] or calling 570-915-3027. 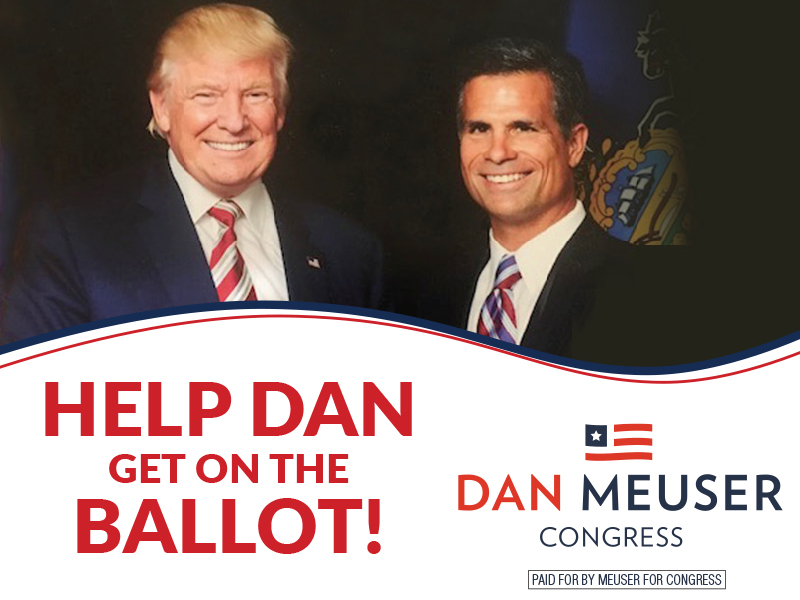 We have been working hard on the campaign trail. After session ended in Washington, D.C., I traveled to Bradford County for a meet-and-greet in Towanda. Special thank you to all that attended. 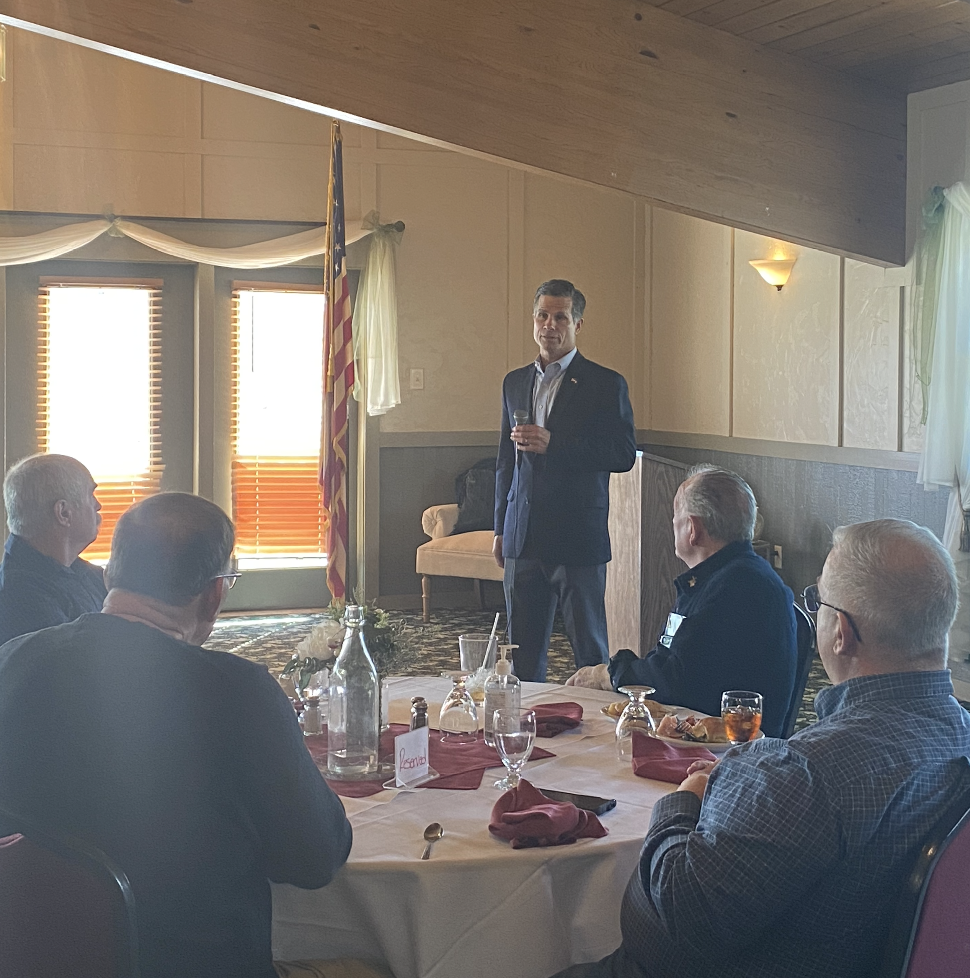 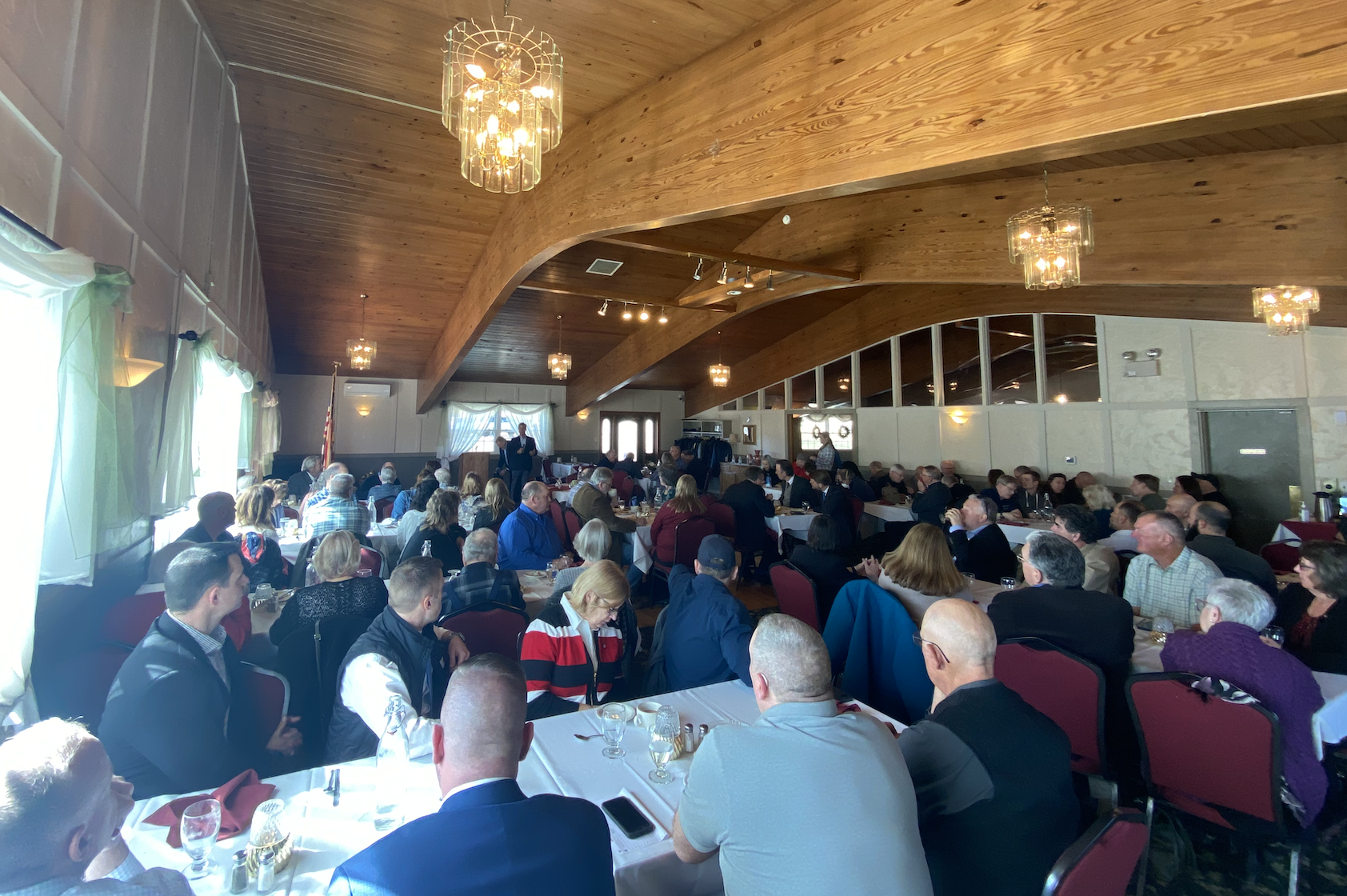 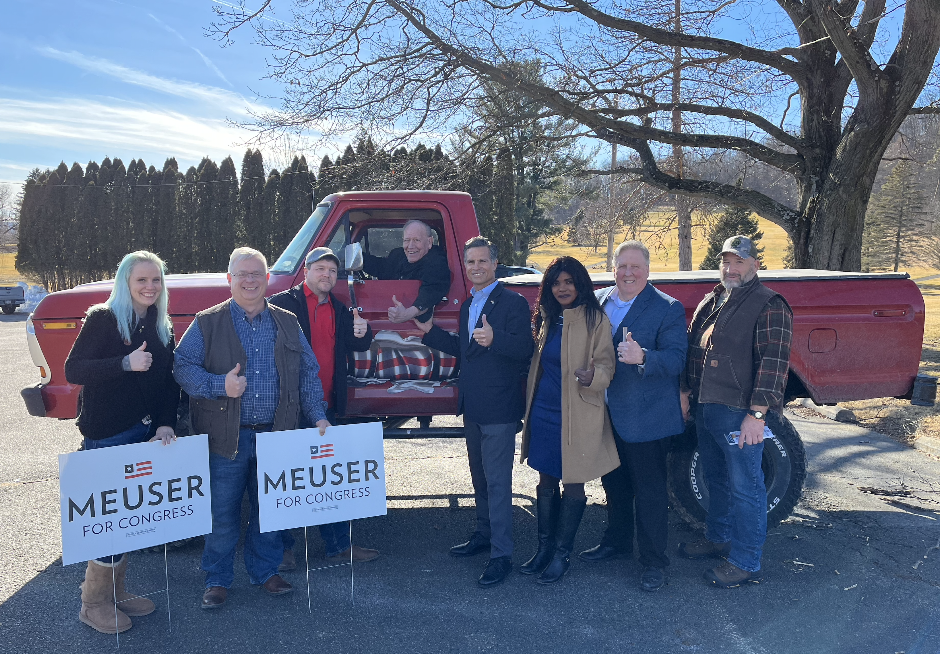 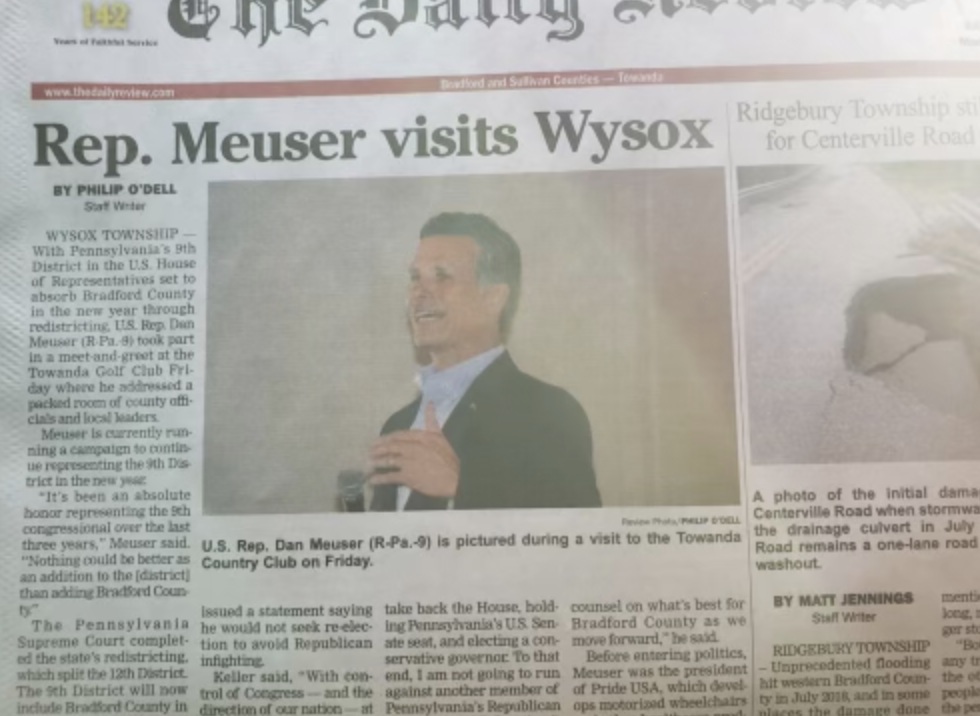 Later, I stopped by a petition signing event at Di Salvo's Wine Bar in Lycoming County. I was humbled by the large outpouring of supporters who stopped out to sign our petitions and hear about the latest in Washington, D.C. It was great to have State Senator Gene Yaw in attendance. 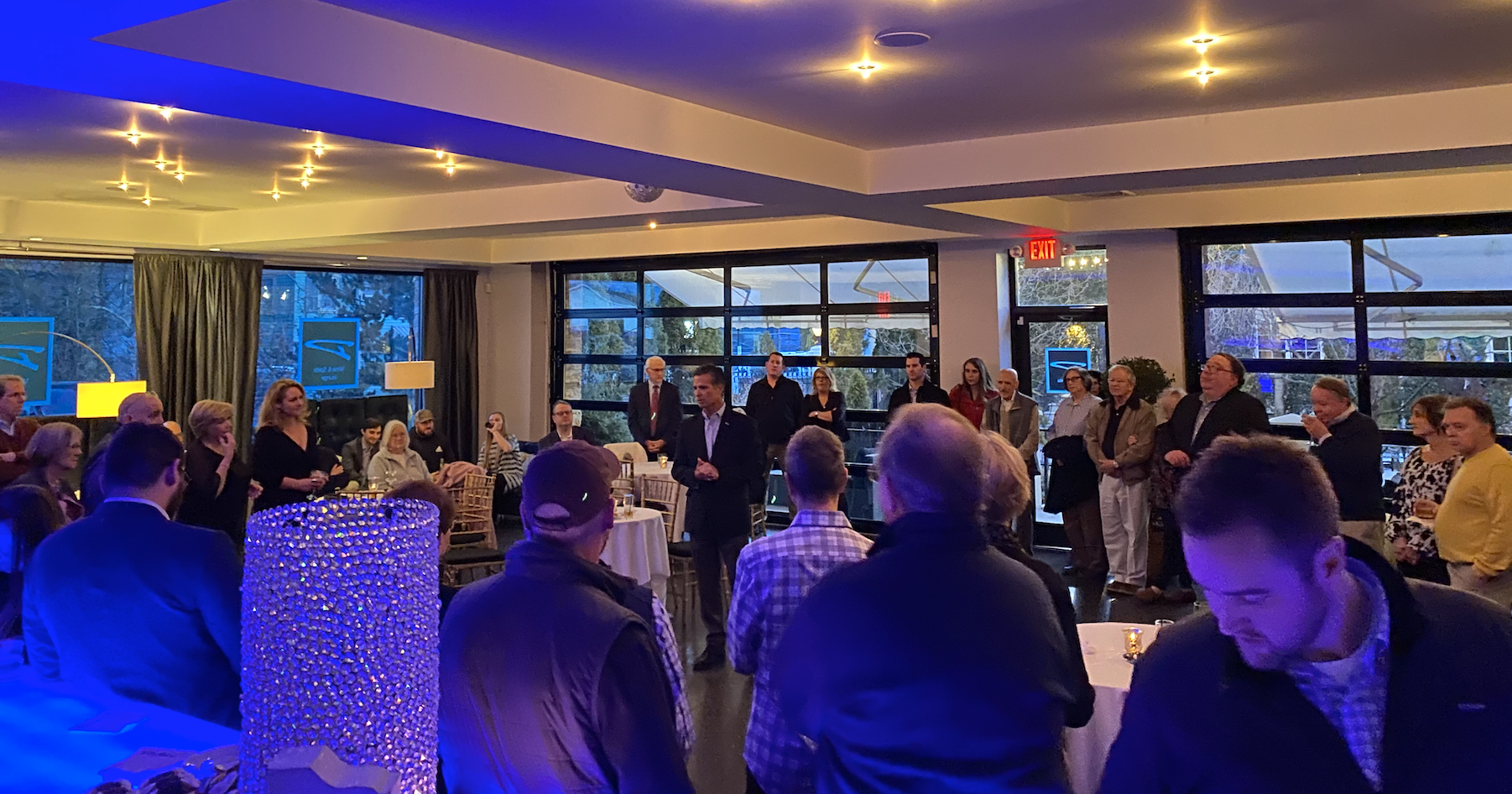 On Saturday, I attended the Columbia County GOP petition event. 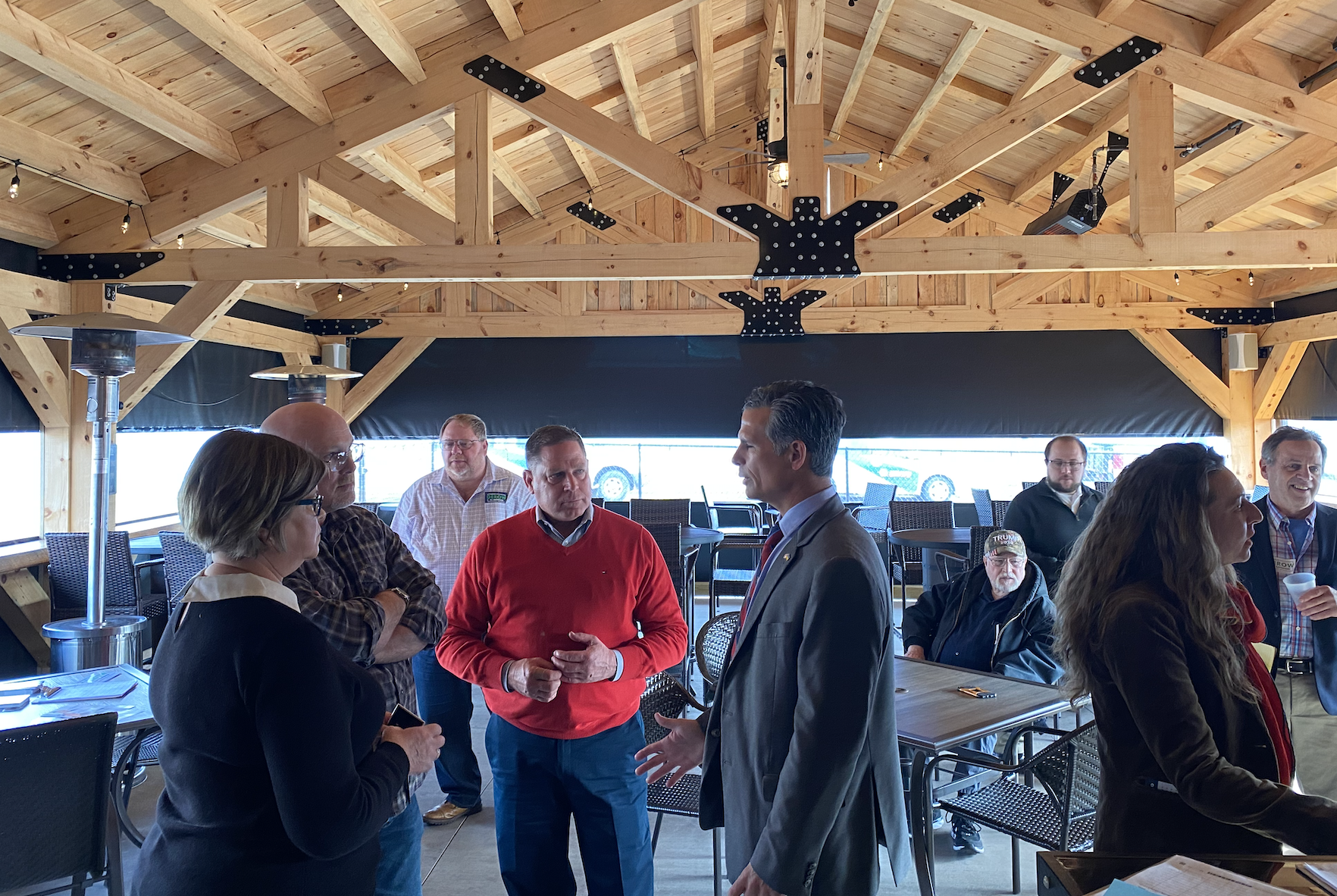 Later, we attended the Montour County GOP Star Spangled Gala. I was able to address the committee, and you could feel the energy in the crowd. Great event. 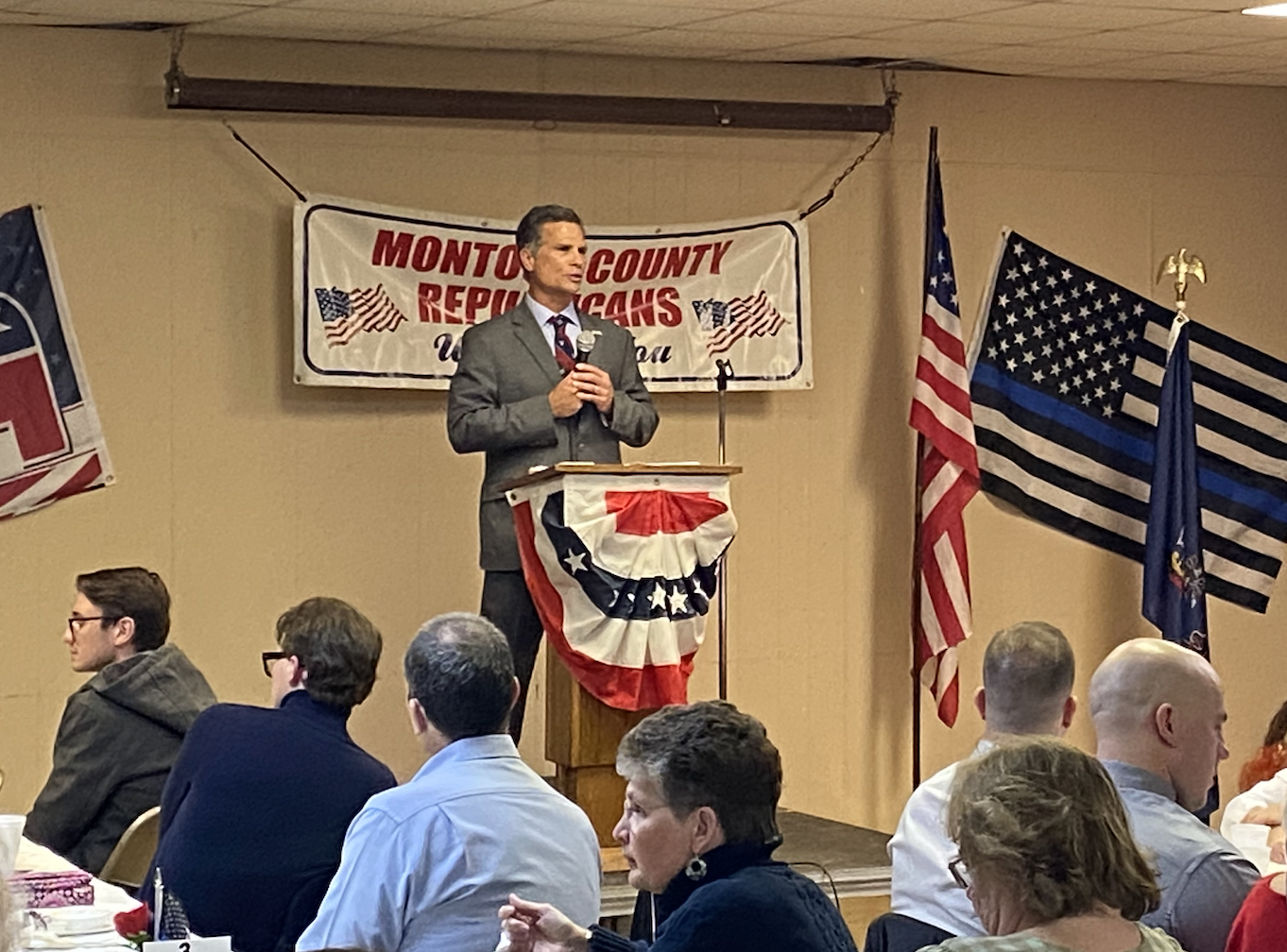 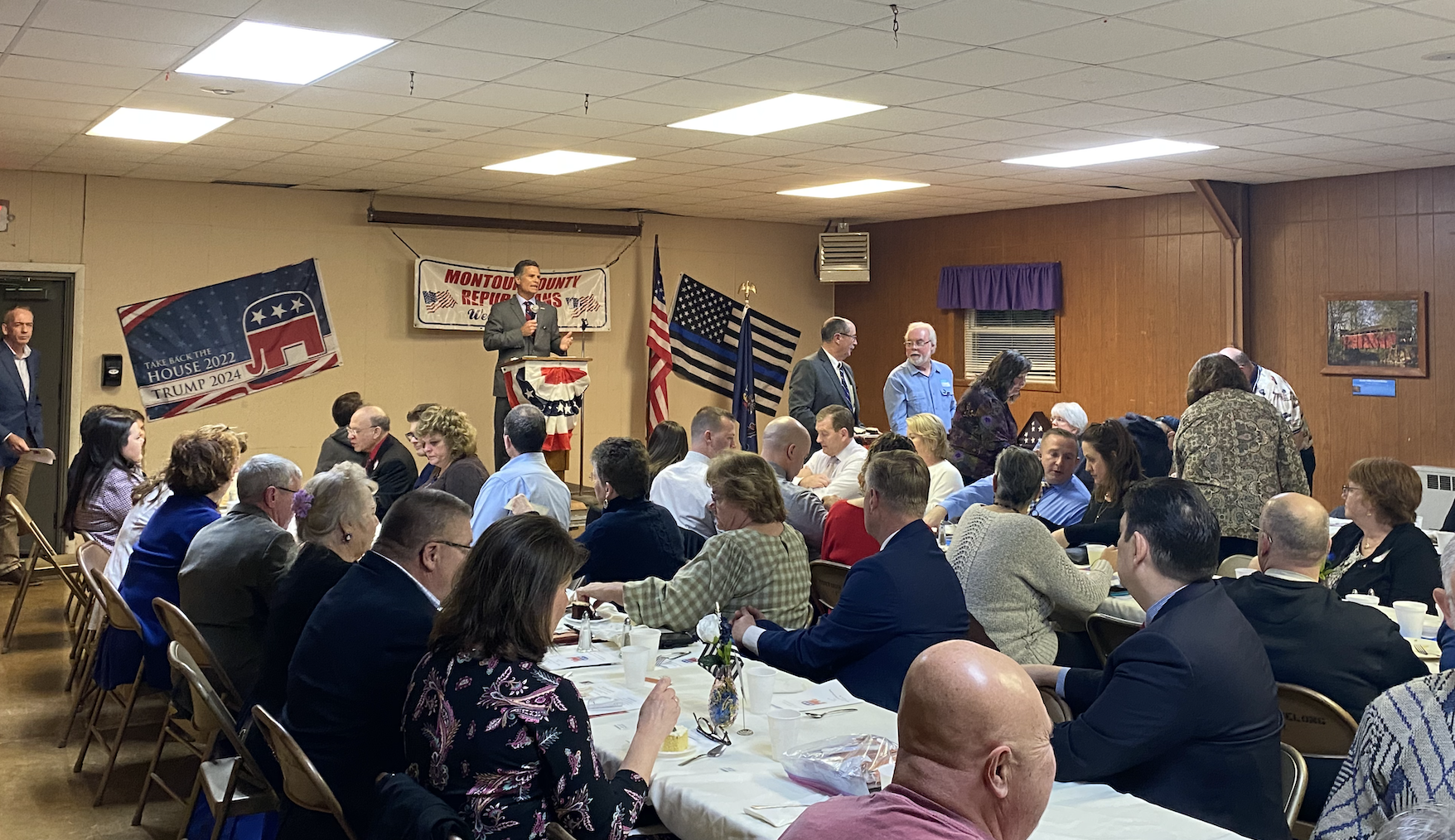 We will continue to be on the trail in the coming days and weeks and I look forward to seeing you there.