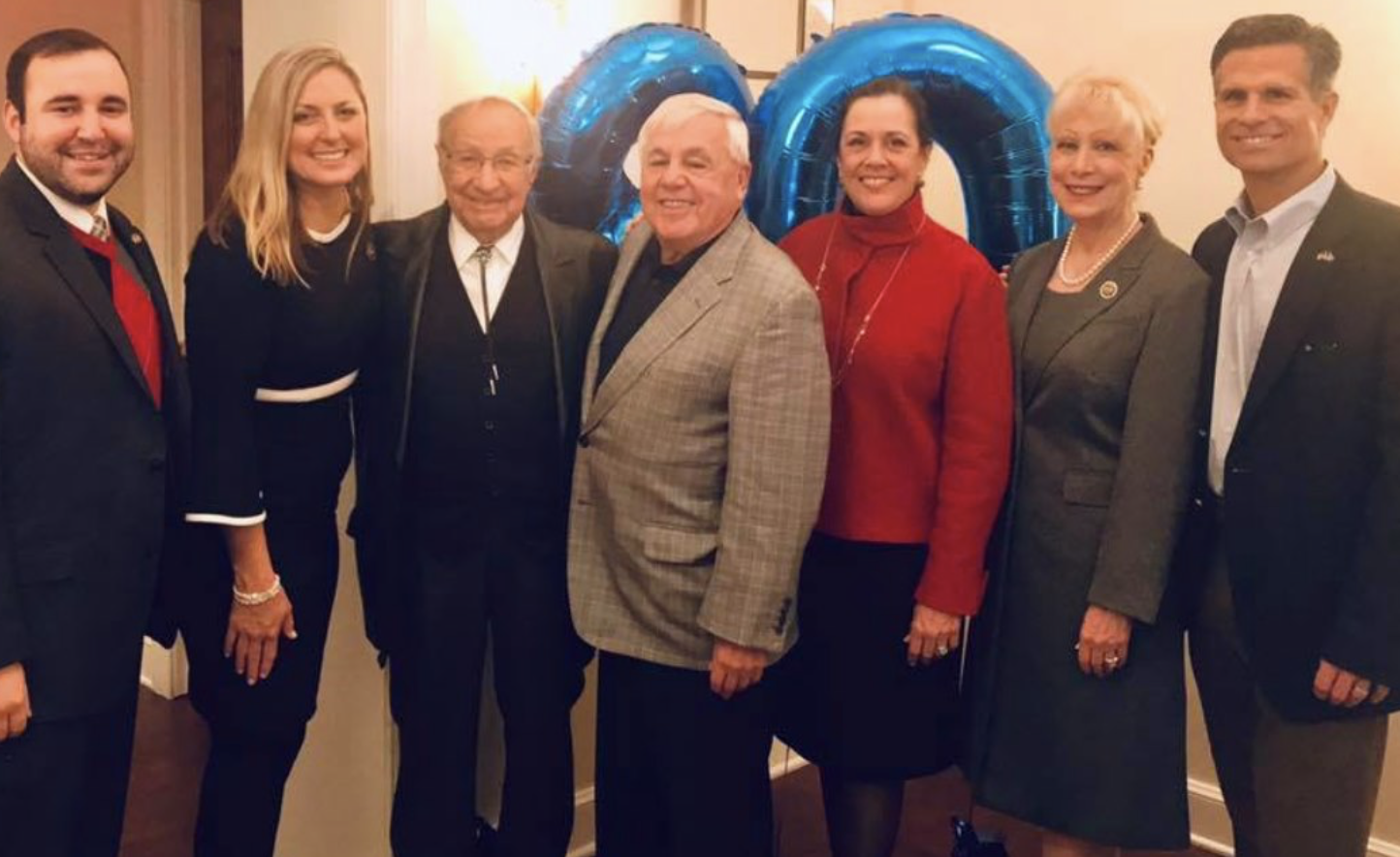 (Pictured alongside (L-R) Rep. Aaron Kaufer, Rep. Tarah Toohil, Hon. Pat Solano, Bob Tambur, Sen. Lisa Baker, Rep. Karen Boback)
He taught us so many lessons, and I hope to build upon his greatness and honor him by being honest and inclusionary public servants, a bar he set so high through his actions. One of his many famous quotes that he reminded us of often was "that the politics of inclusion is how you get things done, "… and he got a lot done.

Pat was blessed with a great, great family, and he counted so many of us as part of his extended family. God Bless his incredibly wonderful wife Marie, his children, grandchildren and all of those who were blessed enough to have shared time, learned from and enjoyed the one and only Pat Solano.

Pat, several years back, started the Northeast Pennsylvania Leadership Group. He personally wrote the mission statement. These are the carefully selected words of a great man. He cared so much about others and deeply about the Commonwealth of Pennsylvania. (See below) 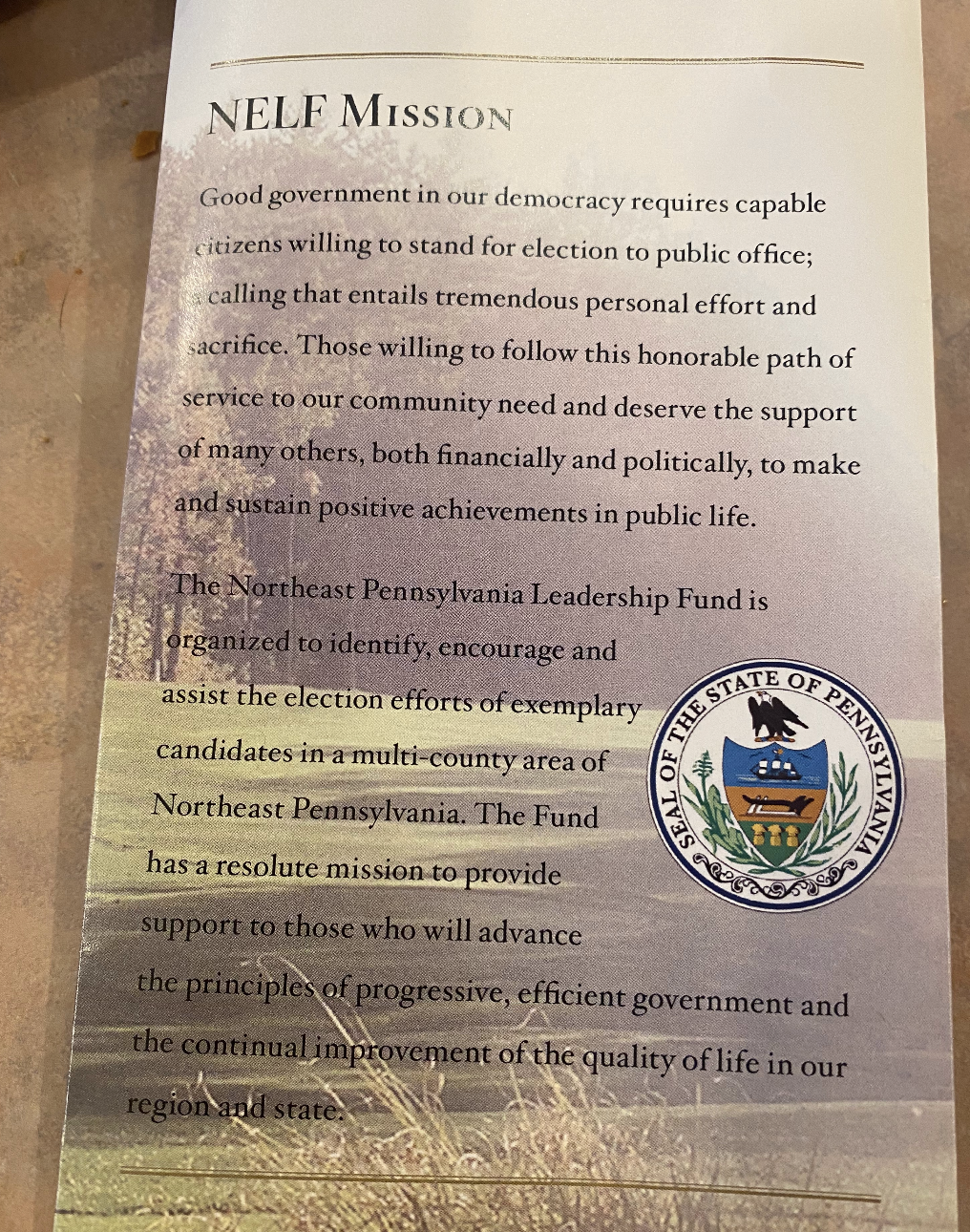 On another sad note, I must pay tribute to my fellow elected official and good friend, State Senator Dave Arnold who passed away after a courageous battle with brain cancer last week. Dave was a kind, thoughtful and dedicated public servant. I first got to know Dave in his role as District Attorney, where he had committed many years of his career to the issue of law and order and keeping Lebanon County safe. When the community asked him to step-up and represent them in the State Senate, Dave took on that challenge as he was diagnosed and battled this horrific disease. Despite his intense health struggles, Dave fought as hard as anyone for his constituents. He did so with his wife, Alicia, and daughter, Reese, by his side. Shelley and I send our thoughts and prayers to his family during this difficult time. 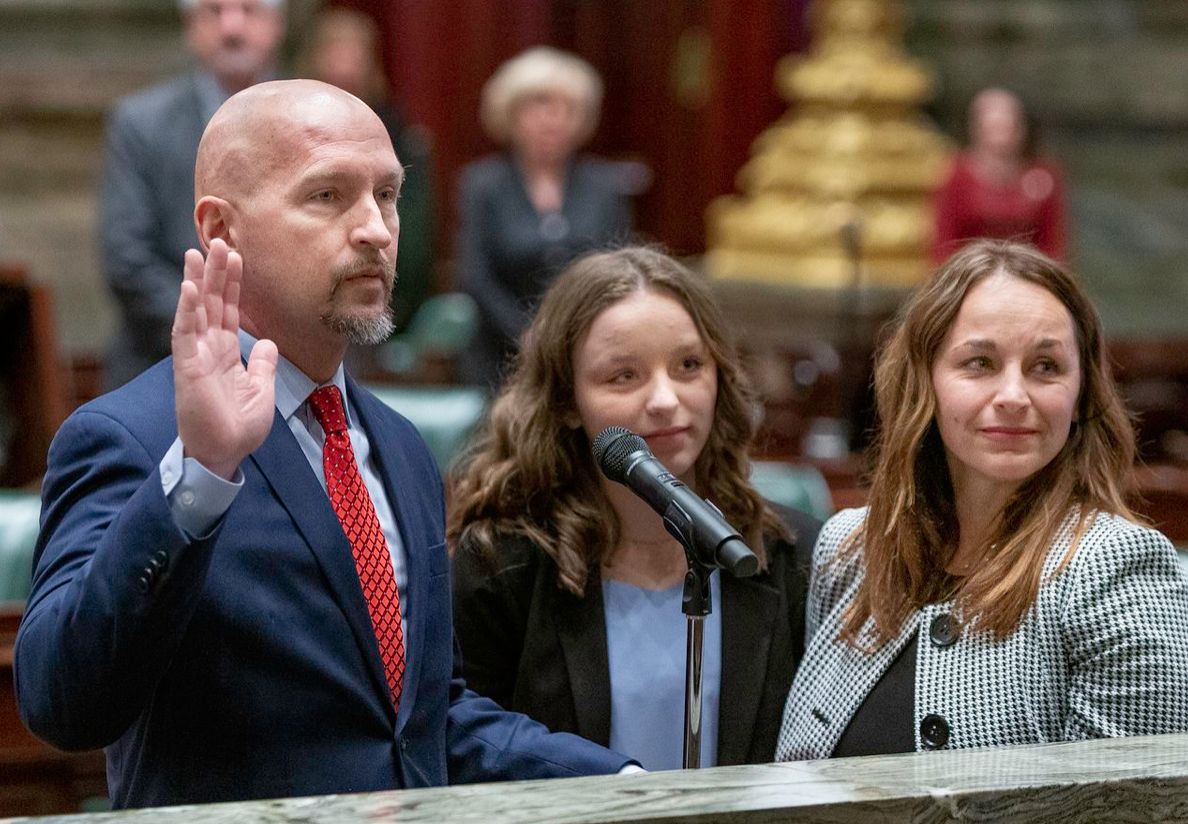 This week, I joined my congressional colleagues in Washington, D.C. for Inauguration Day as we witnessed the peaceful transition of power between presidential administrations. For the future of our nation, we remained hopeful that the messages of "Build Back Better" and "Uniting" were not just campaign slogans and actually the incoming Biden Administration’s plan. President Joe Biden has an opportunity to lead and put the needs of all Americans first. However, that will require him to abandon the extreme liberal agenda he campaigned on. Unfortunately, his first few days have done more to divide us, rather than unite us. Many of his executive orders were tremendous steps backward for American families and workers.

And it appears this is just the beginning. I joined Fox Business’ Stuart Varney to discuss the President’s decision to kill the Keystone Pipeline. Click here or below to watch. 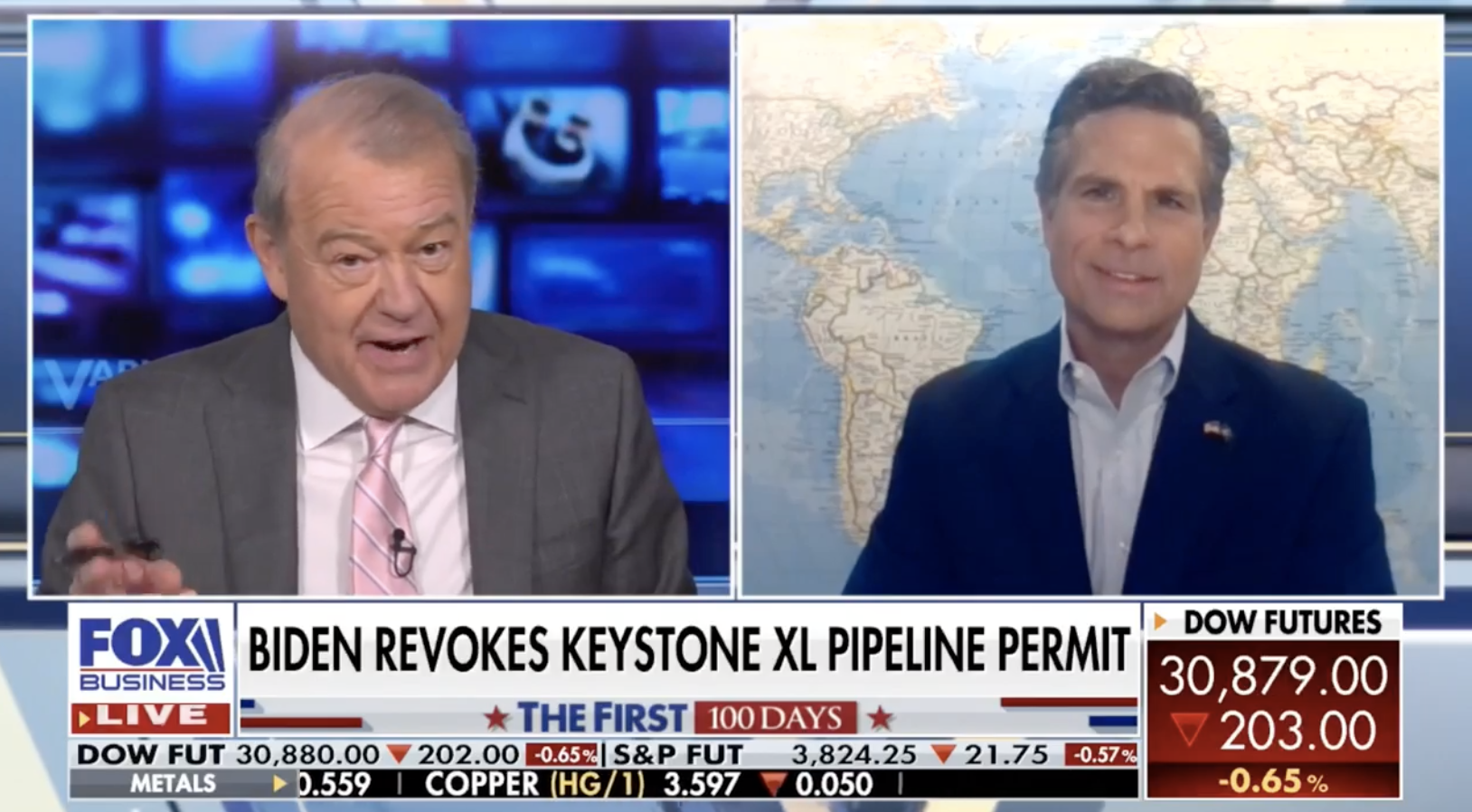 President Biden has already seen three unions, all of which endorsed his campaign, denounce his decisions. The United Association of Union Plumbers and Pipefitters, North America's Building Trades Union and the Laborers' International Union of North America all criticized Biden's executive order and the loss of jobs. This is an example of President Biden prioritizing the wishes of the extreme left above American working families and energy independence.

President Biden must show courage by acknowledging that President Trump’s Administration was incredibly successful in many ways.

President Biden can only accomplish his goal of “Building Back Better” if he is willing to acknowledge these achievements, resist the calls to erase these successes and work with Congress to build upon them.

While he has not gotten off to a great start, I am hoping that President Biden will consider working together. That begins with an agenda that embraces all Americans. That starts with working on a plan that safely reopens our nation, expands transportation and infrastructure spending, makes quality healthcare more affordable, brings back manufacturing jobs from around the world by offering a competitive business environment so better jobs are created.

Another way to unite our country is by encouraging the Senate Democrats to abandon the impeachment effort of President Trump. Why?

These are the reasons why I voted against the impeachment in the House of Representatives. It is time to move forward.

IN NEWS YOU WON’T HEAR IN THE MAINSTREAM MEDIA: While the Trump Administration focused on border security and worked with Mexico and Central American nations to do address the illegal immigration issue, President Biden has signaled to the world that our borders are open. 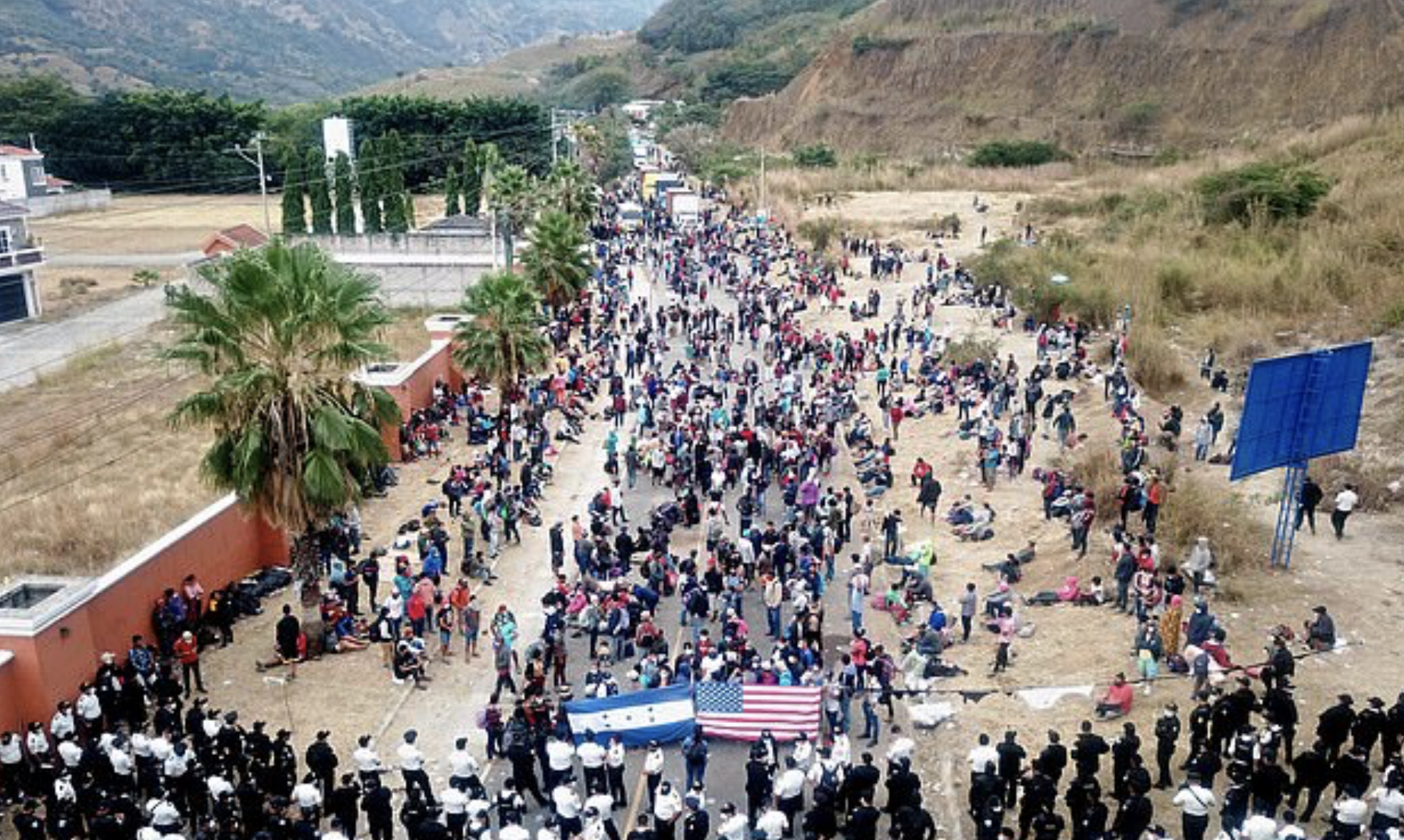 Already, there is a massive group of 9,000 Honduran refugees marching towards our southern border from Central America. President Biden has sent a message to the world that you can come to America illegally.

These border crossings are not only illegal but destroy families. People perish during their long trek and the ones who do make it to the border risked drowning in the Rio Grande. It is a fact, ask any CBP agent, that drug cartels used these poor people as carriers and distractions as part of their efforts to push drugs into our country. It appears we are about to take a step backward here as well and open our nation’s borders to illegal immigrants, more drugs and severely weaken our national security.

We had additional inauguration ceremonies this week in Pennsylvania as we congratulated our new Pennsylvania State Treasurer Stacy Garrity and our new State Auditor General Tim DeFoor. I had the pleasure of attending Treasurer Garrity’s reception the night before her swearing-in. These two Pennsylvanians are great additions and will be statewide leaders for Pennsylvania and our Republican Party. 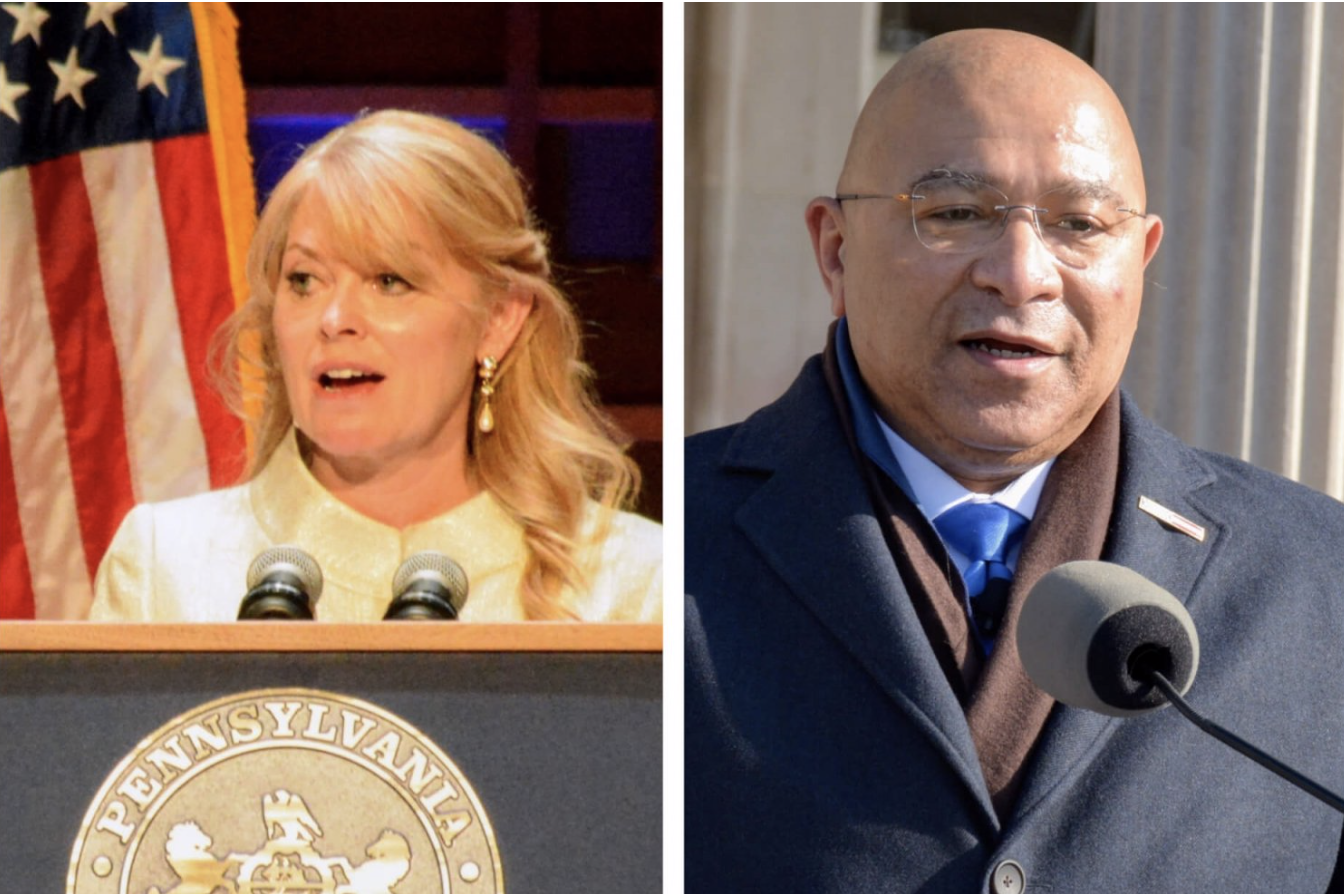 Over the past few weeks, I have been speaking at regional PA GOP meetings about the important work we have in front of this year and the importance of winning the upcoming judicial elections. With the amount of overreach and legislating from the bench we have witnessed from the Pennsylvania Supreme Court, I should not have to emphasize the importance of these elections. Additionally, we also have countless local elected offices up for election around the Commonwealth. These elections are important.

The GOP is poised to come back and in a big way. Remember, victories in 2021 will translate into wins in 2022 and beyond.