Election Day is only 8 days away. The work we put in over the next week will determine what direction we want to move this nation.

Do we want to elect Democrats to continue implementing a failed agenda that has led to a border crisis, a domestic energy crisis, and record inflation that has led us into a recession? Our domestic energy industries, especially natural gas, coal, and conventional oil, are under attack by the Biden administration and Democrats in Congress. Republicans have a plan to unleash American energy and bring prices down for all Americans.

I joined "Varney & Co." on Fox Business to discuss the importance of Pennsylvania natural gas & domestic energy production. We also discussed John Fetterman's flip-flop on fracking. The truth is that Fetterman and many Democrats oppose fracking and the natural gas industry, only to pay them lip service around election time. Their waffling this year has only become more pronounced as they find themselves in the waning days of this election, where gas prices remain high. Click here or below to watch my interview. 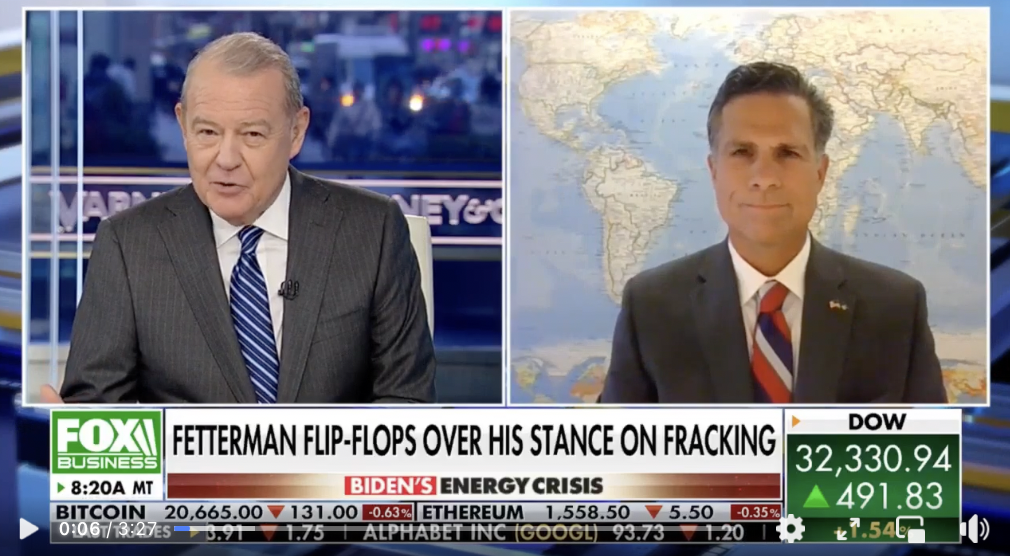 The Oz-Fetterman debate on Tuesday evening captured the nation's attention, and it was warranted. As we continue to see the dangers of the extreme-left Biden agenda fail, we don't need John Fetterman to serve as another vote in the U.S. Senate. He will simply be a rubberstamp for the same failed Biden agenda. Please vote and get the word out for Dr. Oz. His race is critical not only to the future of Pennsylvania but also to the future of our nation. I joined "The Evening Edit" on Fox Business to discuss the U.S. Senate race in Pennsylvania and our dependence on Saudi Arabia for energy. Click here or below to watch. 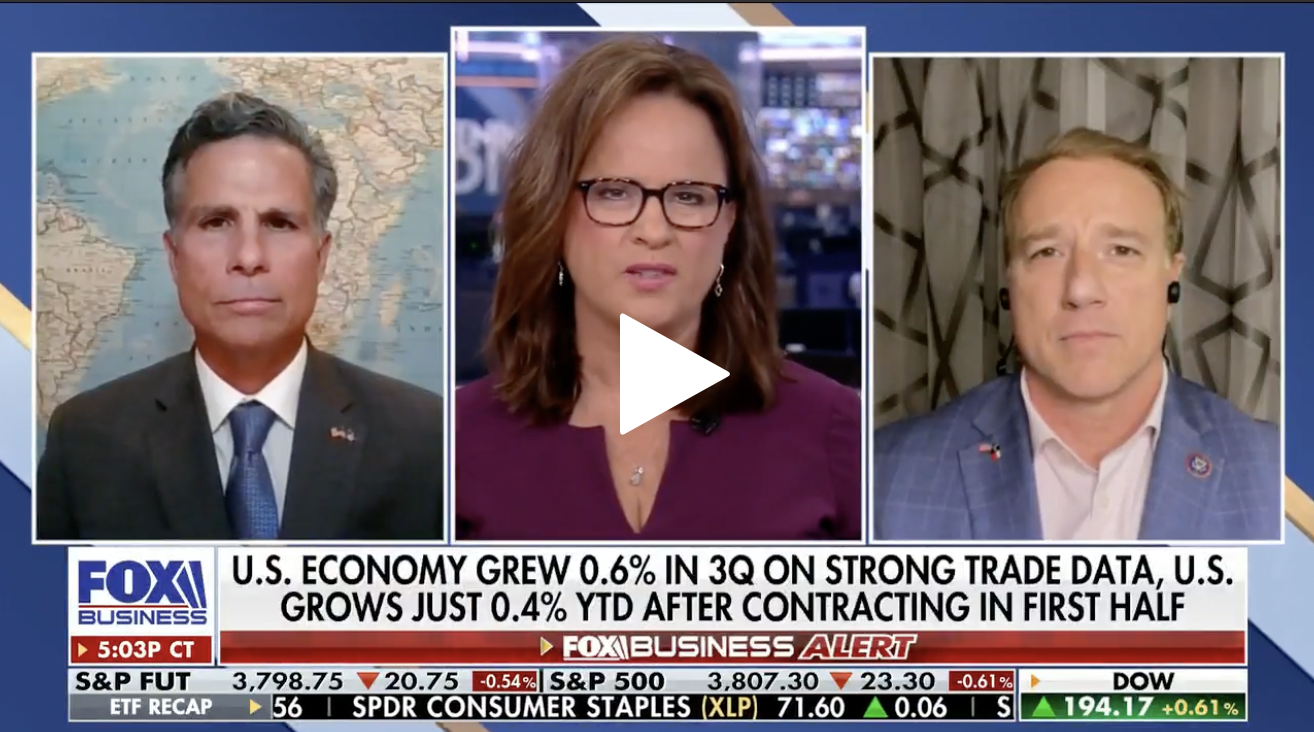 Similarly, I want to stress the importance of voting for Doug Mastriano. Doug is a conservative who stands tall for personal liberties and freedoms. During the Covid-19 lockdowns, he joined me in fighting for small businesses and citizens who had their rights severely violated by government overreach. So, again, please go to the polls and vote for Doug Mastriano for Governor on November 8th. 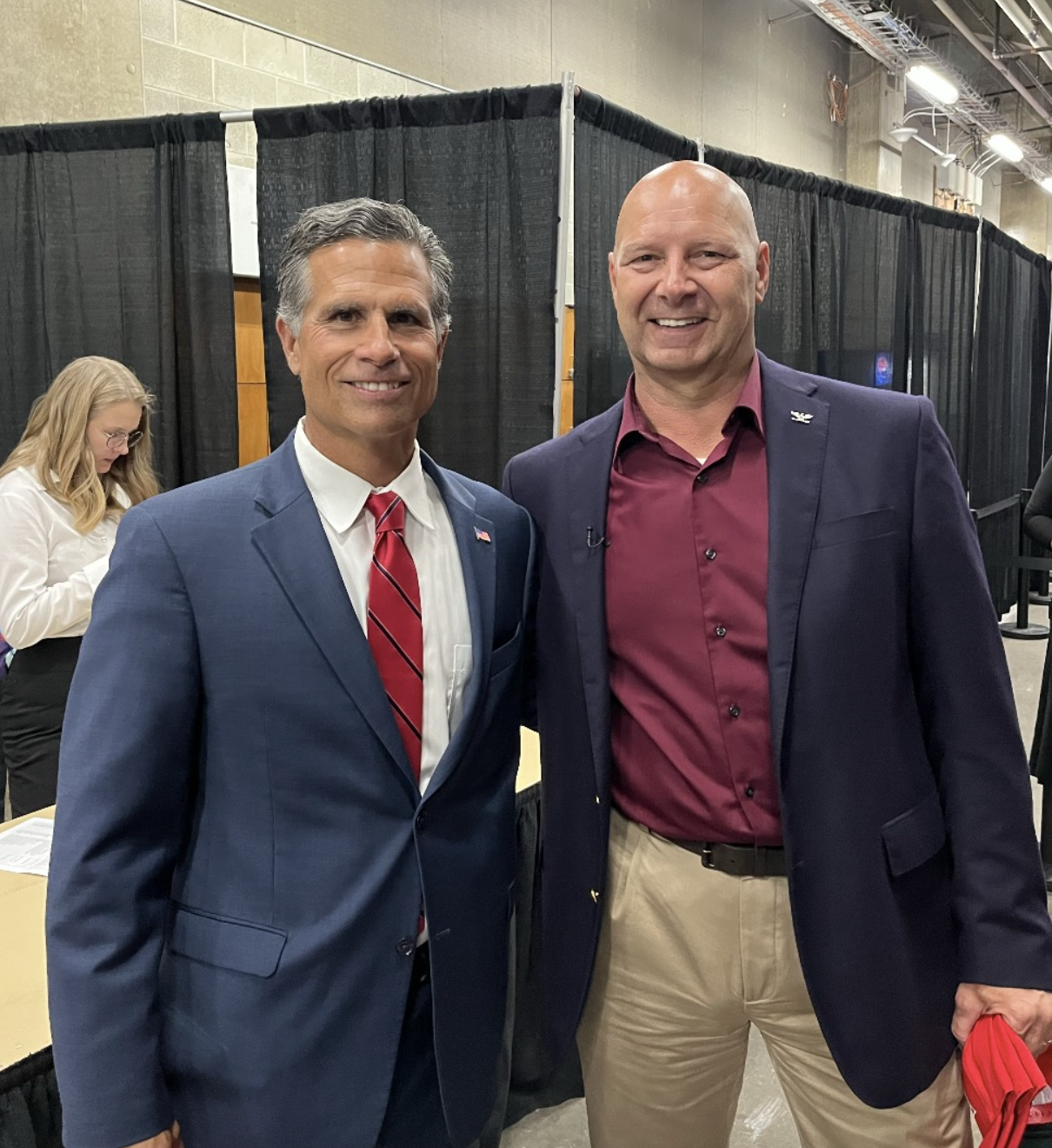 AROUND THE DISTRICT:
On Monday, we headed to Bloomsburg, where my good friends Dr. Michael Suk and Fred and Cathy Kluck hosted a fundraiser. I want to thank them for their hospitality and support. I got the opportunity to meet some great new friends. 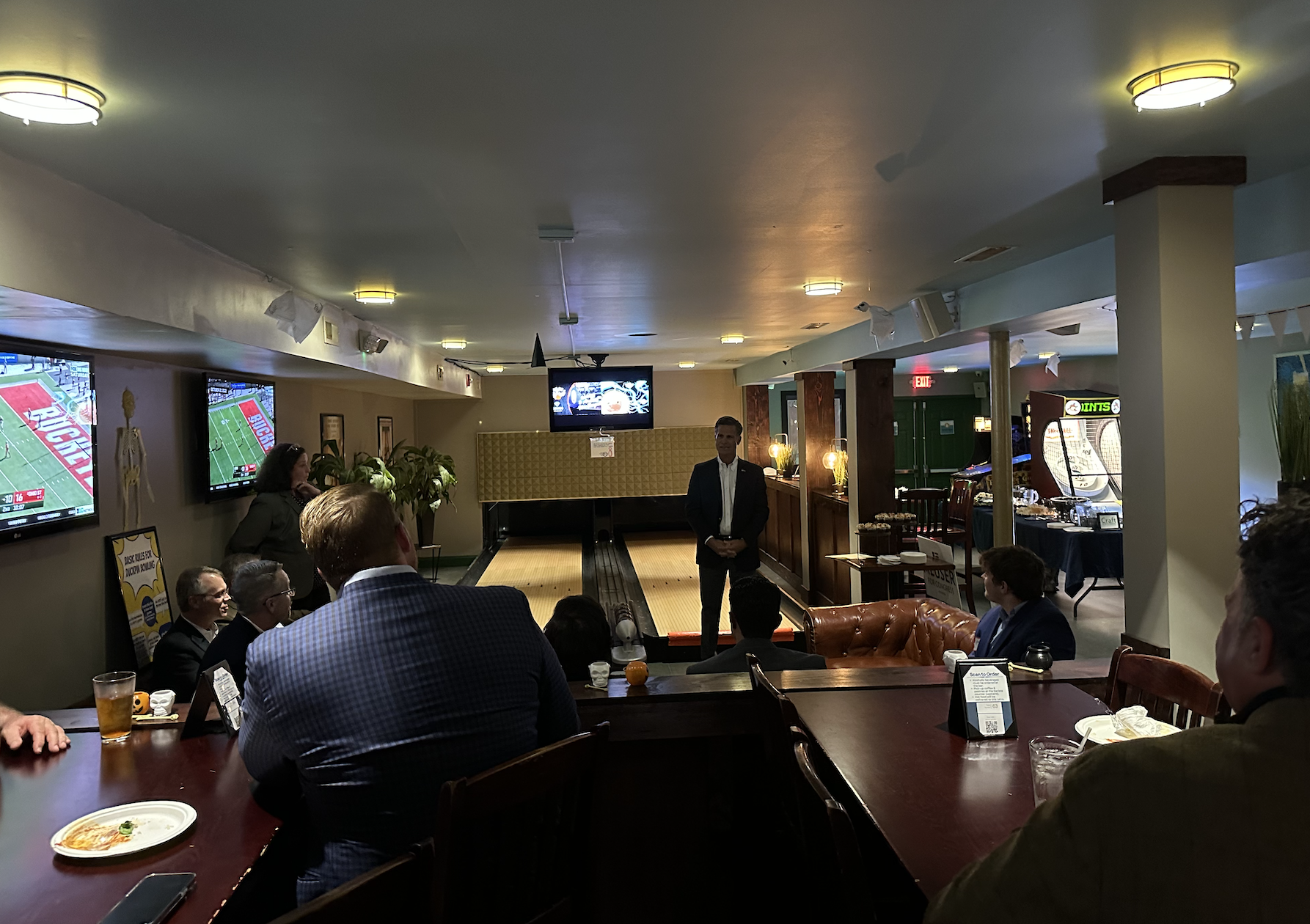 On Tuesday morning, I joined the Luzerne County GOP as they welcomed U.S. Senator Rick Scott (FL-R) and RNC Chair Ronna McDaniel to their headquarters, where we rallied support for the upcoming election for our Republican team. 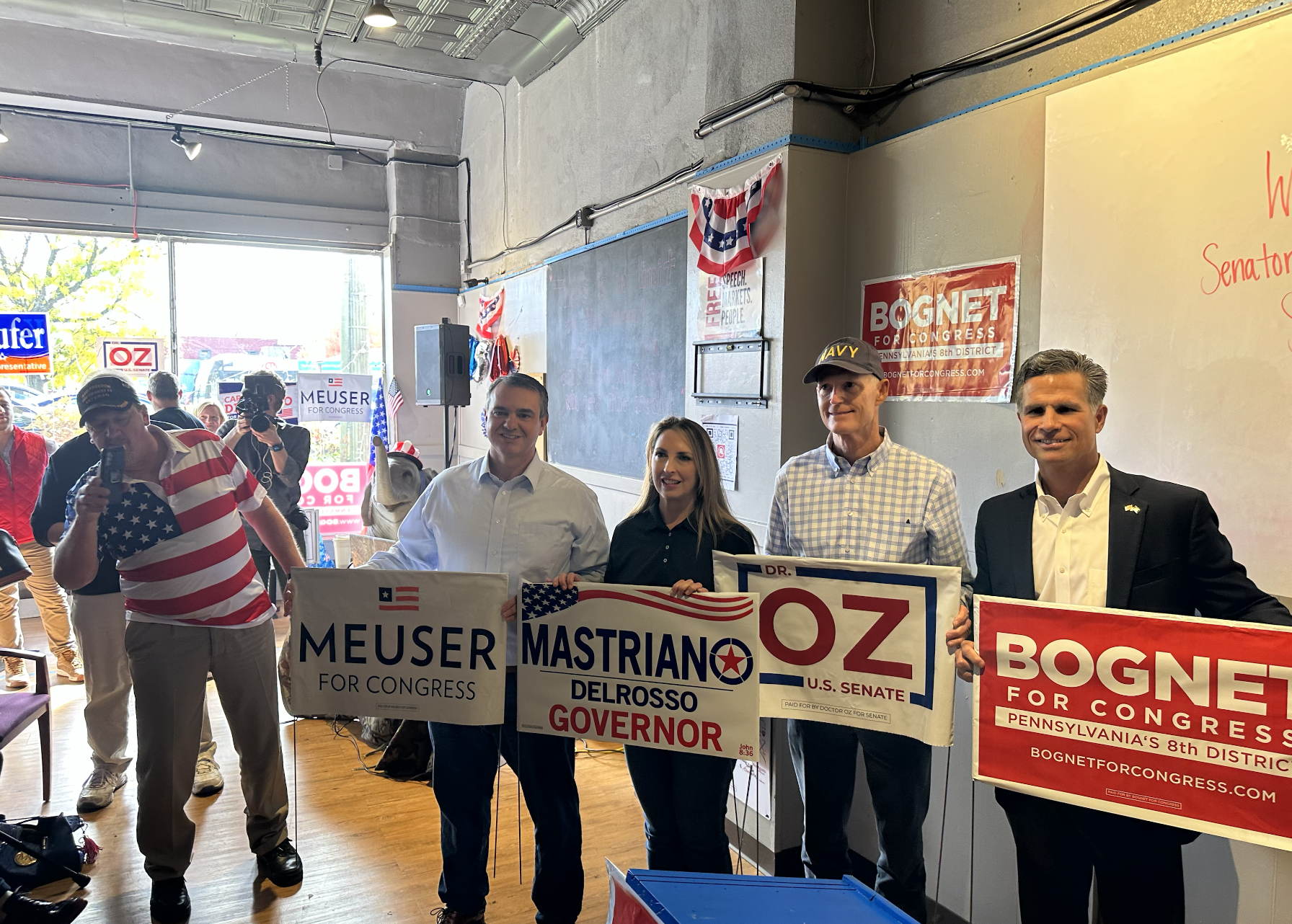 I joined Penn Tech College's leadership on Wednesday for a very impressive tour of their school. Penn Tech offers a wide variety of courses that truly focus on ensuring students are prepared to enter the workforce. The work they do helps ensure these students have the skills necessary to immediately hit the ground running in the workforce, no matter what field they enter. It is an excellent institution. 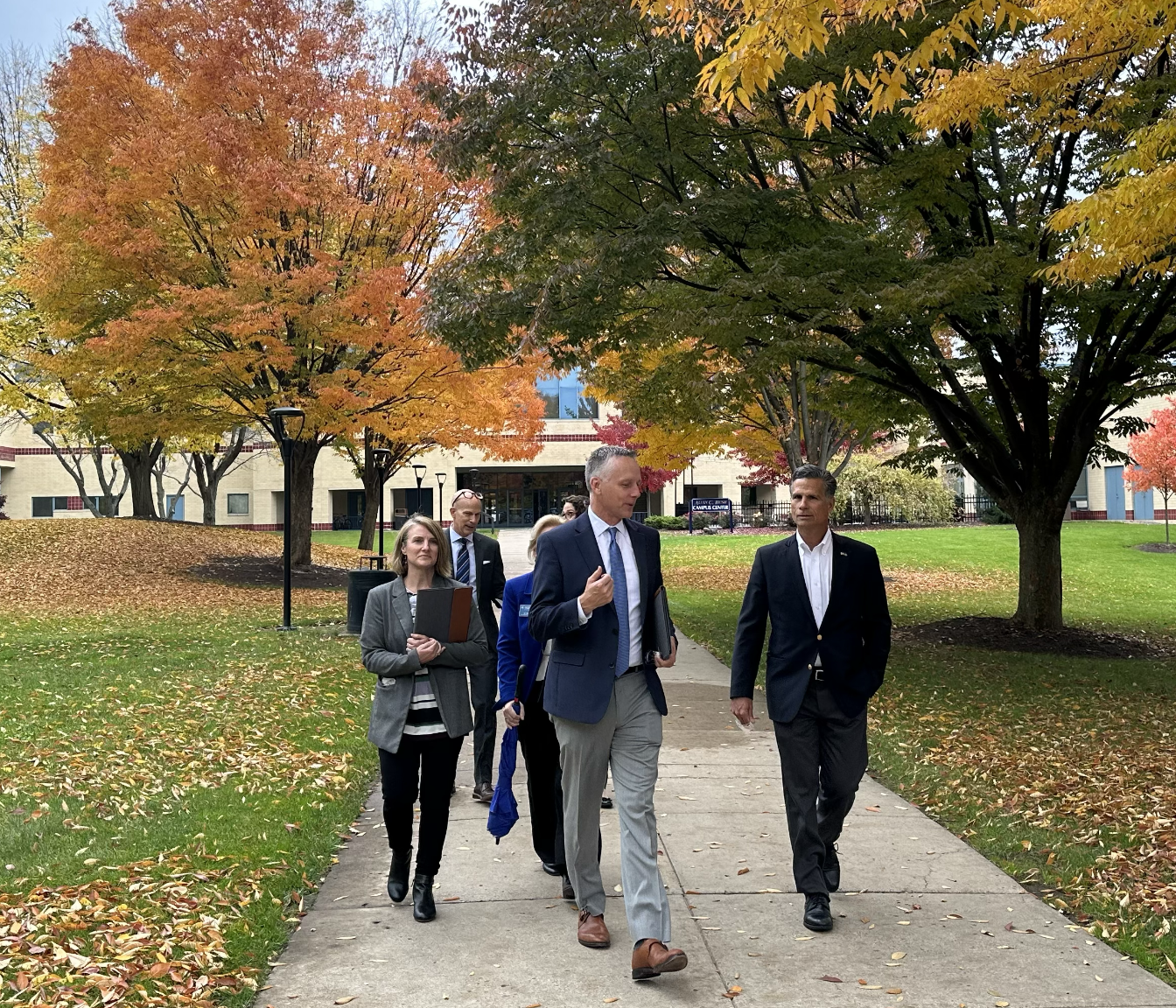 Later in the day, I joined the Schuylkill County GOP at their fall dinner. They had a very well-attended dinner, and I had the opportunity to discuss the importance of this election and why winning back the U.S. House is so vital. Thank you to Chairman Howie Merrick for always putting together a great dinner. 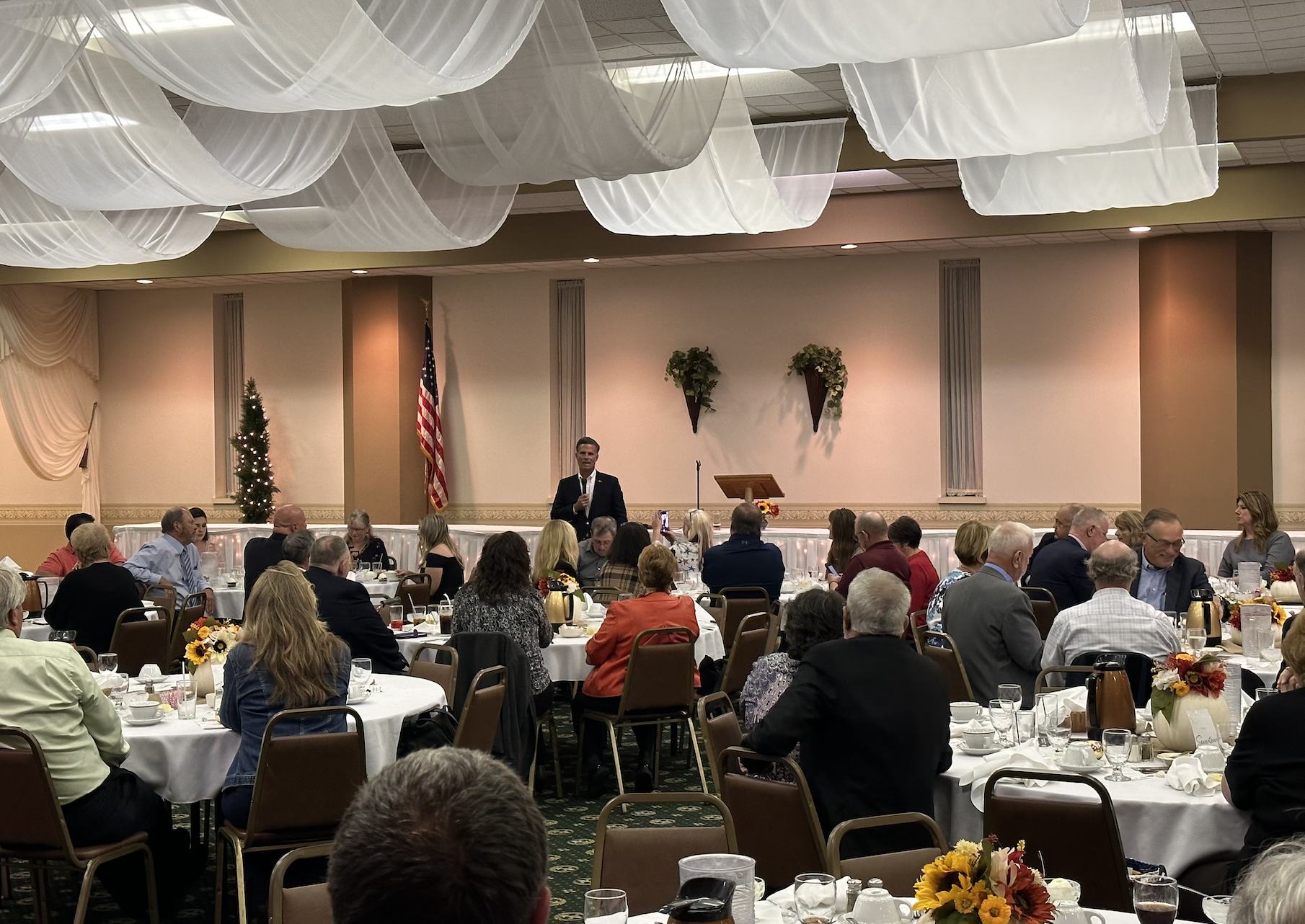 On Thursday, I had the great honor of welcoming former Vice President Mike Pence to northeast PA, where we joined a group of incredible people for a roundtable discussion and luncheon. We got the opportunity to discuss the current difficulties facing our nation and get his point of view on many topics. Having Vice President Pence in northeast PA again was meaningful as we rallied support for all our Republican candidates heading into Election Day, November 8th. 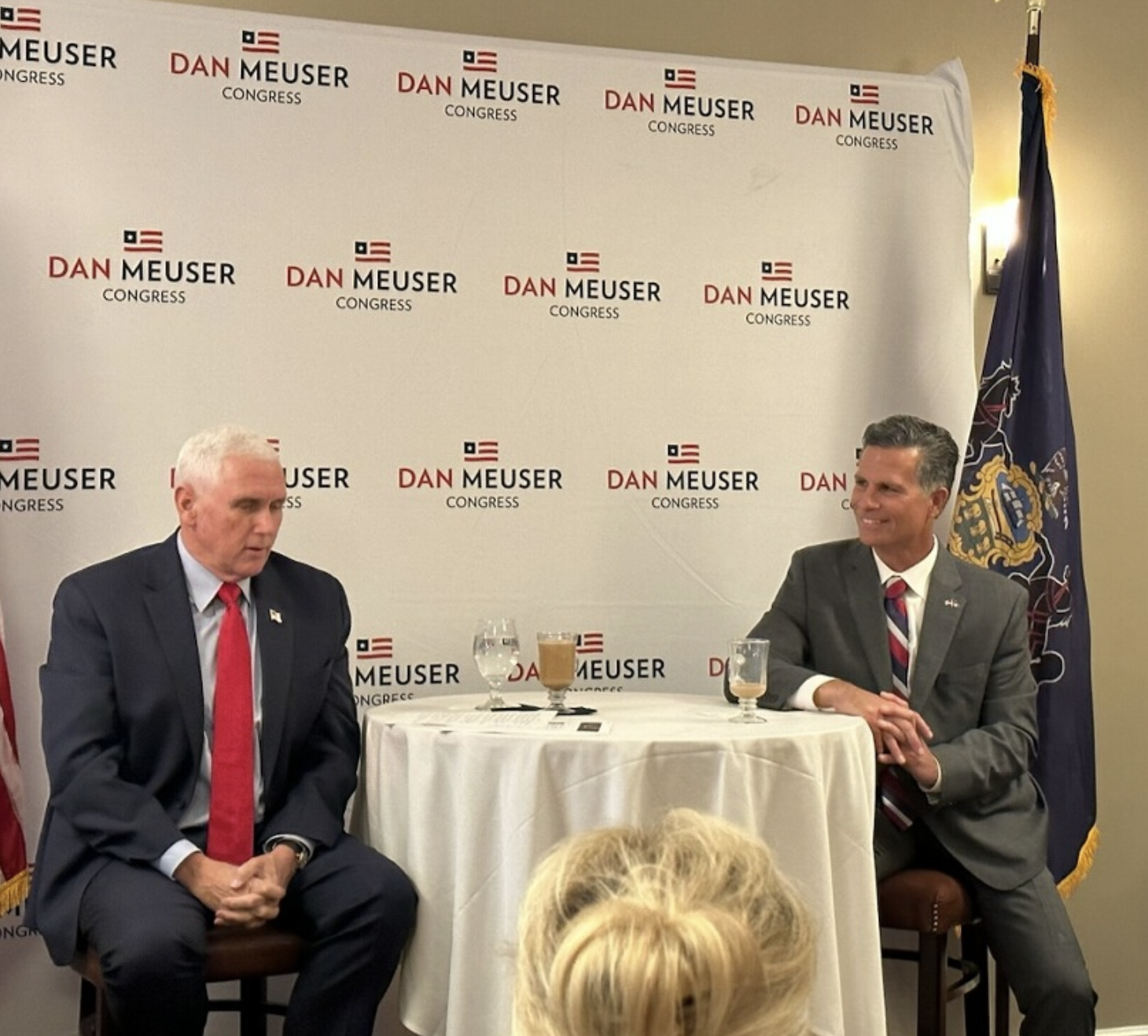 After our luncheon, I was joined by Vice President Pence and the congressional candidate for the 8th District, Jim Bognet. We spoke with the media about the importance of winning the upcoming election. It's critical we get Republicans elected from the State House and Senate to Congress, all the way up to the U.S. Senate and the Governor's office. Click here to read more from the Wilkes-Barre Times Leader. 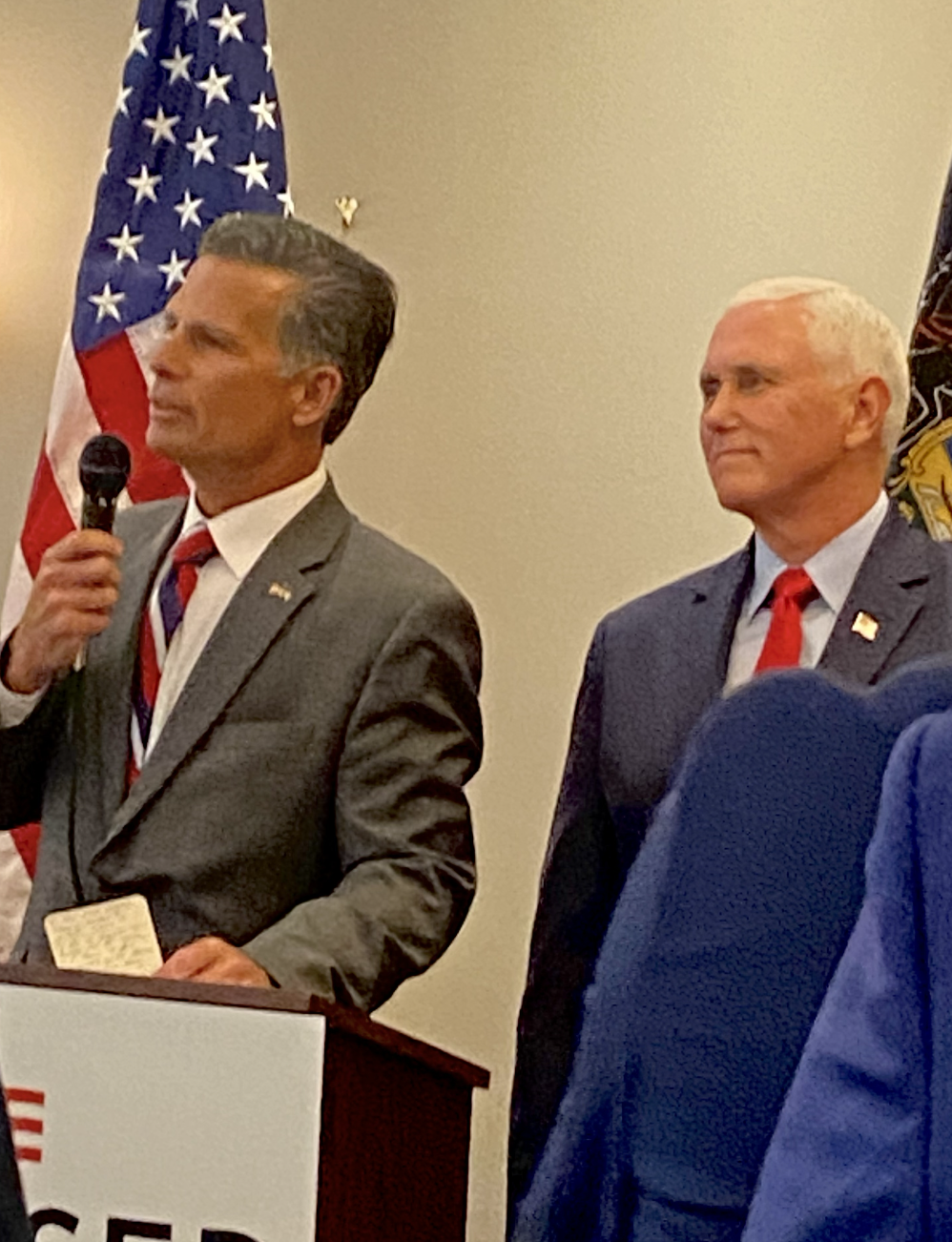 I attended the Bold Gold Broadcast & Media Foundation's 7th Annual dinner on Friday at the Mohegan Sun Casino. I presented a citation to Bill Rosado, Atlas Award recipient. Thanks to Vince Benedetto, CEO of Bold Gold Media Group, for his leadership of this great event and organization. 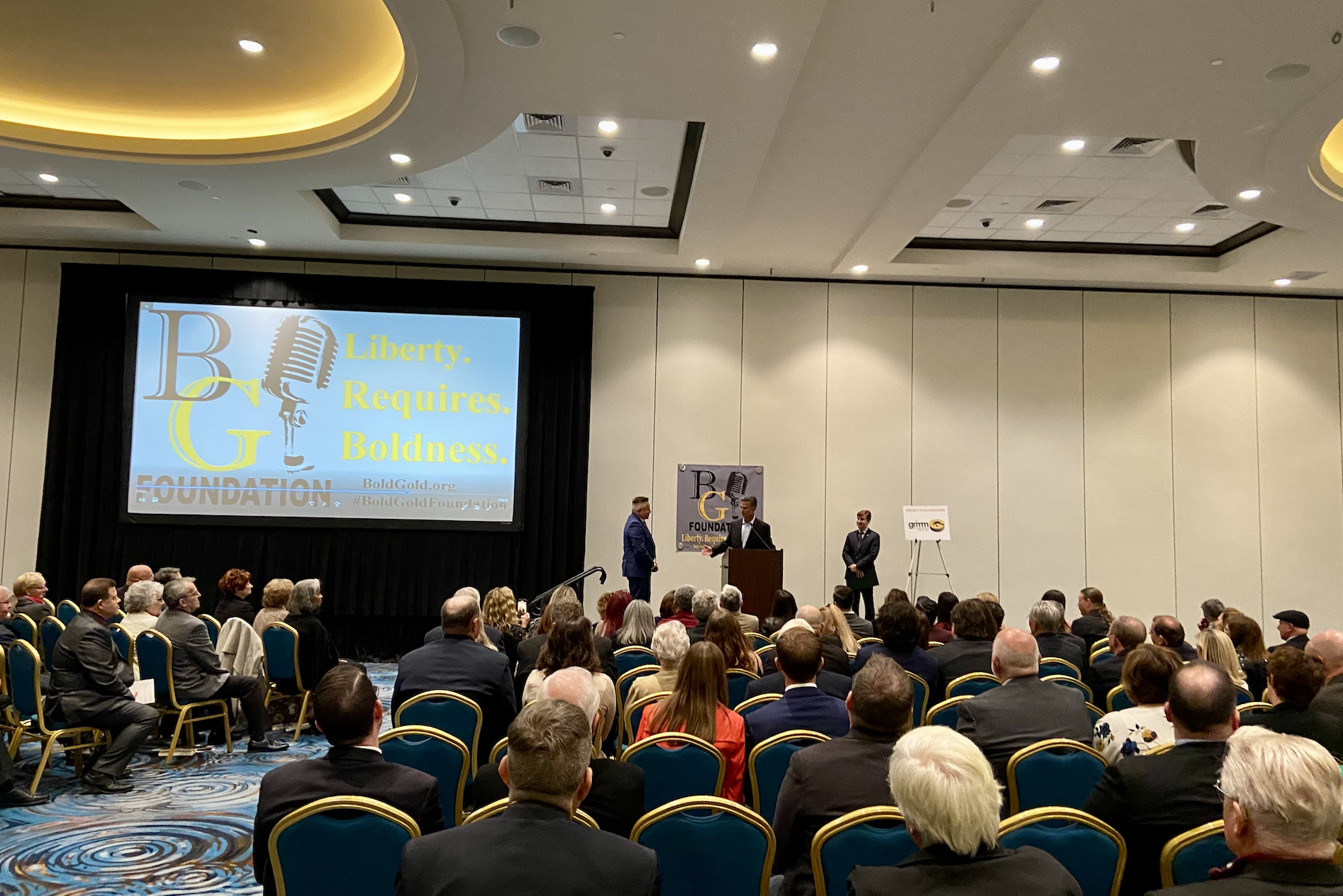 IN NEWS YOU WON'T HEAR IN WON'TAINSTREAM MEDIA: This week, Joe Biden suggested that people should vote in the midterms based on inflation. 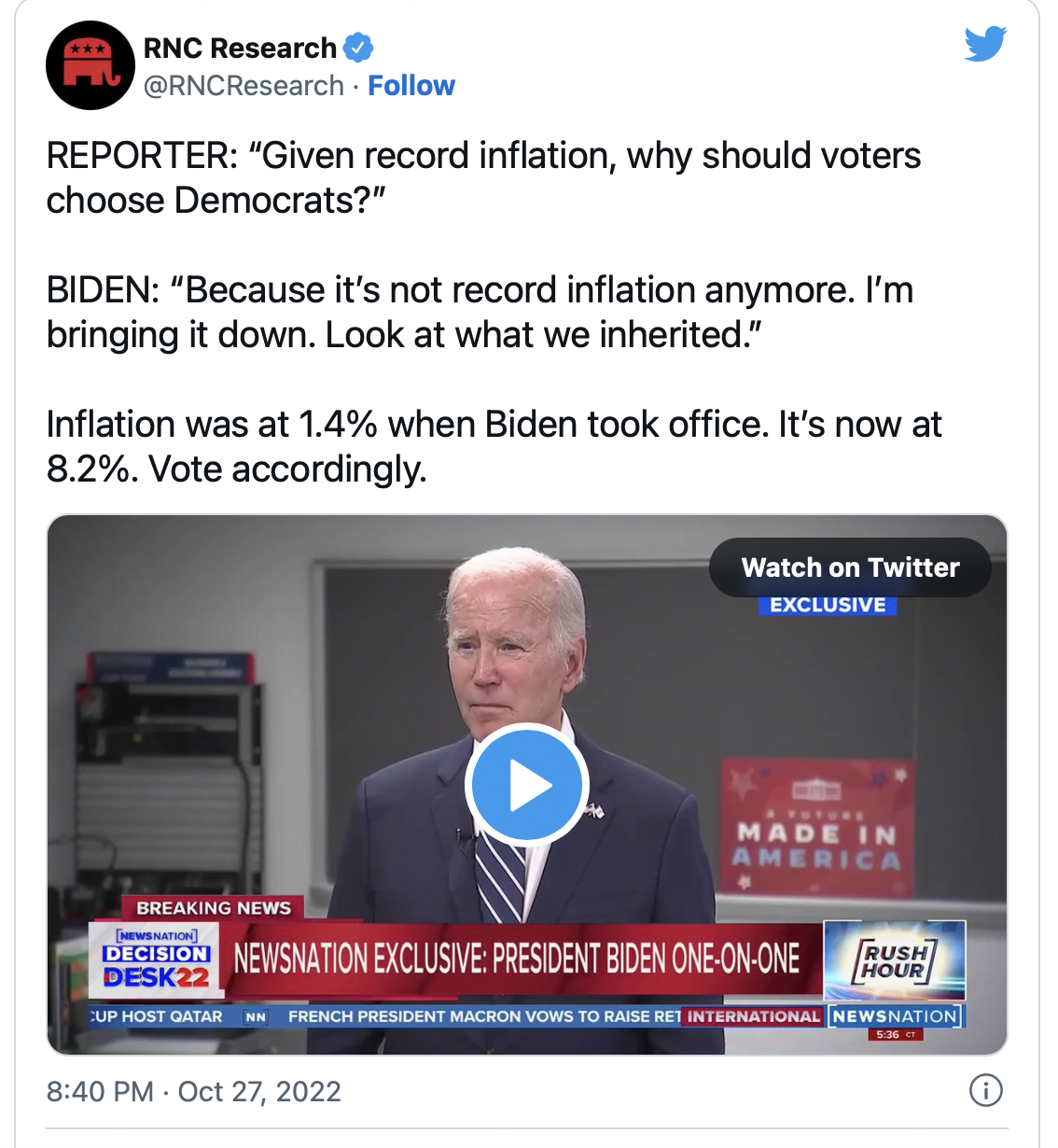 He’s not making the argument he thinks he’s making. When Biden took office, inflation was at 1.4%. Now it’s at 8.2%, and even liberal economists blame his policies. 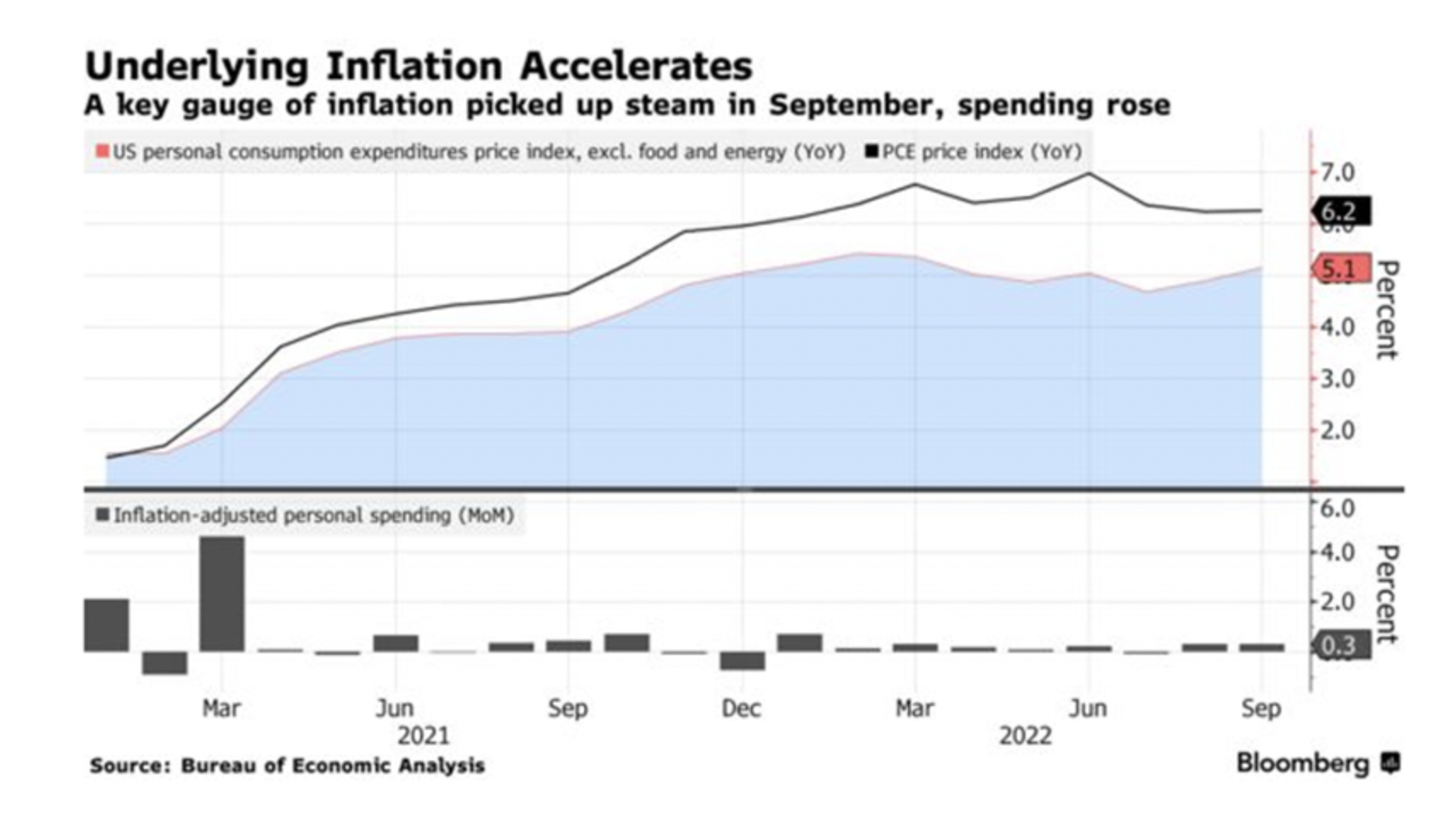 This week, the Commerce Department released the latest PCE index – the Fed’s preferred measure of inflation – and it remains at astronomically high levels. Core PCE, which strips out food and energy, accelerated in September, “indicating widespread price pressures.”

So when you head to the ballot box, remember to vote on inflation… Remember that Biden and Biden Democrats fueled inflation with their reckless spending, lied about it, and now refuse even to recognize their mistakes.

The worst part about the recession is that rather than change course and drop the big-government, massive government spending agenda and policies that helped create this mess, Biden and Biden Democrats are doubling down. It's almost as if they have accepted that a recession is coming, and their answer to the American people is to grab an umbrella and prepare for bad weather. It's irresponsible and an indictment of their poor leadership. Fortunately, Election Day is nearly here, and the Biden Democrats are about to be graded. 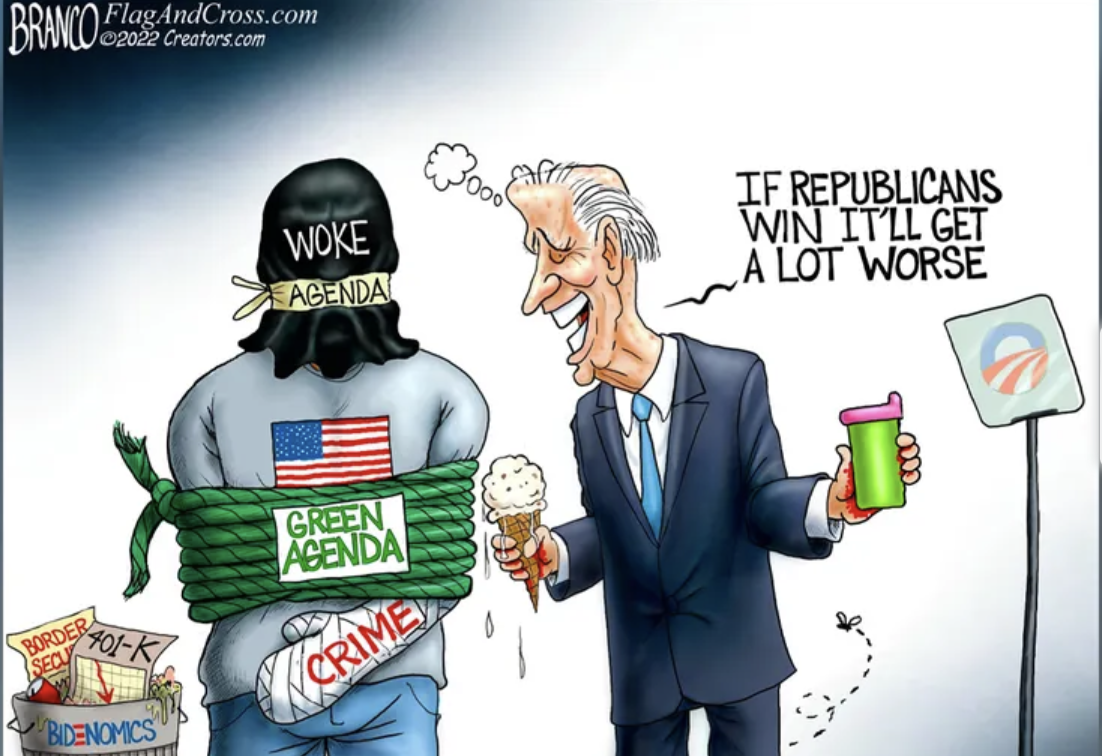 As we close in on Election Day, I want to highlight a few additional GOP congressional candidates to whom I want you to pay close attention and support as we work to deliver big Republican victories on November 8.

First, one of the races that continues to look favorable for Republicans in Pennsylvania is in the 17th District, which surrounds Pittsburgh. Our candidate is Jeremy Shaffer, a successful businessman, and a strong conservative. Jeremy has his Ph.D. in Electrical and Computer Engineering from Carnegie Mellon. He co-founded a small business that is helping to fix our crumbling infrastructure. Jeremy will be a great addition to U.S. Congress, and we must do everything we can to get Jeremy across the finish line. Click here to learn more about Jeremy's campaign.

Another great GOP candidate running in Pennsylvania's 12th Congressional District is my friend Mike Doyle. Mike is also a successful businessman, having 31 years of experience in the insurance industry. In addition, In addition, Mike has served as a local council member in Plum Borough and understands the importance of fiscal responsibility, removing all barriers to American energy production, and securing our border, which is being inundated by illegal immigrants and fentanyl. Mike's race is gaining national attention and could be a big upset on Election Night. Click here to learn more about Mike and his campaign. 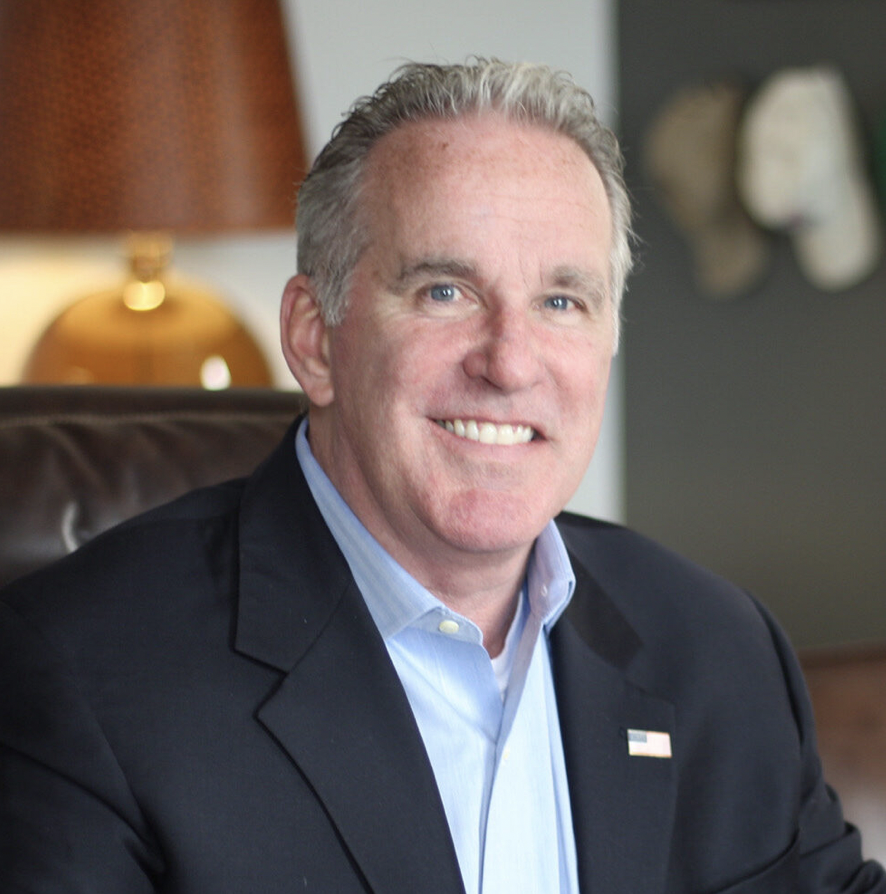 Finally, I want to highlight my good friend Guy Ciarrocchi, our GOP candidate for Pennsylvania's 6th District. Guy most recently served as President & CEO of the Chester County Chamber of Business and Industry. Guy served as a leader in the #VoteYes campaign to reign-in unchecked gubernatorial power, restore "checks & balances," and ensure that citizens are involved in decisions that regulate their lives and livelihoods. Click here to learn more about Guy's campaign. 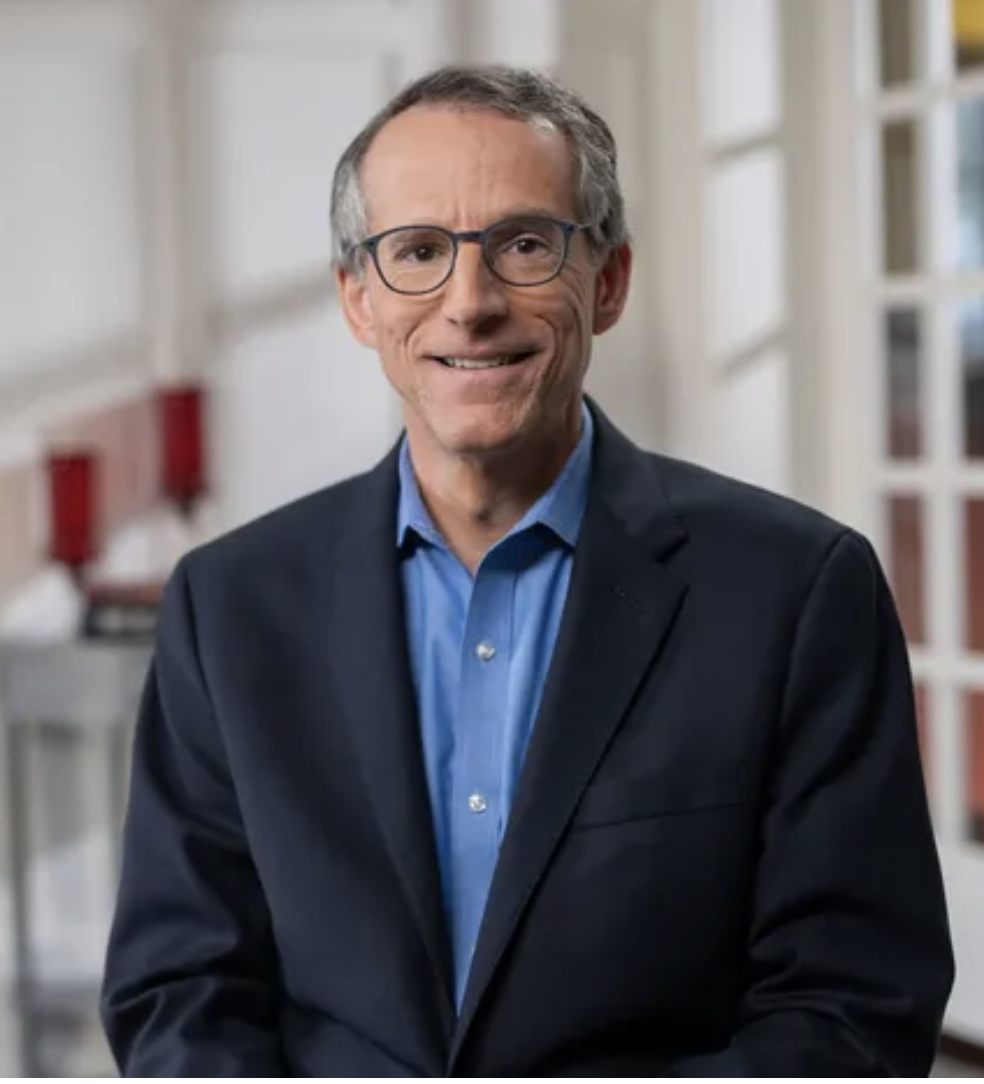 Lastly, I wanted to share with all of you a great opportunity in Luzerne County for students looking to earn some scholarship funding. The Republican Women of Luzerne County are awarding a $1,000 scholarship to a young Republican for the Spring 2023 semester. Entries must be residents of Luzerne County, registered Republican voters, and enrolled and in good standing at an accredited U.S. college or university. To apply, you must complete an application form, write a 500-word essay, send a headshot and attend a Republican Women's meetinWomen'set sponsors. All applications are due on November 1, 2022. If you are interested in participating or would like to submit your information, please email Chair Linda Shypulefski, at [email protected].

Election Day is just over a week away. There is much at stake. The economy, the border, national security, energy policy, crime... everything Biden and his Democrat backers have touched, they have made worse for America.

There is only one solution. First, we must win back U.S. Congress and retire Speaker Nancy Pelosi once and for all. Next, we must elect Dr. Oz to the U.S. Senate and Doug Mastriano to the Governor's office; re-electing strong Republican majorities in Harrisburg is critical. Electing Republicans is our path to restoring an agenda that puts both America and Pennsylvania First. Republicans have a plan, The Commitment to America... A plan to get our country back on the right track and will make our country Stronger, Safer, More Free, and will hold our government more accountable to you. So please tell your family, friends, and neighbors to get out and vote. We need a RED WAVE on Tuesday, November 8, 2022.