Good evening and welcome to our 2020 Year-End Update.

When I ran for U.S. Congress in 2018, I promised that I would be open, transparent and communicate directly with all of you on a regular basis. Serving in Congress is not an "I" effort, but a "WE" effort. That is why each week, I make it a point to send out a weekly update recapping the latest news and recap the work we are doing on behalf of our District, Commonwealth and our nation.  I hope you enjoy these weekly updates and be sure to keep up with our latest activities by following us on Facebook and Twitter.

Like me, the President is a businessman. He understands what it means to sign the front of a paycheck and he made decisions and put together an agenda that helped the United States economy reach heights not witnessed in the modern era. Reducing taxes, eliminating unnecessary regulations and negotiating pro-American trade deals led to record low unemployment and a bustling economy. Even after the pandemic forced the President to shut down large sectors of the economy temporarily, he already has the economy on the road to recovery.

Many expected it would take our economy years to recover. Instead, we have seen an unprecedented rebound only limited by the draconian lockdown efforts on small businesses by blue-state governors. Want proof? A few months ago, our nation's GDP grew at a 33.1% rate in the third quarter of 2020. That is the fastest rate of growth in our nation's history.

This President has accomplished more over the past four years than many have done in eight.

Unfortunately, the legacy of this past election is the unlawful actions that took place related to our electoral process, particularly in Pennsylvania. Many voters in Pennsylvania are angered about the irregularities that occurred in the past election. There are valid reasons for the distrust they feel, rooted in the numerous election processes and procedural changes enacted by the Governor's administration and the Secretary of State outside of statute.

These unlawful actions include, but are not limited to:

These unlawful actions were taken without the authority or consent of the Pennsylvania state legislature. These are facts, and they are indisputable.

Every illegal or improperly counted ballot cancels out the vote of a legal citizen. One thing is clear: we need tighter election security to protect legal votes.

On Thursday, I was joined by eight of my fellow Pennsylvania Congressional colleagues on a joint release outlining our many concerns. Click here to read an article in the Wilkes-Barre Times-Leader that highlights our actions and links to the joint statement.

The year 2020 will forever be remembered for the challenges we were forced to confront resulting from the Covid-19 pandemic. The horribly contagious virus, originating in China, traveled around the globe, infecting tens of millions and killing millions. I know many of you personally felt the loss of a family member, friend or neighbor to this virus.

Just as Americans have done throughout our nation's history, we stepped up and continue to step up to meet this challenge. At the very beginning of the pandemic, President Donald J. Trump immediately initiated a travel ban on those traveling to the United States from China. This action saved countless American lives. The President and his team, led by Vice President Mike Pence, put together an unprecedented response effort. They successfully delivered personal protection equipment (PPE), ventilators, increased testing, military personnel and temporary hospital space and beds to respond to the pandemic. The President's crowning achievement has been Operation Warp Speed.

Upon its formation, Operation Warp Speed's goal was to produce and deliver 300 million doses of safe and effective vaccines with the initial doses available by January 2021, as part of a broader strategy to accelerate the development, manufacturing, and distribution of COVID-19 vaccines, therapeutics, and diagnostics.  As you know, President Trump and his administration were able to get vaccine doses to the public in December, a full month before their already aggressive timeline. Many in the mainstream media predicted (or hoped?) that it would take TWO years for a vaccine. The mainstream media has continuously downplayed the President's successful efforts to protect American lives.

Our nation has and continues to be tested, but President Trump has delivered.

Thanks to your support, we were successful in earning a second term in office on Election Day. I promise to continue to fight for the best interests of our District, our Commonwealth and our nation.

One way we can all do that is by supporting the GOP U.S. Senate candidates David Perdue and Kelly Loeffler in Georgia. The election will take place on Tuesday, January 5. These elections are a battle for majority control of the U.S. Senate. If the Democrats win, they will be one step closer to implementing a socialist, big-government agenda. This election is about socialism vs. freedom.

There are ways to help... even from Pennsylvania.

I would encourage you to support the grassroots efforts in Georgia. That can be done from right here at your own home by participating in phone banking. Click here and submit your name, email, and phone number and an NRSC representative will contact you to get you trained and started on the phone banking app.

Additionally, I have made a personal donation and a donation from our campaign fund of $35,000 to the Georgia Battleground Fund. If you would like to donate further to these very important elections, please click here. 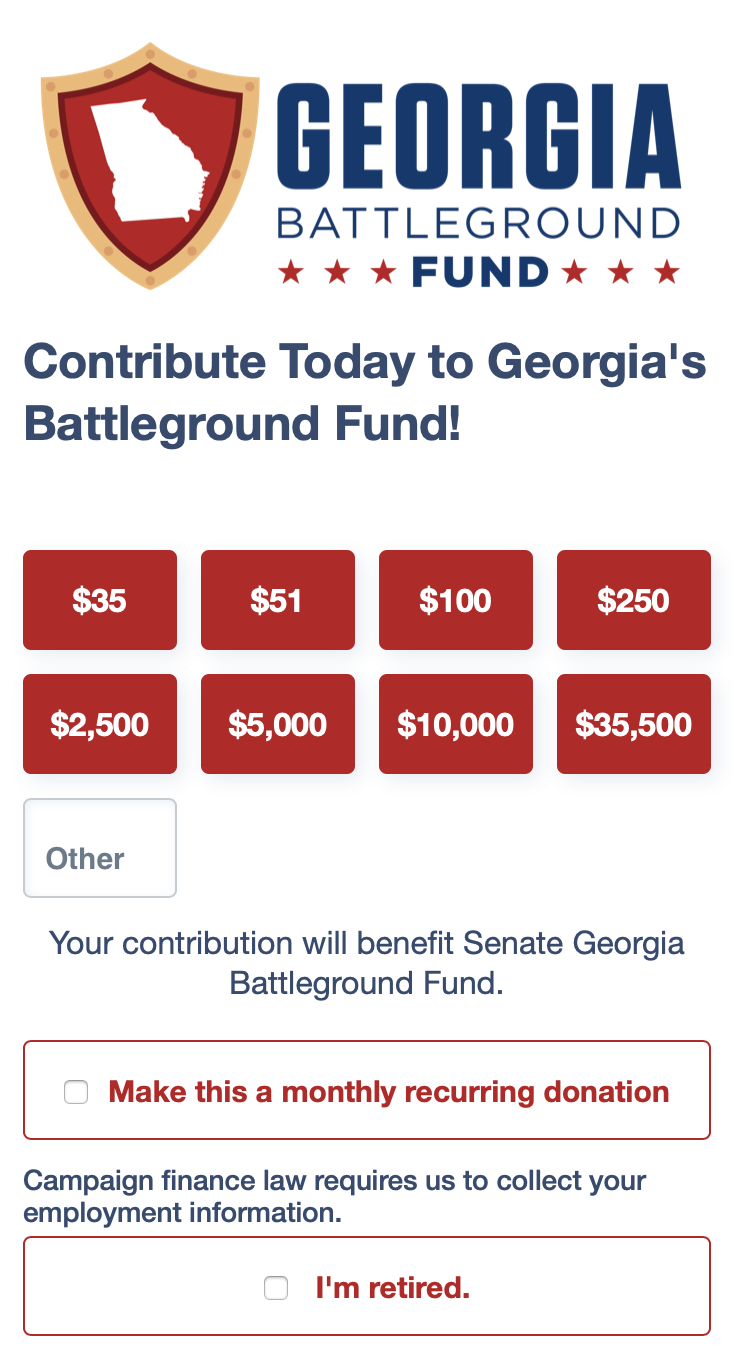 Today was swearing-in day on Capitol Hill. We have a number of great freshmen GOP congressional members. Our GOP delegation gained at least nine new members. Here I am pictured below with Burgess Owens. I’ve got his Raider Super Bowl ring on.. ran off with it. He’s not that fast anymore. All joking aside, happy to have Congressman Owens on our team! 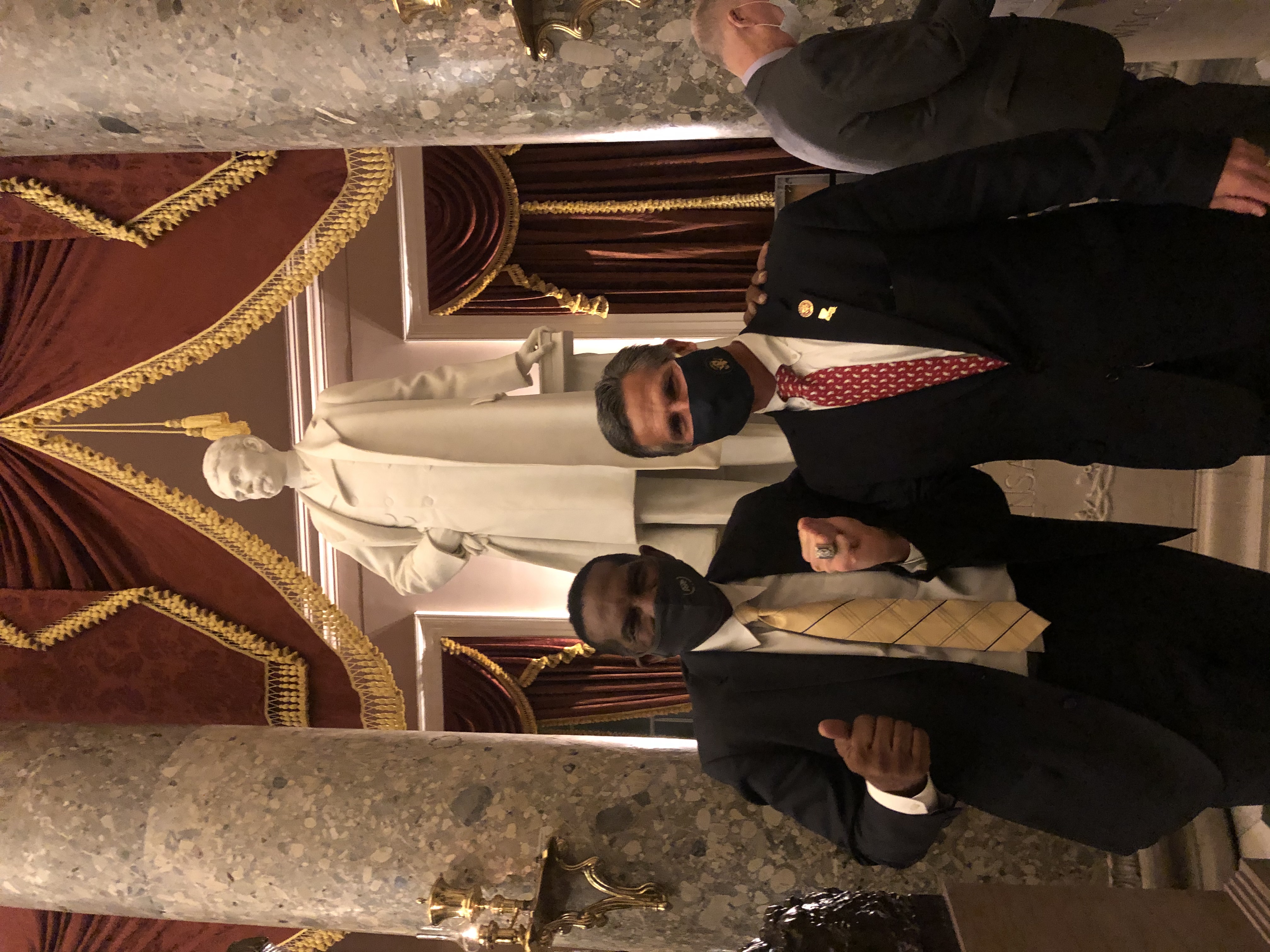 We sadly lost two great Pennsylvania leaders over the past few days.

Former Pennsylvania Governor Dick Thornburgh, a tremendous leader, passed away last week. He was a dedicated and accomplished public servant who had a long and distinguished career. In addition to serving as our Governor, Thornburgh served as U.S. Attorney General and United Nations Under-Secretary-General.

Tragically, we also lost State Representative Mike Reese, a member of House Leadership. Mike was a dedicated and rising leader in the State House and our Republican Party.

Our deepest sympathies and prayers are with each family as they grieve these tremendous losses.

Be sure to look out for our update next week and best wishes for a happy and healthy 2021.