I hope everyone enjoyed a happy and healthy Labor Day with family and friends. Last Saturday, we stopped by Hamburg for the Taste of Hamburger Festival. It was a great event and we were pleased to be joined by my great friend and Hamburg Mayor George Holmes. Pictured below with Shelley and I are Mayor Holmes, Donna Lee Merritt, Berks County GOP Commissioner Nominee Mike Rivera and Berks County GOP Nominee for County Recorder of Deeds Mary Kozak. This picture was taken on the porch of the Holmes' beautiful Bed and Breakfast called The Bismarck. 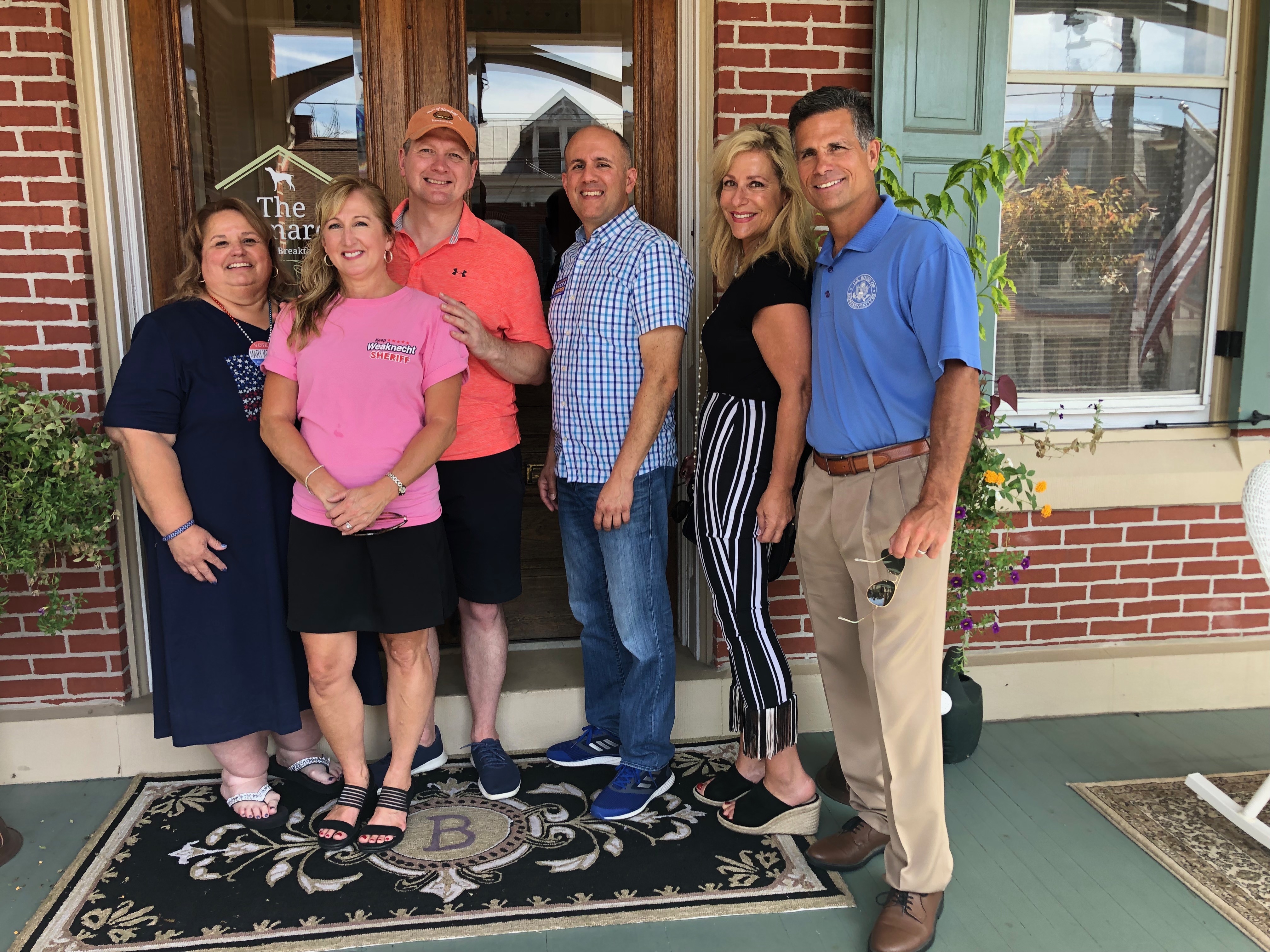 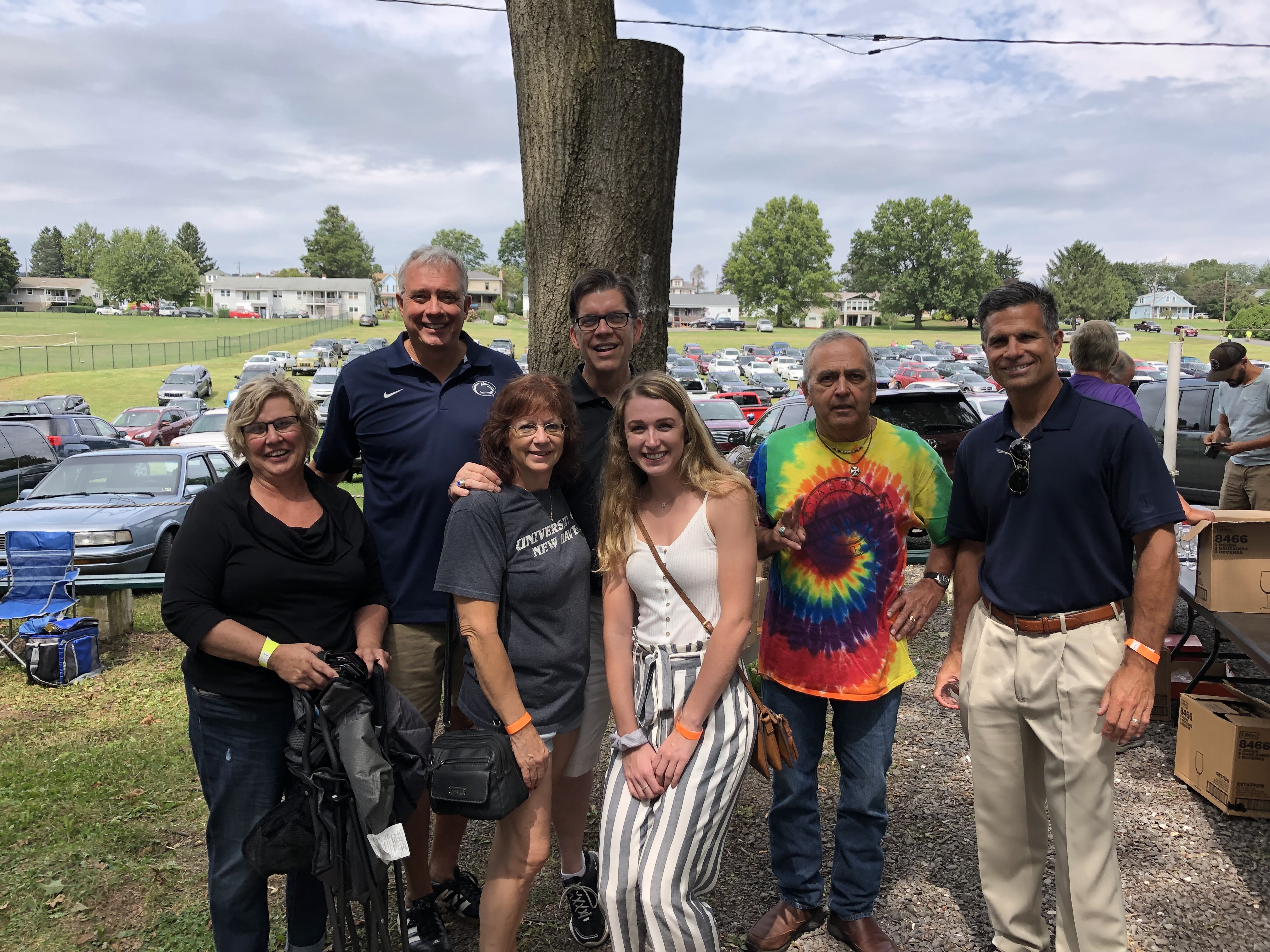 On Monday, we spent time at the All Homes Day One Hundredth Anniversary in Elysburg with State Senator John Gordner and State Representative Kurt Masser. This annual celebration began in the autumn of 1919 to welcome home World War I troops and has continued throughout the years to honor all veterans. Pictured below on stage with Senator Gordner and Representative Masser. 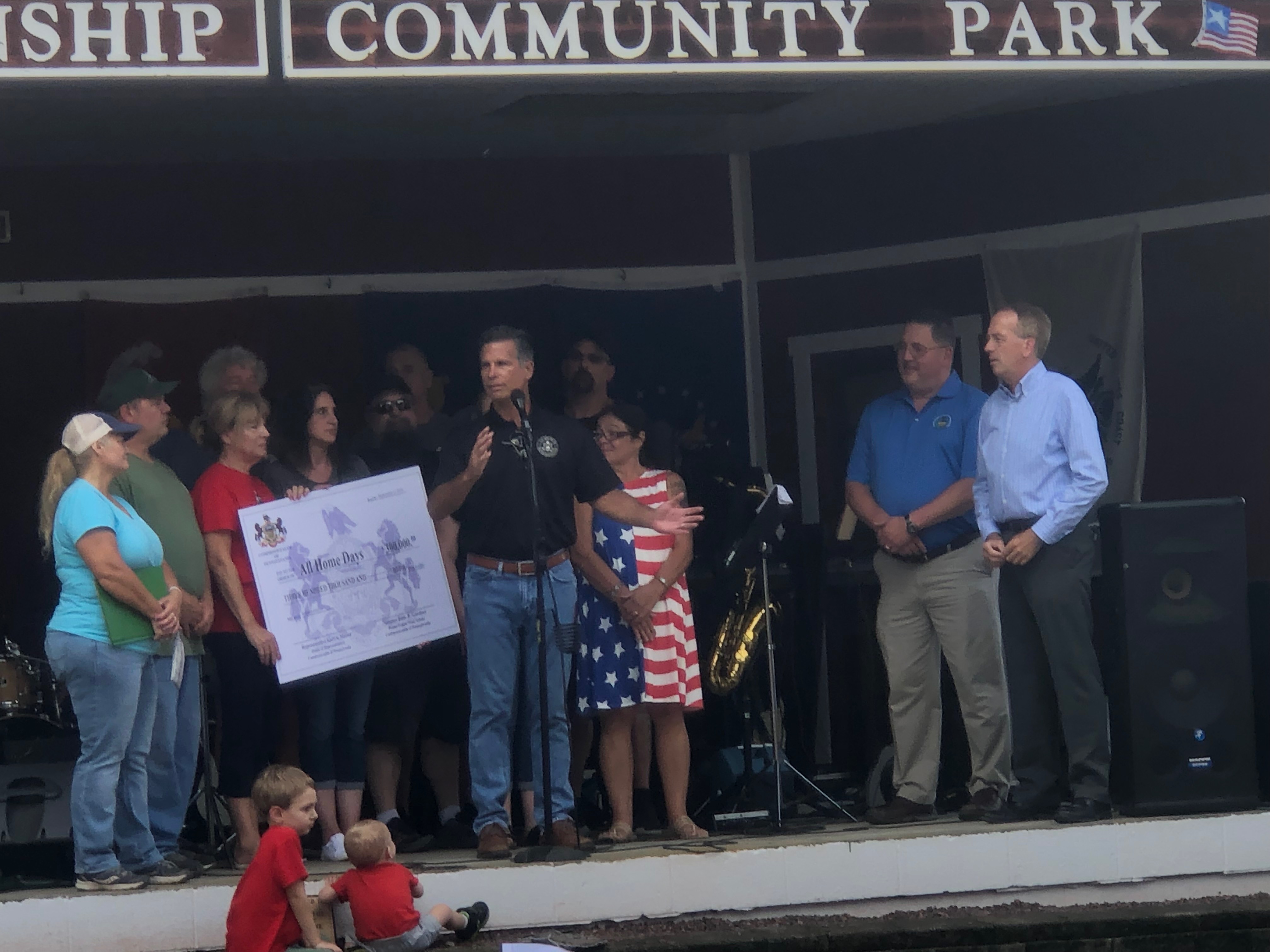 On Tuesday, we hosted a forum on Opportunity Zones with State Senator Gordner, State Representative Masser and representatives from the U.S. Small Business Administration Mid-Atlantic and Curt Coccodrilli from the U.S. Department of Agriculture Rural Development to discuss paths to revitalization with a focus on the unique needs of our District. Click here to read a story regarding our forum by The Daily Item. 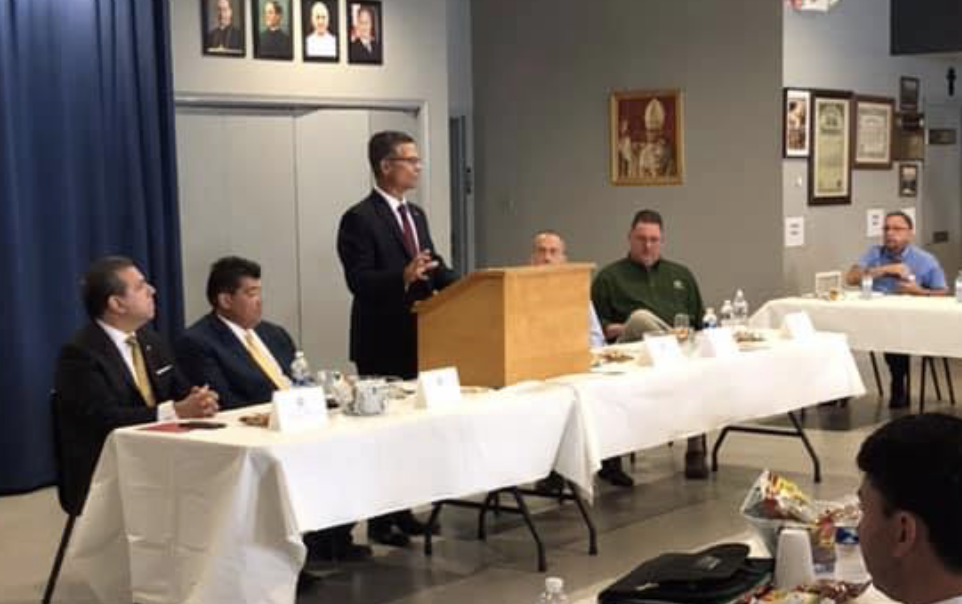 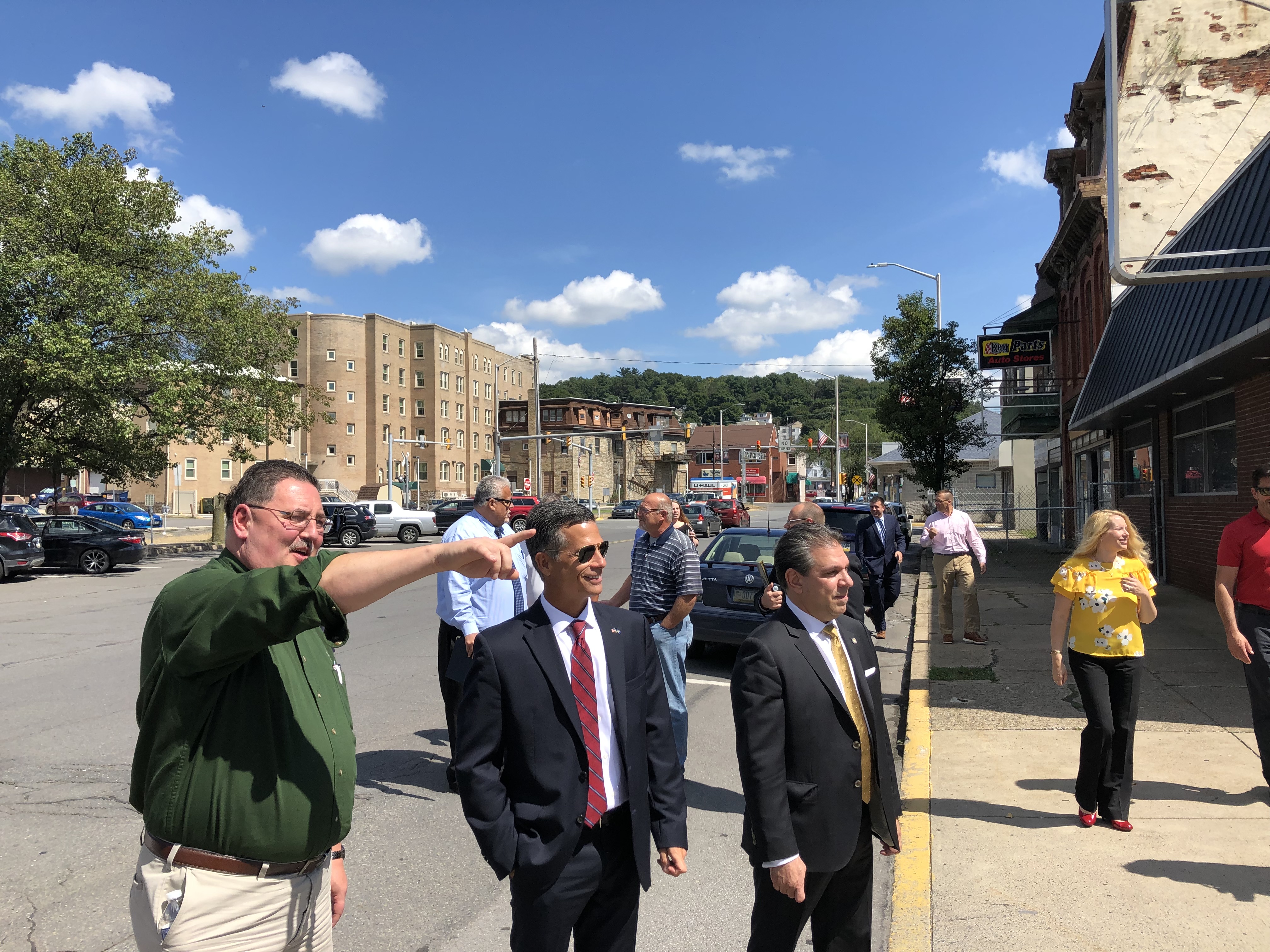 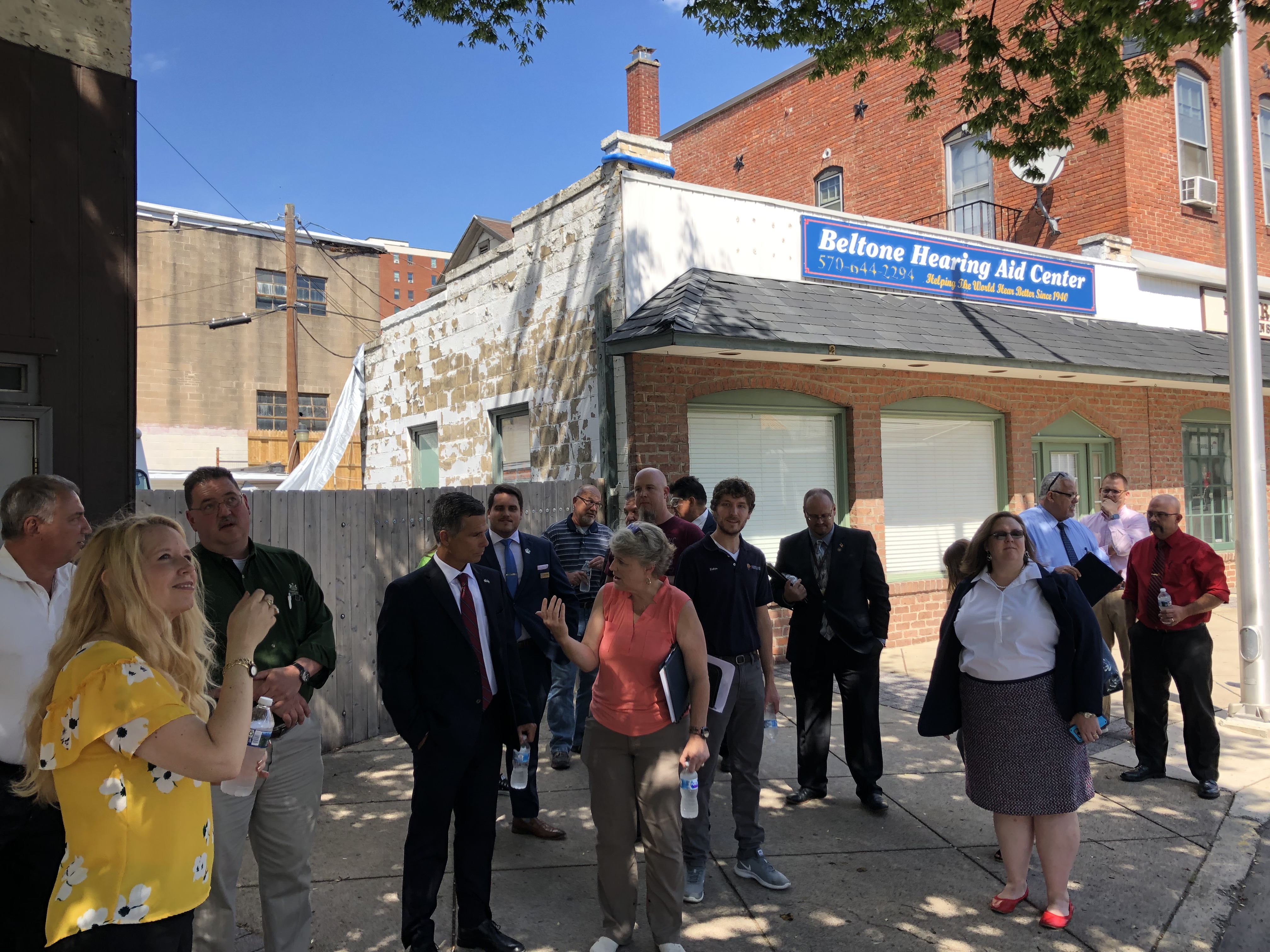 We then recorded a radio interview with WKOK in Sunbury later in the week. We spoke about opportunity zones and other important national issues facing our country. Click here to read a recap.

On Wednesday, we recorded a segment on the Volpe Report of Fox 56 to discuss the latest issues in Congress. Once that video is made available, we will share.

Later, we attended a roundtable with Better Care America in Luzerne County. We were joined by Dr. John Ash of Misericordia University, Bill Leandri from the Black Mountain Chamber of Commerce, Eric May of May Brands, Chet Mozloom of The Lands at Hillside Farms and Cor Catena of Commonwealth Health System. The event was moderated by our good friend Kevin Harley. We spoke about the importance of employer-provided coverage for all communities and ways we can improve the treatment and affordability of our health care. We look forward to working with Better Care America as we look to improve our health care system. 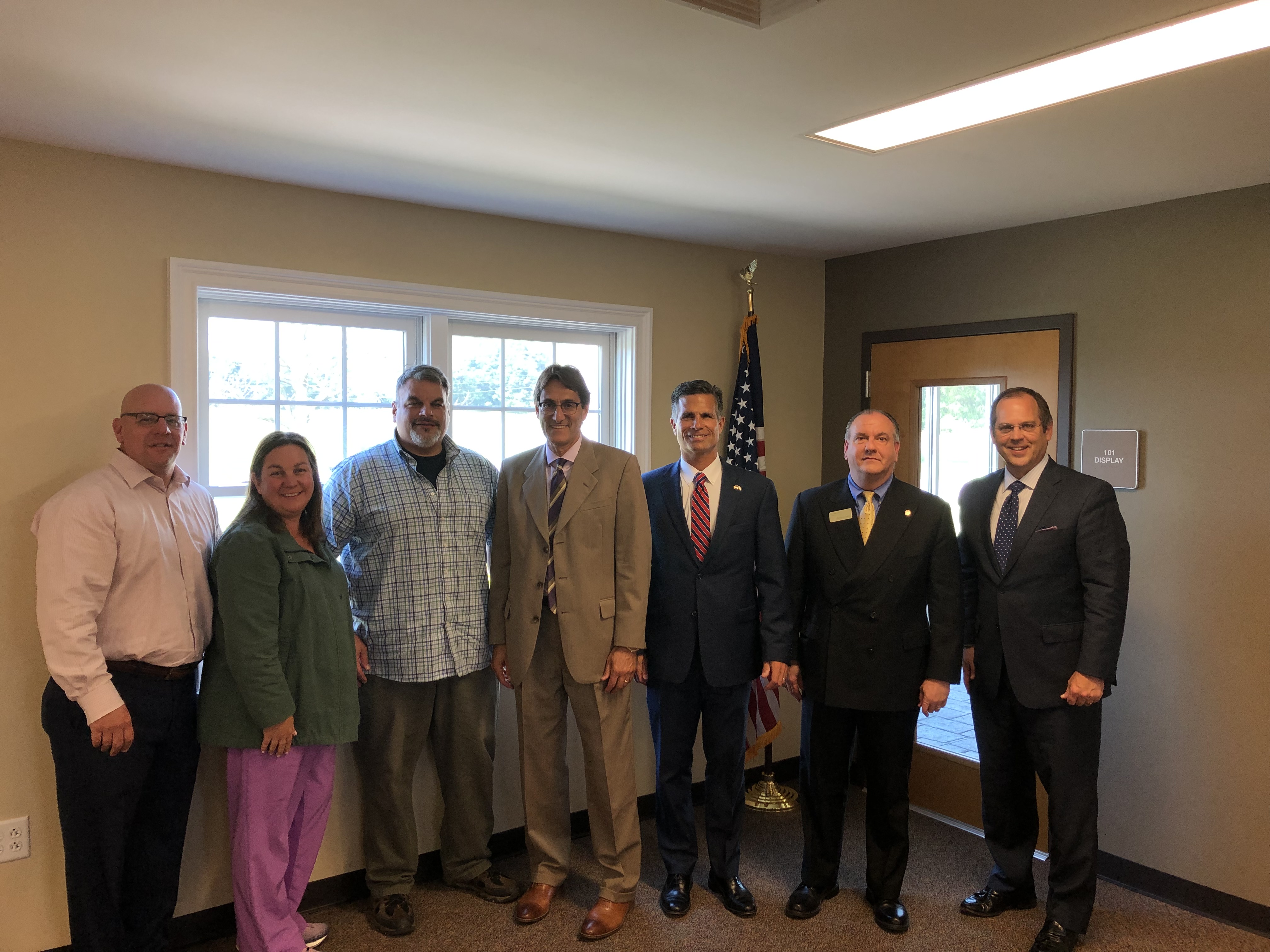 We then traveled to Dallas, PA to accept an award from Marsy’s Law. Marsy’s Law is named after Marsalee (Marsy) Ann Nicholas, a University of California Santa Barbara student, who was stalked and killed by her ex-boyfriend in 1983. Only one week after the horrific murder, Marsy’s family was confronted by the murderer in a local supermarket. The family received no notification from the judicial system that Marsy’s murderer had been released on bail mere days after her murder. Marcy’s brother, Dr. Henry Thompson “Nick” Nicholas III helped to push the Marsy’s Law initiative in California and other states to implement a Victim’s Bill of Rights Act. I am a strong supporter of this legislation as the accused have rights, so must victims. I support the Pennsylvania legislature’s efforts, HB 276, which would ensure the Pennsylvania Constitution enumerates rights for victims of crime. Pictured with Janet MacKay (Executive Director of Victims Resource Center), Madison Scarfaro, Thomas Mosca (Co-Chair of NEPA Human Trafficking Task Force) and Jen Dotzel (Outreach Supervisor at Domestic Violence Service Center). Not pictured, but present were Sherry Castrine (Director of Development at Domestic Violence Service Center). 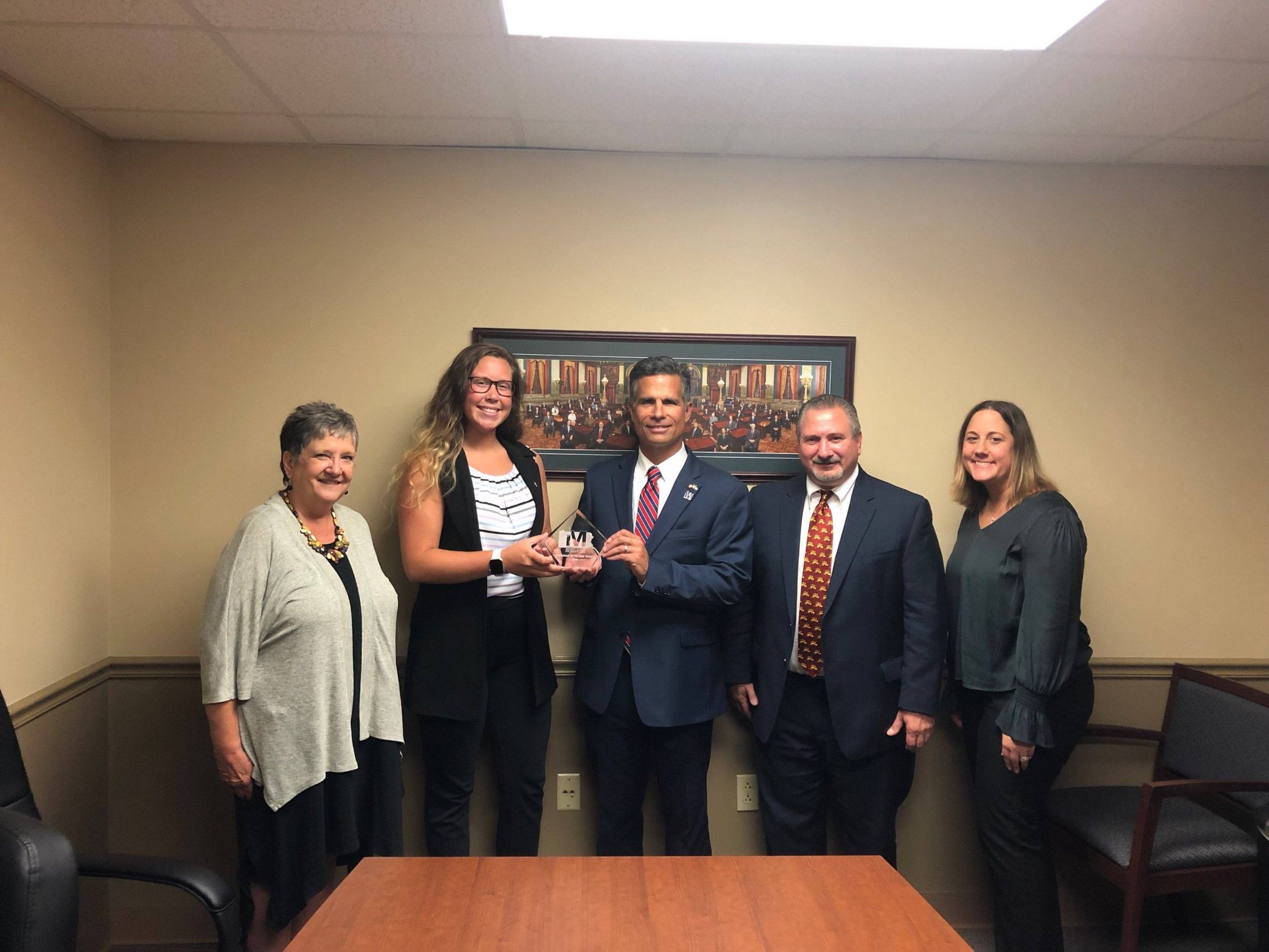 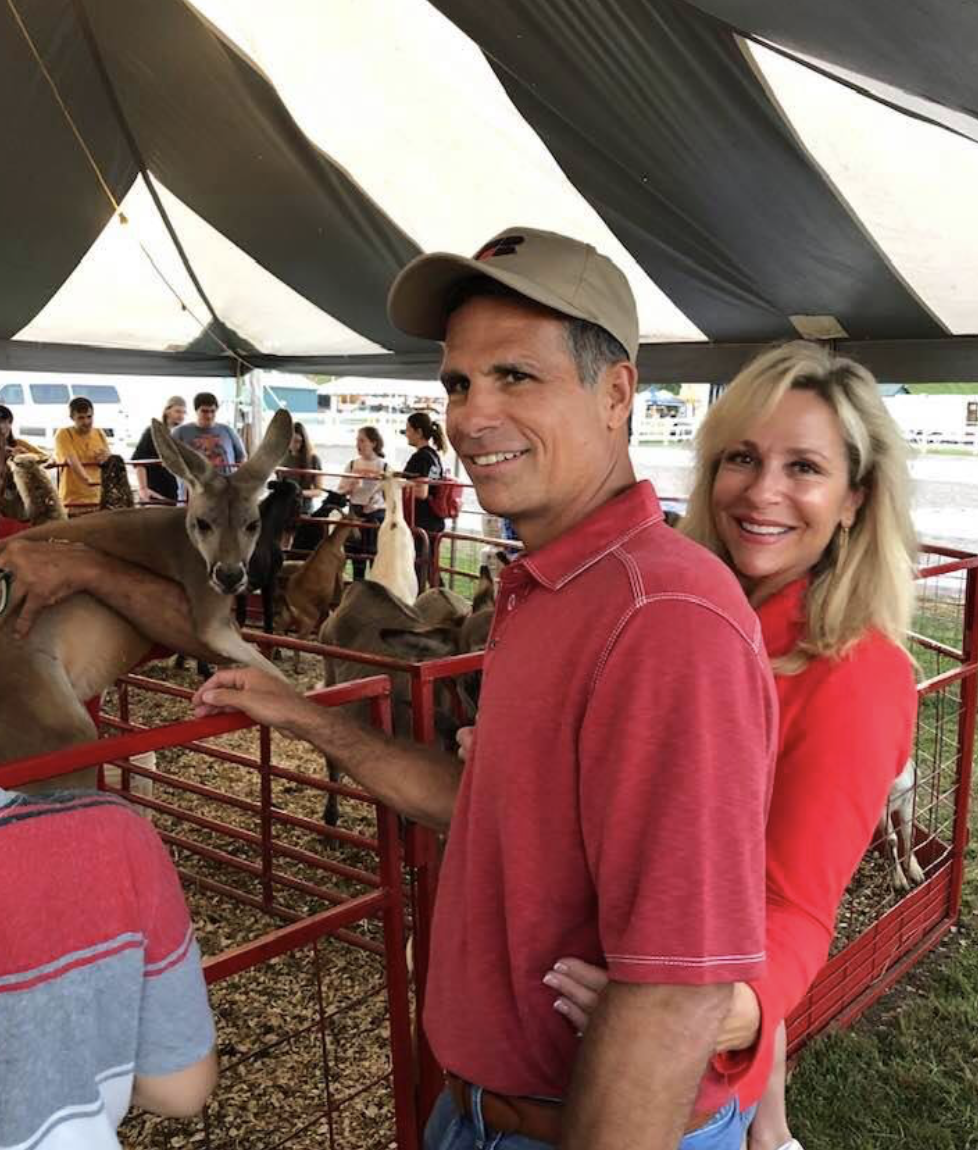 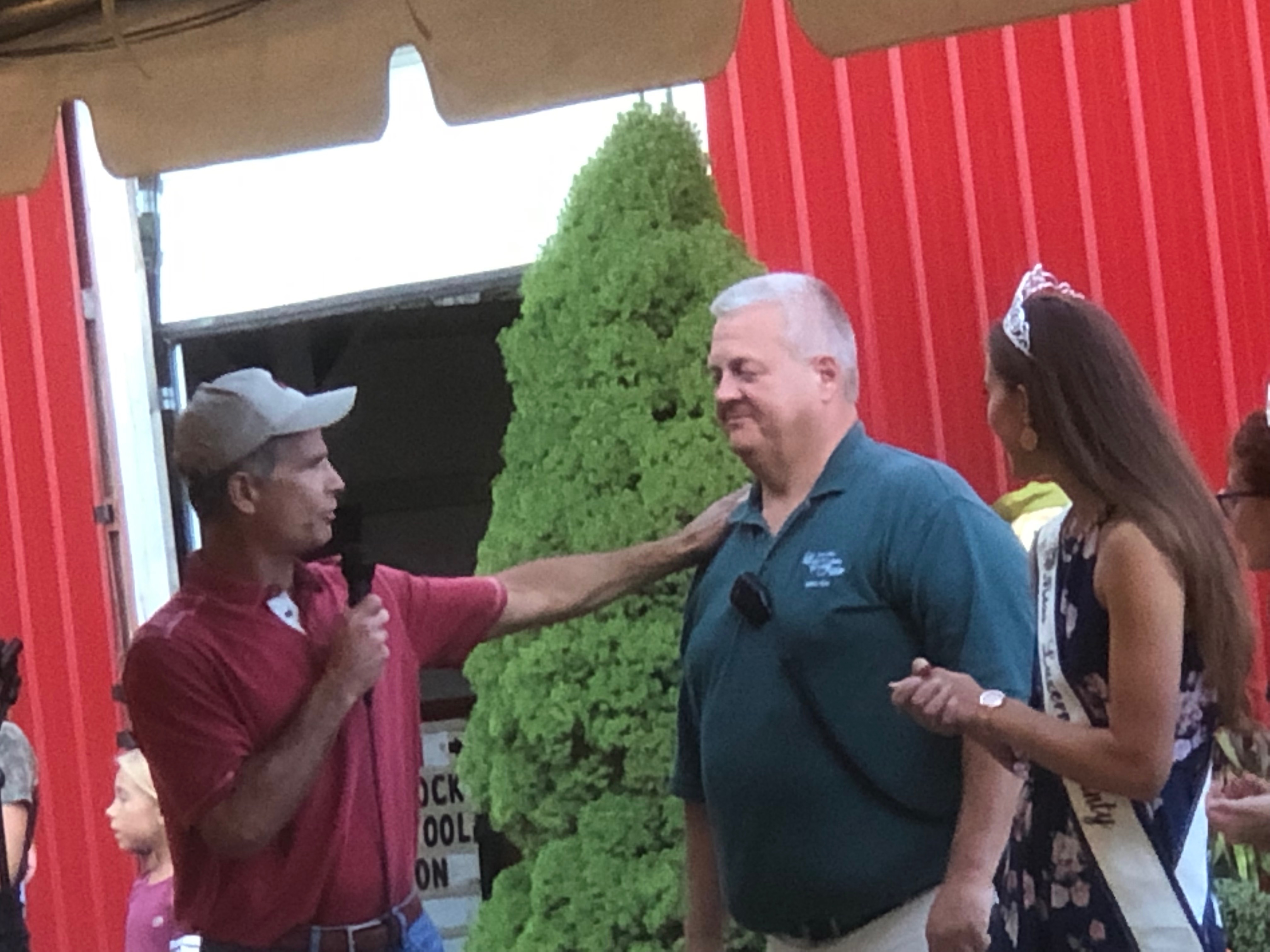 On Thursday, we traveled to Fort Indiantown Gap to attend the departure of the Pennsylvania National Guard’s B & D Company, 2/104th General Support Aviation Battalion. These brave soldiers are heading to Ft. Hood, Texas for mobilization training and then deploying to Afghanistan. While we are at home, raising our children, working and taking advantages of the freedoms our country affords us, we must never forget the brave men and women who fight to protect our nation and our way of life every day. Please join me in keeping these and all of the brave soldiers in your prayers and best wishes for a successful mission and speedy return. Pictured below with our brave fighting men and women and Governor Tom Wolf. 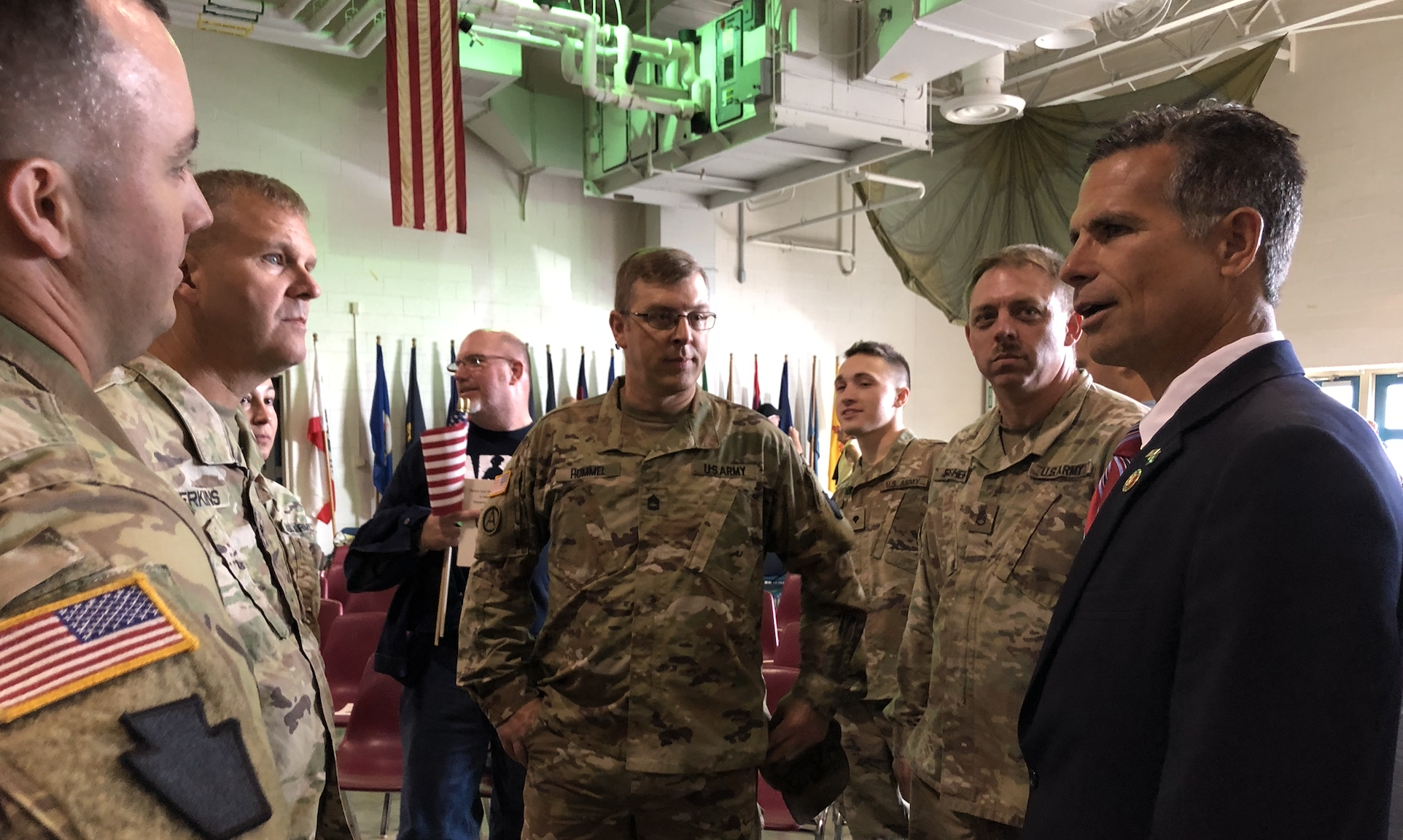 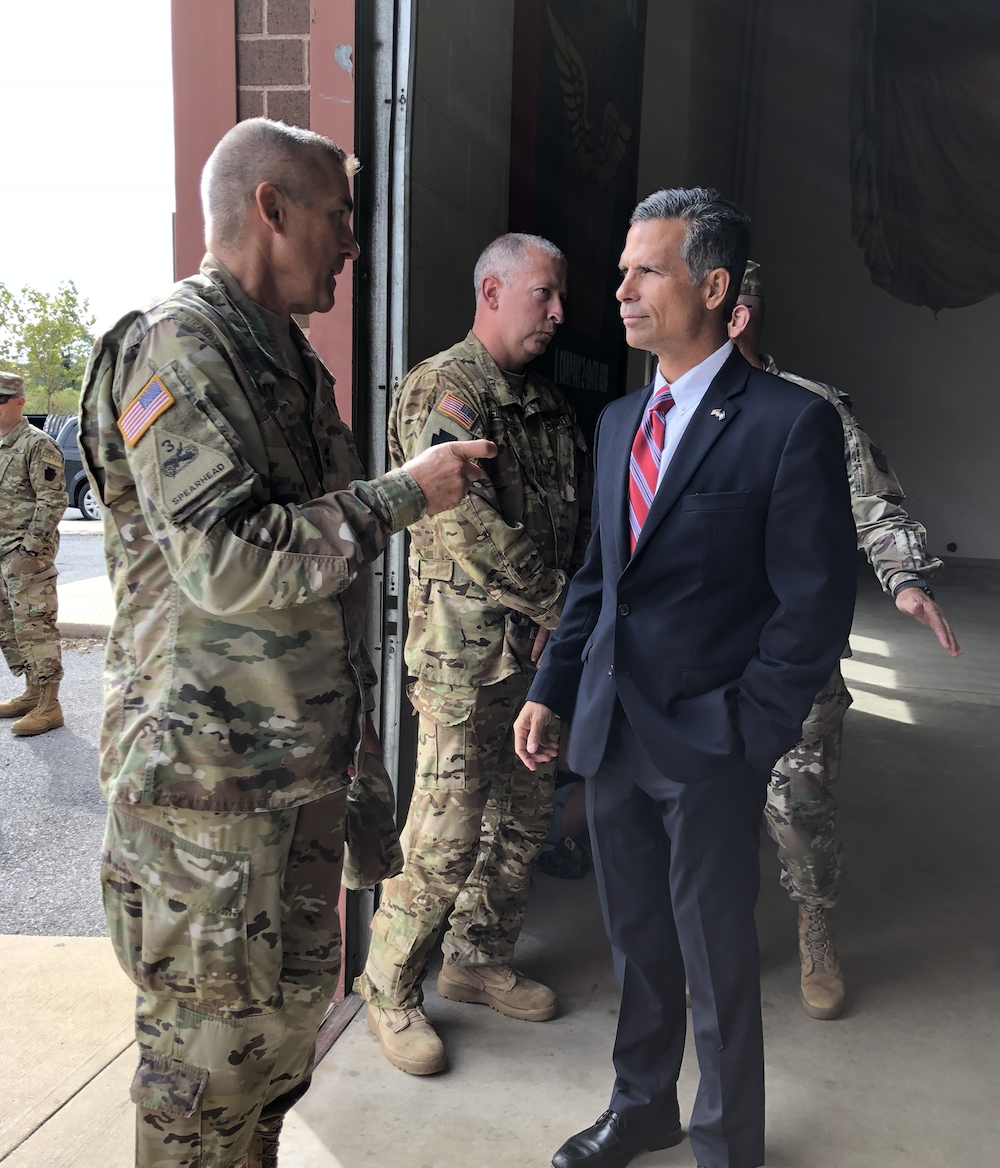 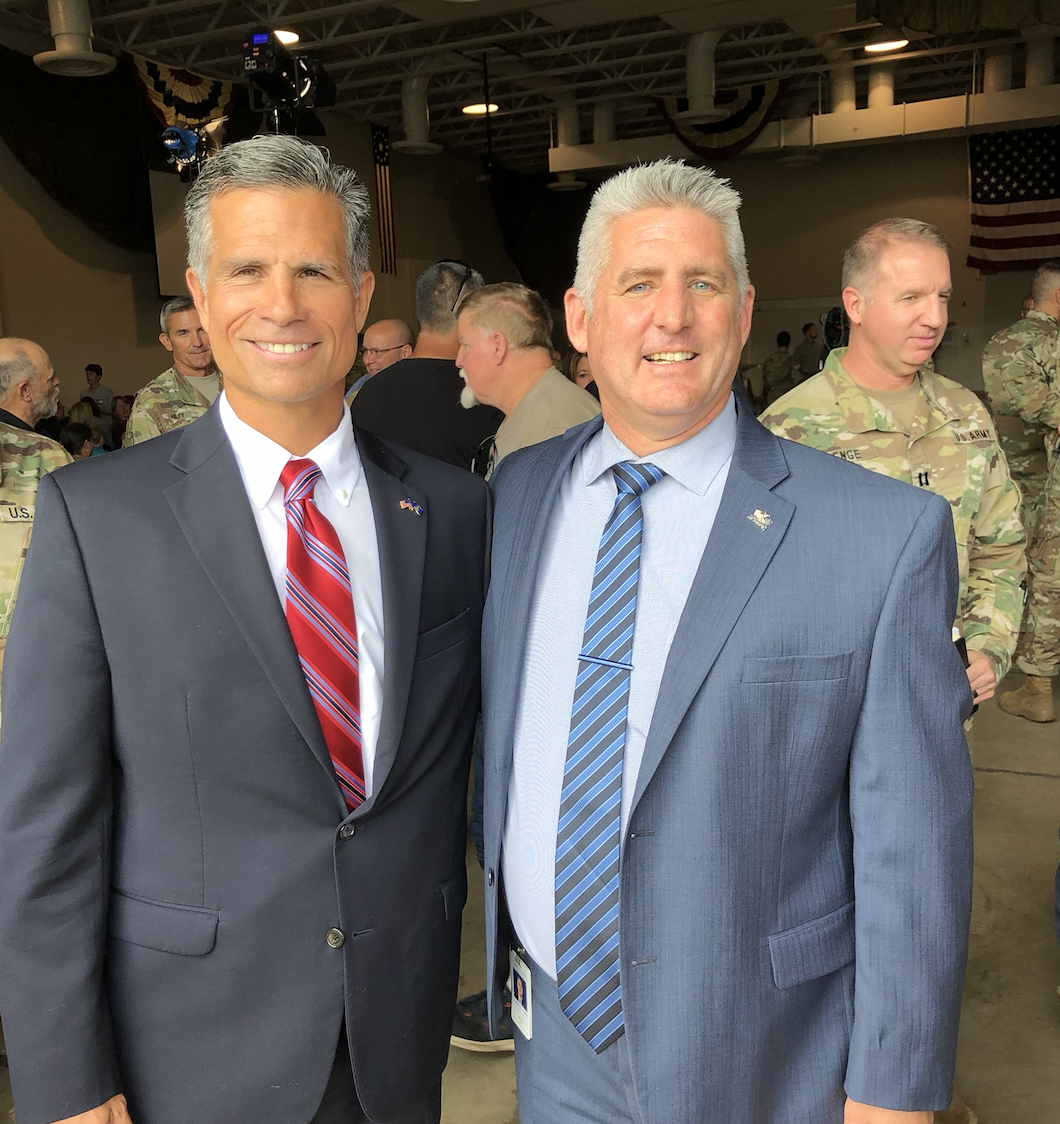 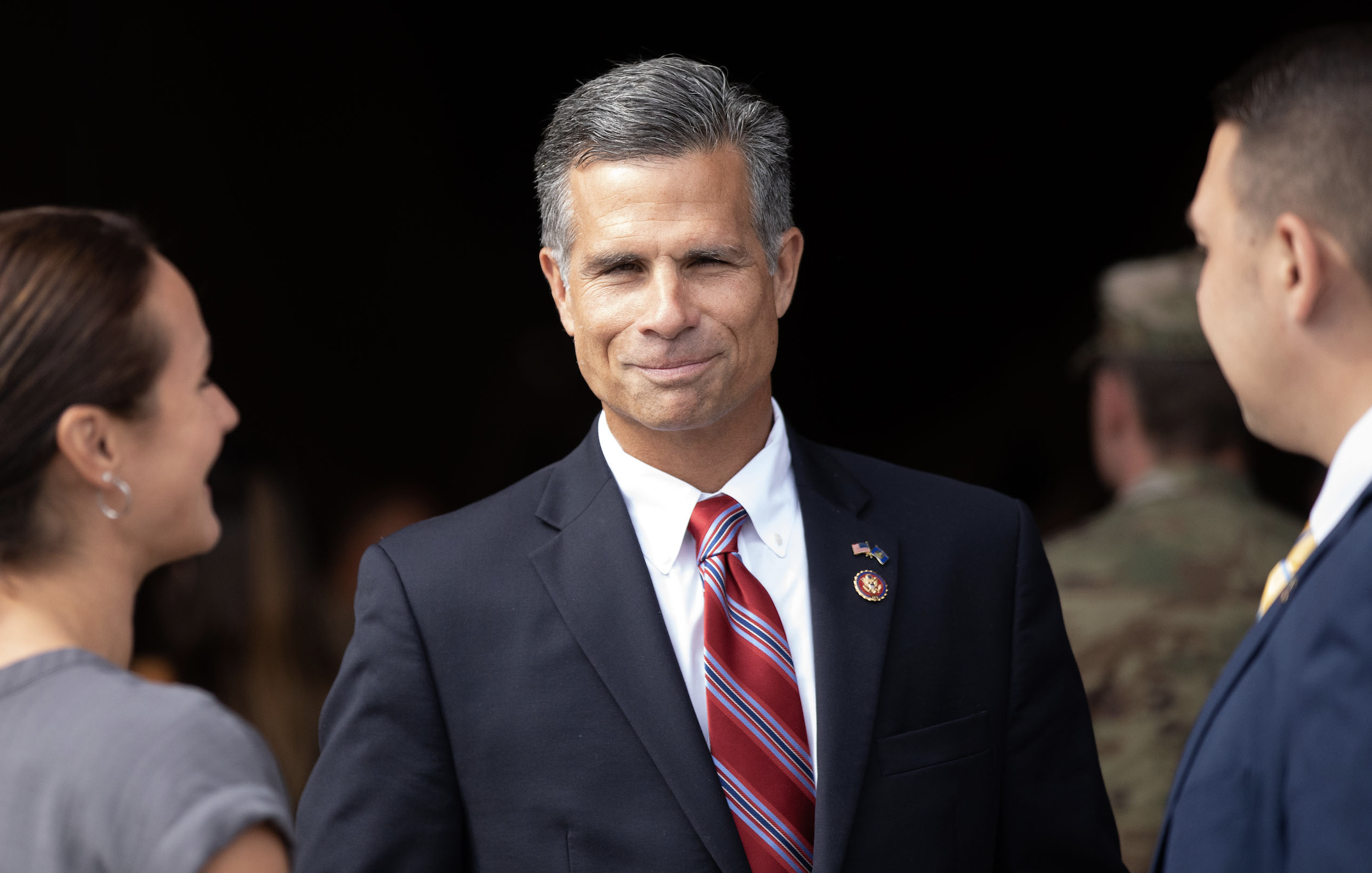 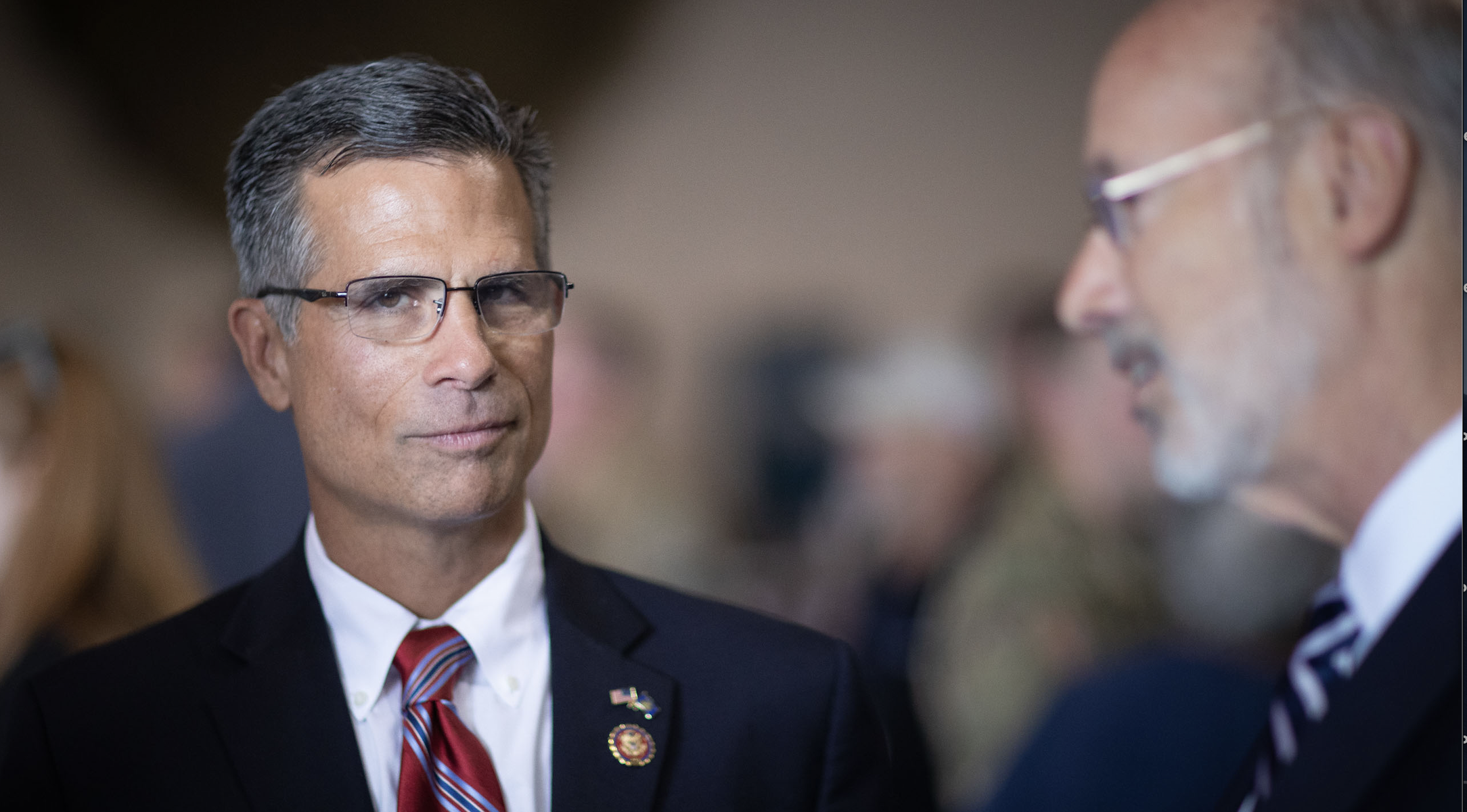 After that ceremony, we traveled to Berks County to Penske Trucking’s operational facility. We met with executive staff, including CEO Brian Hard at the invitation of Vice President of Government Affairs Mike Duffy who has become a good friend. Penske is one of the best American business stories I have been told. We are very fortunate to have them located in our District. 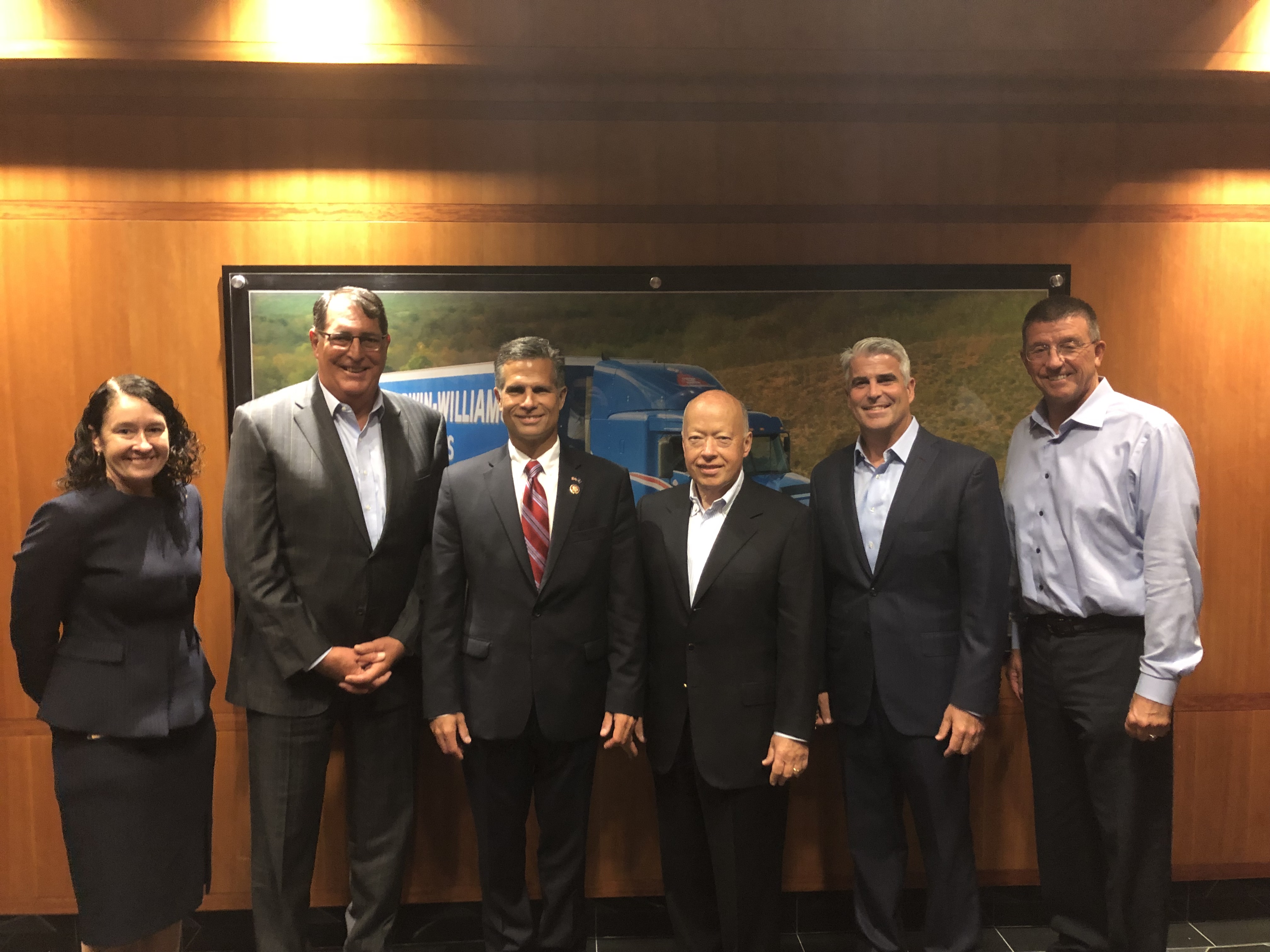 Yesterday, we attended and addressed the Berks and Schuylkill County Bar Association’s joint legislative breakfast. We spoke about many of the important issues facing our nation and their members, including access to proper legal representation. I want to thank these great organizations for hosting me at this event. 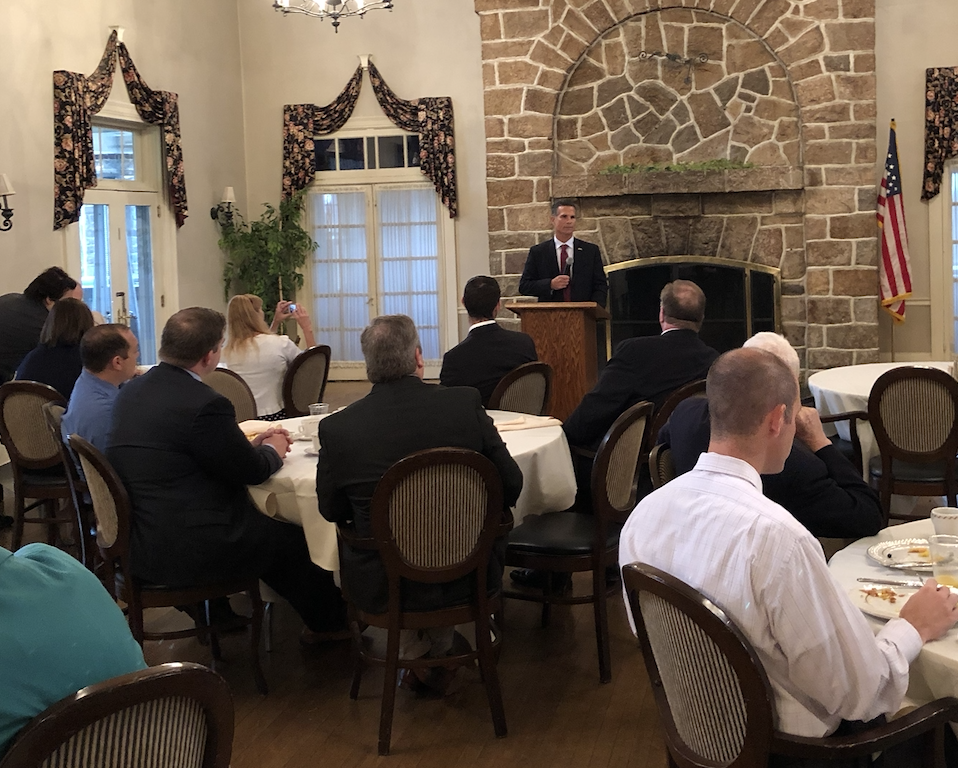 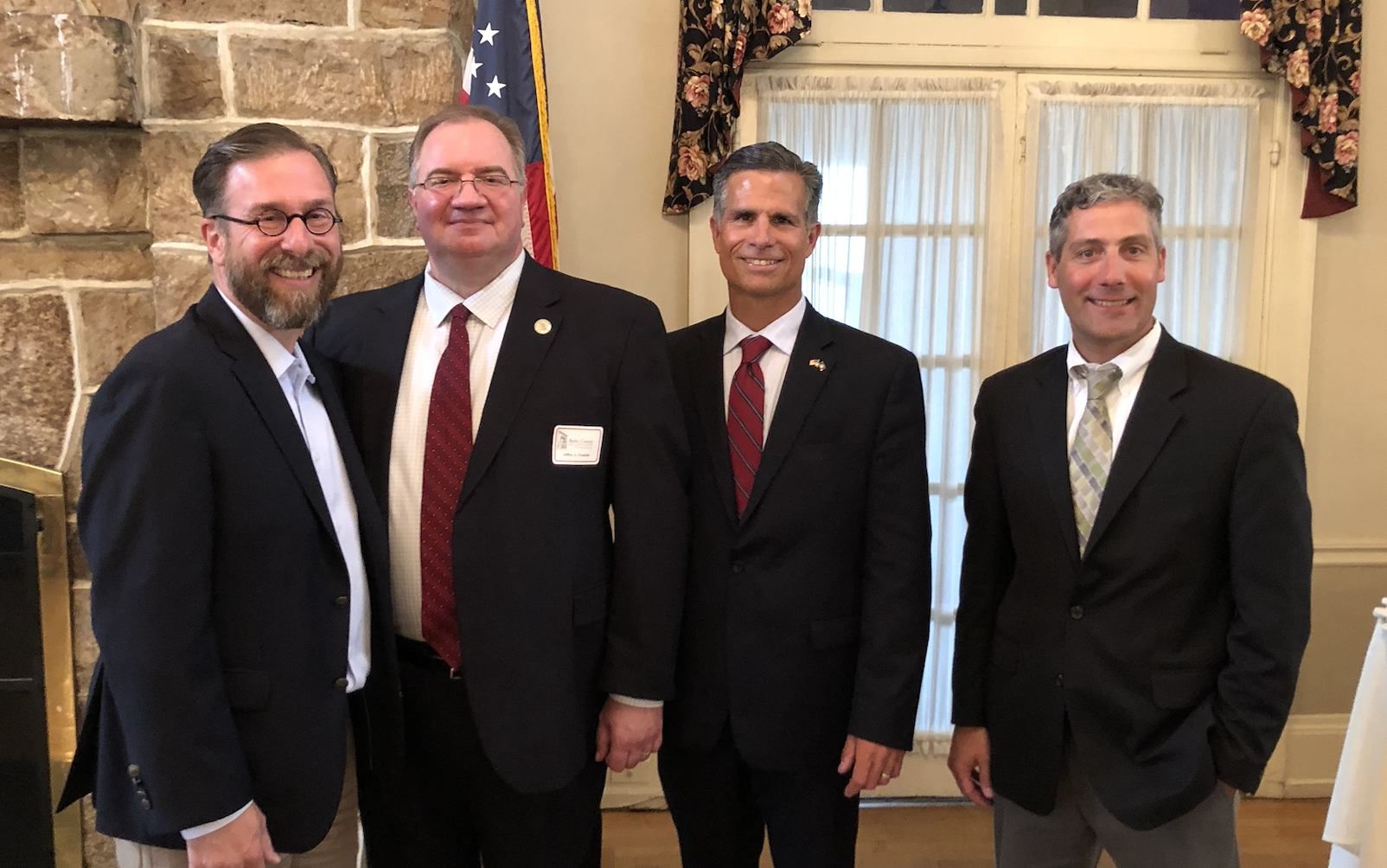 Later, we conducted a tour of Main Street in Berwick with State Representative Dave Millard. We stopped by local businesses and discussed issues with residents. One message was clear and that was they very much support the work President Donald Trump is doing in Washington. After our tour, we stopped by and met with the Columbia County Commissioners, Chris Young, Rich Ridgway and David Kovach. Columbia County has great state and local representation and I was pleased to visit with them all. 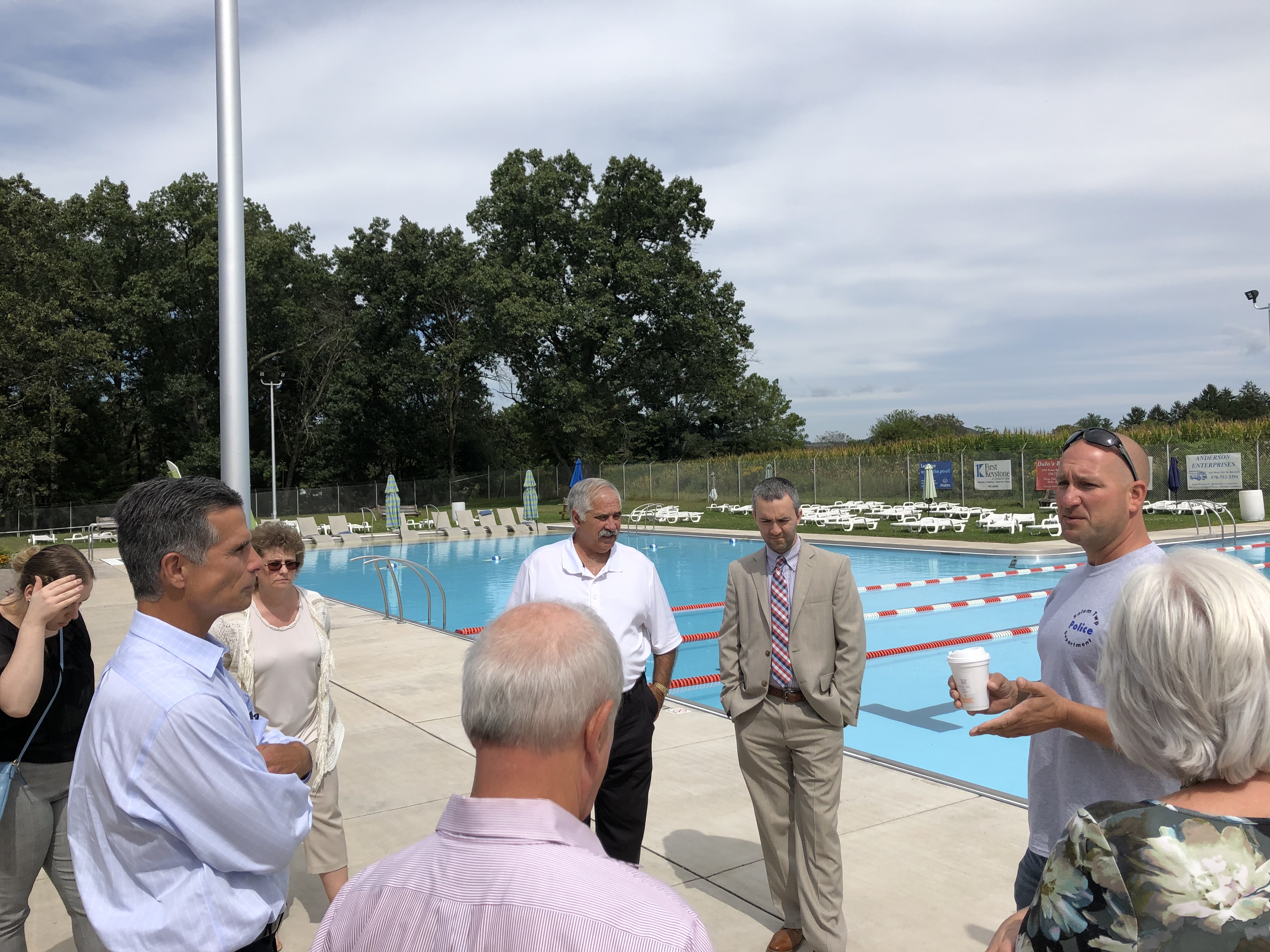 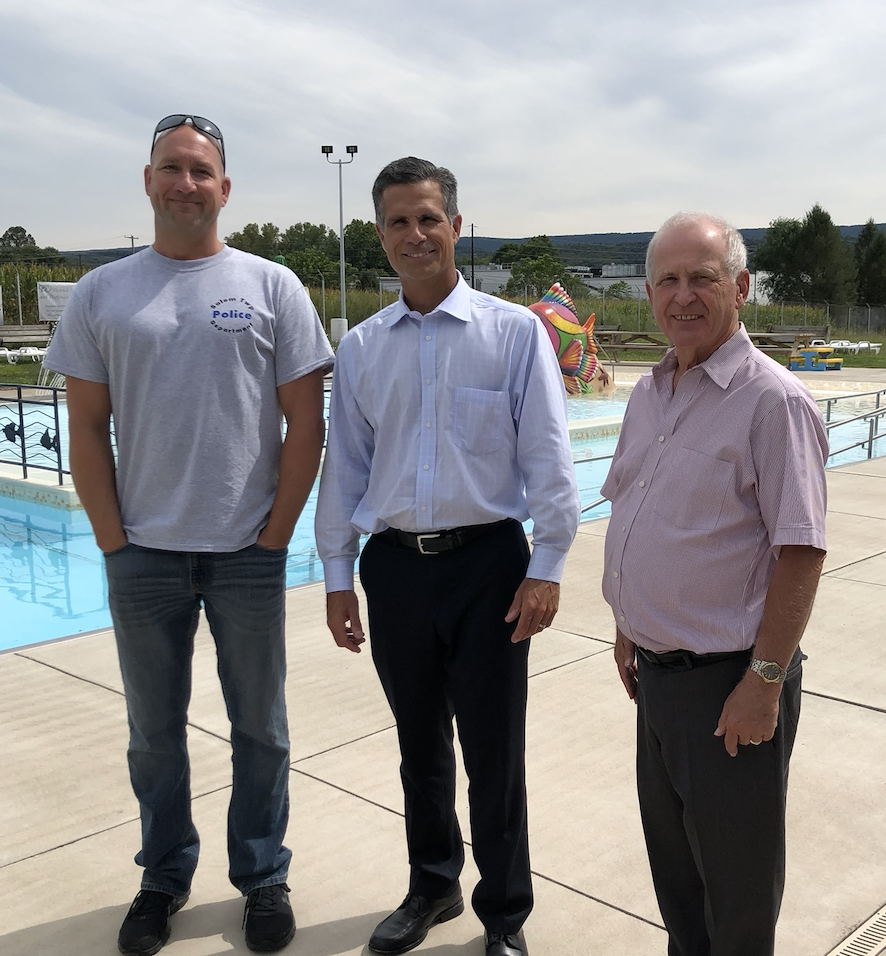 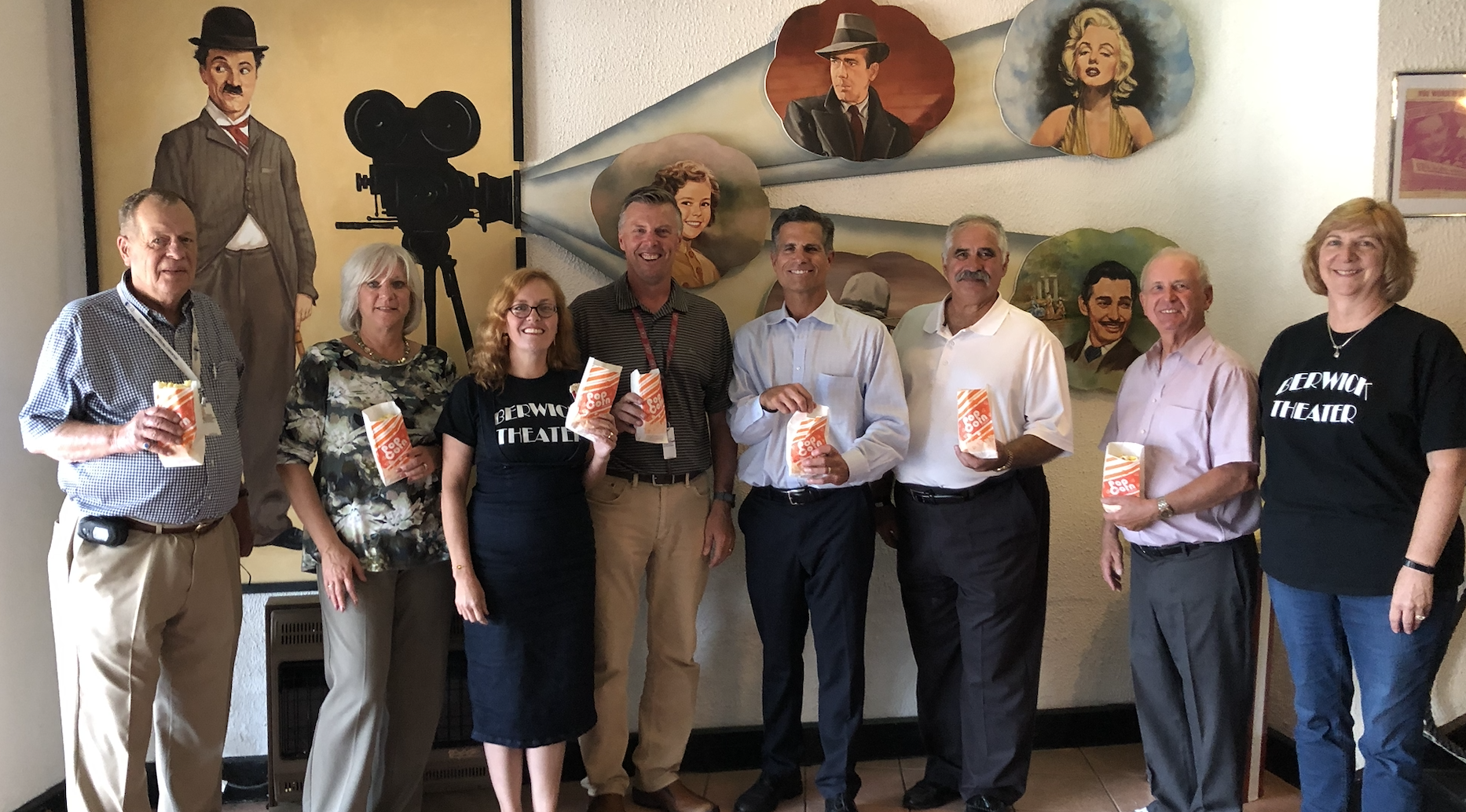 Pictured below at the Reliance Fire Company in Berwick with Bill Coolbaugh, Jason Eric, John Tigue and David Dietrich. 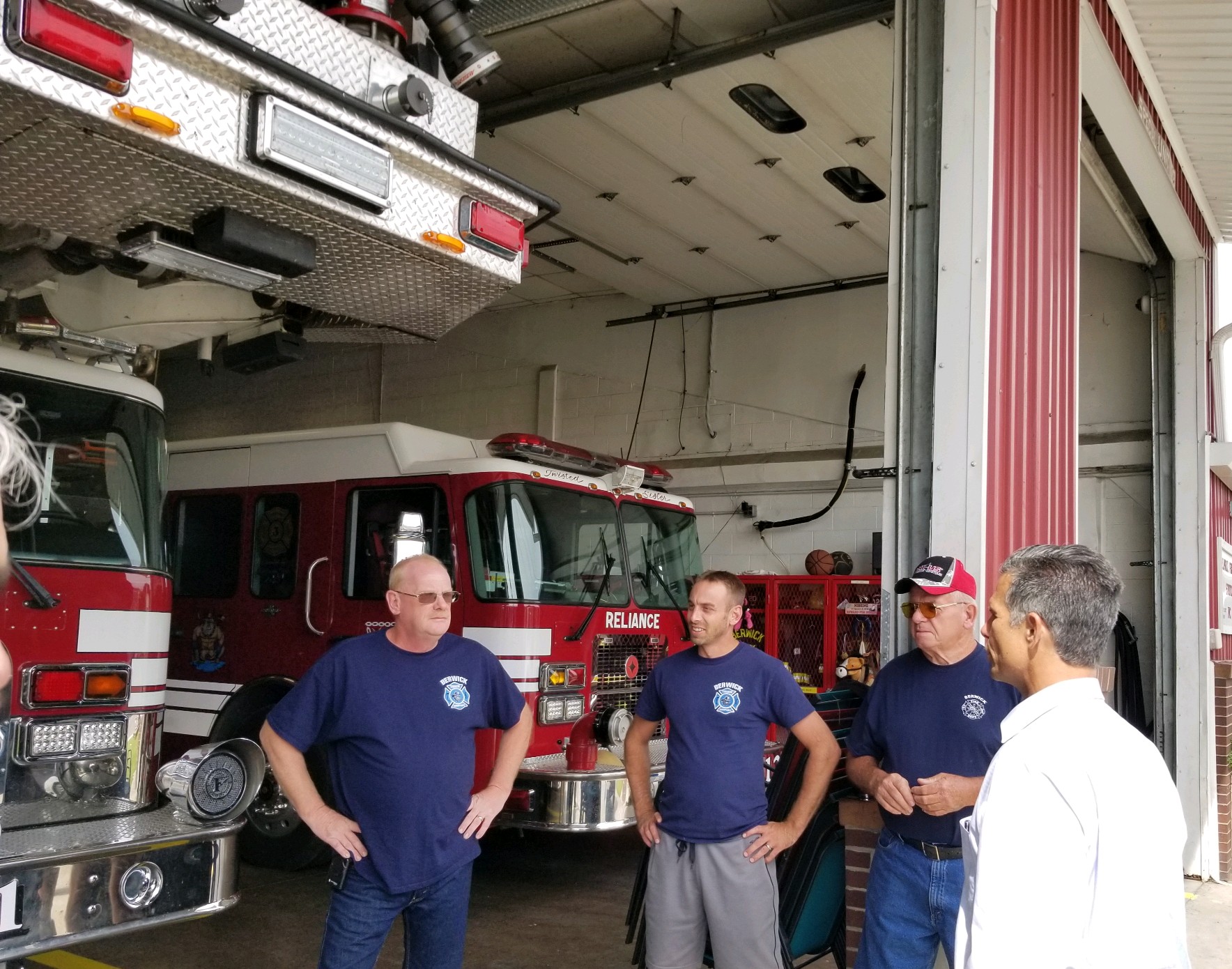 Pictured below with State Representative Millard and Janelle Surkin, Athletics Director for the Berwick YMCA. 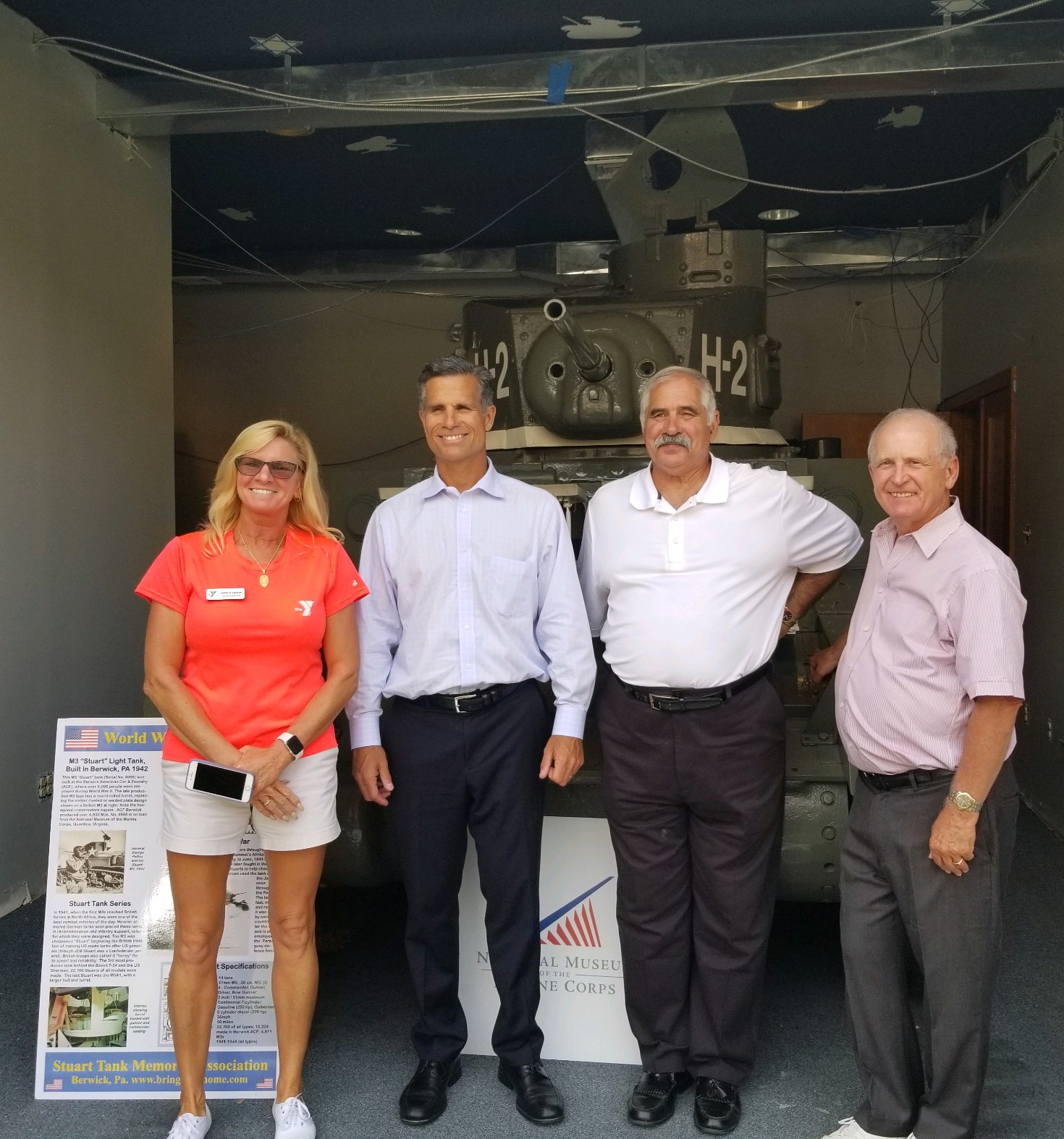 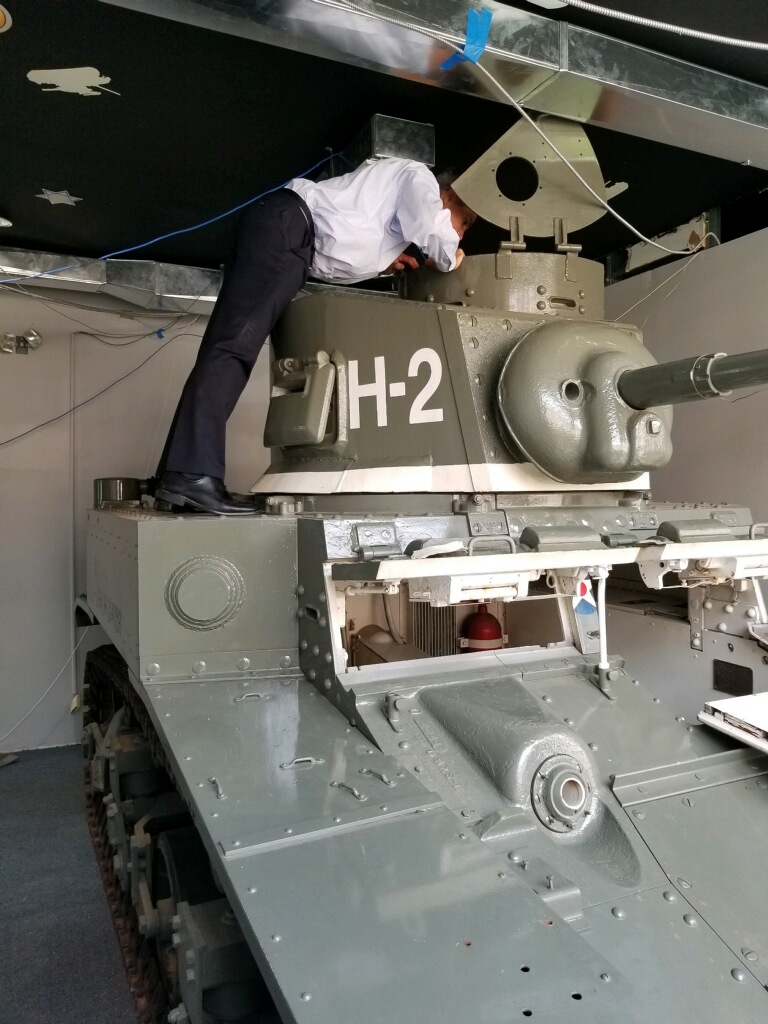 This week, we were proud to announce that the U.S. Department of Health and Human Services has awarded Pennsylvania over $55 million to address the opioid crisis. We are committed to doing all we can to fight against the drug epidemic and provide those battling addiction with effective treatment, prevention, and recovery resources. This new funding will strengthen our community’s ability to better understand the epidemic and provide high-quality, coordinated care to Pennsylvanians struggling with addiction.

Today, we stopped in Plymouth, Luzerne County to visit the Healing Wall. We want to thank Sergeant Clyde Peters, a Vietnam Veteran and Purple Heart recipient, and the people of Plymouth for putting together this inspiring event. 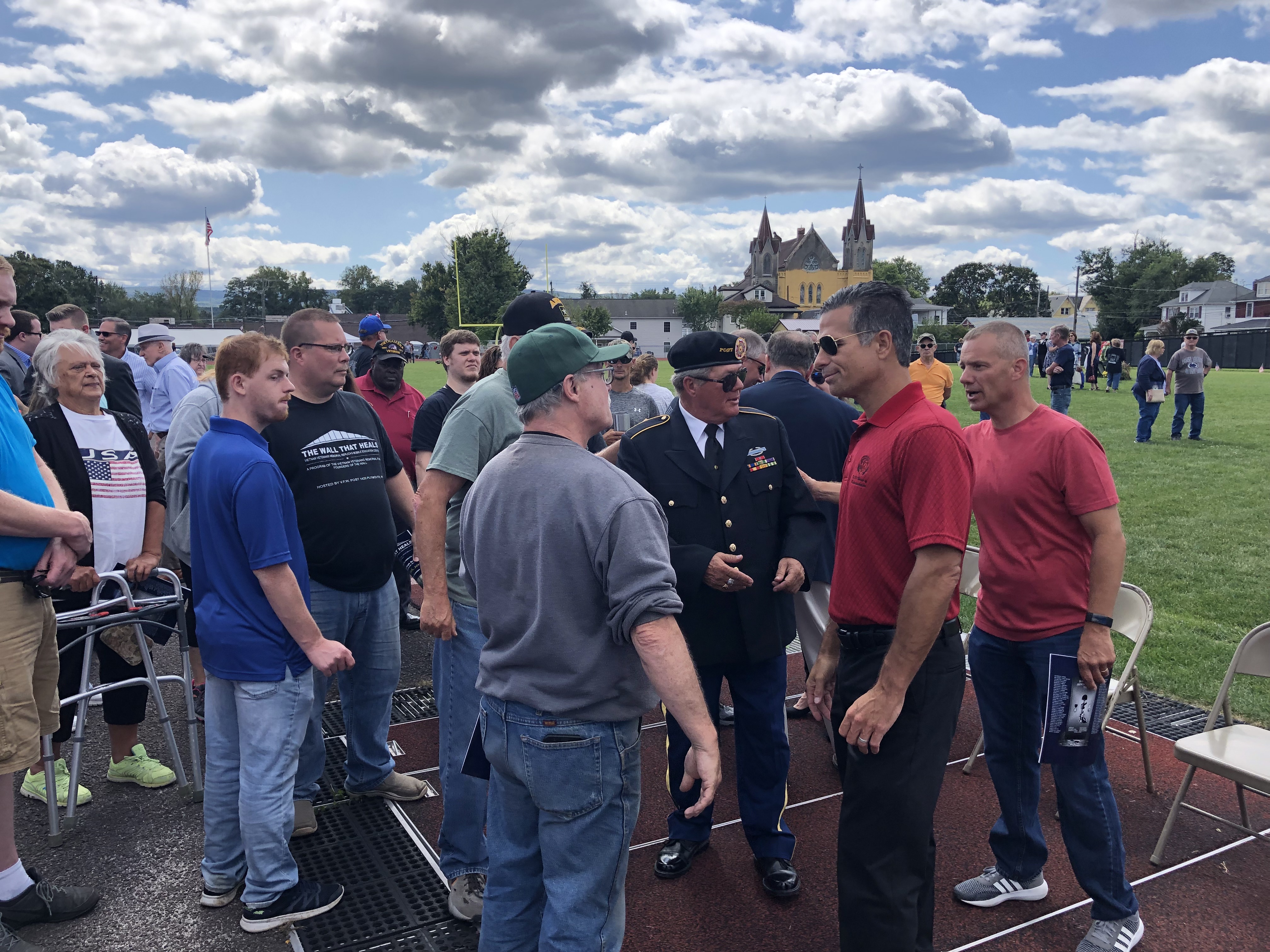 In News You Won’t Hear In the Mainstream Media… While there has been a great deal of talk from national news networks rooting for our nation’s economic collapse, our economy is still performing well.

President Trump is working to fix unfair trade deals that have hurt our nation for many years. While these efforts are creating some temporary hardships for certain industries, the goal is to move our nation forward and ensure our country is not being cheated by countries like China, who are infamous for stealing technology and currency manipulation. Our nation must fight back and fight for fair trade deals.

In our new weekly Friday Night Lights section, we want to give a shoutout to the Berwick Bulldogs for their big win over Williamsport, 17-10. This was a defensive battle and congratulations to the Bulldogs for representing our District well. 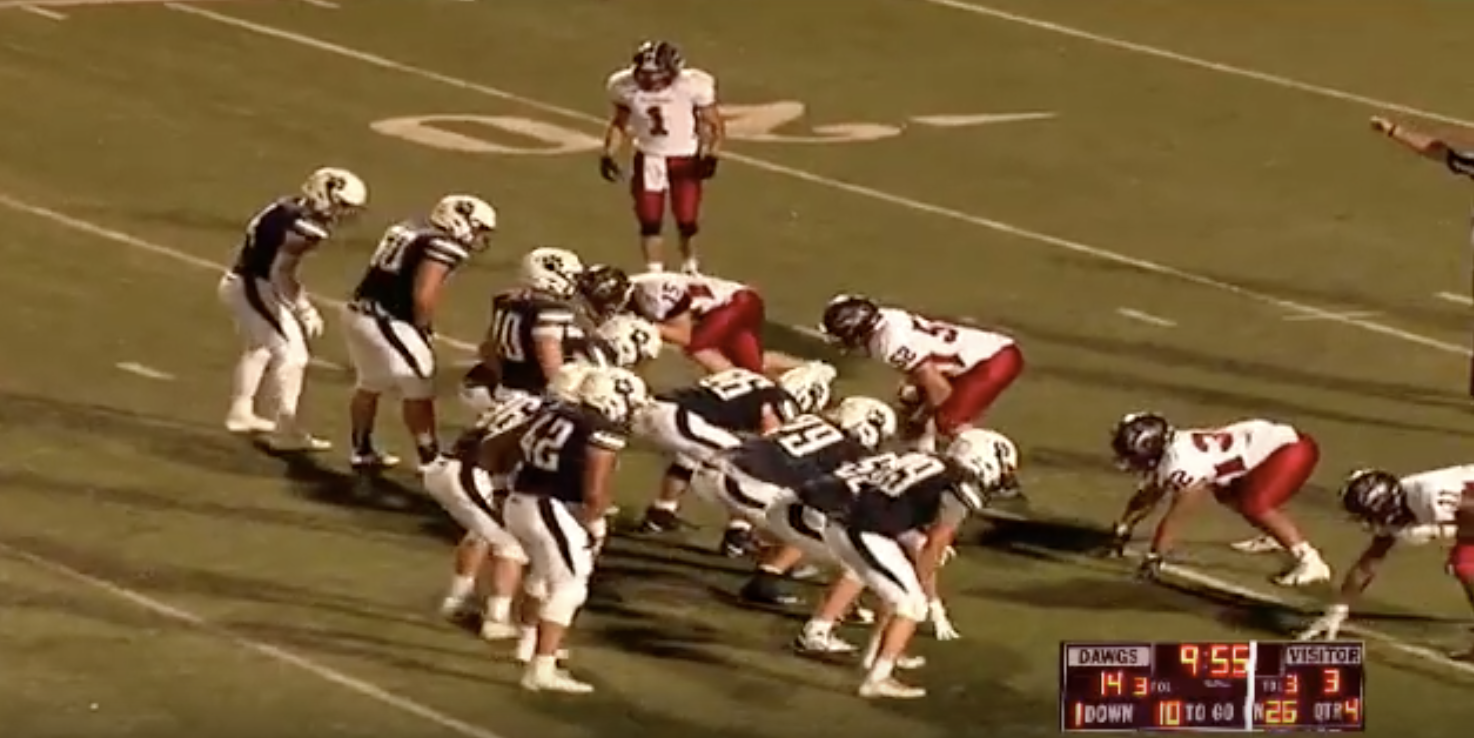 As a proud father, I also have to give a shout out to the Dallas Mountaineers for their victory over Hazleton, 41-13. My son Danny plays Fullback and Linebacker. This was a great victory and showcased two good teams. Congratulations to all our student athletes and best wishes for success inside and outside the classroom. 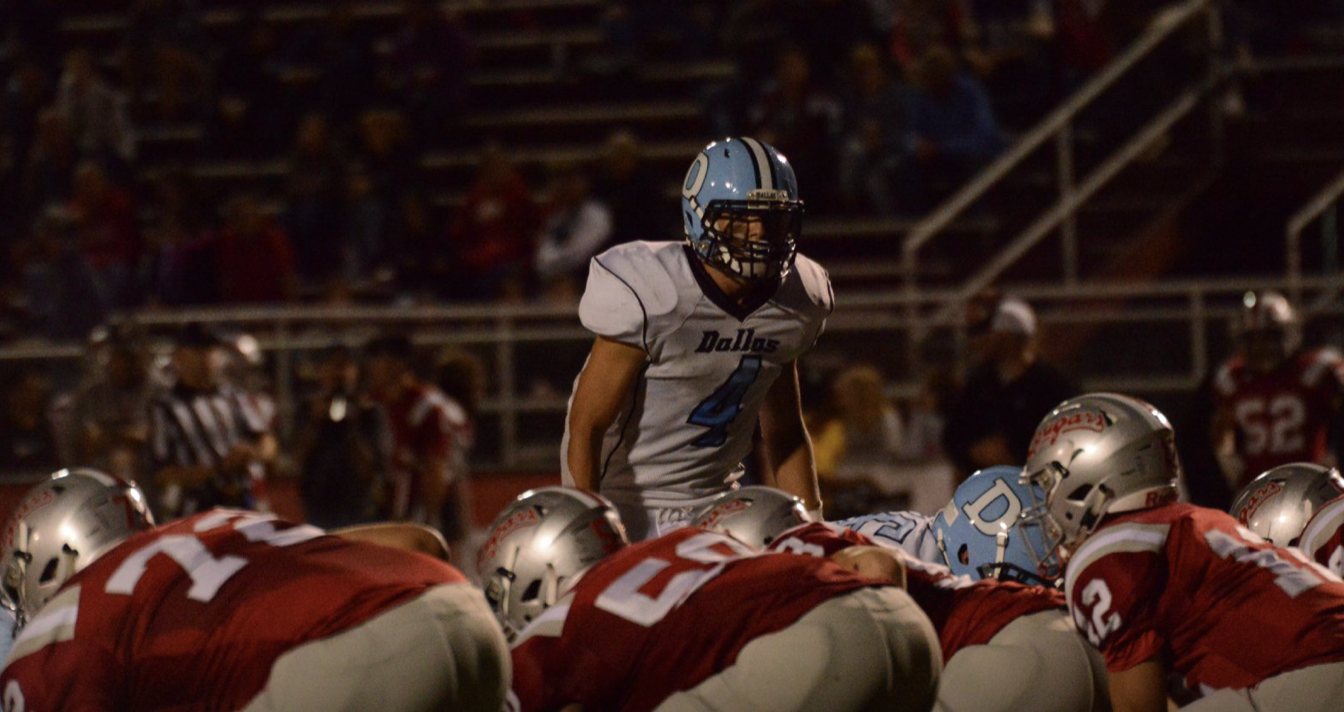