Good afternoon and welcome to our Week End Update. We know the update is usually sent on Friday, but we have been very busy.

After spending last week in Israel on what was an incredible trip, it was nice to be back home in the 9th Congressional District. Traveling outside our country is a wonderful experience, especially to a great a country with such a rich history, but it also makes you appreciate just the greatness of our nation and commonwealth.

This week, we attended events across the District, meeting with constituents, business and community leaders to talk about issues important to them as well as provide them with updates on what is going on in Washington, D.C.

We talked to a major insurance company in the Commonwealth to discuss surprise billing, the practice of high costs mysteriously showing up on your healthcare bill. There are a number of legislative proposals that are going to be discussed in Congress. We have a lot of people who are discussing this issue and how they have been held hostage and harmed by these large costs.

On Tuesday, we traveled to Lebanon to attend the MidAtlantic Farm Credit and Ag Choice Farm Credit (MAFC) Event, hosted at Brian Boyd’s farm. Brian is an MAFC Director. Also in attendance were MidAtlantic CEO Tom Truitt and AgChoice CEO Darrell Curtis. We had an informative discussion about the state of the agricultural industry in the District and MS4 fees amongst many other things. It was a very informative discussion.

The next day, we attended Columbia County Farm Bureau Tour of Brian Campbell and Alan Kemmerer’s farm. We discussed agricultural issues, including the labor shortage, immigration, commodity pricing, disaster assistance and crop insurance. I want to thank all the farmers for attending, especially our hosts. This meeting was incredibly informative. Pictured below with State Representatives Kurt Masser and Dave Millard and Columbia County Commissioner Chris Young. 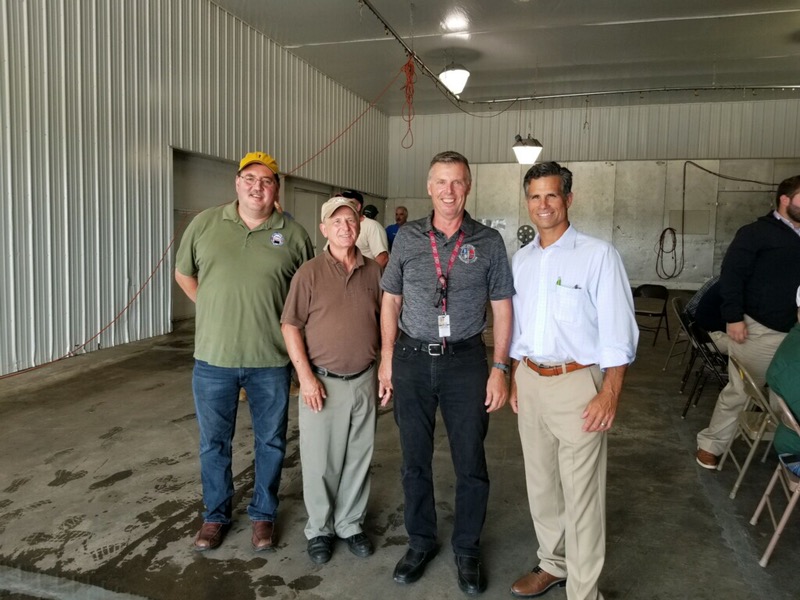 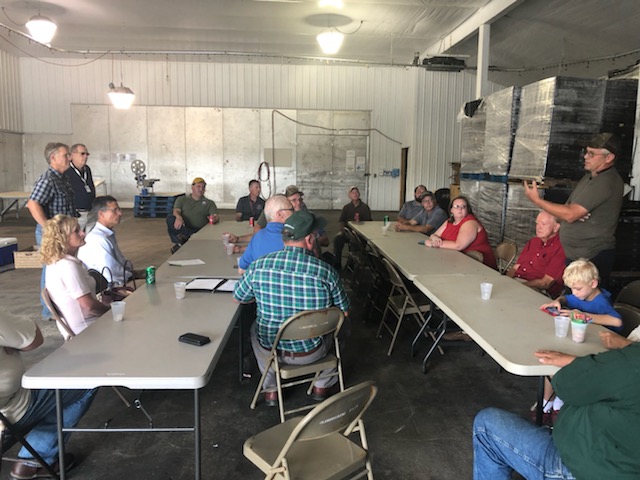 Later, I spoke at the Inaugural Phyllis Schlafly Banquet for Eagle Forum of Northeast Pennsylvania. We were proud to join Ed Martin, President of the Schlafly Eagles as well as John and Andy Schlafly. The featured speaker was Gregory Whitestone, a geologist and the author of The science that Al Gore doesn’t want you to know. He delivered a thought-provoking address. I want to thank Schuylkill County Coroner Doc Moylan for inviting me to attend.

On Thursday, we attended the Northeast PA Manufacturers and Employers Congressional Luncheon. It was great to be with MAEA Chairman Lance Miller and Vice President of Government Relations for the Commonwealth Foundation Steve Bloom. We discussed trade issues, including the benefits of the USMCA, coal refuse and the success our economy. 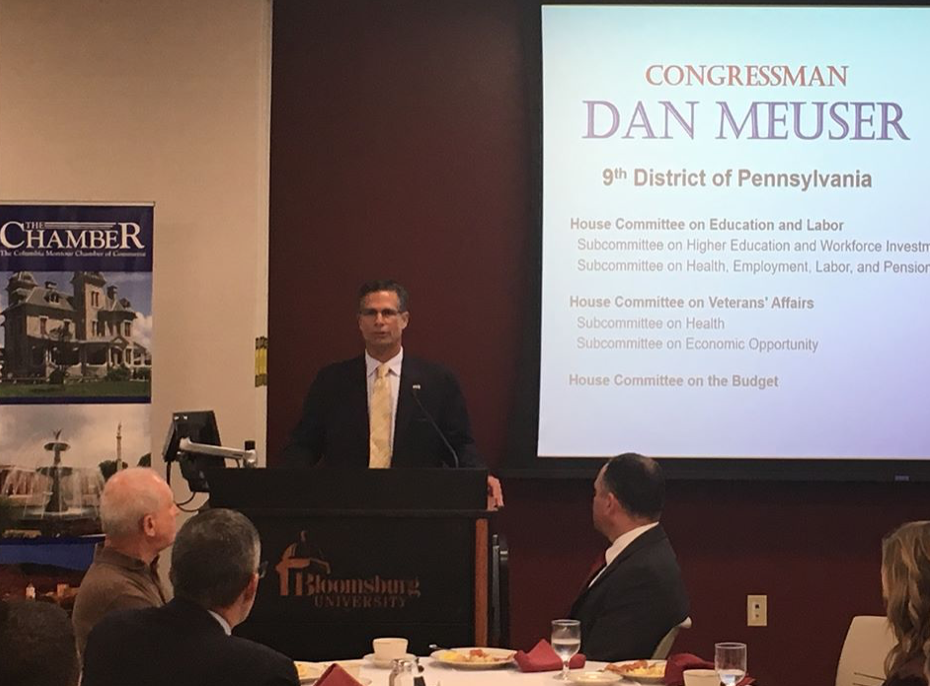 Later, we attended a meeting with the PA Manufactured Housing Association. Our District has a robust manufactured housing industry. Mary Gaiski, the Executive Vice President of the PA Manufactured Housing Association was joined by representatives from Pride Home Sales and Pleasant Valley/Pine Grove Homes to discuss the regulatory overburden from our federal government. They raised concerns that are hurting businesses and working families.

We then made a brief visit to the Realtors Association Reception in Danville. I was pleased to be joined by Congressman Fred Keller and State Senator John Gordner.

To close out the day, we stopped by the Greater Pittston Chamber of Commerce event where Pride, my family’s company which I helped to grow, received the Outstanding Business of the Year Award. This achievement is possible because of the leadership of my brother Scott and the hundreds of committed workers at Pride. I am very proud of their continued success.

On Friday morning, we began the day discussing 911 radio funding with the Montour County Commissioners before driving to attend State Representative Kurt Masser’s Golf outing. It was a fun event. Representative Masser is a strong advocate for his constituents and a great friend. Below is a picture with Representative Masser and Senator Gordner. Both of them are great partners and I value their counsel and experience. Easy to see why both of them have leadership roles in Harrisburg. 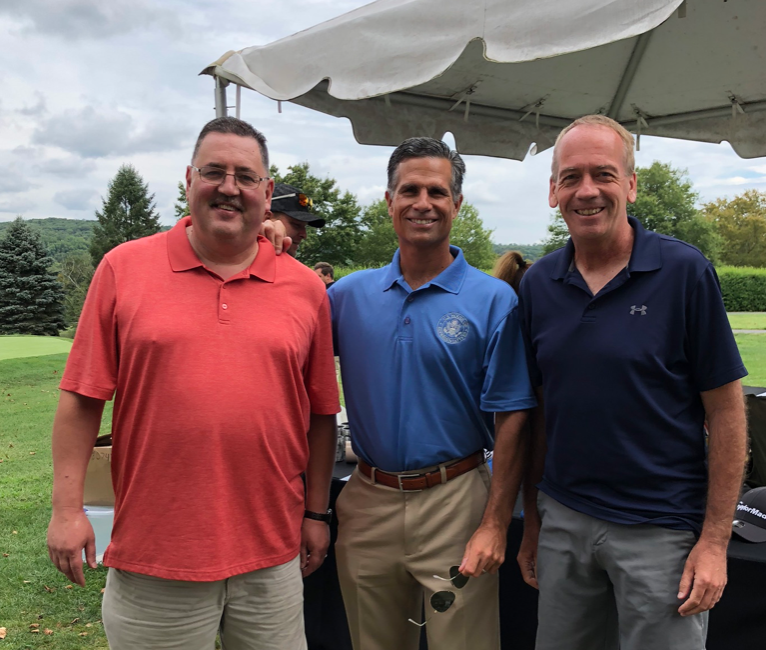 Later, we attended the Northumberland Fair to celebrate the 20th Anniversary. We were again joined by our friend and neighbor Congressman Keller.

Today, we attended the Fireman’s Convention Parade in Schuylkill County. We were joined by State Senator Dave Argall, State Representative Jerry Knowles, County Commissioner George Halcovage and so many of our brave first responders who put their lives on the line to protect us. 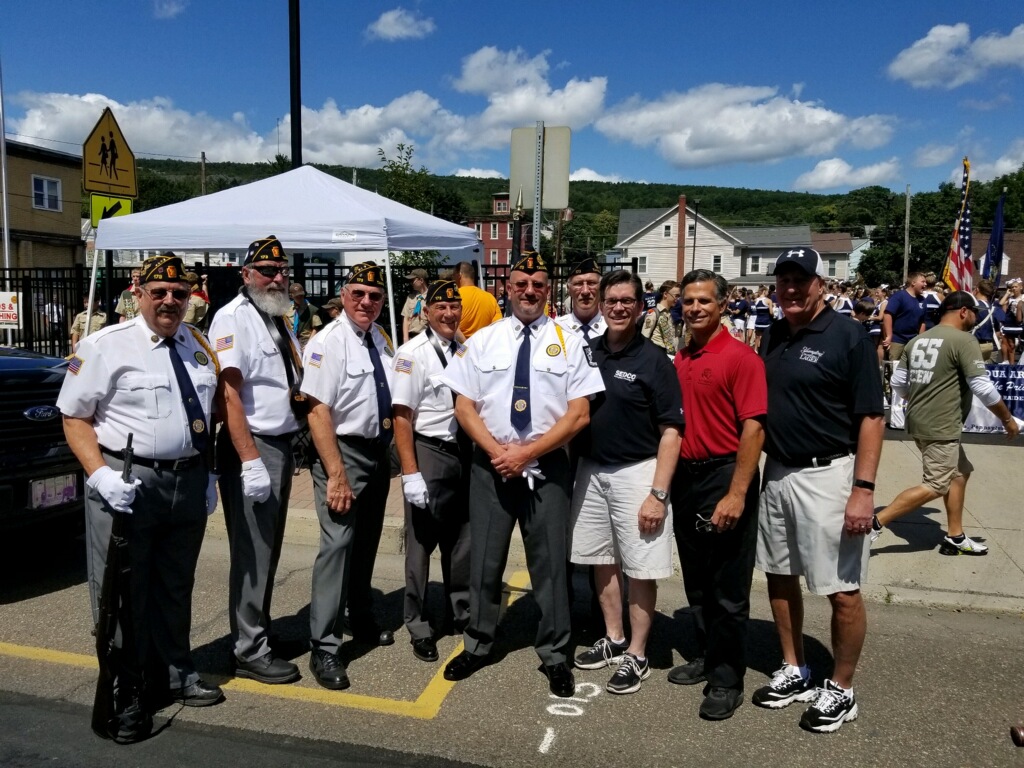 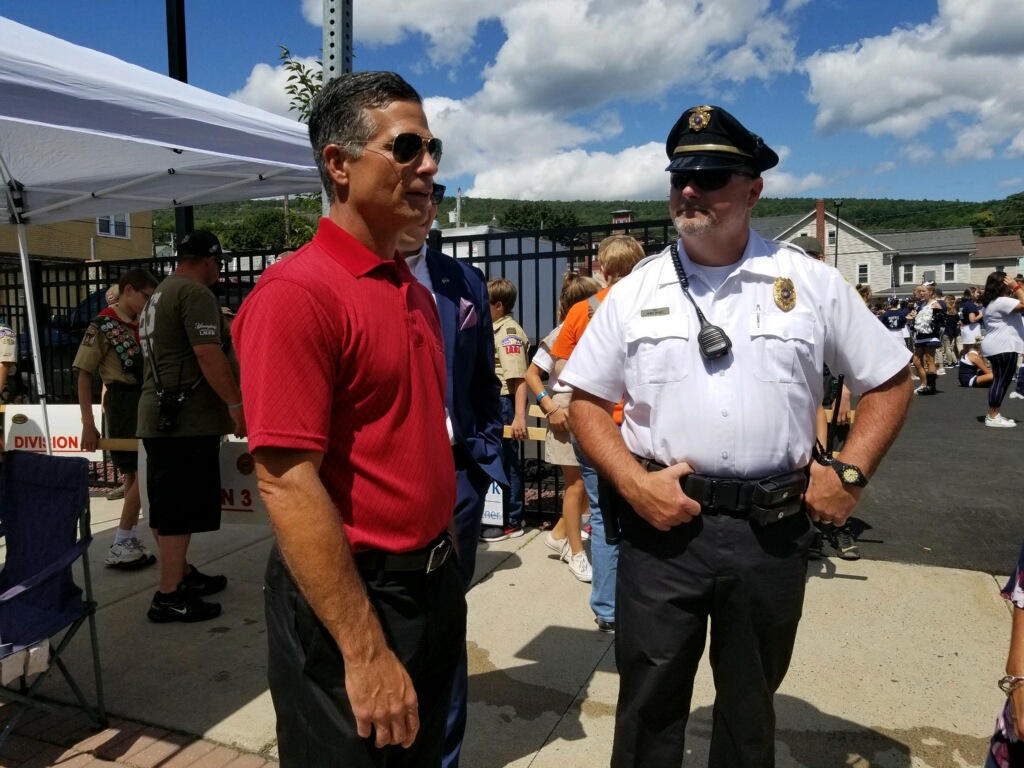 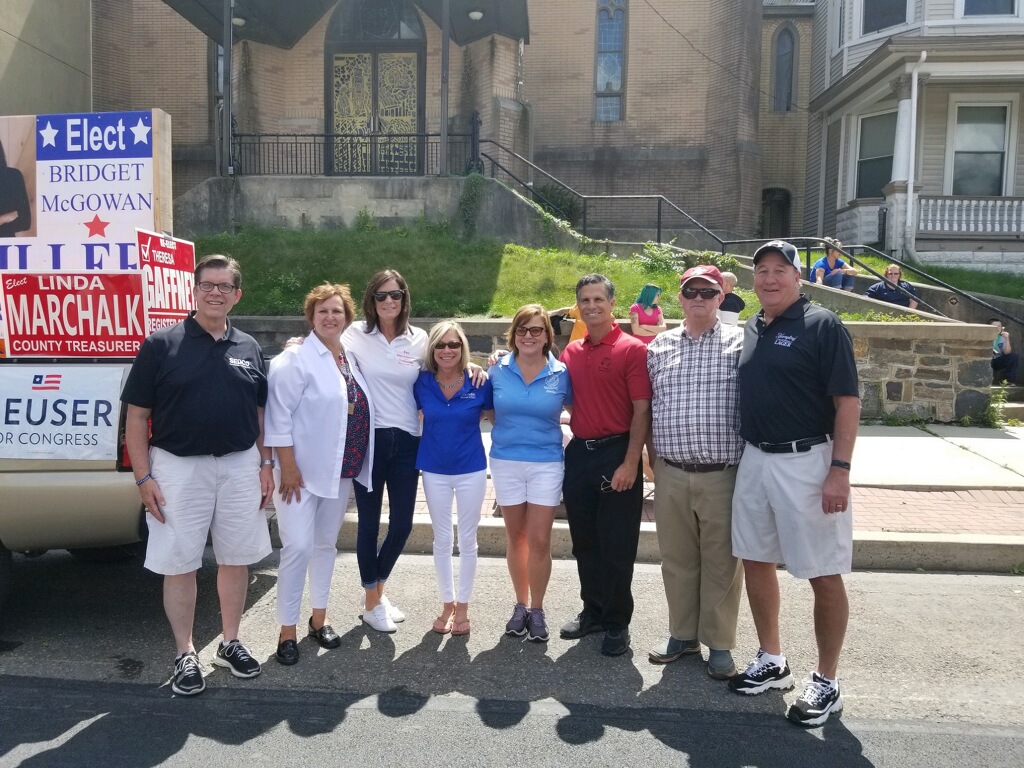 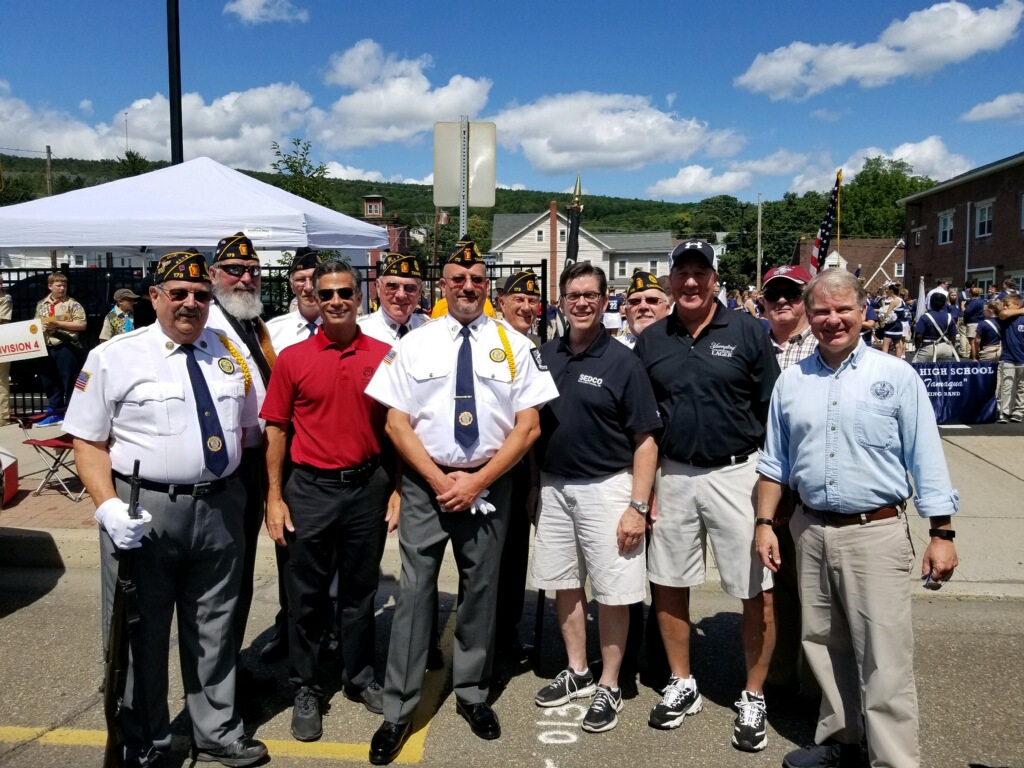 In News You Won’t Read In The Mainstream Media…While Congresswomen Rashida Tlaib and Ilhan Omar are committed to criticizing and weakening Israel; they don’t say one word about Hamas or the Palestinian Authority.

Democratic Congresswomen Omar and Tlaib’s attempt to go to Israel seems like a PR stunt. I know better than most, they could have attended the Congressional trip I attended the previous week with other freshmen Republican and Democrat members.

Instead, they have attempted to create a political issue. This move has backfired with even extreme liberal Bill Maher turning on them by highlighting their continued support of the BDS movement and calling for them to take a history class.

While they criticize Israel, they fail to mention some critical things about Hamas, including:

On our Congressional trip to Israel, there was a sign posted at a West Bank checkpoint. There is no such warning sign entering Israel. Certain members should have gotten out of their echo chamber and visited Israel and the West Bank to get the TRUTH. 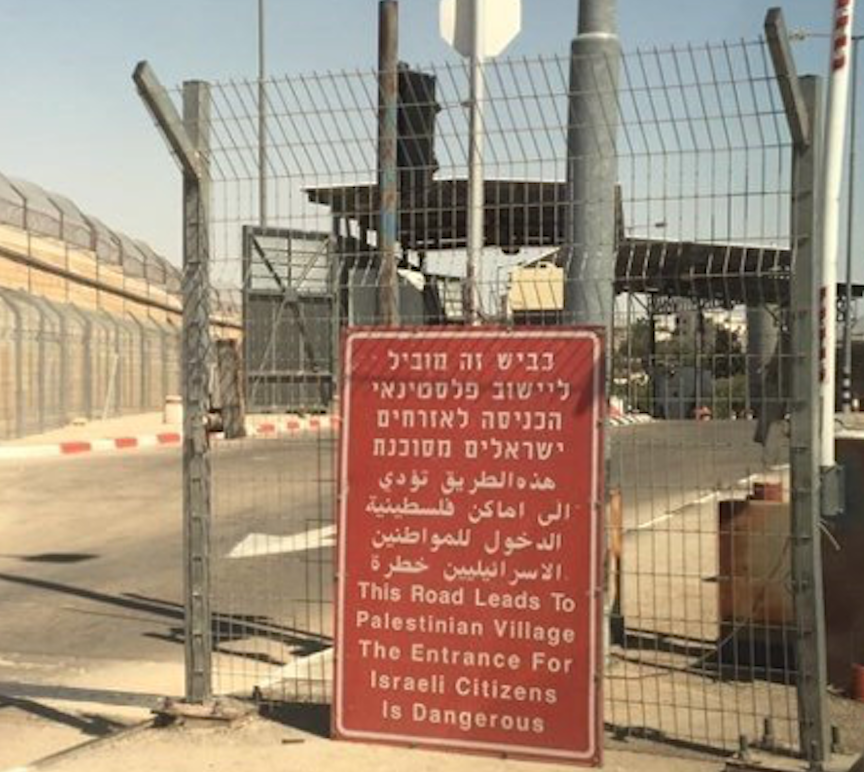 Clearly, most Palestinians want to live in peace. Unfortunately, extremism and the denial of the right of Israel to exist and be a sovereign nation is the root of the problem.

Thank you, have a great weekend and we will see you soon.