I want to start our weekly update discussing the outrageous decision by Governor Tom Wolf to withhold funding from hard-working Lebanon County residents, including substance abuse organizations and other entities that receive funding from the county, including countless small businesses. I sent a letter to Governor Wolf, pressing him to release funds to Lebanon County, which were created by CARES Act and appropriated to the county by the Pennsylvania State Legislature. The Governor's office is stepping far beyond its authority and does not have the best interest of Pennsylvanian's in mind. By not releasing the $13 million to Lebanon County, the Administration is further hurting families and small businesses that have already been financially crippled by the COVID-19 pandemic.

Congress signed the Federal Cares Act into law so that all citizens would benefit from this program, not so that a Governor could continue to pick and choose winners and losers as he has done time and time again during this pandemic. 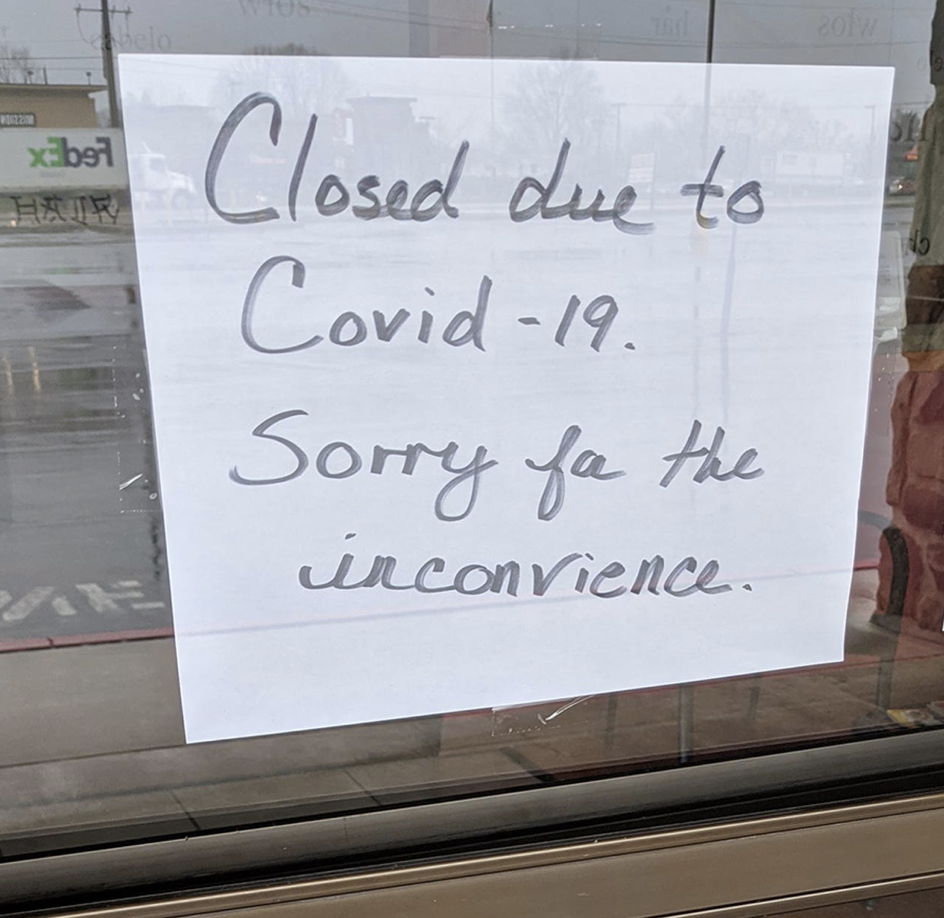 The Wolf Administration's new guidelines for restaurants and bars are just another clear as day example that the Governor is out of touch with a majority of Pennsylvanians. We have heard from restaurant and bar owners throughout Pennsylvania's 9th Congressional district who have said they simply cannot survive the Governor's new orders. Why should a restaurant in Danville, Palmyra, or Weatherly be punished for a rise is COVID-19 cases in Philadelphia and Pittsburgh. It is time that Governor Wolf works with the private sector to help businesses recover, not kill their livelihoods.

It is also worth noting that the Governor issued this order on 6:30 pm Wednesday for a policy that went into effect at midnight. He effectively gave bars, restaurants, clubs and social halls 5 hours notice. Unfortunately for many Pennsylvanians, hundreds of weddings, graduation parties and other family events were booked based on the Governor's previous orders where many have been erring on the side of caution. Like many others, the Governor's order was handed down with no input from the business community or organizations. This is dead wrong, highly disruptive and it is bad governing.

What should be discussed is how to be smart, safe and focus on ways to help these small businesses remain open, so they don't go bankrupt. The Governor is making decisions in isolation and that is why they have been poor and fail to take into account the major impacts they are having on Pennsylvanians. People want to be safe and we can do this right if we truly work together. People have lost trust in the Governor because he doesn't talk to them; he talks at them. After this coming November election, when we deliver Pennsylvania for President Donald Trump and win back control of the U.S. House, we must be sure to elect a new Governor in 2022. A person who will truly represent all Pennsylvanians and fight to improve our Commonwealth. We need a Governor who believes Pennsylvania can be the new Texas and will highlight a plan to get us there!

In other news, according to the Immigration and Customs Enforcement (ICE), released startling statistics that prove we must pass the Coronavirus Swindlers, Crooks, and Manipulators (SCAM) Act. According to ICE, US law enforcement has seized more than 840 shipments of fraudulent COVID-19 goods since the start of the crisis, making 46 arrests. There have been $1.3m-worth of seizures in connection with suspected fraud under the Coronavirus Aid, Relief, and Economic Security (CARES) Act, and $17.9m in disrupted transactions and recovered funds.

The SCAM act would increase penalties on those who commit fraudulent activity involving phishing emails targeted at seniors and their recovery checks, websites selling fake masks, and deliberate misinformation regarding CDC guidance. It is incredibly sad that some would use the Covid-19 pandemic as an opportunity to pray on our most vulnerable and they must face punishment.

Last week, I joined Sam Lesante to discuss important issues facing our nation and our District. Click here or below to watch. 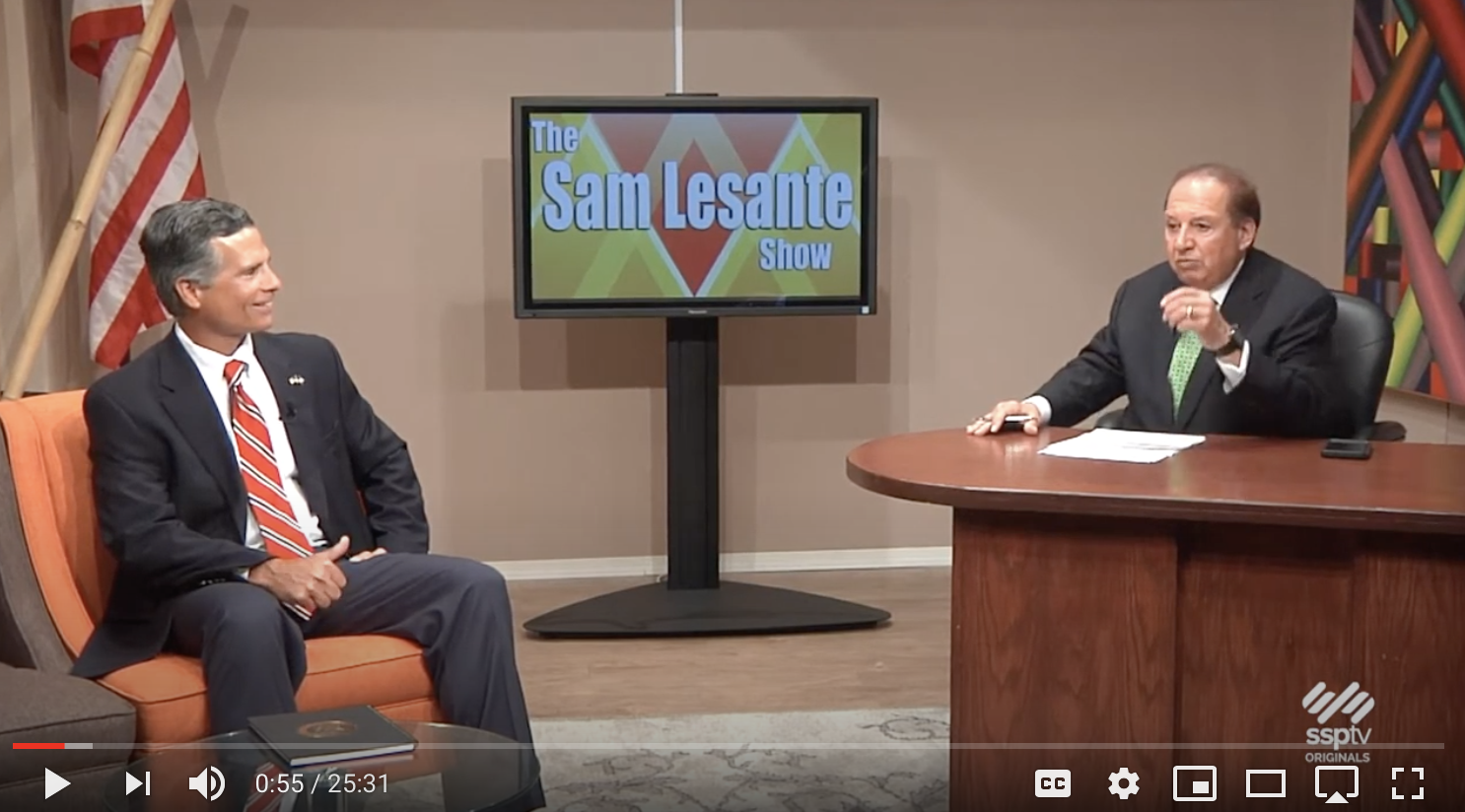 On Thursday, I traveled to Philadelphia's National Constitution Center, where Secretary of State Mike Pompeo delivered remarks about the Commission on Unalienable Rights. Secretary Pompeo said property rights and religious liberty are “foremost” among human rights, and that the United States must take inspiration from the Declaration of Independence as it pursues a foreign policy that realistically promotes fundamental freedoms. A copy of the draft report he unveiled can be read by clicking here. Secretary Pompeo made an incredibly simple yet brilliant case as to why the American flag is the most recognized symbol of freedom in the world and has been for over 200 years. Frankly, anyone who truly understands would never kneel to the American flag.

Yesterday, I joined State Senator Lisa Baker and the State Director for the USDA Curt Coccodrilli for a tour of the Friedman Jewish Community Center in Dallas. Gary Bernstein, their CEO, gave us a tour of their day camp. (Pictured Below) 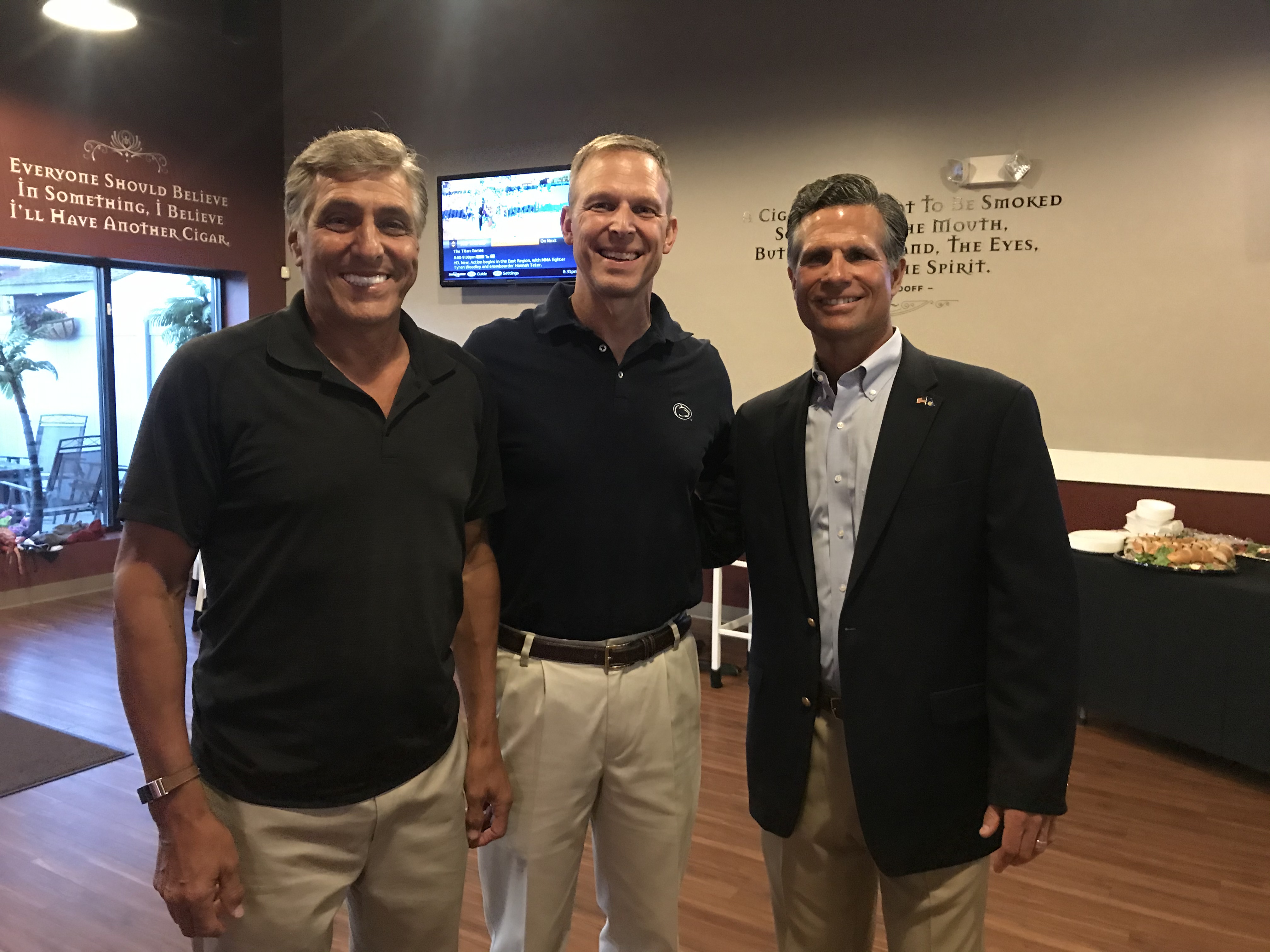 I spoke at the Berks County GOP Lincoln Club Reception. I want to thank Chairman Clay Breece and all those who attended, including State Representatives Barry Jozwiak and Ryan Mackenzie as well as County Commissioner Christian Leinbach. I highlighted the importance of reelecting President Donald Trump and winning back control of the U.S. House of Representatives. 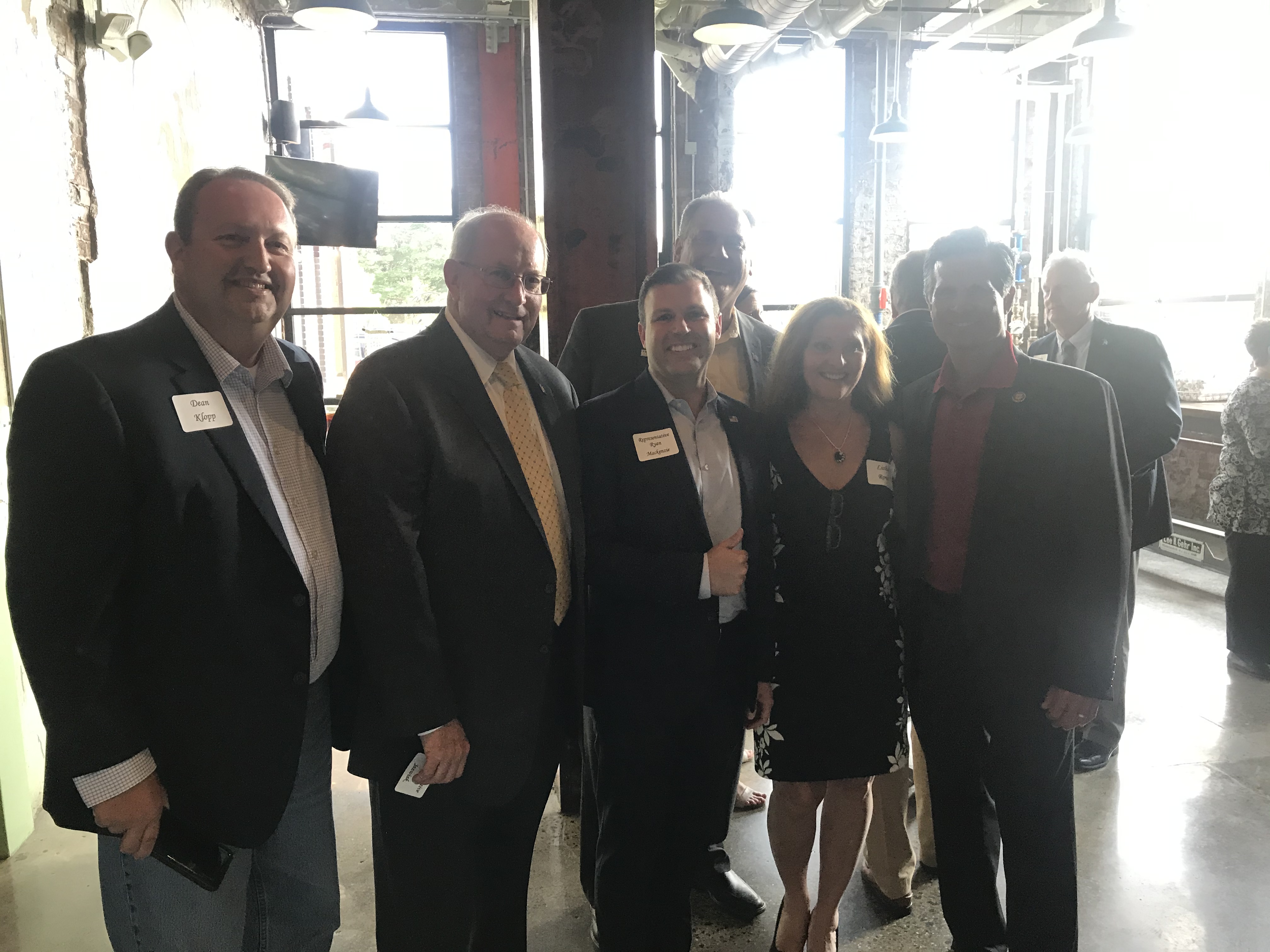 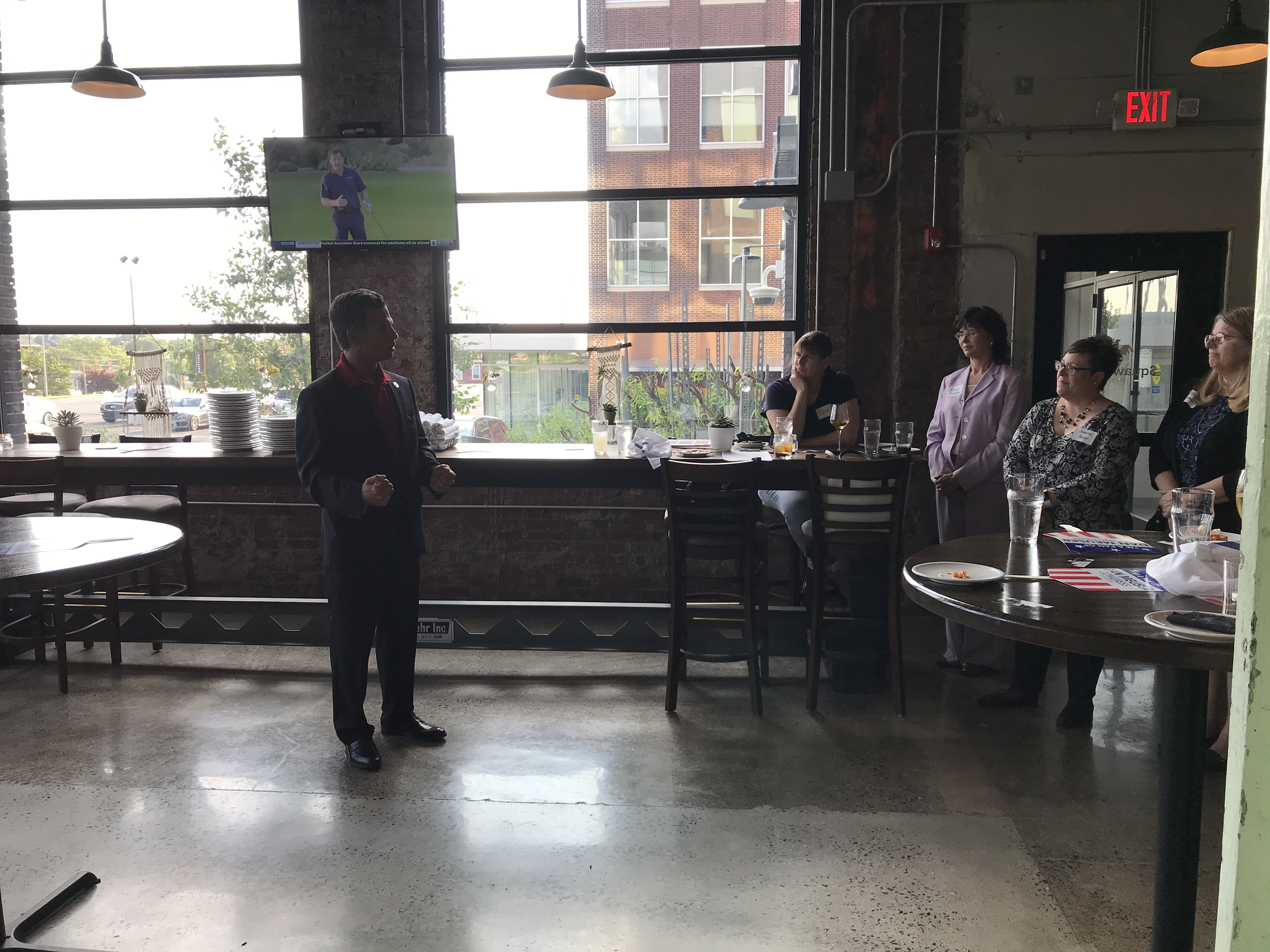 On Thursday evening, Meuser for Congress had a fundraiser hosted by Lucy and Larry Suravicz at their home. (Pictured below with Lucy, Larry and their daughters) Not only was this a very successful fundraiser, but it was also really one of the best events I have had on the campaign trail to date. The Carbon County leadership and public support for our campaign and the President are strong and I appreciate so very much the Suravicz's hospitality. Some of the guests included State Senator Dave Argall and his wife Beth as well as State Representative Doyle Heffley. It was a tremendous event and I want to thank everyone for coming out to support our campaign. 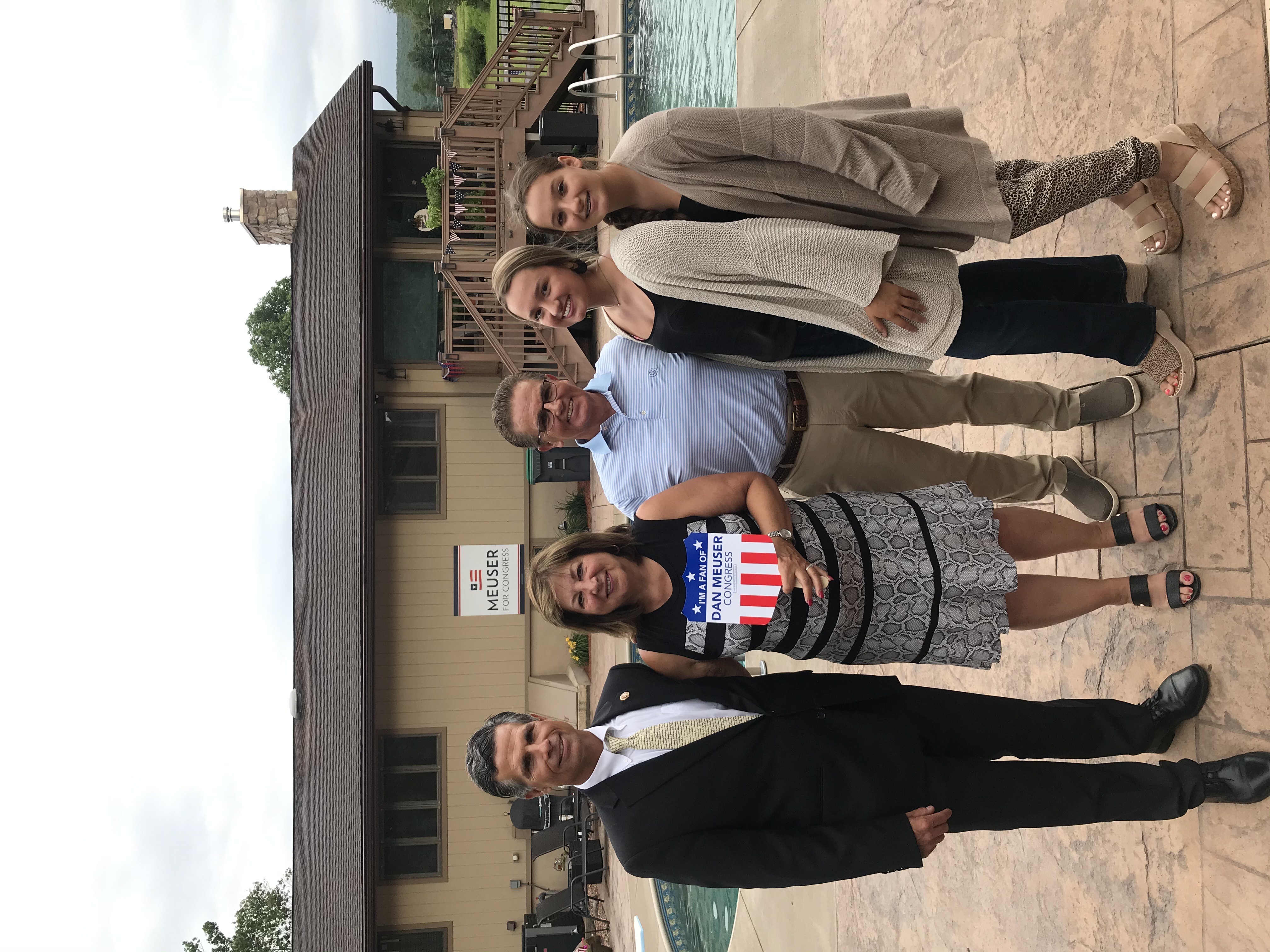 This weekend, I will be attending the Berks GOP Summer Picnic and the Fireman’s Relief Carnival in Bloomsburg.

IN NEWS YOU WON’T READ IN THE MAINSTREAM MEDIA:The White House breaks down just how much overregulation costs your family each year. For years, the D.C. Swamp has interfered in the lives of private American citizens by piling regulations on nearly every form of economic activity.

The regulatory process in Washington has created thousands of well-paying jobs for bureaucrats while costing everyone else time, money, and—for many—their careers.

This week, President Trump announced more results from his Administration’s historic regulatory relief efforts. The White House Council of Economic Advisers (CEA), for example, estimates that just 20 of the Administration’s deregulatory actions will save U.S. consumers and businesses over $220 billion per year.

What does that mean for your family?

Americans don’t need Washington to create more white-collar jobs for regulators. They need a government that operates efficiently, effectively, and inexpensively to protect citizens while providing an environment for the private sector to create jobs for workers across the country. It’s time to put American workers first.

I want to share an important note about the upcoming presidential election. Keep in mind that there are countless reasons why President Trump will win Pennsylvania again. From the fact that Joe Biden said he would ban fracking to saying Beto O'Rourke will lead his gun reform efforts to destroy the 2nd Amendment. Here are my top four reasons:

That is why it is so critical to re-elect President Trump and winning back control of the House this November. Pennsylvania will play the "keystone" role in accomplishing both. As a Congressional Co-Finance Chair for the Trump Campaign, I want you to know that I am a resource to those county parties and Trump organizations throughout Pennsylvania. I am available to speak at any gathering big or small to help ensure we win in November. Please feel free to contact our campaign at info@meuserforcongress.com or call Mike Barley at 717-576-6733.

Thank you and please have a fun and safe weekend.