Honor and enjoy Memorial Day weekend and welcome to our Week End Update.

Please take time to remember our brave fighting men and women of the American Armed Forces who made the ultimate sacrifice in defense of our nation. I will be attending a memorial service on Sunday at Fort Indiantown Gap and another service on Monday in Port Carbon. 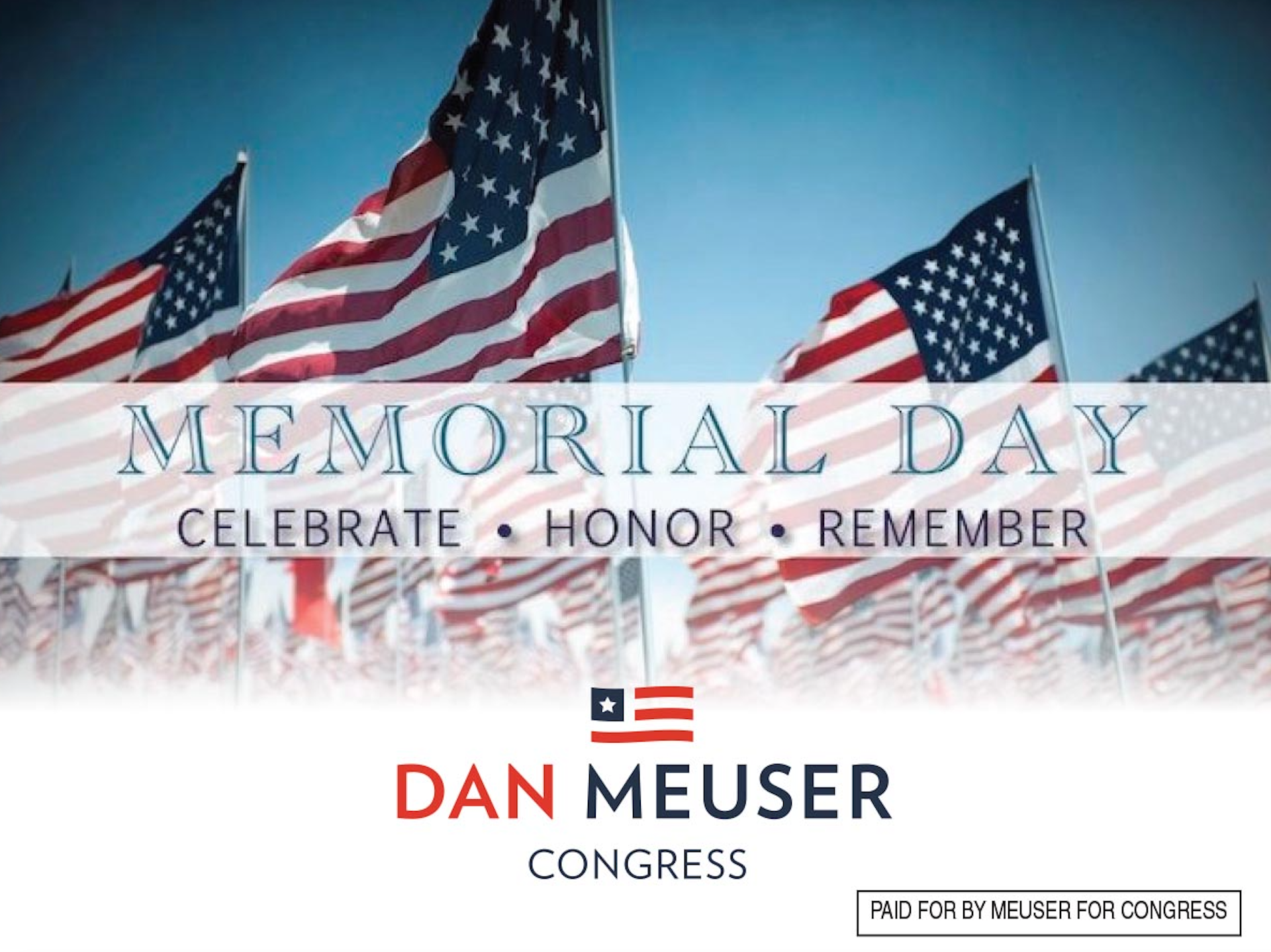 On Tuesday, the entire nation was watching an important Special Election taking place in Pennsylvania’s 12th Congressional District, just west of our District. In that election, voters elected Fred Keller in a landslide. Fred will be an excellent Congressman as he shares our conservative values and is a strong ally of President Donald Trump. I joined President Trump, Fred Keller and thousands of others for a get-out-the-vote rally in Montoursville. As with every Trump Rally, there were thousands in attendance and many hundreds waiting to get in to the venue. It was a clear sign that the work President Trump is doing to grow our economy by reducing taxes and eliminating unnecessary regulations, renegotiating unfair trade deals and keeping our country safe is resonating with Pennsylvanians. 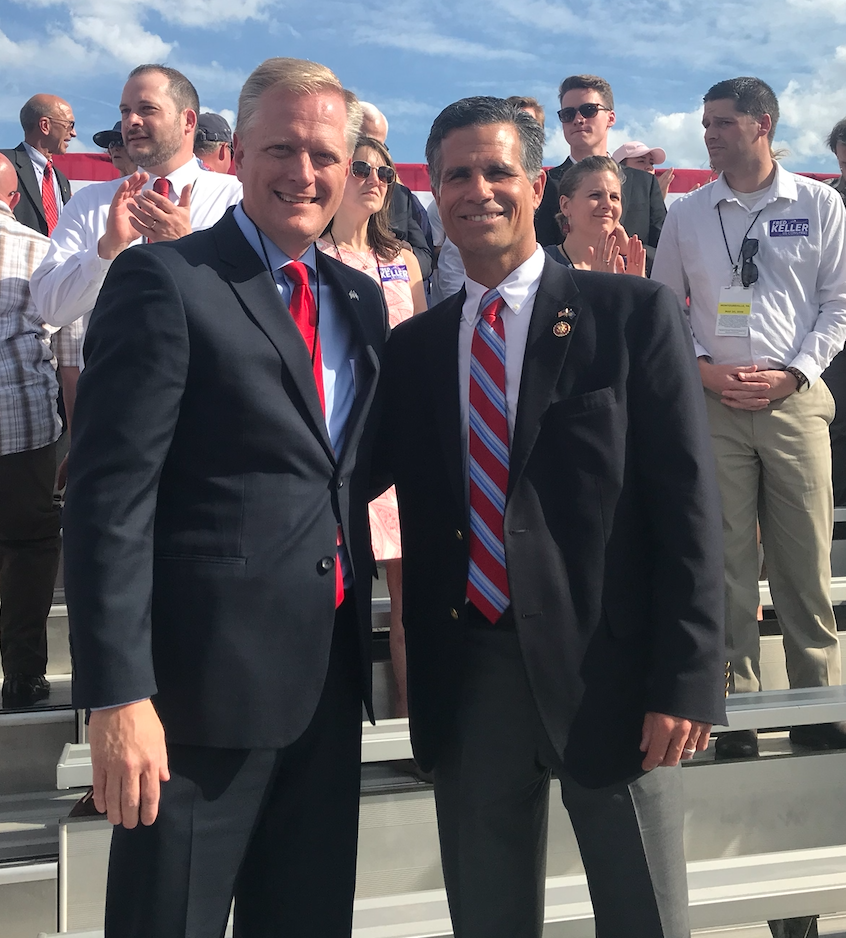 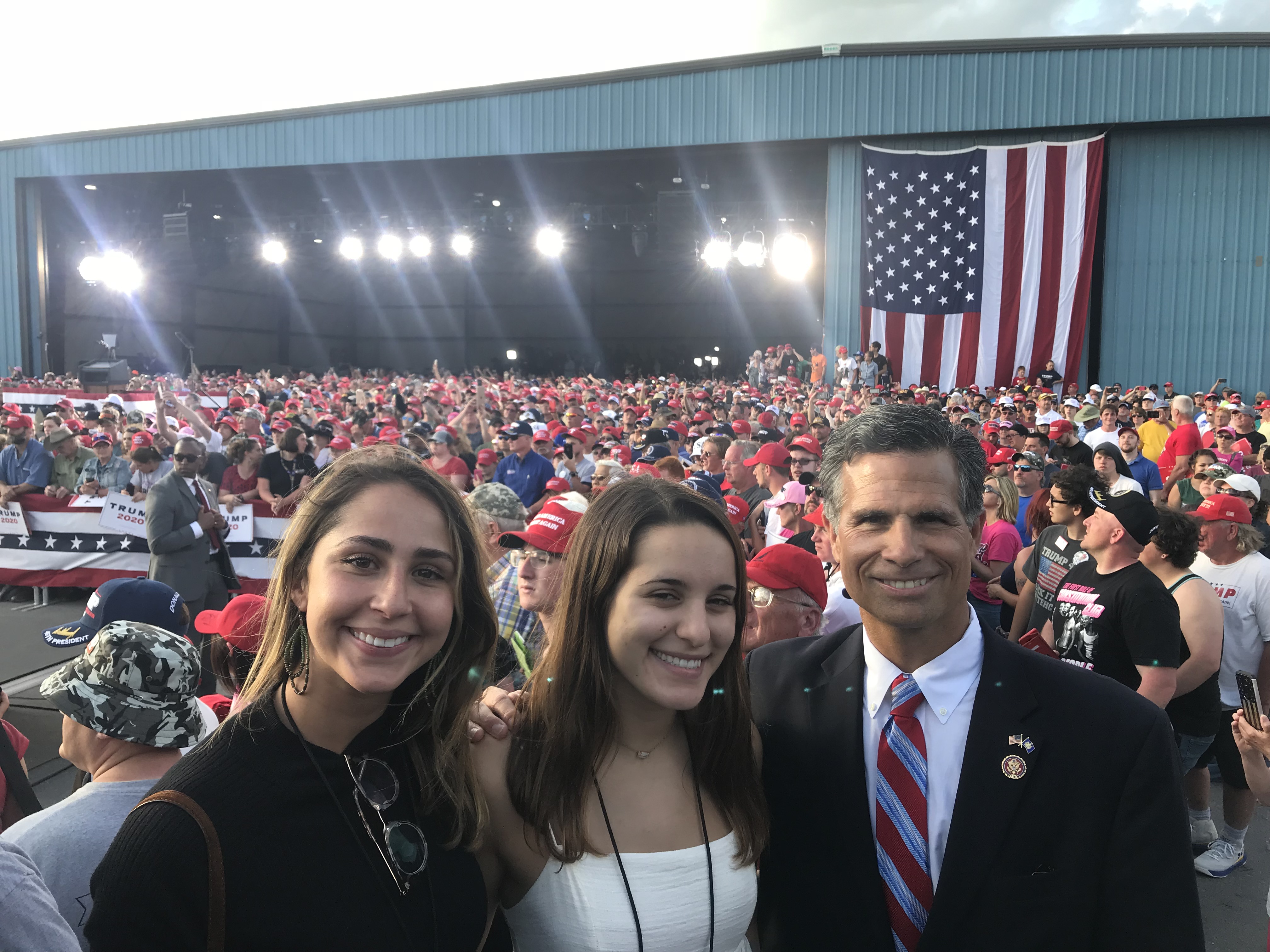 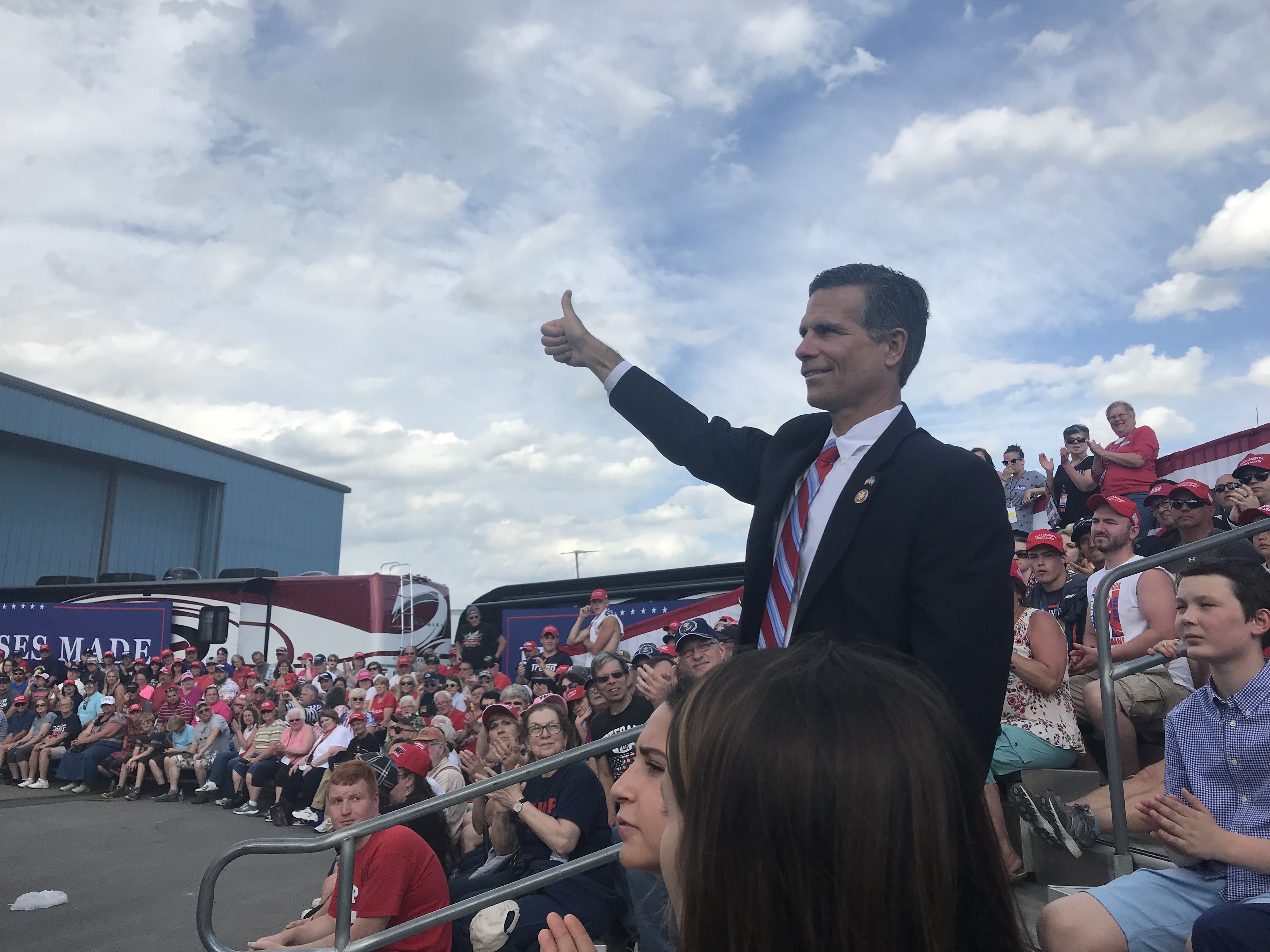 The morning after the rally, I joined Maria Bartiromo on Fox Business to discuss the President’s visit, how well he was received in Pennsylvania, the fact that the Democrats are pushing a big government agenda in Washington at the expense of getting any results for hardworking Americans. It truly appears that Speaker Pelosi would rather serve as Joe Biden's campaign manager than Speaker of the House. Click here to watch the segment. 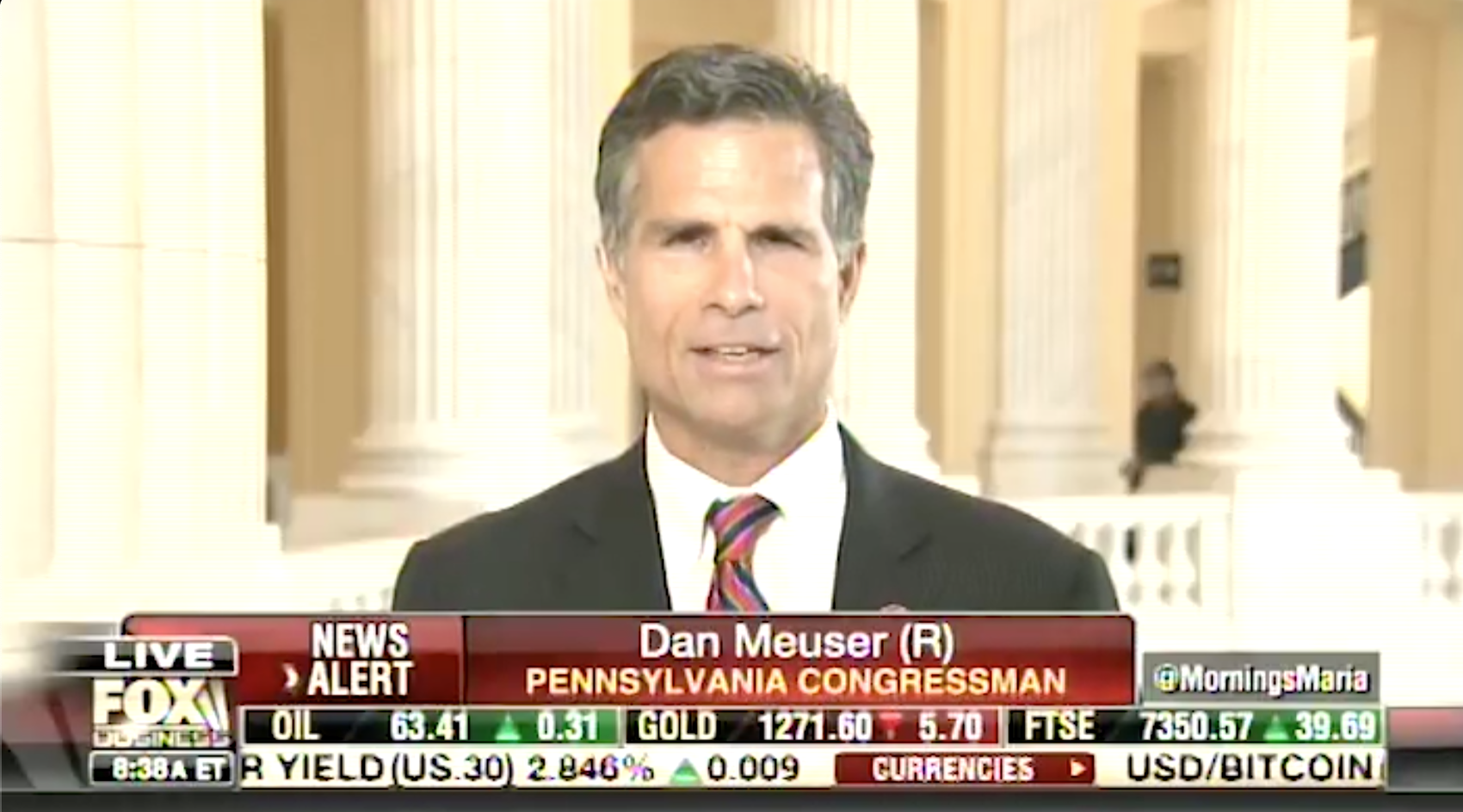 It was perhaps fitting that Primary Election Day marked the 100th year anniversary of the United States House of Representative's passing the 19th Amendment, which finally allowed women the right to vote in 1919. This legislation was spearheaded by a Republican Congressman. This historic event is an example of our nation striving to be even greater. We must never stop the pursuit to ensure everyone, regardless of age, gender, socioeconomic background or religion has the ability to achieve the American Dream. 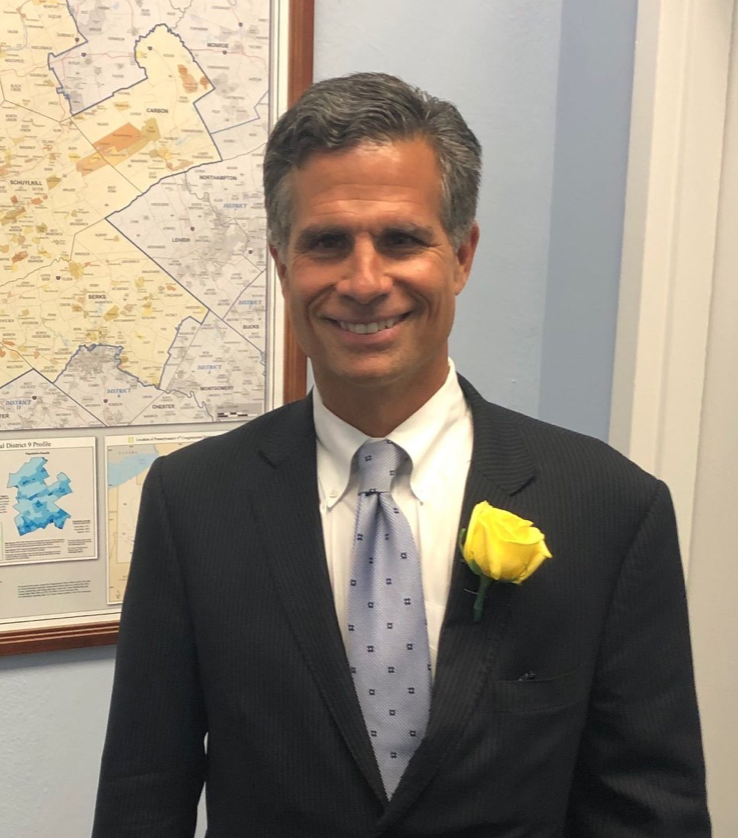 Last weekend, I attended the 2019 Pottsville Area Soap Box Derby. I want to congratulate all those who participated in this fun event. Our District is home to some serious Soap Box Derby competitors, including Brayden Ditzler, the 2018 Soap Box World Champion. In addition to the Derby, my office helped to celebrate the 24th annual Jim Thorpe Birthday Weekend in honor of the world’s greatest athlete, Jim Thorpe. 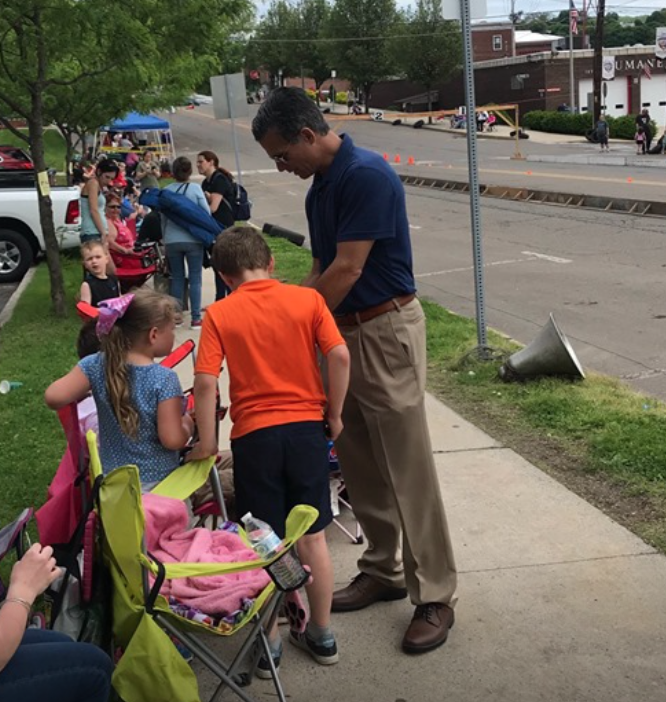 This week, officers from the Future Farmers of America paid a visit to our office in D.C. We discussed what it was like to serve in Congress and the current issues facing agriculture in the Commonwealth; These are some excellent young people and our state's agricultural industry is in great hands. 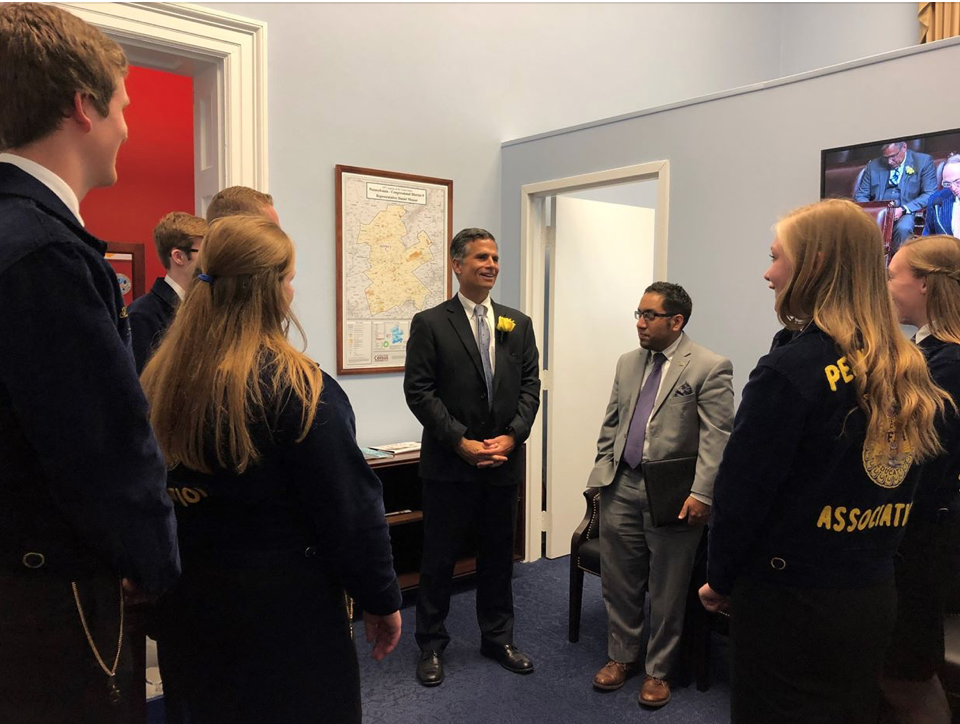 I had a special guest drop by my office this week, Jim Koch, founder of Sam Adams. Don’t worry, I told him his beer is very good, but it has nothing on a nice cold Yuengling. Th 9th Congressional District is home to the oldest and best beer in the nation. 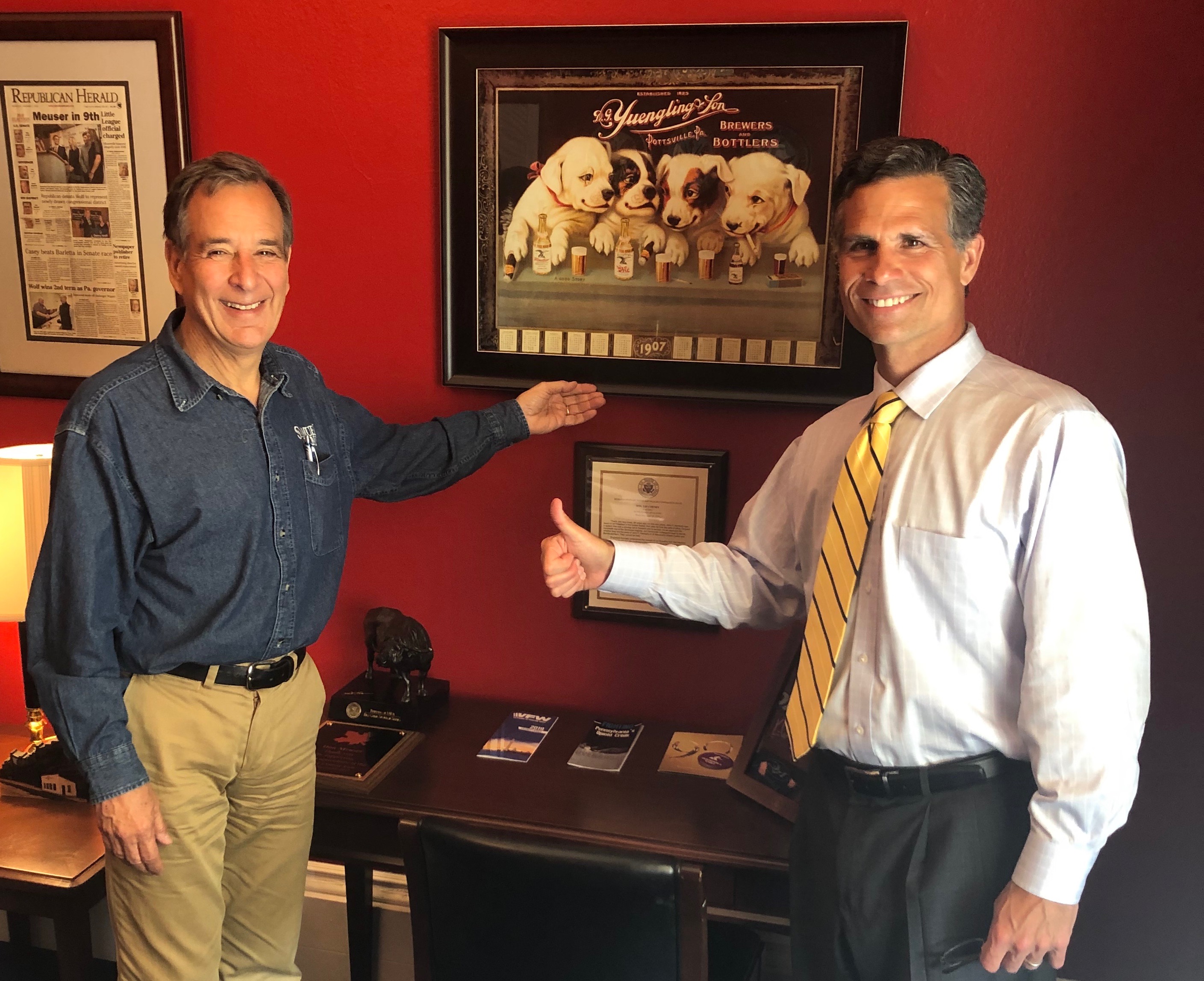 As a member of the House Education and Labor Committee, I attended a hearing where I discussed our nation’s demand for skilled labor in the workforce. We must work to close the skills gap in our labor force. Click here to watch my remarks. 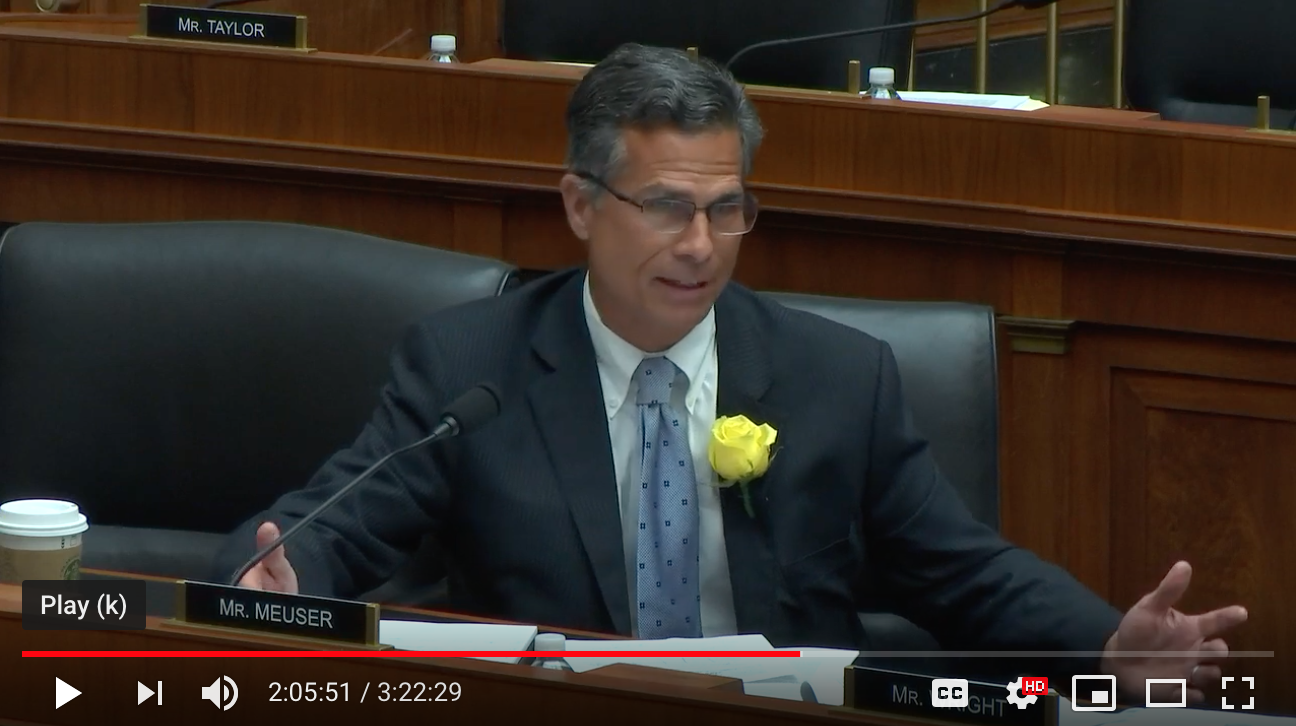 Later, as a member of the House Budget Committee, I attended a hearing regarding health care. I spoke about the negative impacts of a government-run, single-payer health care system. This socialist model of health care will only lead to less quality, fewer choices, higher costs and it would dramatically increase our taxes. Click here to watch my remarks. 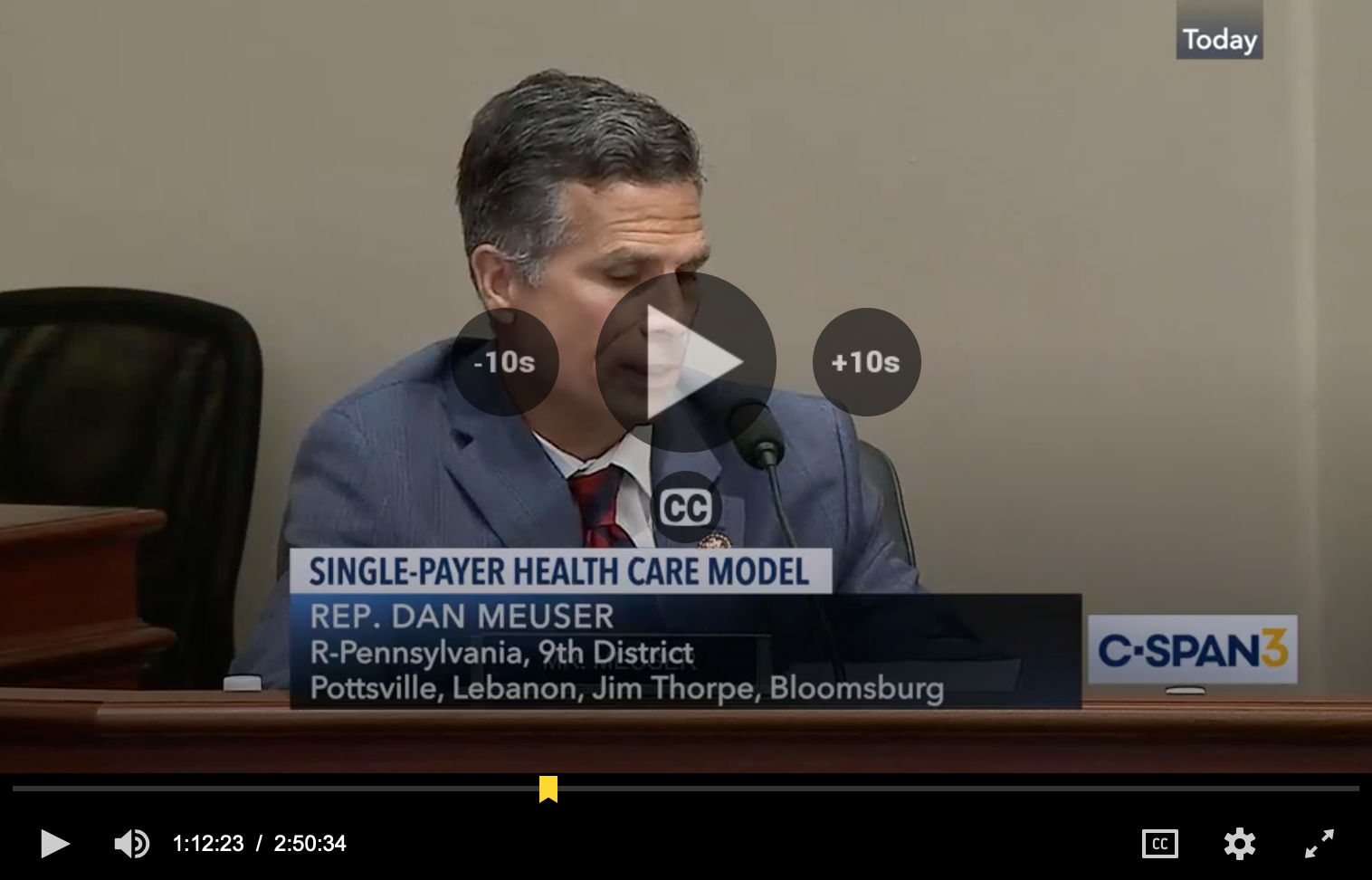 On the floor of the U.S. House on Thursday, we passed the SECURE Act. This bill helps American workers by making it easier to plan and save for retirement. Click here to read more about the legislation.

Last evening, I attended the first State of the County Dinner hosted by the Carbon County Chamber. I was pleased to discuss current affairs in Washington. It was also great to see State Representative Doyle Heffley and County Commissioner Wayne Nothstein. 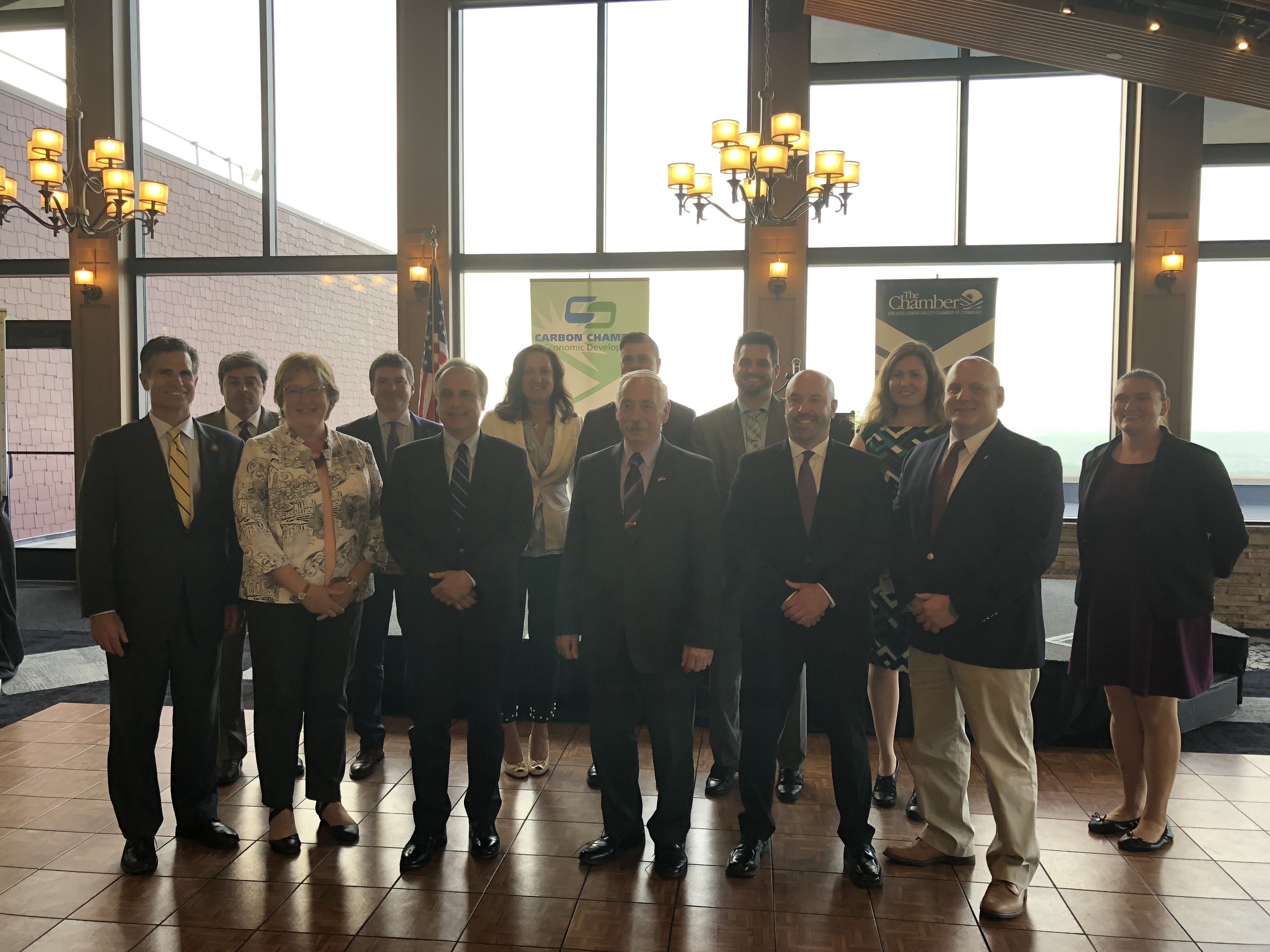 In News You Won’t Hear in the Mainstream Media: If you are looking for a perfect example of how the disfunction of the Democratic leadership in Washington is hurting hardworking Americans, this is it. On Wednesday, President Trump invited Democratic leaders Senator Chuck Schumer and House Speaker Nancy Pelosi to the White House to discuss bipartisan solutions to fix our nation’s infrastructure needs. Unfortunately, Congressional Democrats chose politics over working for Americans. Just prior to the meeting, Speaker Pelosi lobbed more accusations at the President alleging he was “engaged in a cover-up.” This is a very serious accusation and it also seriously inaccurate.

For Speaker Pelosi and Socialist Democratic activists in Congress, the facts don’t matter. But the facts matter very much to me;

On the storm water issue, I am continuing to seek answers from the Environmental Protection Agency (EPA). Here is a link to a letter we sent to the EPA. Here is a link to their responses. The EPA still has not answered my questions. I want justification for these outrageous fees and a realistic solution for the hardworking people of our District.

Again, honor and enjoy Memorial Day and I will see you soon.