Pennsylvania, like the nation, is dealing with a historic and unprecedented public health and economic crisis. Throughout the COVID-19 pandemic, President Trump has instituted an approach to mitigate the effects of the virus, specifically through partnerships with the private sector. Unfortunately, some governors have deviated from this path in developing plans for their states. This is especially true in Pennsylvania, where Governor Tom Wolf has operated with little transparency and failed to be inclusionary of important industry stakeholders, county commissioners, state legislators and local community leaders as he shut down the state.

After more than eight weeks, several counties citing professional, data-based reasoning began expressing a desire to reopen safely. In response, the Governor publicly called them “cowards,” and threatened to withhold federally-provided coronavirus-related funding. Rather than dismissing them, why not hear them out? County commissioners and state legislators are in constant contact with dozens of their constituents each day - they understand the serious nature of this crisis and the economic ramifications a prolonged shutdown has already had on local livelihoods. The Governor’s response was disturbing and illustrated a lack of understanding of the concerns of hardworking employees and employers who want to safely return to work. Elected officials must have the wisdom to admit that decisions made behind closed doors can be misguided. Fortunately, it is not too late.

Pennsylvania should pivot from its current path towards one that is based upon health and safety and inclusionary of the private sector. Businesses value their employees and have a vested interest in their health and well-being. Why not bring them to the table? Everyone wants to protect public health, but they also want to provide for their families. Pennsylvanians have mainly been confined for eight weeks with no end in sight and are rightly frustrated and anxious. A desire to reopen is not rooted in a rejection of scientists and public health experts but is based on the understanding that if these policies continue, there may be no life to go back to. We cannot let livelihoods die. There is a smarter plan and it must be adopted. Now is the time to change course, be receptive to better ideas and implement a plan that gets the commonwealth safely back to work, before it is too late.

This week, I conducted a skype interview with Neil Cavuto on Fox Business. We discussed how COVID-19 has impacted Pennsylvania, the shutdown of our state's economy and the real consequences it is having on small businesses and hardworking Pennsylvanians. Click here or on the image below to watch the interview. 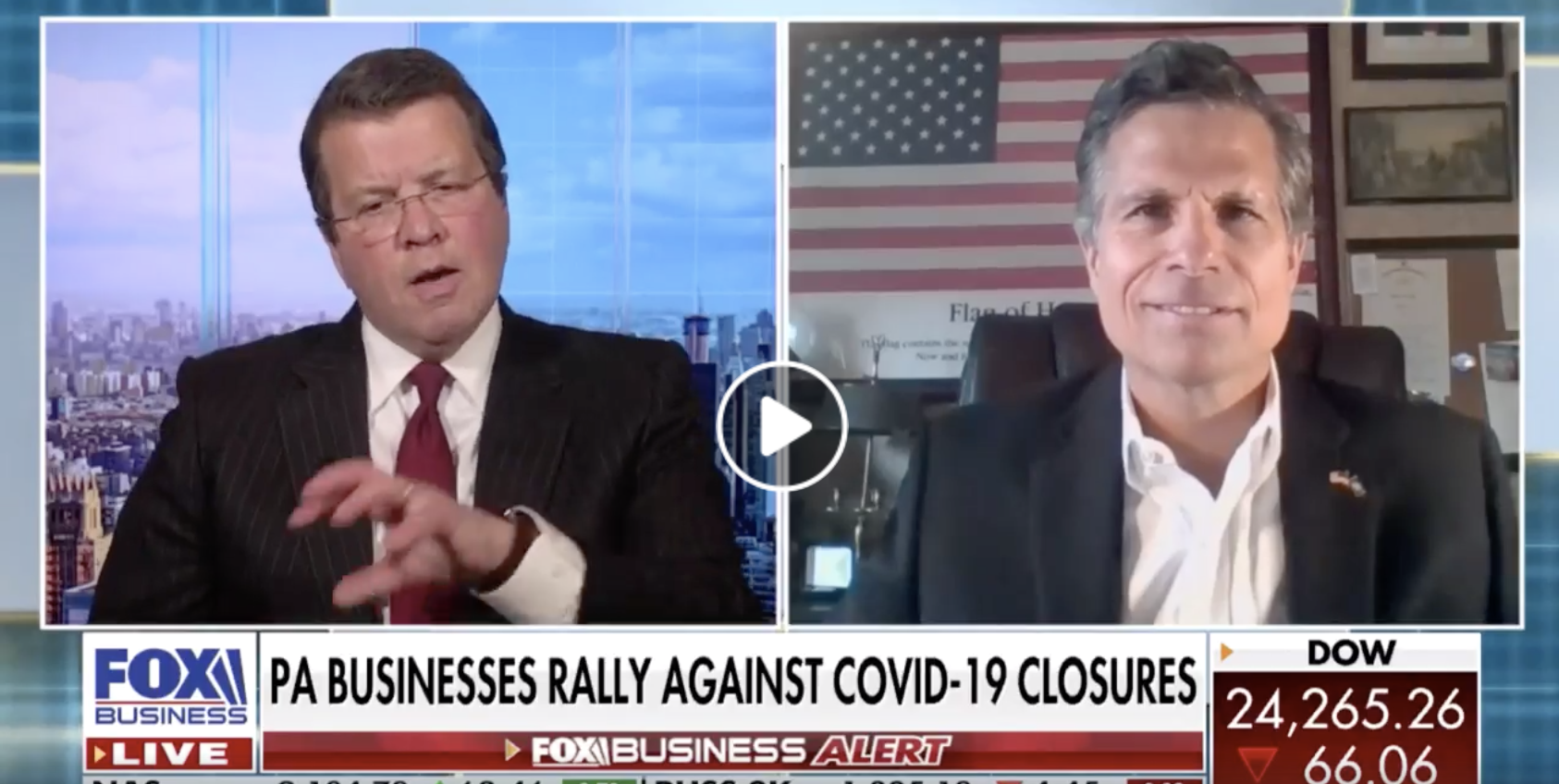 Later this week, I visited with Stuart Varney on Fox Business’ Varney & Co. We previewed President Donald Trump’s visit to Allentown and the inclusionary, thinking-forward plan to balance safety while restarting the economy. We talked about the difference between President Trump’s approach and how the shutdown of Pennsylvania’s economy has negatively impacted small businesses. We also discussed why I know President Trump will win Pennsylvania, especially against Joe Biden, who has adopted the far-left socialist policies of Senator Bernie Sanders, including the Green New Deal and a ban on the natural gas industry. Please click here or below to watch. 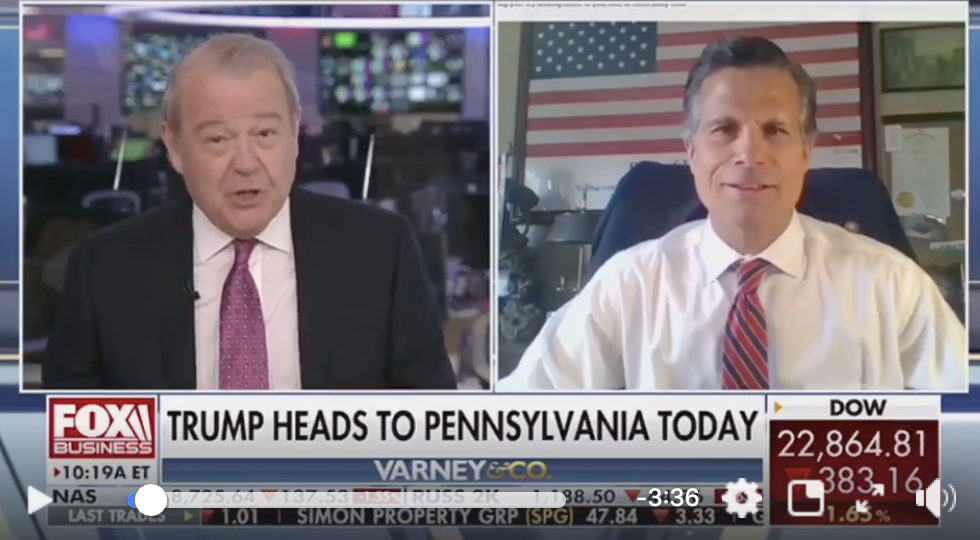 After the interview, I welcomed the President to Allentown with the following video message. Please click here to watch. It was an honor to greet President Trump in Pennsylvania. I met him, alongside Congressmen Scott Perry, Brian Fitzpatrick and Fred Keller, on the tarmac after Air Force One landed and before he visited Owens and Minor. They are a company that is providing equipment to protect Americans during the COVID-19 pandemic. He delivered great remarks and his optimistic, thinking-forward approach on how we can fight COVID-19 while getting back to work safely. It was great to have the President back in the Keystone State. 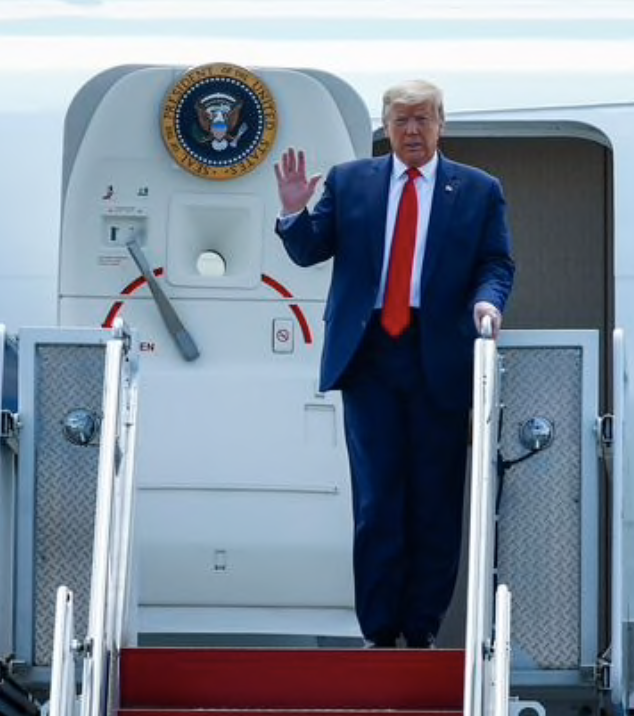 Yesterday, I conducted an interview on the Bloomberg News' podcast Balance of Power podcast to discuss the President's recent visit and the current situation in Pennsylvania. Click here or on the image below to listen to my interview. (Interview begins at 35-minute mark)

I participated in a call with Trump-Pence 2020 Chair Bernadette Comfort and this year's Anne Anstine Leadership class to discuss the latest news in Washington and what it is like being in U.S. Congress. I am a big supporter of the Anne Anstine Leadership Program, which helps train and prepare women for careers in government. Many graduates of this program have become some of our most active Pennsylvania politicos, including some that have gone on to become state senators, state representatives, judges, or the countless that have been elected to local office. I was happy to support this program and I am looking forward to joining them again next year in person.

Shelley and I joined State Senator John Gordner and others in hosting another Take Out on Us events in Danville. We served over 1,000 meals, primarily for frontline workers throughout Montour County and at Geisinger Medical Center. I want to thank the owners, Theresa & Evan Willard and the staff of LT Evans Eatery and Drafthouse in Danville for preparing the delicious food. 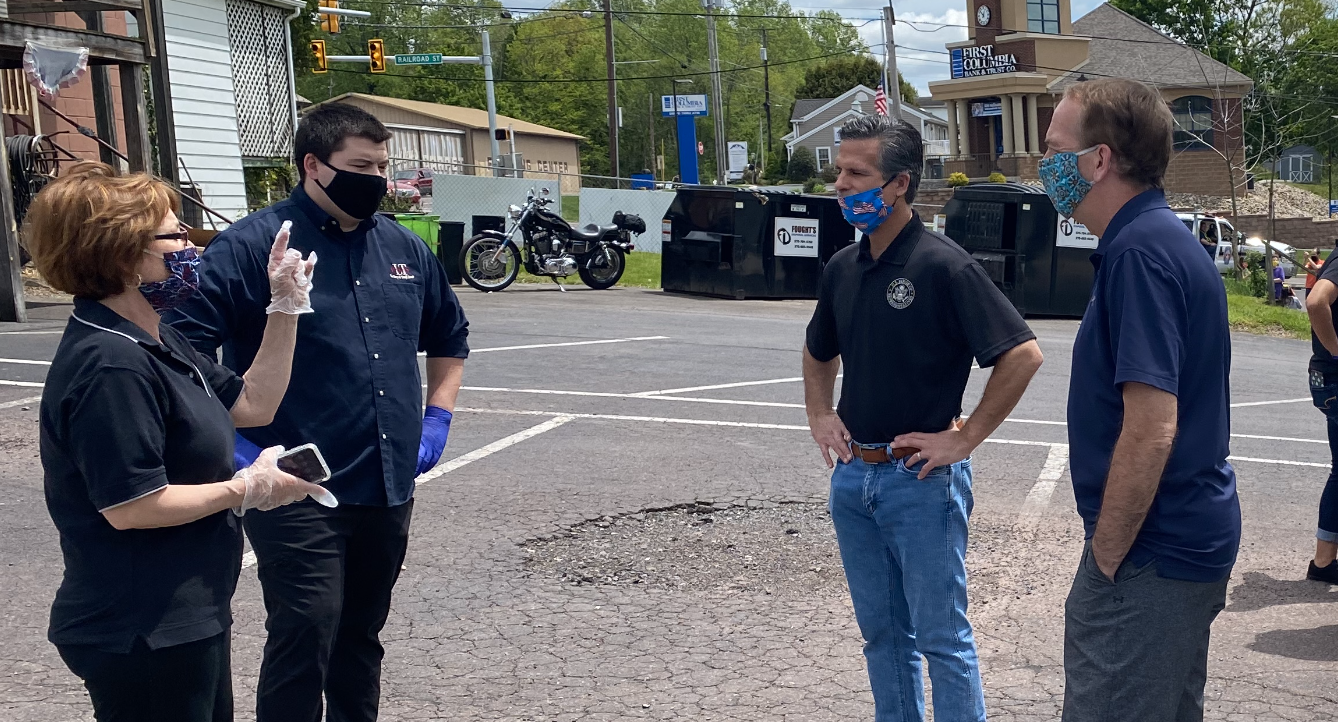 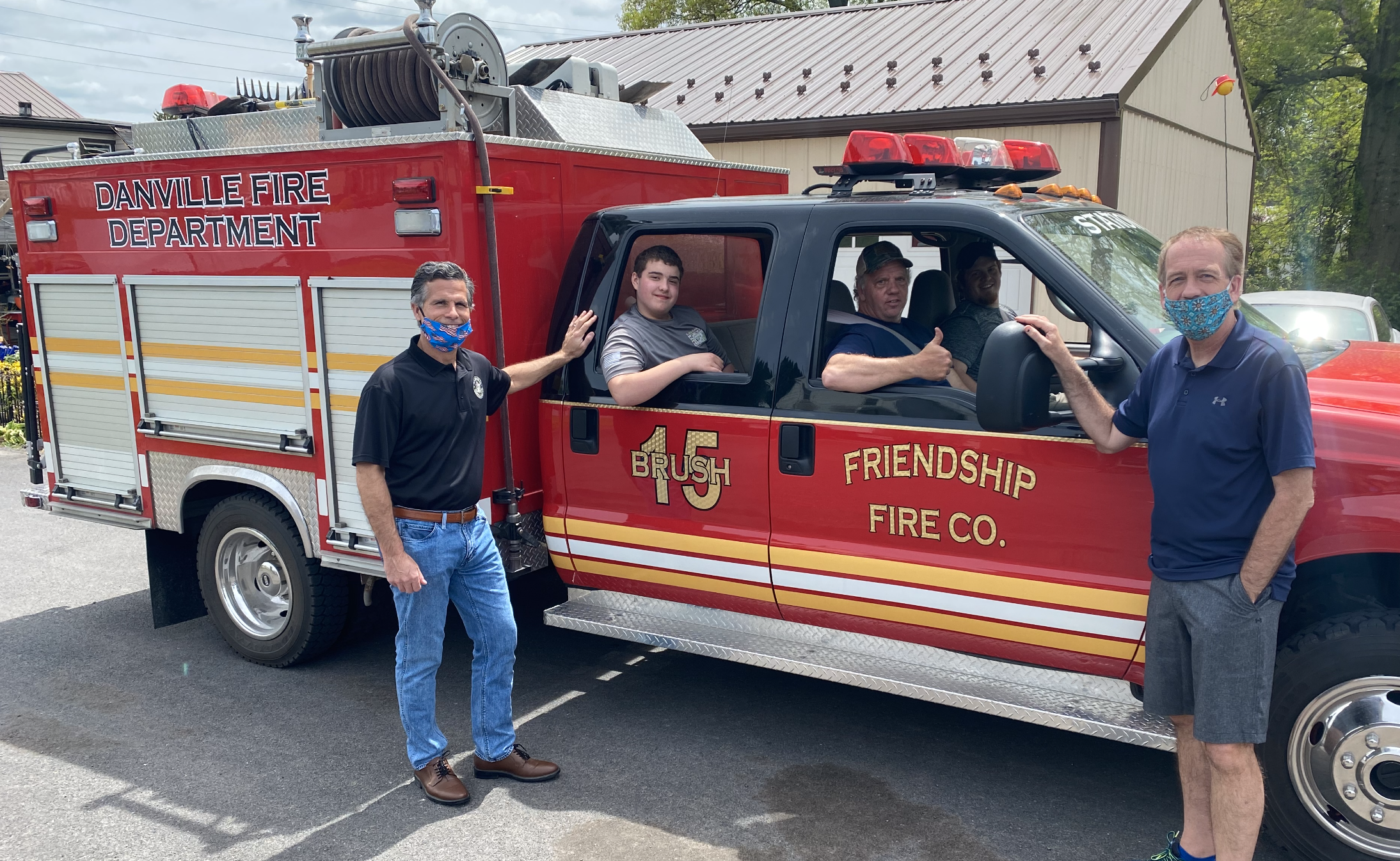 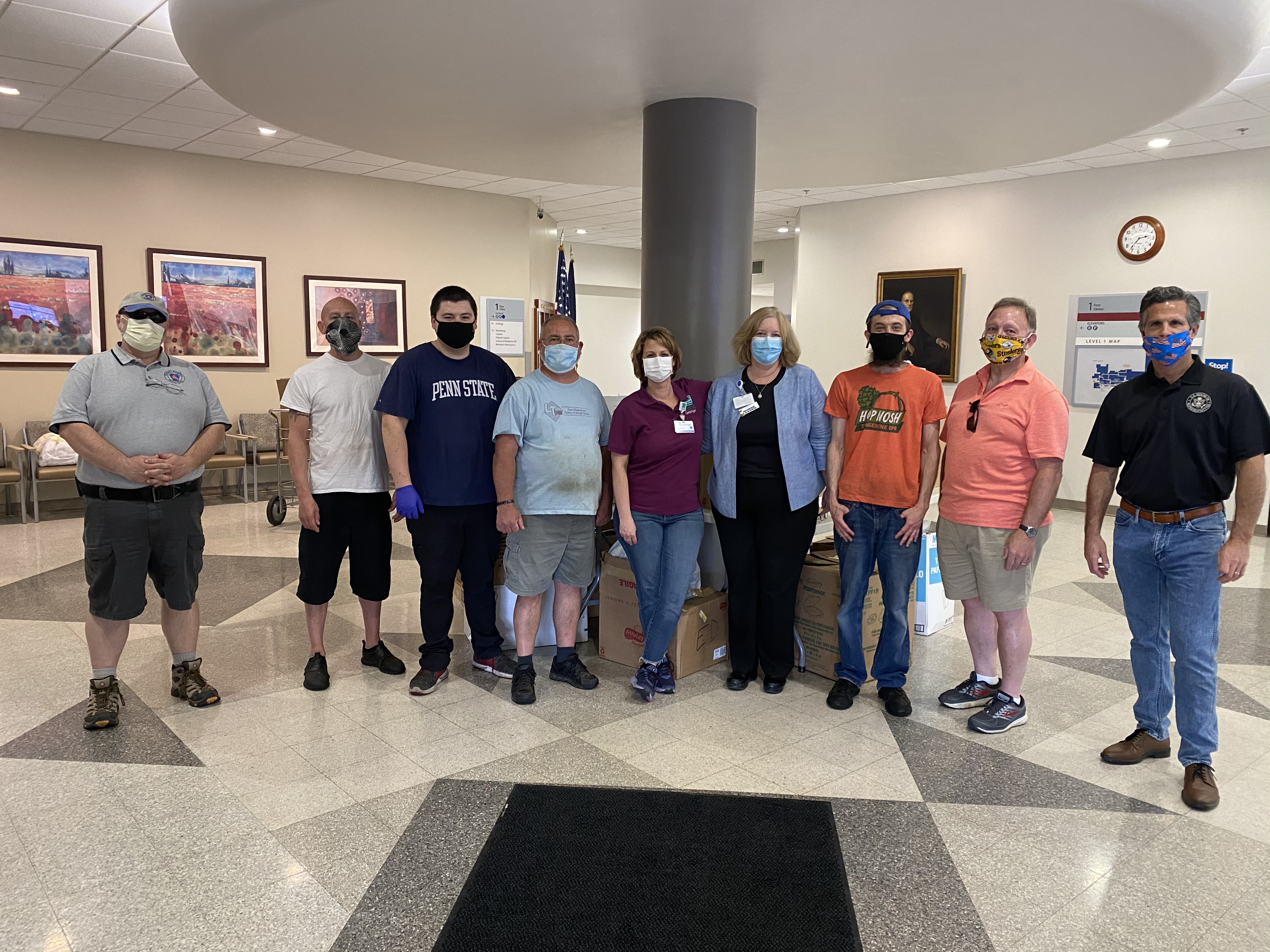 IN NEWS YOU WON’T HEAR IN THE MAINSTREAM MEDIA: Yesterday, with the help of her Democratic members, Nancy Pelosi passed a rule that has never before passed the House of Representatives in the history of our country. A Pelosi-led rule change allows for proxy voting and remote committee meetings. This new rule allows a single member to carry 10 proxy votes. To put this in perspective, 20 members carrying 10 proxy votes each could pass a bill in the U.S. House of Representatives. This is BIG GOVERNMENT policies at its worse and is unconstitutional. Article 1, Section 5 of the U.S. Constitution clearly states that a quorum is necessary for a law to be passed. Speaker Pelosi ignored the Constitution and so did the members who supported this rule change.

Furthermore, this vote was taken as most of America is reopening for business. It’s sad that as the country takes steps to move forward from the pandemic, Speaker Pelosi is taking Congress backward. It is also important to remember that from our founding fathers through the 1800's into the early 20th century, in order to represent their constituents and to cast a vote, members of Congress traveled to Washington, D.C. by horse and wagon in extreme weather, during wars, during pandemics and illnesses. Can you imagine what our predecessors, both Republican and Democrat, would think of this new rule?

The truth is that Speaker Pelosi is using the pandemic to orchestrate a power grab plain and simple as she works to pass an extreme, socialist agenda. Look no further than her passing a $3 trillion stimulus bill filled with liberal policies without input from the general public or Republicans.

Since the beginning of this year, Speaker Pelosi has shutdown Congress over her refusal to accept that our nation has a border security problem. Next, she falsely attempted to paint the President as a Russian agent and proceeded with impeachment efforts despite having zero evidence to prove her case. Now she is spending her time on blame politics and bills going nowhere. With this record, we should all highly resolve to win for Republicans back control of the U.S. House. The U.S. Democrat leadership in the House cannot be trusted to lead.

In a moderate suburban district, Republican Congressman-elect Mike Garcia bested Democratic candidate Christy Smith in California’s 25th Congressional District Special Election by DOUBLE DIGITS. This was accomplished even as the Democrats attempted to CHEAT in the days leading up to the election. As a result of the pandemic, the Democrats who control the elections mailed every registered voter a mail-in ballot. As the ballots were returned showing a Republican advantage, in-person polling places were open in areas with the largest percentages of Democratic voters. Their last-minute plan to steal the election thankfully failed.

Rather than credit the Republican candidate’s stellar resume as a former fighter pilot who flew missions in Iraq and never had previously run for office. Rather than credit the excellent campaign that was executed. Rather than continue the narrative that this was a proxy vote on President Donald Trump’s leadership. Instead, Democrats went on defense, spinning a false narrative of low voter turnout as being the culprit for this historic loss. Republicans haven’t flipped a congressional district in California since 1998. (NOTE: The 25th Congressional District is just outside of Los Angeles - Map below) 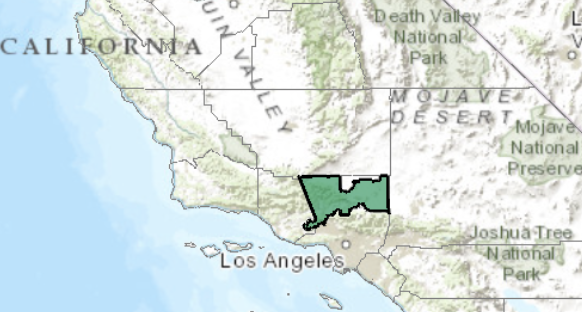 List of Democrats blaming low turnout for their May 12 special election loss with the help of their allies in the mainstream media:

Washington Post (May 6. 2020): “Democrats are setting expectations low for the special election, citing the historically low turnout by their voters in these one-off contests.”

US News (May 13, 2020): “Democrats chalk it up to an unpredictable race with low turnout that was held in the middle of a pandemic.”

Newsweek (May 11, 2020): “The only way Republicans can win a California seat is in an extremely low-turnout election in the middle of a pandemic.”

Here are the facts:

Bottom Line: This was a historic victory. It proves that President Trump’s electoral position is stronger than the mainstream media polls would suggest. It is evidence that Republicans can win in competitive suburban districts. It also shows that Republicans can and will take back control of the U.S House this November. It has been a very exciting week for Congressional Republicans and I want to congratulate both new members.

As a reminder, the Pennsylvania Primary Election is on June 2nd and although I am not opposed in the Primary, I do humbly ask for your vote. If you can't make it to the polls, the deadline to request a mail-in or absentee ballot is May 26. The ballot must be received by your local board of elections by 8 pm on June 2nd. Click here to request a ballot online. 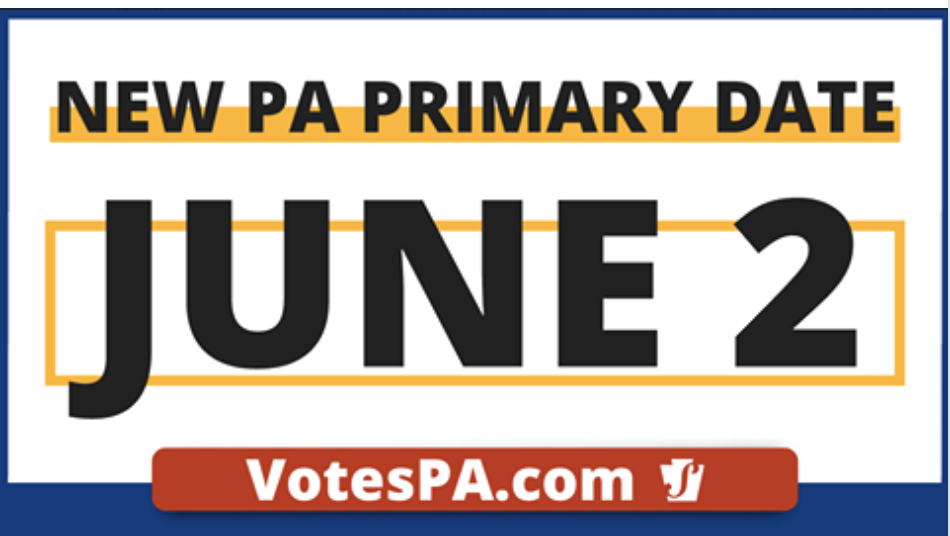 I hope you have a great weekend, stay safe and we will see you soon.