The nation's attention remains focused on Russia and Vladimir Putin's continued invasion of Ukraine. Ukraine continues to show unbelievable resilience against an overwhelming Russian force. President Zelenskyy has proved to be an example to the world for his bravery and passion in the face of a tyrant hellbent on destroying Ukraine. Putin's actions are egregious as his forces have taken to despicably attacking women and children.

I joined Fox Business Tonight to discuss President Zalenskyy's requests for additional support from NATO and the United States. While the Biden administration continues to show weakness, the answer is strength. The only one who should be fearful is Putin. He should be concerned that his vaunted military is not performing very well. The United States must stand with Ukraine. I am pleased that we have finally banned U.S. imports of Russian oil. America's national security is directly impacted by our nation's ability to be energy independent. Click here or below to watch my interview.

I joined Newsmax's America Tonight and reiterated that America should commit the necessary weapons to Ukraine and impose all necessary sanctions on Russia with one clear objective in mind… Ukrainian Victory. Click here or below to watch. 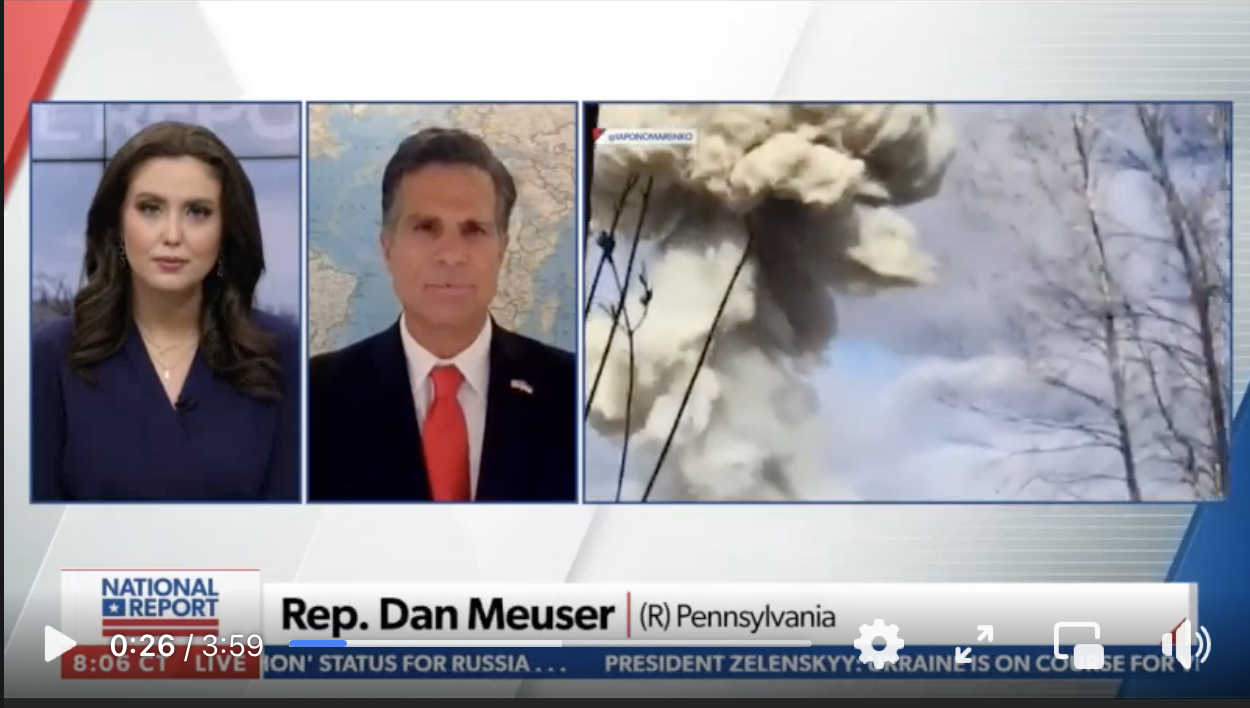 While other countries are rallying around Ukraine, it is fair to question if we are doing enough to protect Ukraine and the interests of our nation and our allies. Poland reached out to the United States government with an offer. They told us they would give Ukraine fighter planes to fight the Russians if the United States agreed to help them procure replacement aircraft. Unfortunately, the Biden administration chose to decline this offer. I, along with many of my colleagues, believe Biden should reconsider this decision and offer Ukraine the tools they need to defend themselves. I joined Fox Business's Varney & Co. to discuss. Click here or below to watch my interview. 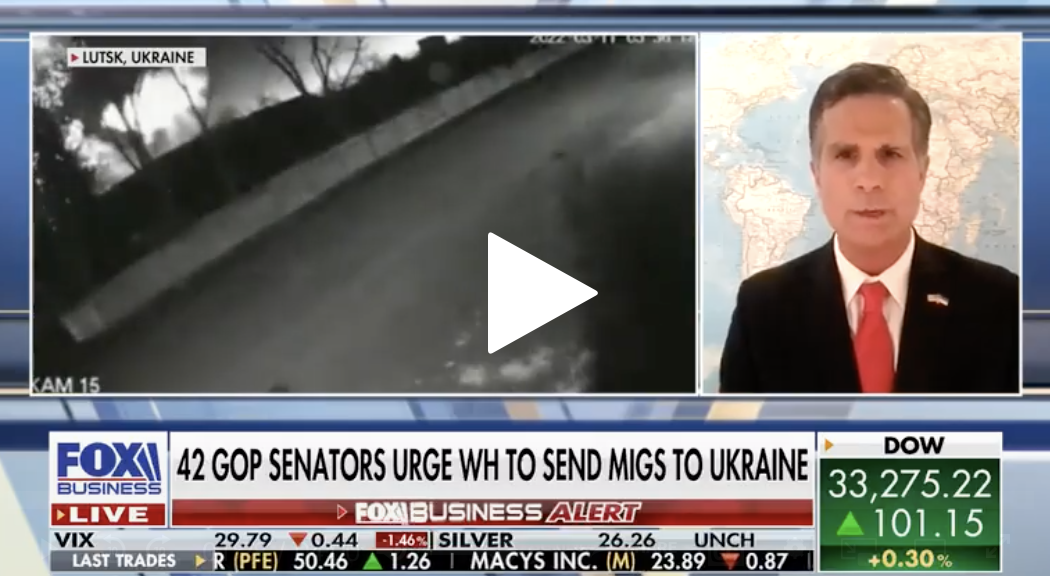 Lastly, I joined C-Span's Washington Journal to discuss the Russian invasion of Ukraine and other important issues. Click here or below to watch. 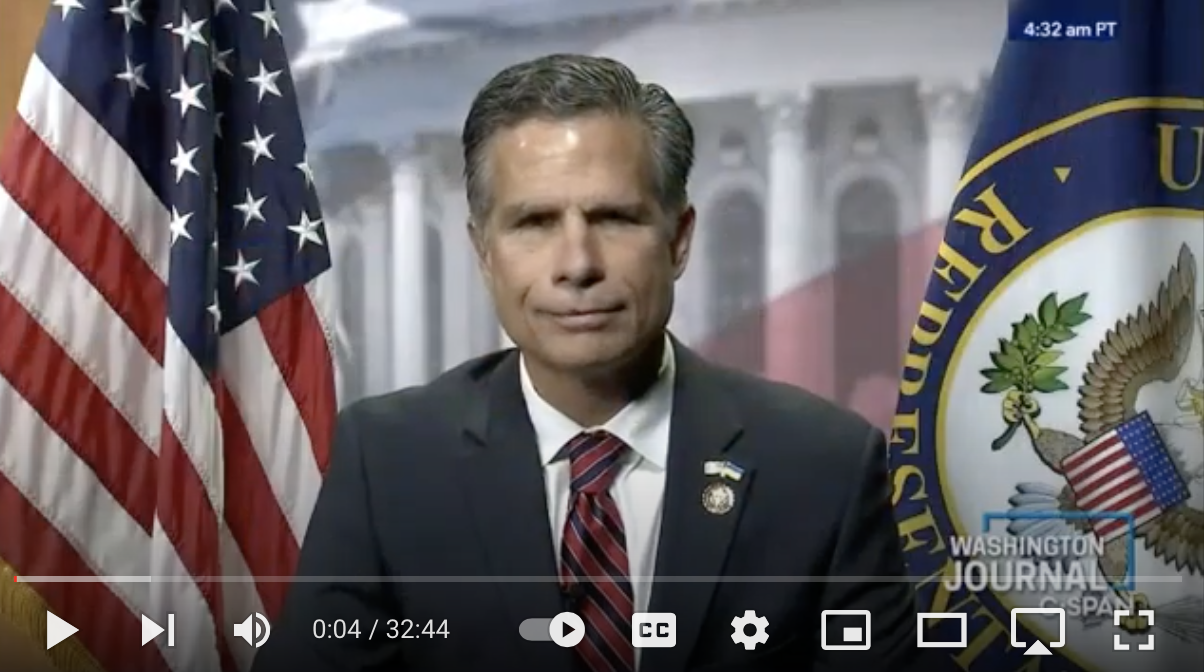 Unfortunately, the Biden administration has led from a position of weakness repeatedly. Appeasement is not smart foreign diplomacy. Instead, we should take a page from former President Ronald Reagan, who implemented a foreign policy agenda of "Peace through strength." For generations, the United States has brought order to the world by walking softly and carrying a big stick. Unfortunately, the Biden administration is leading from behind. Click here to listen to relevant comments from one of America's greatest leaders, President Ronald Reagan. This is precisely why we need a Free Ukraine. 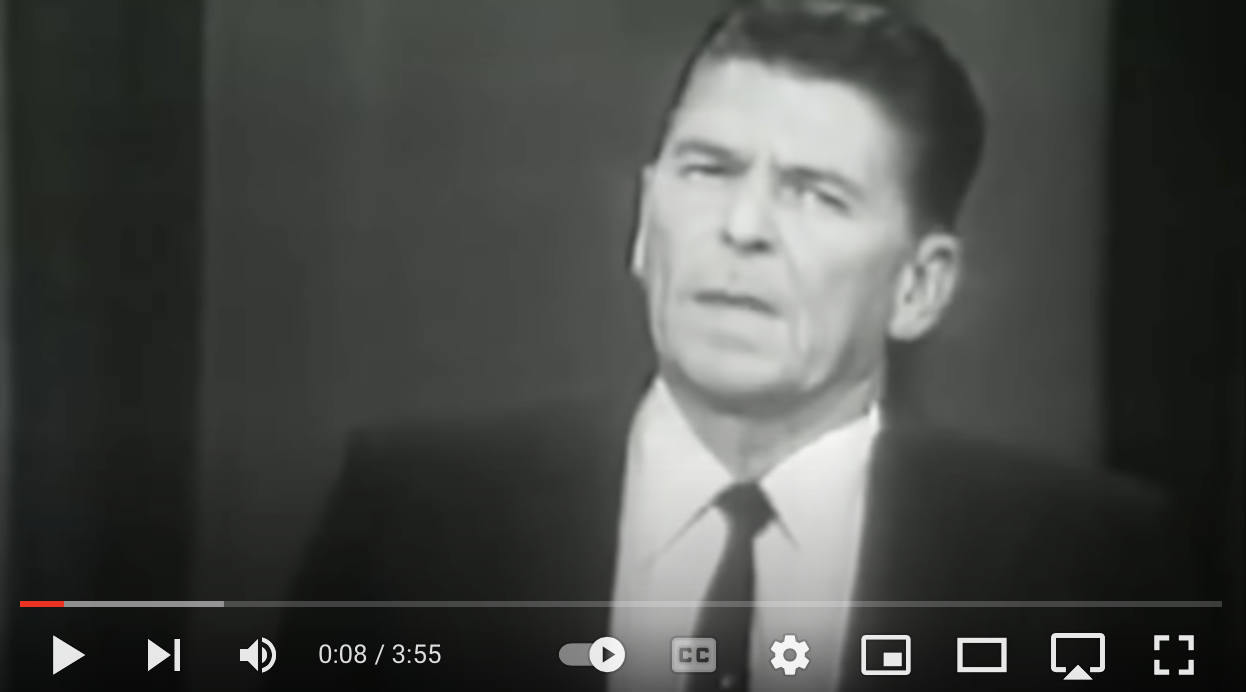 There is no doubt that the safest route is usually the riskiest path. We must do something to get Putin to fear us, rather than continue to react to his actions. This is very serious stuff... at the highest level. However, Putin must understand the full force of his opposition, and the long-term consequences of his actions. If we fail to act, and he does something else... China will follow. A Free Ukraine will mean so very much to establish the “world order”, for perhaps a generation. The United States must commit to producing its own energy and providing full supplies of all weapons to Ukraine. We must join together to fight against Putin, a war crime committing aggressor.

This week, U.S. Congress voted to restore and enhance defense spending, cut by the Biden administration, and provide $13.6 billion in aid to Ukraine to fight back against the Russians. While I remain uncomfortable with programs funded by this bill, I felt it was necessary to support our defense budget funding and provide critical aid to Ukraine.

While our nation's dependence on foreign oil is a national security issue, so is Biden's open border policy. In December, I raised issues related to the Biden administration's ghost flight policy. This issue is related to the flying of illegal immigrants to various parts of the nation, at night, without informing local officials or the American public about who these people are or where they are headed. That led to my sponsorship of the Immigration Transparency Transit Notification Act. That bill is co-sponsored by 56 of my colleagues. The law forces the Department of Homeland Security and the Department of Health and Human Services to notify federal, state, and local officials about these relocations – both before they happen and in quarterly reports to Congress. Former Speaker of the House and Pennsylvania native Newt Gingrich recently penned an editorial supporting our legislation. Click here to read more. 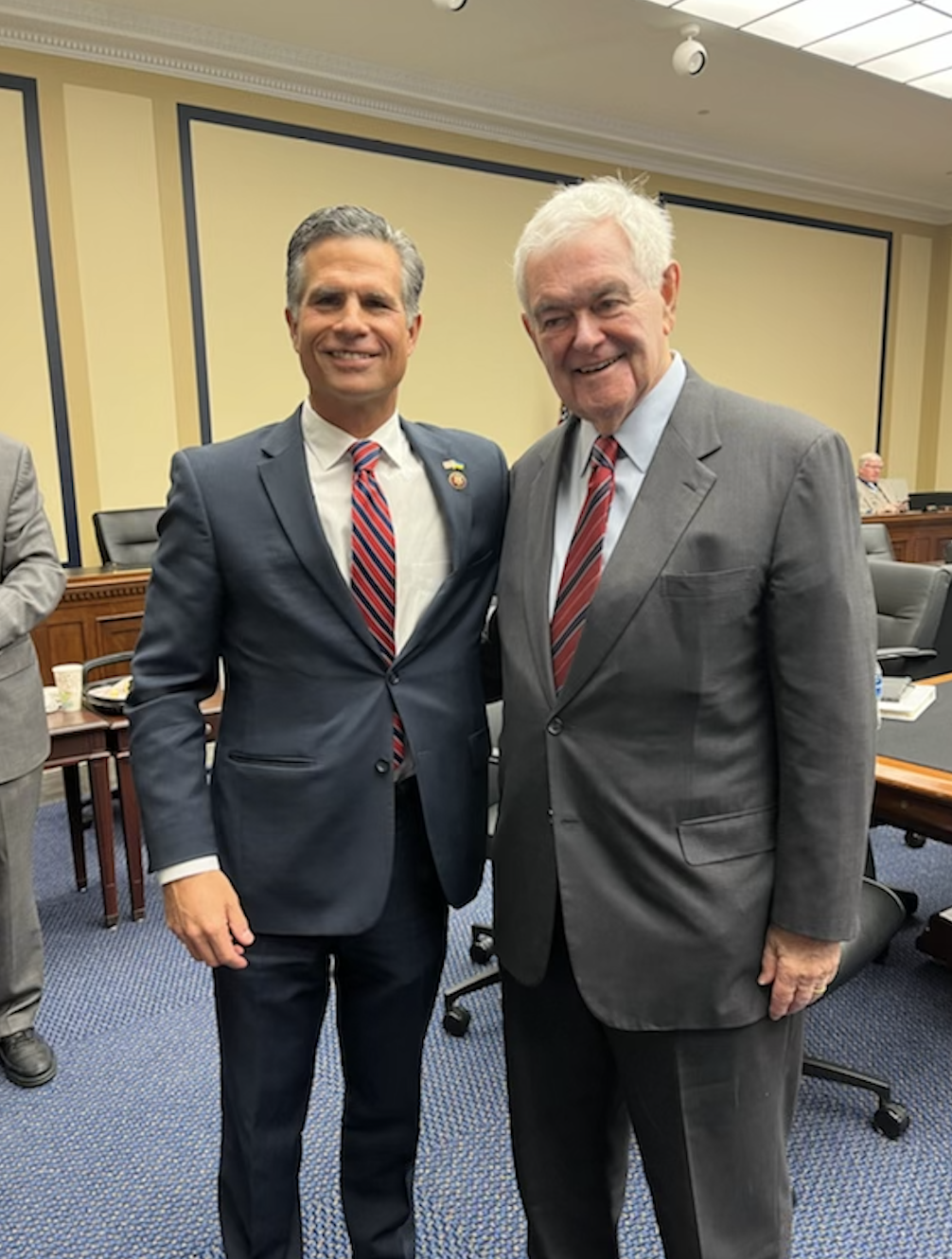 With Congressional Democrats meeting in Philadelphia recently, I joined Chris Stigall on the AM 990 to discuss the economy, Russia, energy independence and other topics. Click here to listen.

I want to thank our good friend Bill Leandri, a member of the Back Mountain Ecumenical Group, for inviting me to speak at their breakfast this morning. We discussed the Russian invasion of Ukraine, American energy, the atmosphere in D.C. and answered questions from the audience. 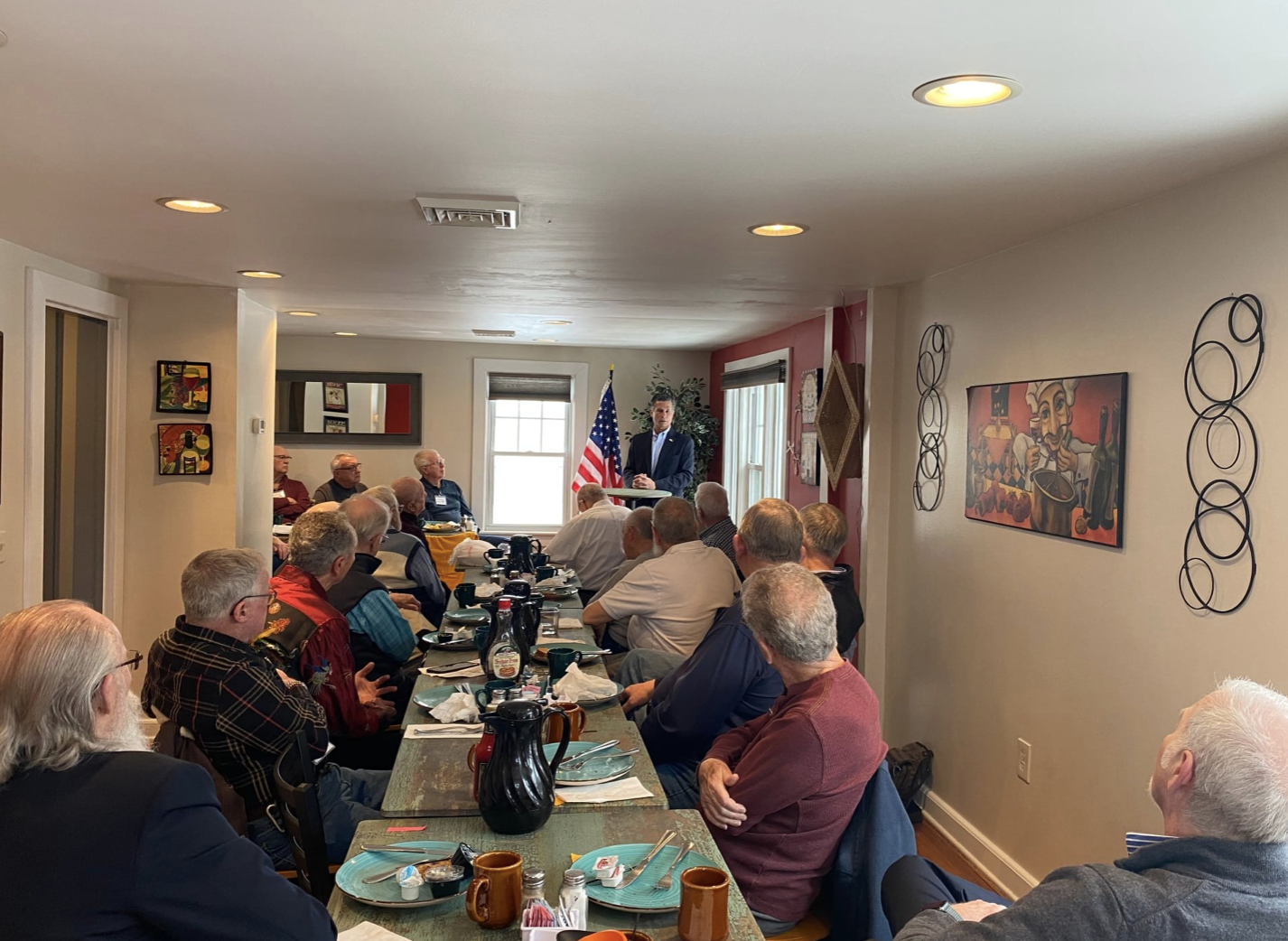 On Thursday, I joined Congressman Scott Perry and State Senator Chris Gebhard at Ft. Indiantown Gap for their ribbon-cutting ceremony of a new training facility. 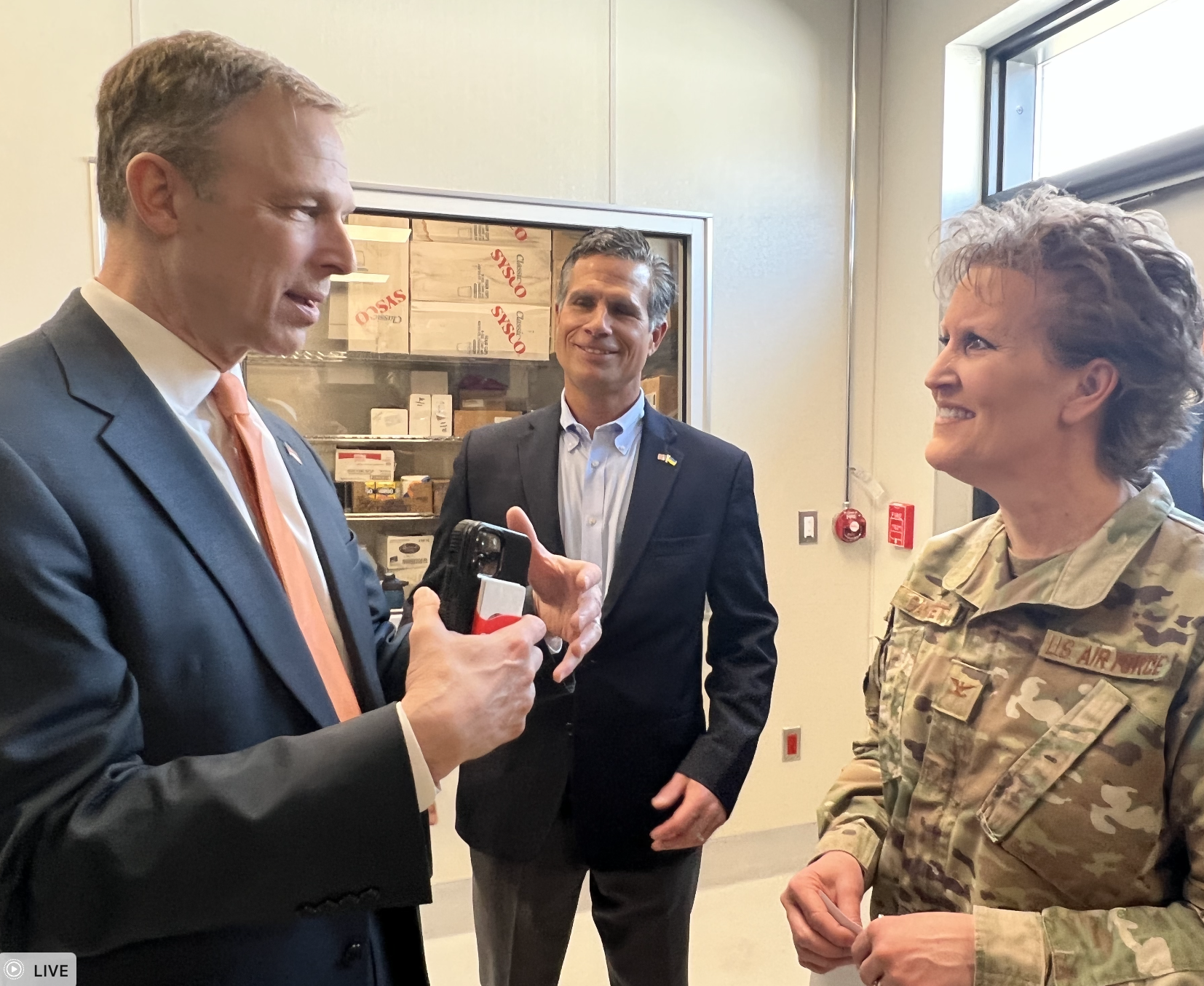 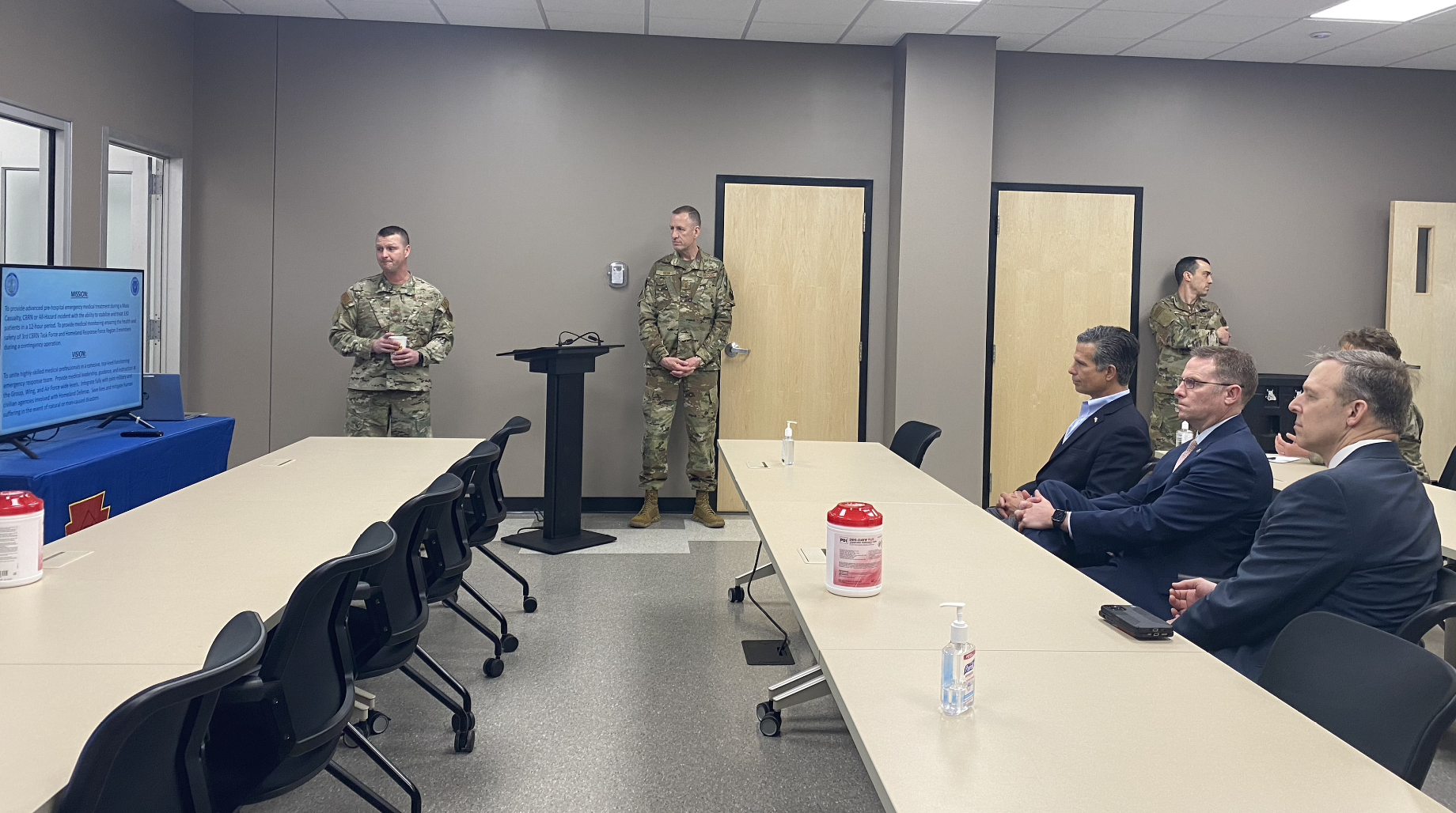 IN NEWS YOU WON'T HEAR IN THE MAINSTREAM MEDIA: While there is plenty of news regarding high gas prices, the media refuses to discuss the real reasons why prices are skyrocketing. The truth is that the Biden administration's assault on American energy has led to high gas prices, hurting American families. 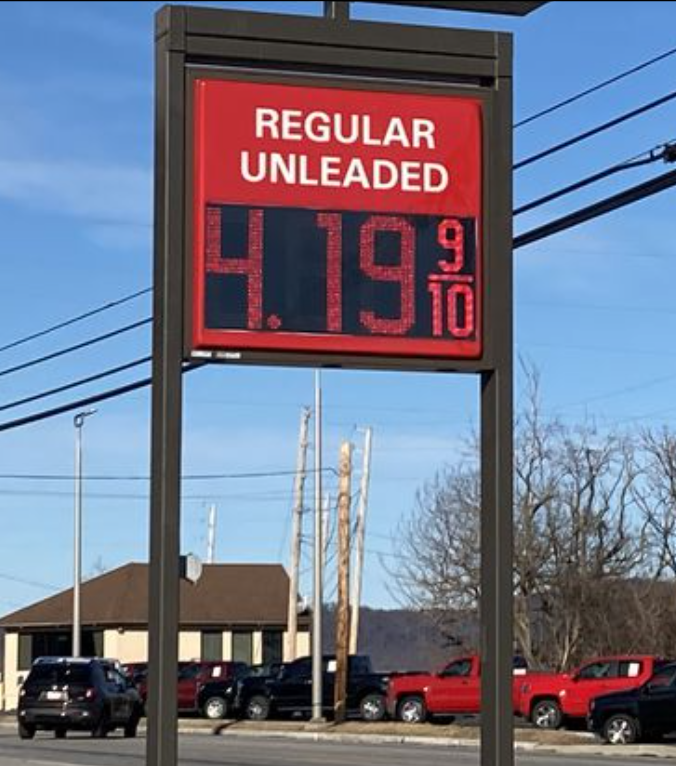 Meanwhile, the Biden administration has attempted to deflect blame and spin the American people: 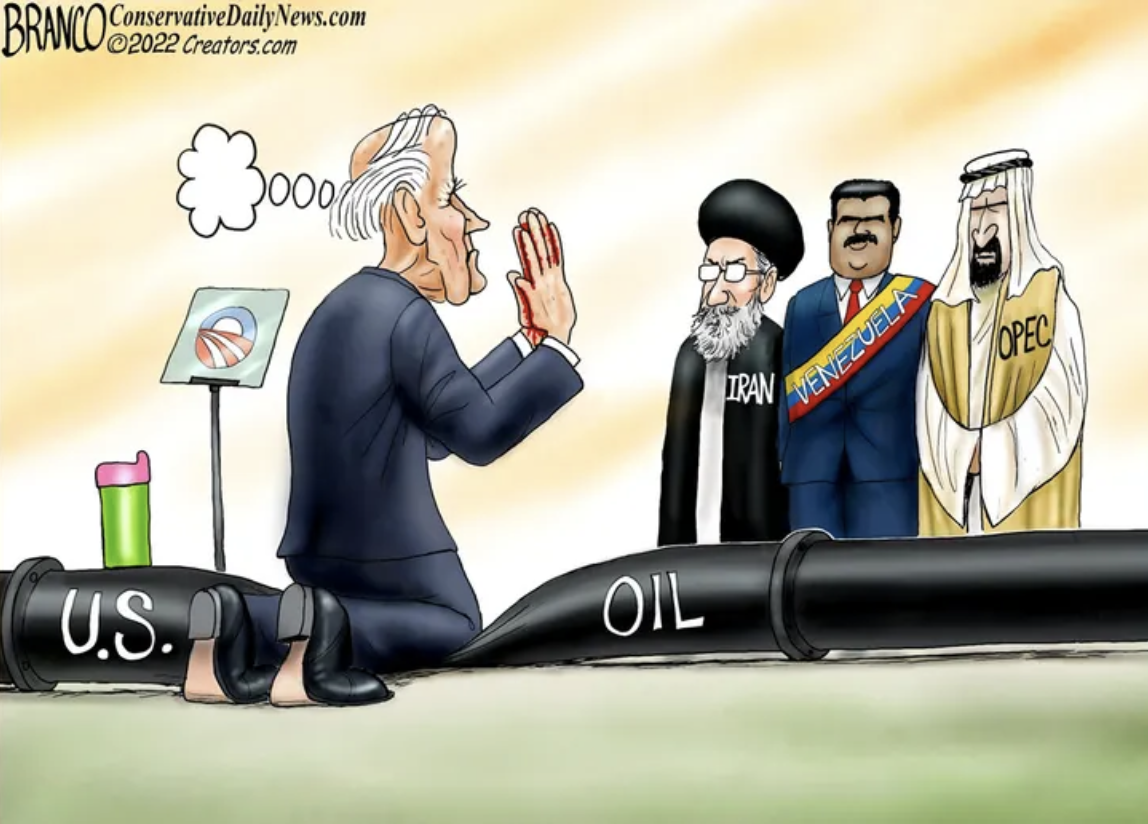 Biden has conducted a full-fledged assault on American energy production and jobs from the first day of his administration. He canceled the Keystone XL pipeline, reinstated crushing anti-energy policies from the Obama era, suspended oil and gas leases on federal lands, stopped oil and gas leases in ANWR, and stopped leases on federal lands and waters. Unfortunately, they want to go even further… they have proposed more regulations and increased taxes on American energy and even stated they are 'reviewing' a complete fracking ban. High gas prices are a direct result of Biden's assault on fossil fuels.

The election in November is critical. We must win back control of the U.S. House in November. Biden and far-left Democrats have driven our country into a ditch. We must do better. Americans are hurting, and they are fed up. In fact, a recent poll released by the Wall Street Journal shows that Hispanic voters prefer Republican congressional candidates over Democrat candidates by 9 points. Amongst black voters, Republican support rose by 27%. This is historic and shows just how unpopular the Biden administration has become. 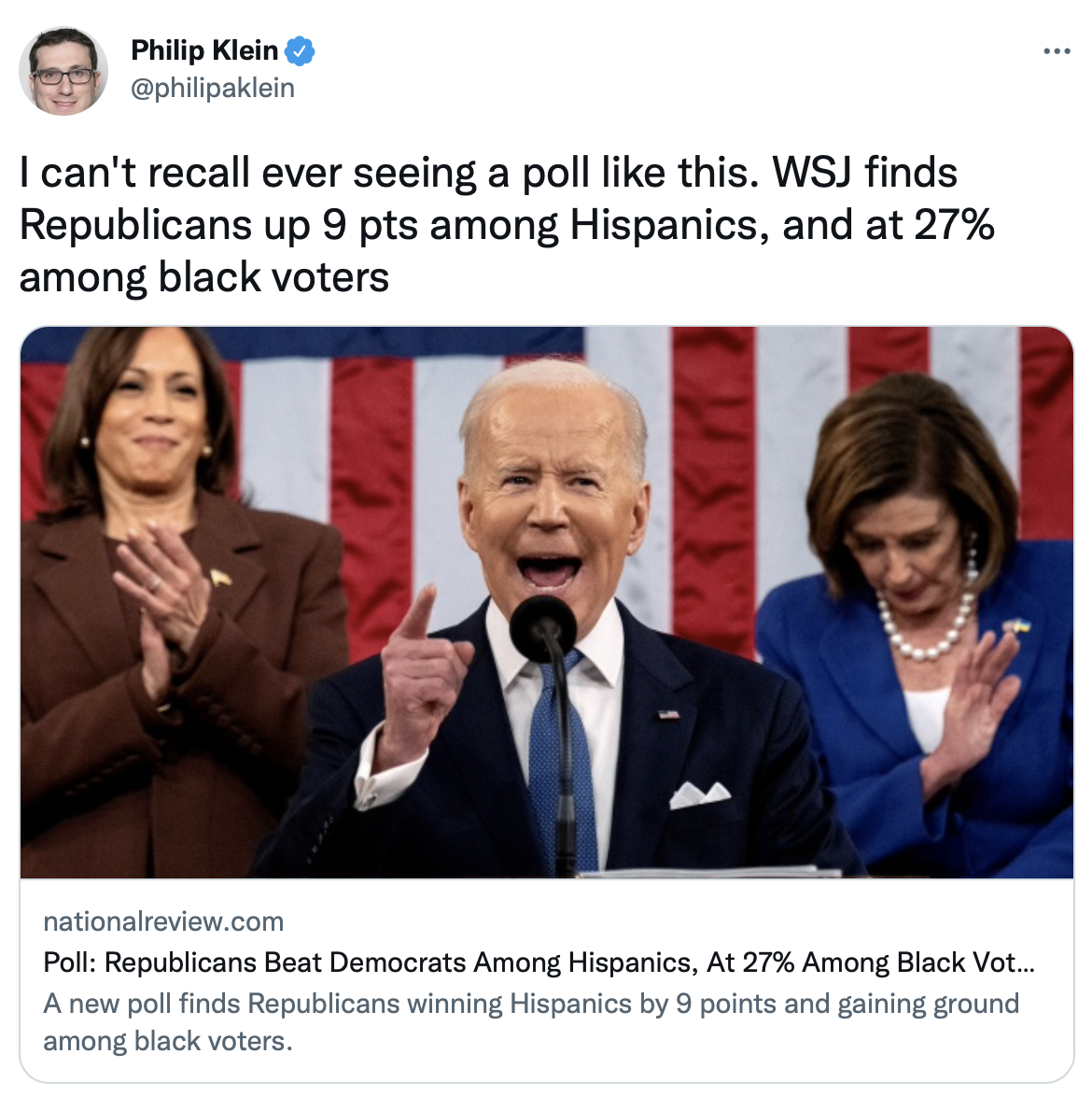 Our campaign is going well and we are prepared to file for the ballot. If you have any petitions you would have circulated, please contact our campaign by emailing [email protected] or calling 570-915-3027. We will be glad to pick them up.

We have been working hard on the campaign trail and enjoying every minute of it.

Earlier this week, we joined our friends in Lebanon County for a petition signing event in Annville. (Shelley and I pictured below with Lebanon County Recorder of Deeds Dawn Blauch, South Londonderry Twp Supervisor Faith Bucks, Steve Wolfe, and our friends State Reps. Russ Diamond and Frank Ryan) 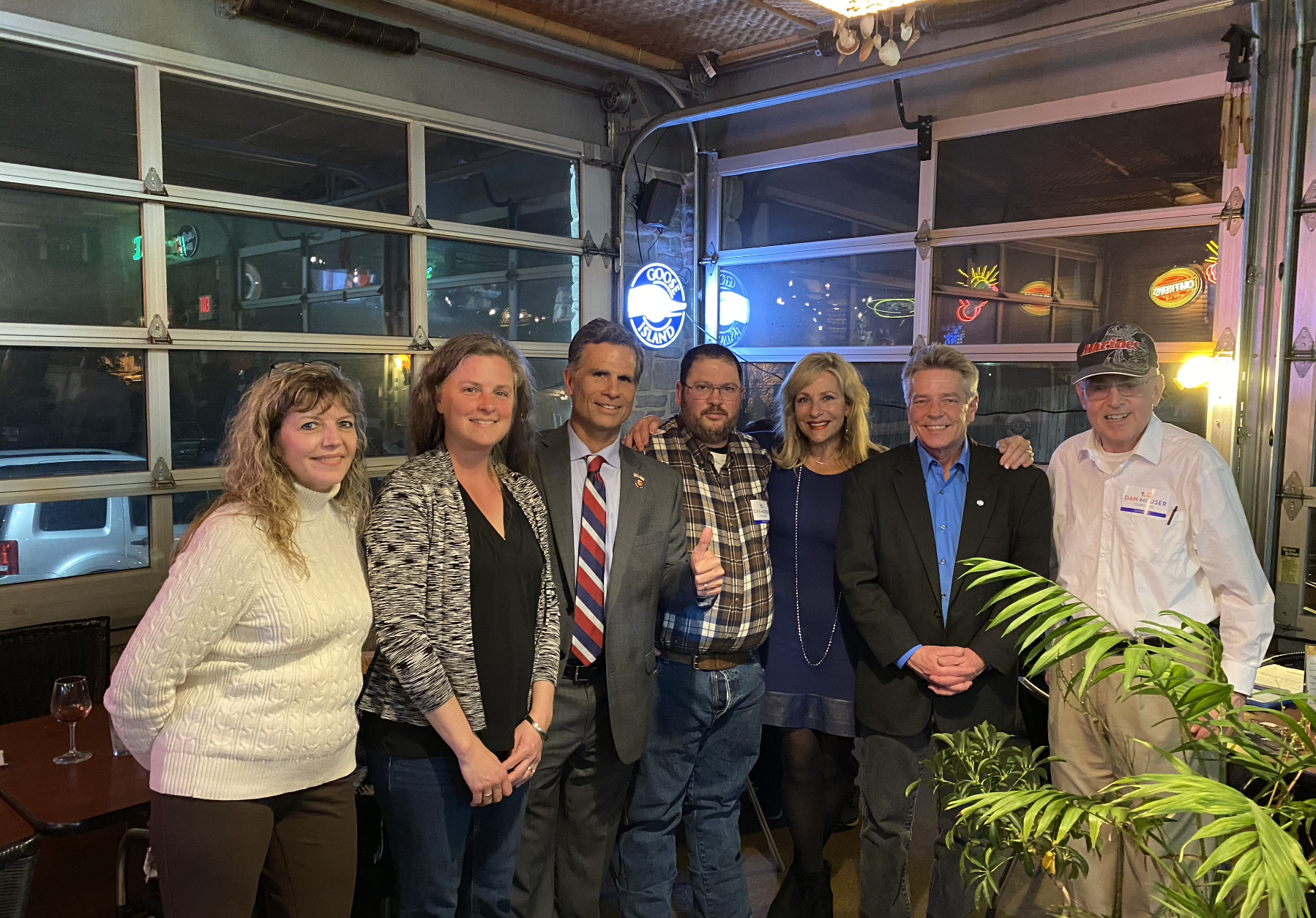 We joined the Northumberland County GOP at their endorsement meeting. We were pleased to receive the endorsement of their grassroots Republican leaders. 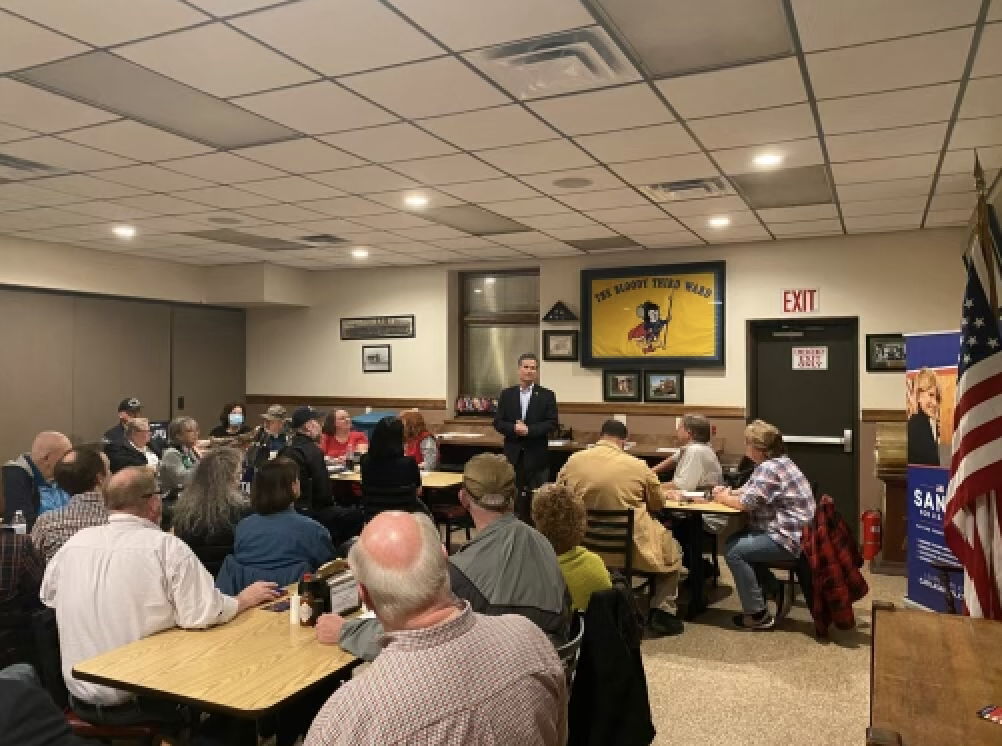 We appeared at Carmelo's Roman Delight in Orwigsburg for a petition signing event on Friday. Great to be joined by our friend Schuylkill County Commissioner Boots Hetherington. 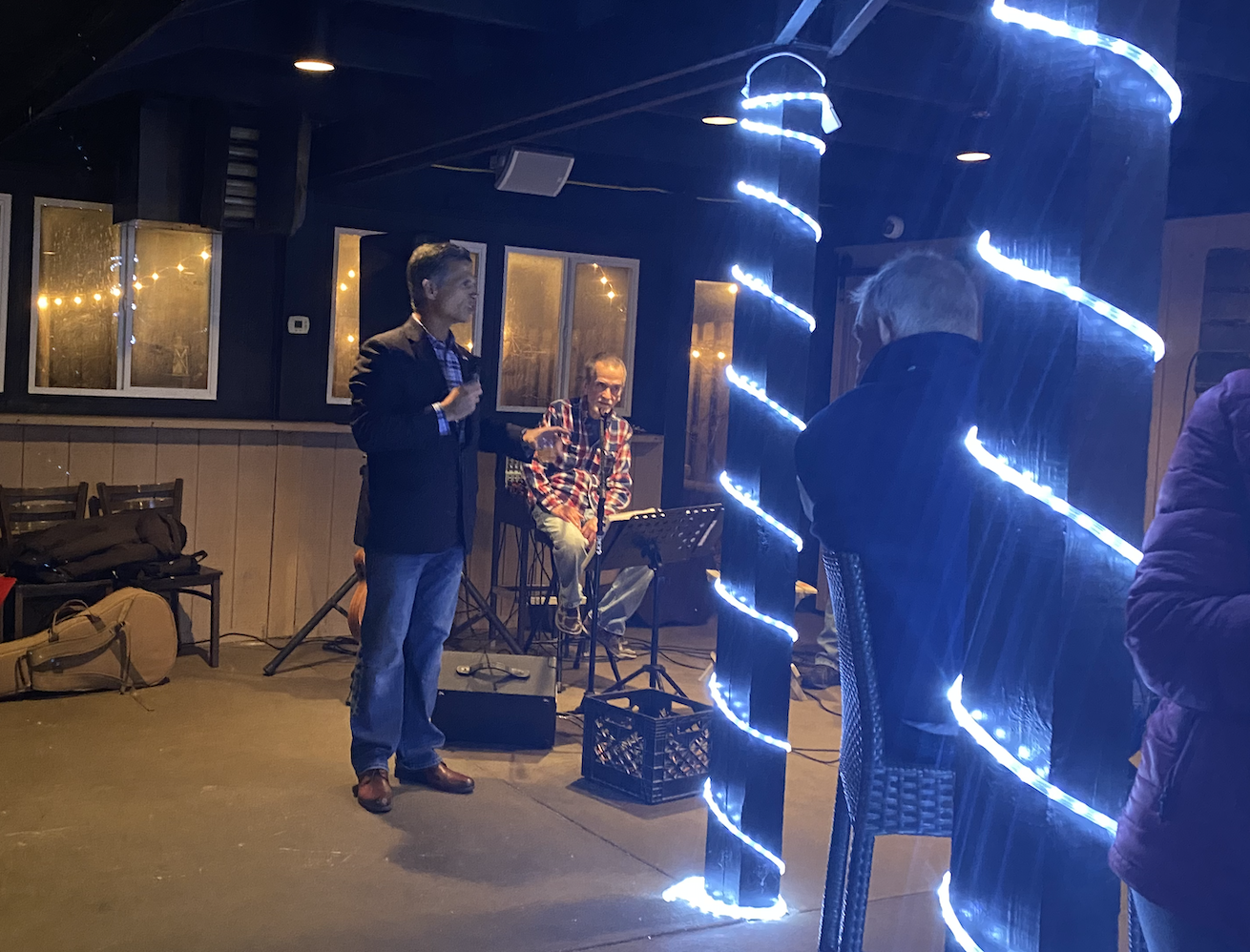 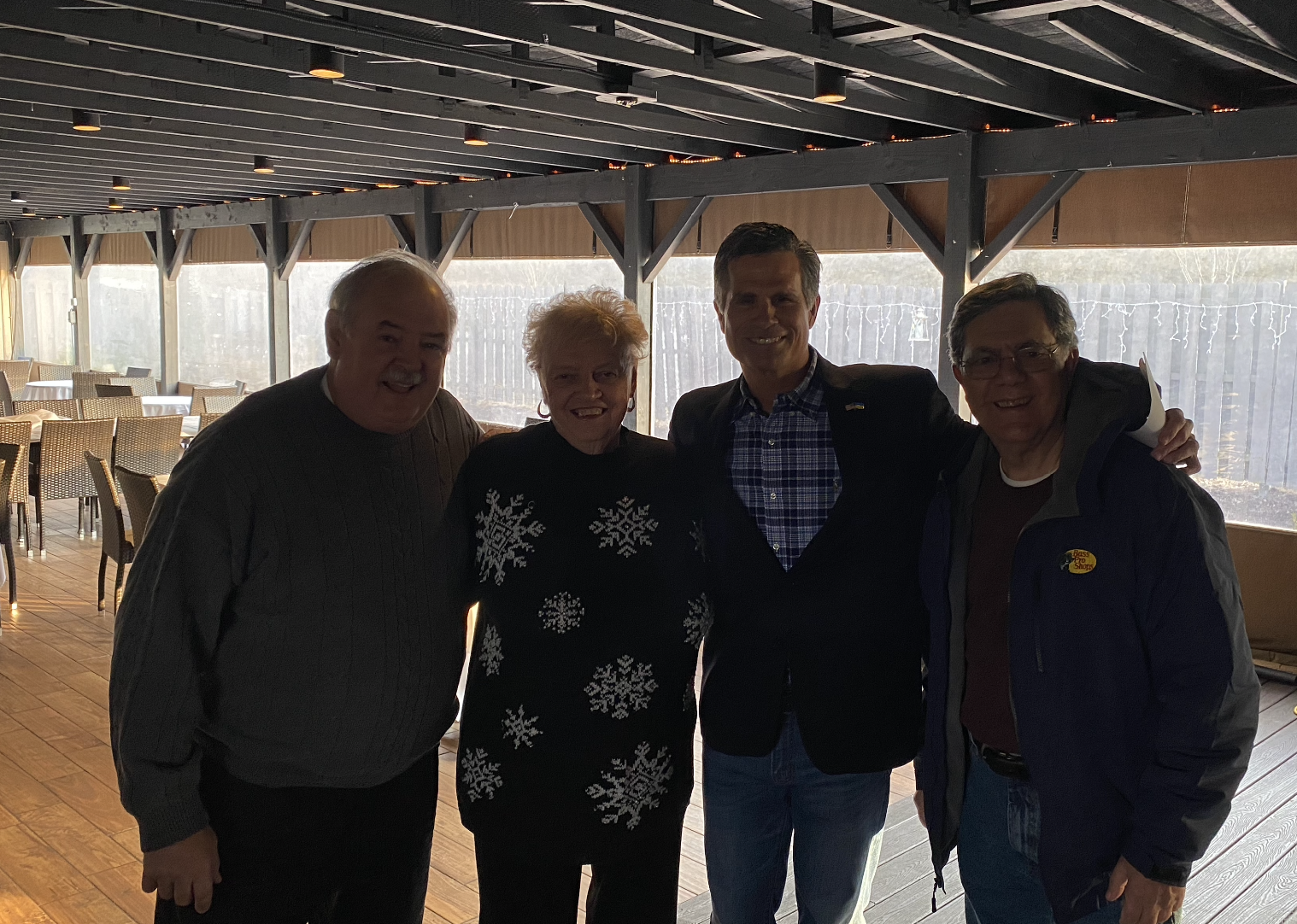 Thank you, and please stay safe. As we Spring forward, we all can look forward to warmer weather and longer days.