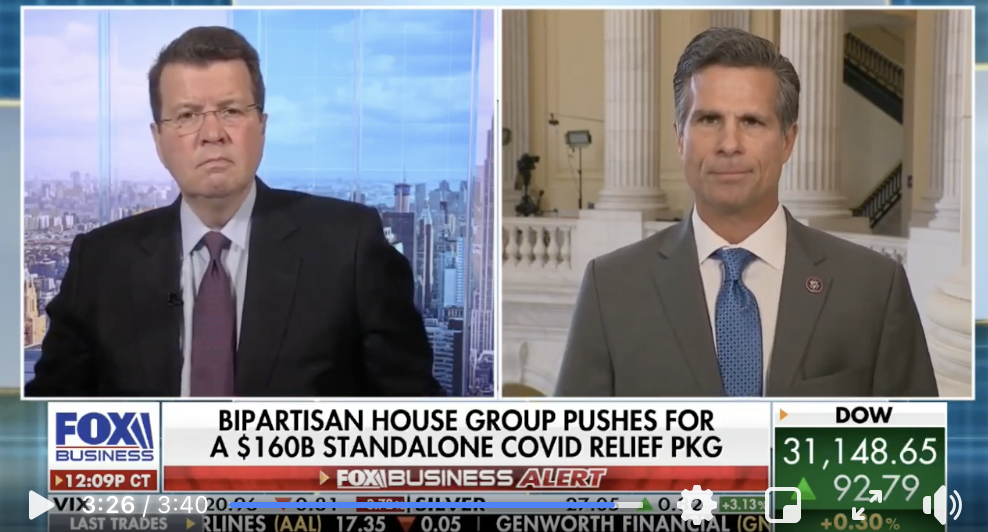 This week, I participated in my first hearing as a member of the House Small Business Committee. I also was named as the Republican Leader of the Subcommittee on Economic Growth, Tax and Capital Access, where I look forward to fighting for small businesses across the country, many of which have suffered from unfair treatment over the past year due to arbitrary lockdowns.

To help further revitalize an economy harmed by the COVID-19 pandemic, I am committed to removing unnecessary regulations, improving access to capital and working with the Small Business Administration to make the Paycheck Protection Program as available and workable for those businesses that need it to survive.

Governor Wolf's proposal to dramatically increase the state's personal income tax by 46% would be a bad idea under normal conditions. Unfortunately, many Pennsylvania families and businesses are currently struggling financially due to the Covid-19 pandemic and the related restrictions. Imposing the largest tax increase in Pennsylvania history at a time like this is simply unconscionable.

Pennsylvania must always strive to become a leading state to do business, drive private sector growth and create an environment to improve our quality of life. By doing such, state revenues increase, which will mean more funding for schools, public safety, and infrastructure. That is a pro-growth plan. We must emulate the pro-growth, business-friendly environments of leading states, like Texas and Florida.

We need leadership that appreciates the need to make us more competitive, will work to rein in state agencies and eliminate harmful business regulations. Pennsylvania can be the next Texas, but we need new leadership and the right plan to get us there.

This week, Secretary of Commonwealth Kathy Boockvar resigned following her Department's failure to advertise a proposed Constitutional amendment properly. This amendment would allow now-adult victims of childhood sexual abuse a two-year exception from a time limit in state law that otherwise bars them from suing perpetrators or institutions that may have covered up abuse.

Pennsylvania law requires that proposed amendments to the state Constitution be printed in two newspapers in each county in each of the three months before an election when members of the General Assembly are elected.

This was an egregious mistake that may now require the legislature to pass this measure again in the next two legislative sessions, pushing this ballot initiative off till 2023 at the earliest. It also raises questions about how that Department, also in charge of our elections, has been operating under her leadership.

This mistake raises issues. This advertisement should have run in newspapers well before the election, in late August or early September. Who knew what when? Why are we only learning about it now? We do plan to ask questions and get answers as to why this is divulged now, when clearly they knew this was a big mistake in September.

Where is our Attorney General?:

This issue also raised an important matter the mainstream media is not covering… where is and was our Attorney General Josh Shapiro? This is an issue Shapiro has focused his first term in office on, and his office is responsible for reviewing the language of Constitutional amendments. What did he know and when? What was his office's responsibility in this procedural failure? As this issue was so critical to him, why did he not follow it more closely?

This is not the only time our Attorney General has been missing in action. Why has he not reviewed the issues surrounding the Governor Administration's handling of the Covid-19 pandemic... particularly related to instructions the Commonwealth made telling nursing homes to admit Covid-19 infected patients?

In New York, Democrat Attorney General Letitia James found that Democrat Governor Andrew Cuomo's administration dramatically undercounted Covid-related deaths of state nursing home residents by the thousands. Why hasn’t our Attorney General conducted a similar review? After all, according to reports, Pennsylvania and New York both delivered the same misguided advice to nursing homes during the pandemic.

I plan to ask the Attorney General's office for information or a similar report.

The United States Supreme Court has agreed to review the constitutional arguments raised during the last election to determine if state officials overstepped their authority, particularly related to the application of Article II, Section 1, Clause 2 and Article 1 and Section 4, Clause 1 of the U.S. Constitution. These sections of the U.S. Constitution affirm undisputedly that state legislators have the authority to set the time, place and manner of elections. I am anticipating an affirmation of what is unambiguous in the U.S. Constitution... that the time, place and manner of elections are strictly under the authority of the state legislatures, not a Governor or appointed Secretary of State. The case is scheduled to be heard on February 19.