Good afternoon and welcome to our Week-End Update!

What another GREAT week as the America First Agenda continues to make our nation stronger.

First, another outstanding jobs report for December – our economy continues to surge under the policies of President Donald Trump and Congressional Republicans. The U.S. economy added 145,000 jobs this past month, and in 2019 overall, employers added 2.11 million jobs. Since the President took office, over 7.3 million jobs have been created. The chart below showcases how the Trump administration has drastically outperformed the Obama administration in growing the earnings of workers. This chart clearly shows how President Trump is helping hardworking Americans and their families. Fortunately, this growth is a blue-collar job boom. 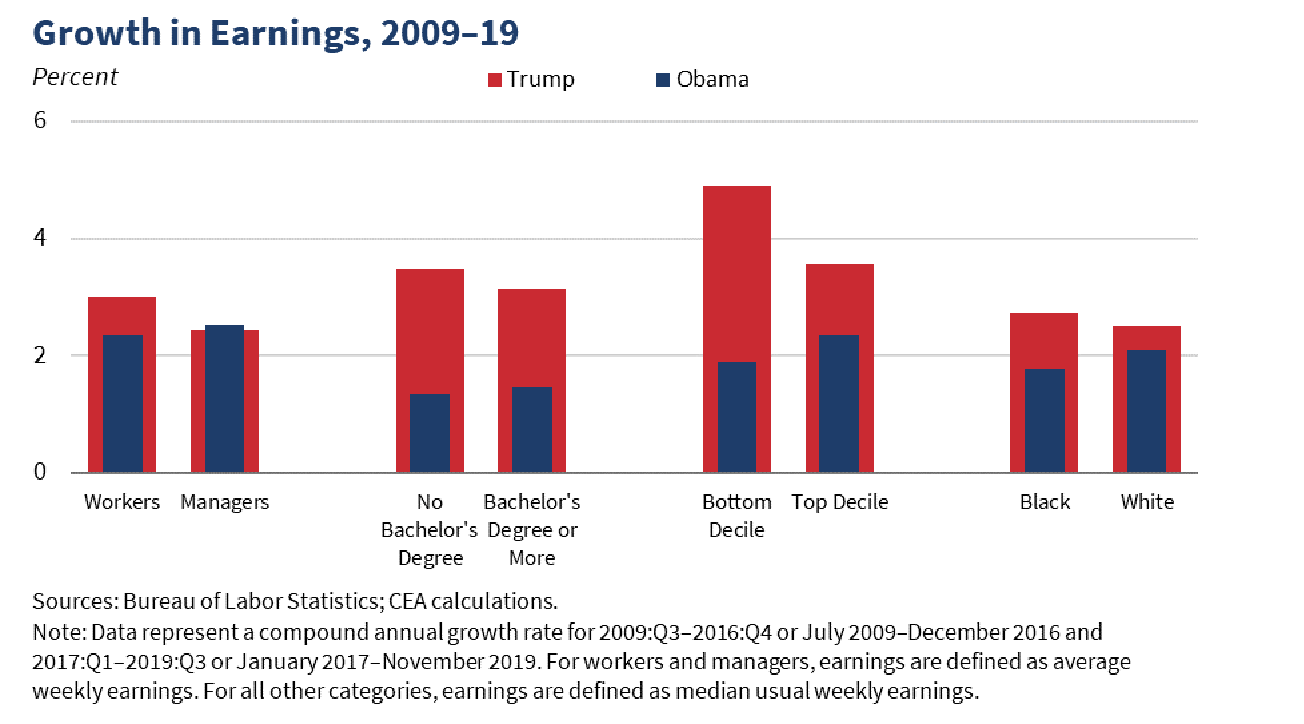 Next, the U.S. Senate passed the U.S.M.C.A.  and it is now on President Trump’s desk. This is a landmark trade agreement, fully led by the President, that passed with bipartisan support. We will finally have a trade deal in place that puts American working families first.

Finally, President Trump and his administration negotiated a deal with China that creates fairer trade and more open markets for U.S. manufacturers and farmers. The Phase 1 deal is a major step in the right direction for long-term growth & prosperity. It will slash our trade deficit with China by $200 billion, protects US intellectual property, and positive results are already here: a booming stock market and doubling of soybean exports.

The China deal is good for our country and great for working families. America will continue to prosper, meaning higher wages and create even more good-paying jobs for all Americans. President Trump is making trade work for America. 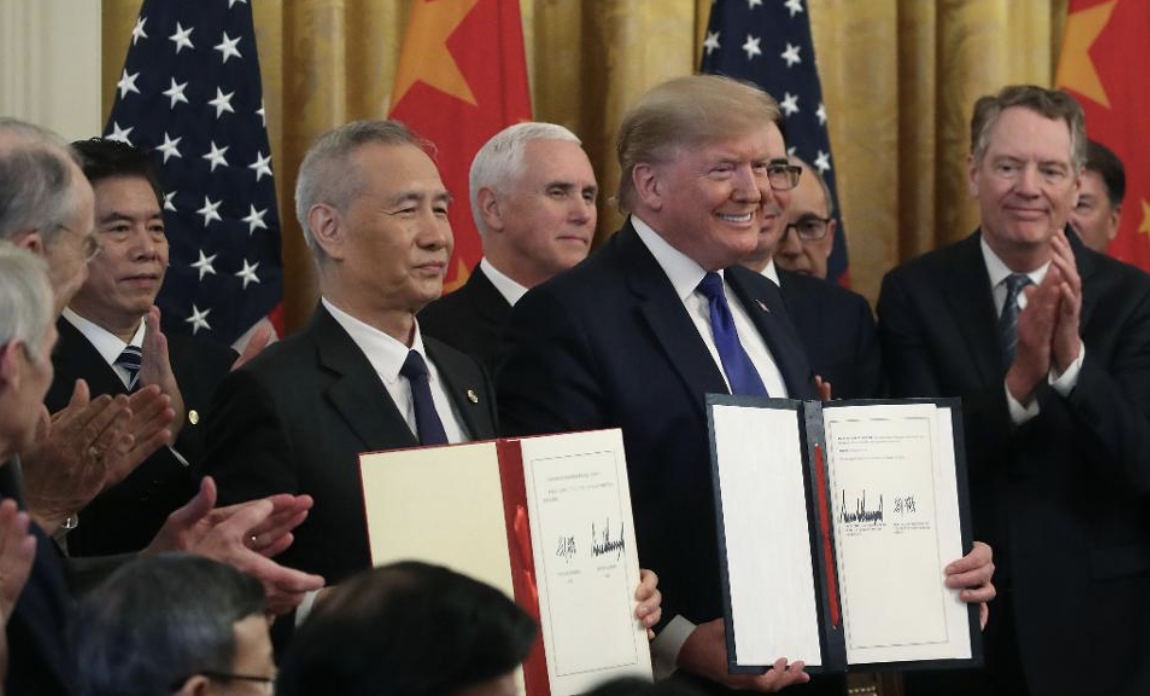 These landmark deals have opened up new markets for U.S. goods.

As we celebrate the success of America’s prosperous economy, it is timely that the Department of Labor Secretary Eugene Scalia joined us in Northeastern Pennsylvania for a tour of Pulverman Manufacturing, a metal fabrication plant based in Dallas Township, on Tuesday morning. Later, Scalia hosted a roundtable with the Northeastern Pennsylvania Alliance to discuss the most significant issues facing job creators and the region. We discussed the pro-growth economic policies that are leading to a robust economy for American workers. Thanks to competitive tax rates, reductions in regulation, significantly improved trade deals, and energy independence, our national and state economies are doing well.

There is much to be done, and our conversations focused in the areas of workforce development, continued regulatory reform, revitalization efforts, and the opioid epidemic.

By the government creating an atmosphere of growth, the private sector can maximize wages, employment, and opportunity for the people of PA. Following the conversations with local business and elected leaders, I feel we laid out a game plan to do just that. Click here to read more about the Secretary’s visit. Pictured below are Secretary Scalise with the Pulverman owner Randy Mark and employees Beth Harris. Also pictured below with Secretary Scalise, State Senators John Gordner and Lisa Baker and State Representatives Tarah Toohil and Aaron Kaufer. 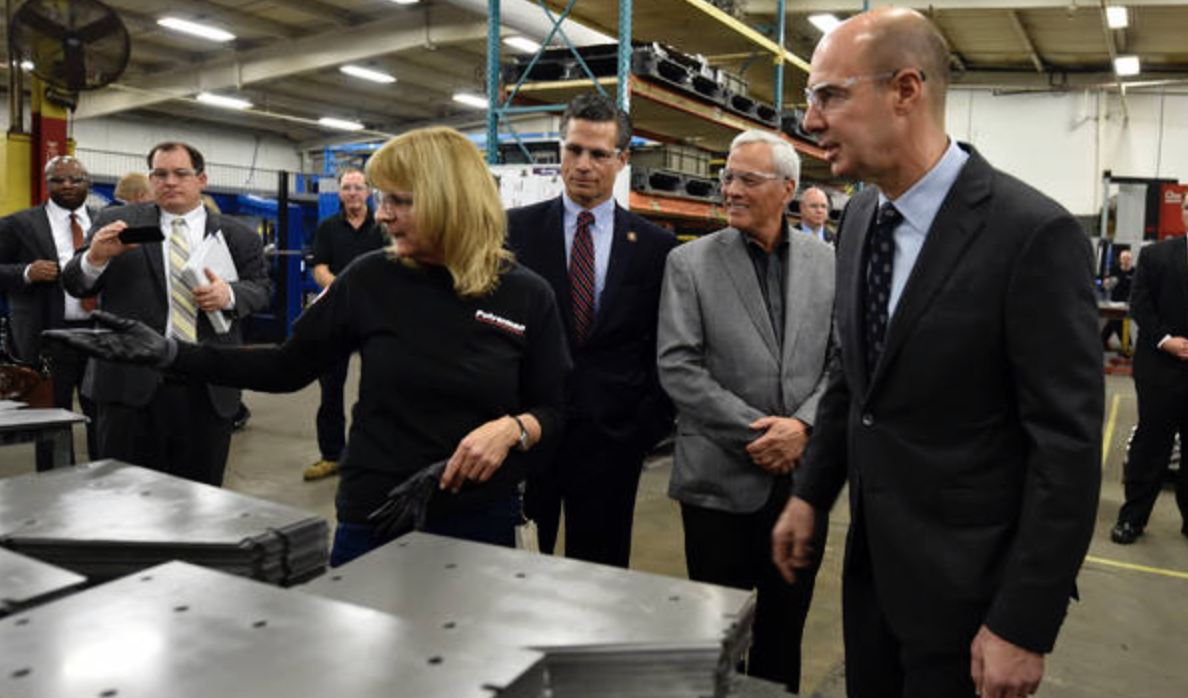 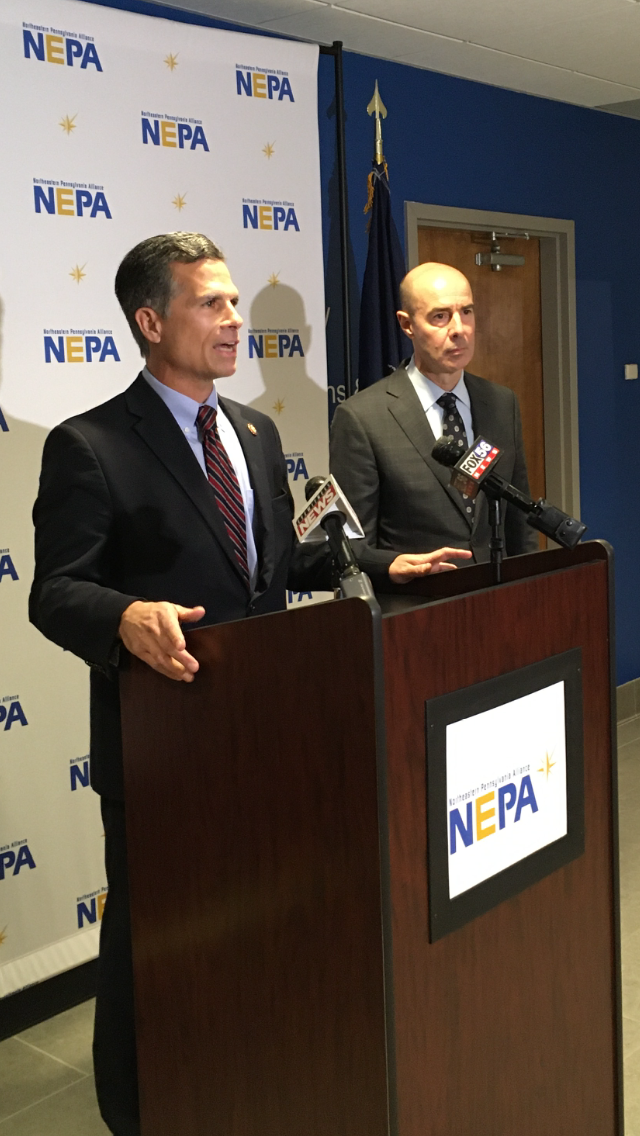 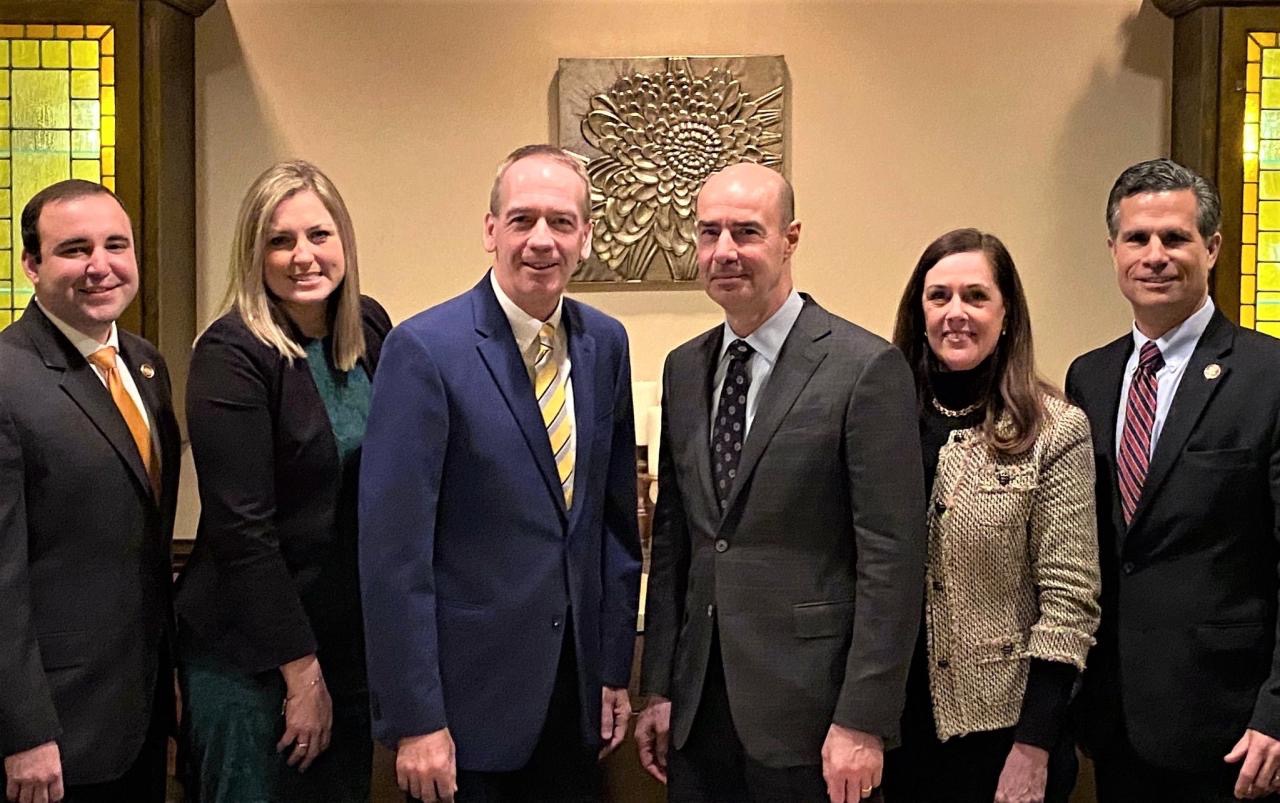 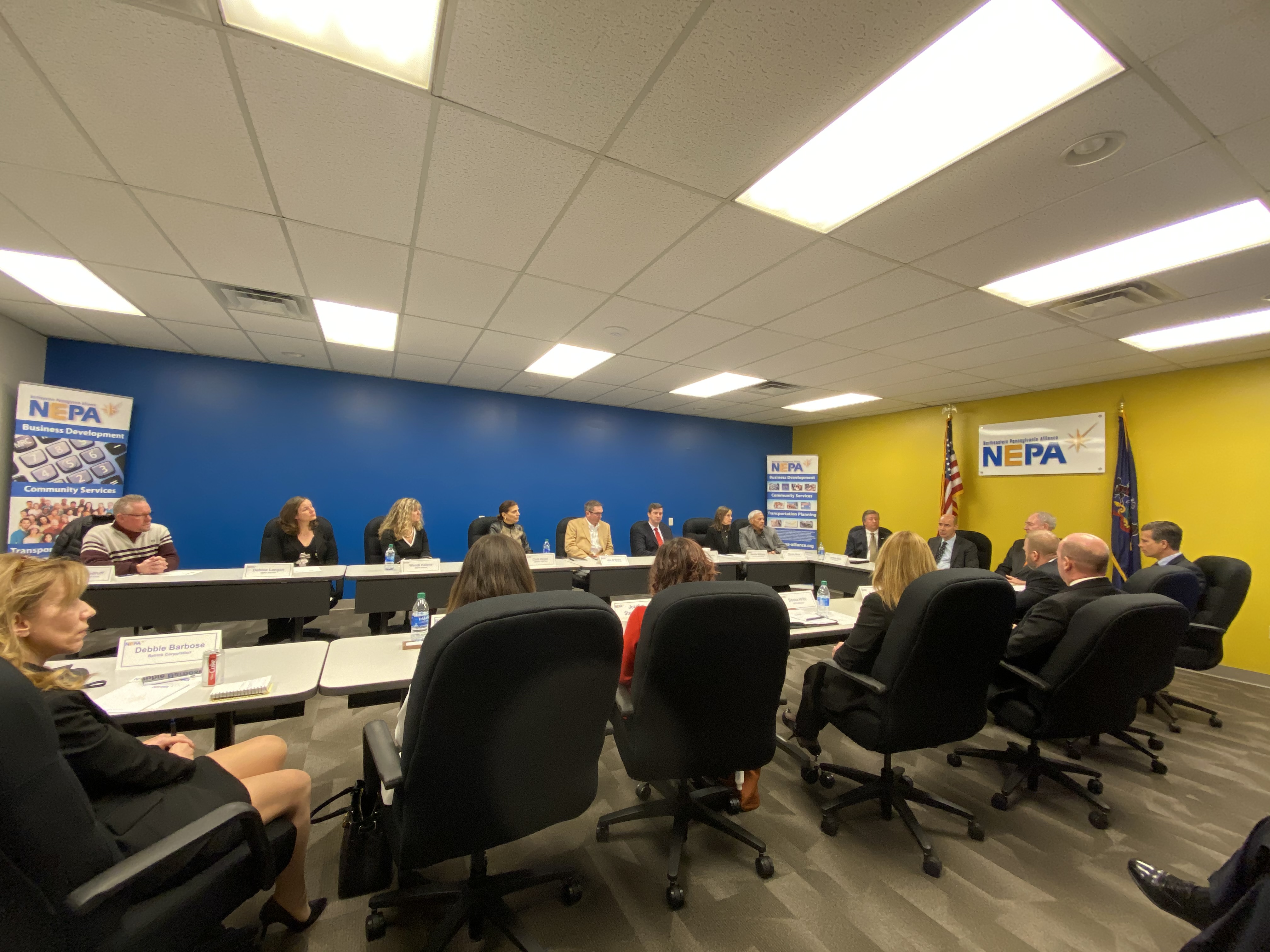 Yesterday, I visited APR Supply, a wholesale distributor of plumbing, automotive and HVAC products based in Lebanon County. Great visit and another impressive company in PA#9. Pictured below with President & CEO Scott Weaver.

This week, I spoke on the floor of the House to discuss my priorities for 2020. I am committed to delivering real results for our country. We must reduce the cost of healthcare, end surprise billing, decrease the cost of prescription drugs, end prohibitions on association health plans and ensure there is no loss of coverage for those with preexisting conditions. We must support our veterans and ensure they receive the care they deserve and have earned and keep our military strong and prepared. We must fix our broken immigration system by securing our borders, make the Trump tax cuts permanent, rebuild our aging infrastructure, revitalize our small cities and be fiscally responsible. Finally, Congress must stop confusing activity with accomplishment.

In News You Won’t Read In The Mainstream Media: For months, Speaker Nancy Pelosi and Chairmen Adam Schiff and Jerry Nadler have been claiming that the impeachment of President Trump is an 'urgent matter' requiring immediate action by Congress, but the American people know that this couldn’t be further from the truth.

I appeared on the Fox Business Network to discuss the latest on the ongoing impeachment proceedings. Click here or on the image below to watch. 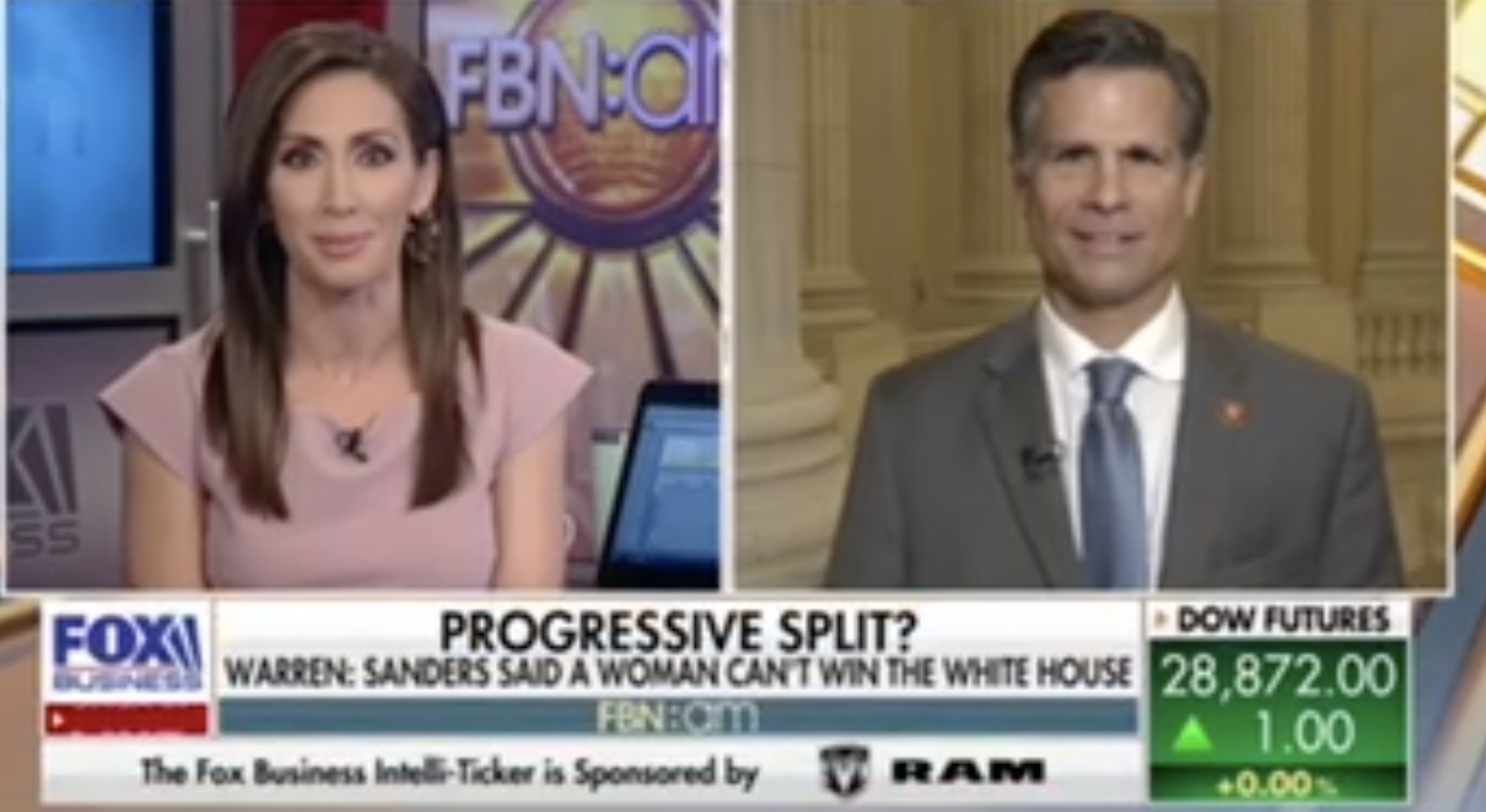 Did you watch the Democratic Presidential Debate? I hope not for your sake. But let me recap it very quickly… Pete Buttigieg, the 37-year-old mayor of South Bend, 4/5 the size of Allentown, lacks the experience necessary to lead our nation. Elizabeth Warren promises to ban fracking which will eliminate over 500,000 jobs in Pennsylvania. Bernie Sanders is the self-proclaimed socialist. Joe Biden is desperately saying anything attempting to prove his far-left bona fides.  If you listen to any of their extreme-left socialist ideas, how could anyone want any of them to be President? These debates are a great showcase to highlight just how important it is we reelect President Trump.

This week, I attended an event featuring former New Orleans Saints safety Steve Gleason and ALS advocate. This week, he was honored with the Congressional Gold Medal. Gleason will tell you that he has battled this disease and he is winning. He is a testament to not giving up, no matter what life throws your way - fantastic person and advocate for those suffering from ALS. 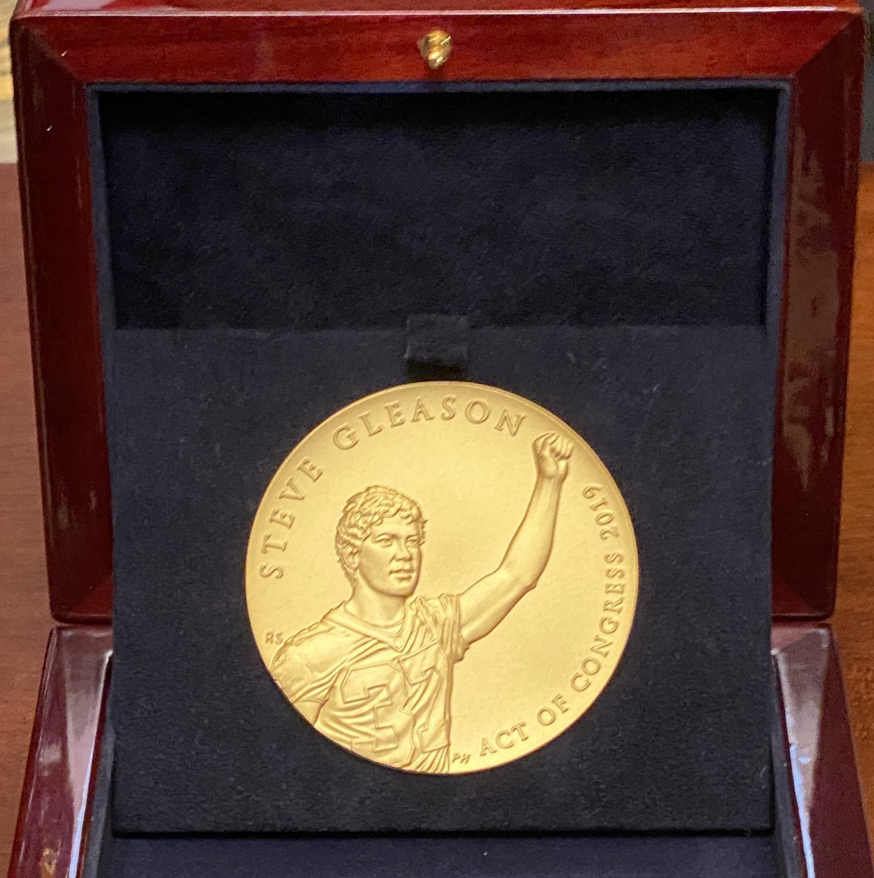 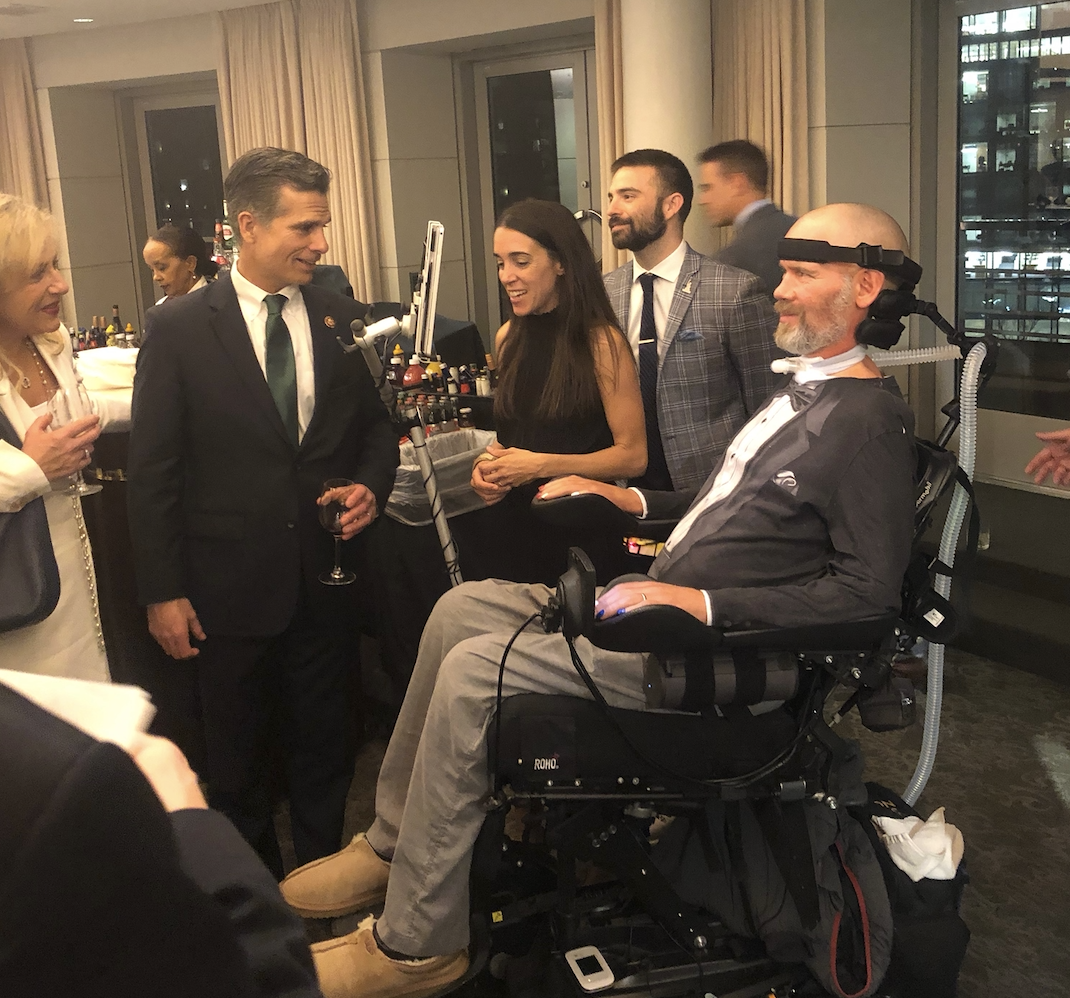 On Friday night, we attended the Reading Royals Hockey game with the Adirondack Thunder. I was happy to have been invited to drop the puck with a member of SOS Berks for Opioid Awareness Night. This is such an important issue that affects so many families and I applaud the work of SOS Berks and so many others like them. I want to thank the Reading Royals and General Manager David Farrar as well as SOS Berks for inviting us to attend. Pictured below with a representative of Berks SOS and their mascot Slapshot. For those keeping score at home, Reading defeated Adirondack by a score of 4 to 2. 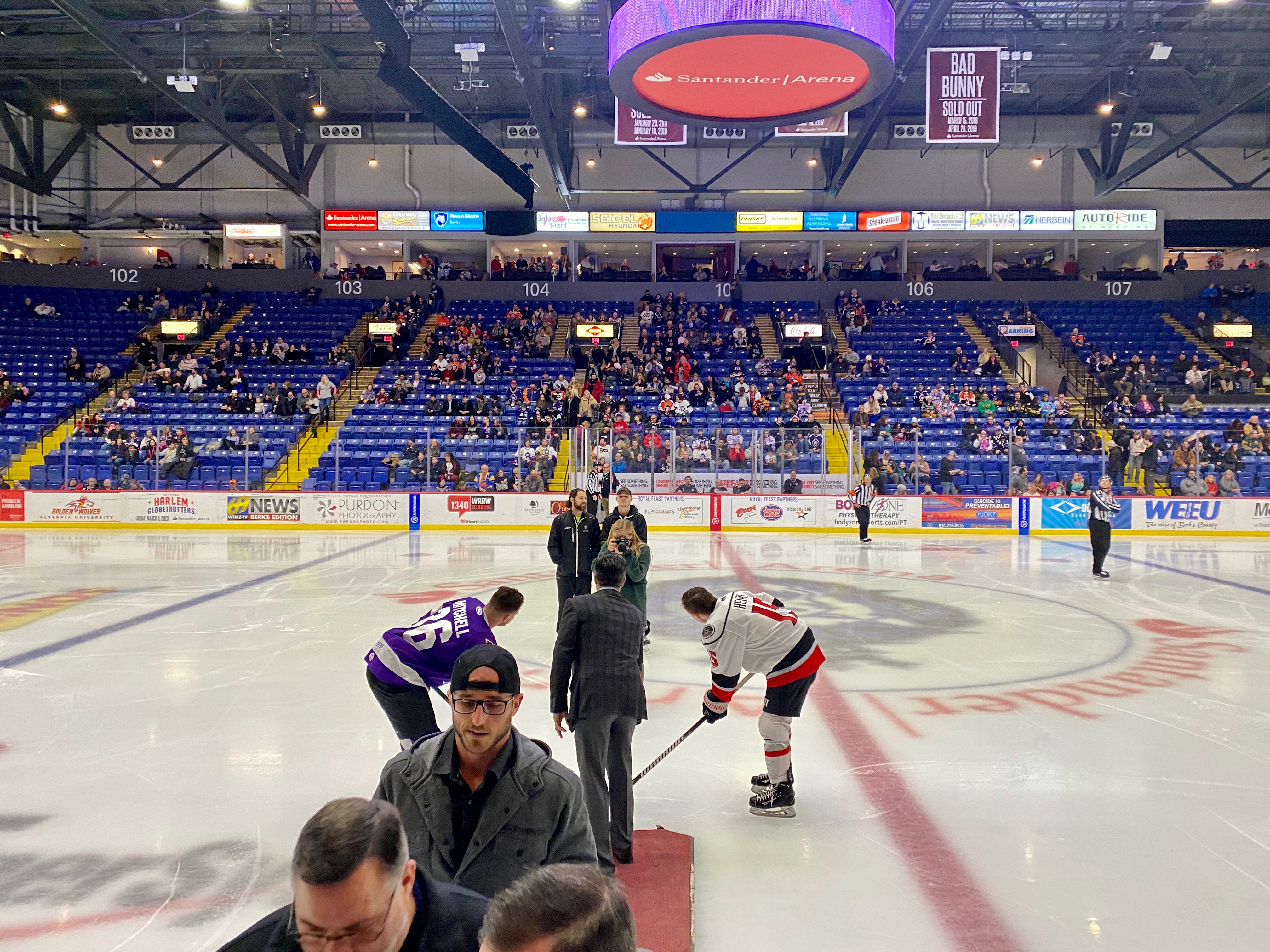 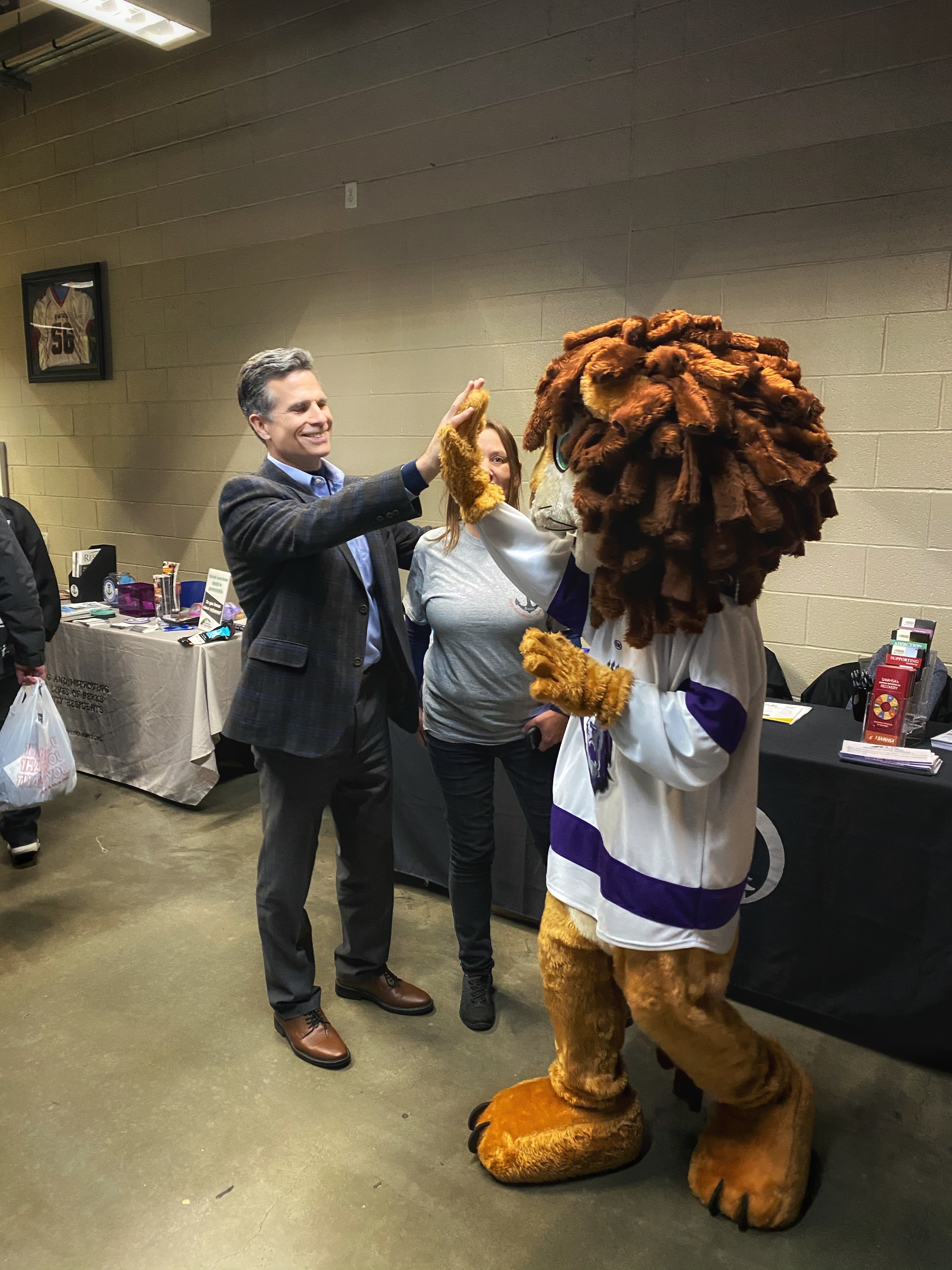 This morning, I attended the PA GOP's Northeast Caucus meeting. I discussed the importance of reelecting President Trump and having the Republicans win back control of the U.S. House. Great seeing so many close friends and I want to thank Northeast Caucus Chair and close friend Lance Stange for inviting me to say a few words. 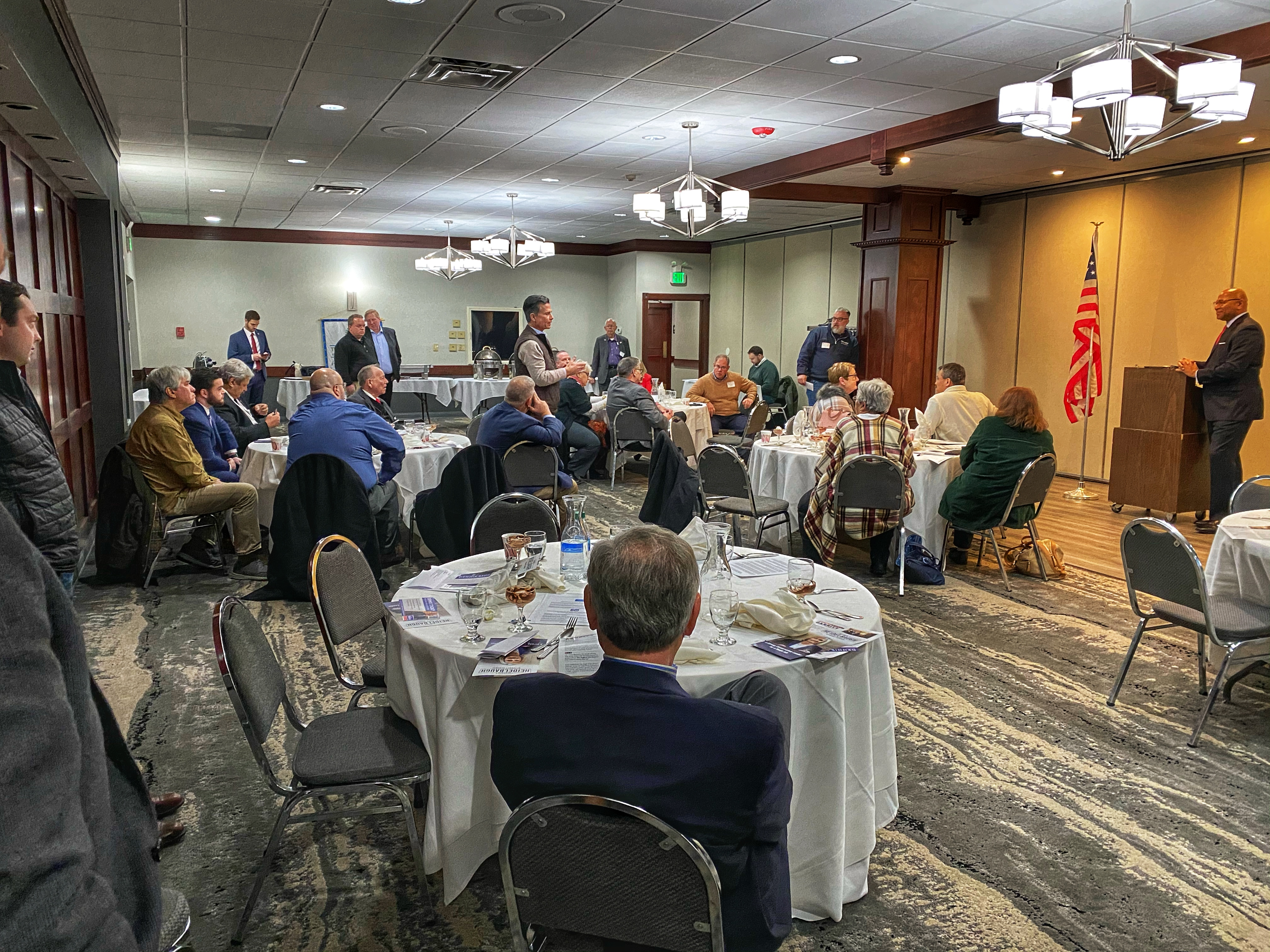 Lastly, as this is an election year, I will be circulating petitions to run for reelection to Congress. Petition circulation begins on January 28th. If you would like to join our team, please let us know. For copies of petitions, questions or information regarding petition events across the District, please contact our Field Campaign Manager Rob Bresnahan at rob@meuserforcongress.com.