This was a very important and busy week in both Pennsylvania and Washington. I can’t begin our weekly update without addressing how great it was to welcome President Donald Trump and Vice President Mike Pence to Hershey on Tuesday. This event was just a few miles away from the District and many from the 9th were in attendance. I was able to address the crowd and I can tell you that Pennsylvania is ready to re-elect President Trump. Click here or on the picture below to watch my remarks. 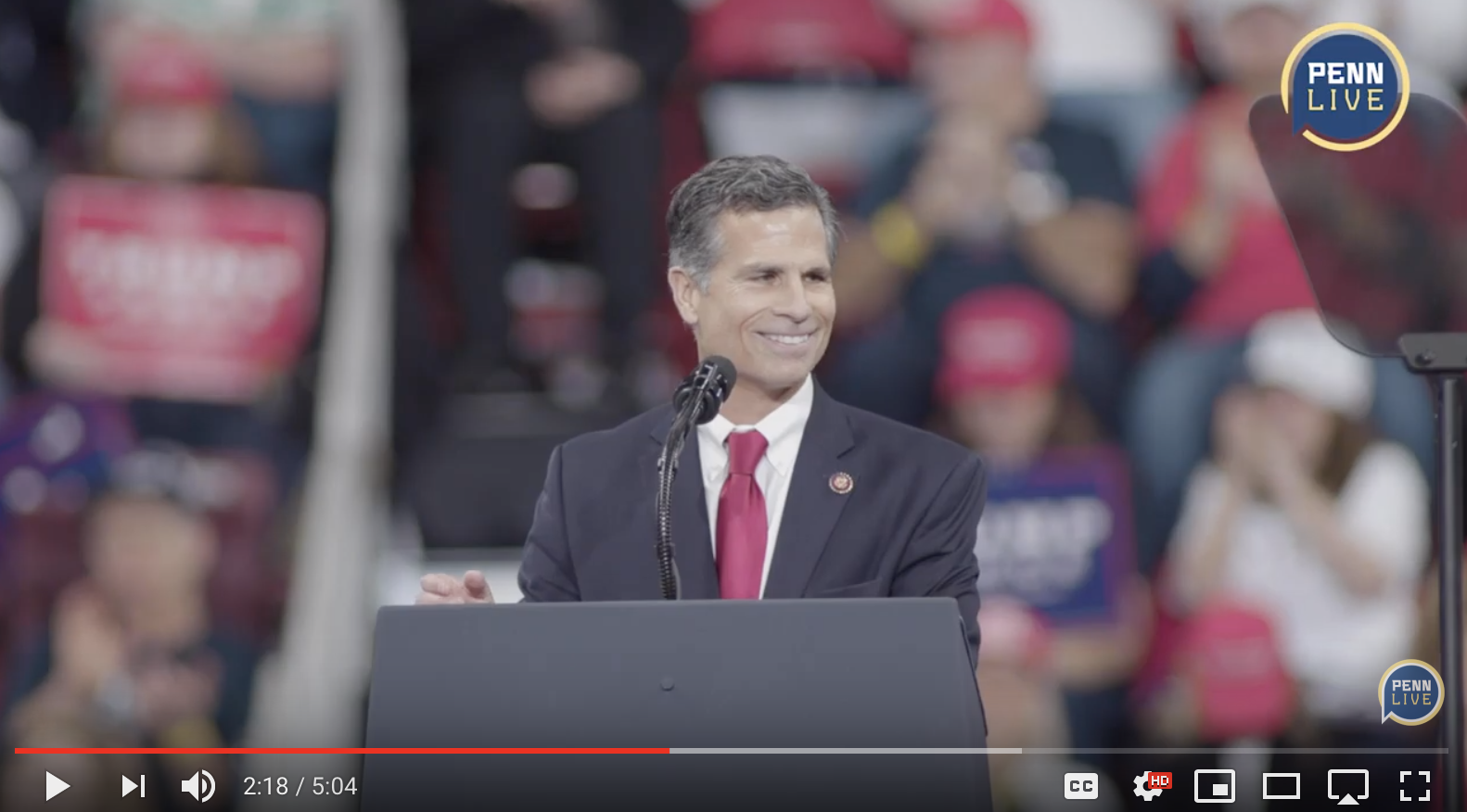 Below, Shelley and I are pictured with State Senator Kristin Phillips-Hill, radio host RJ Harris and Dave Bray USA. 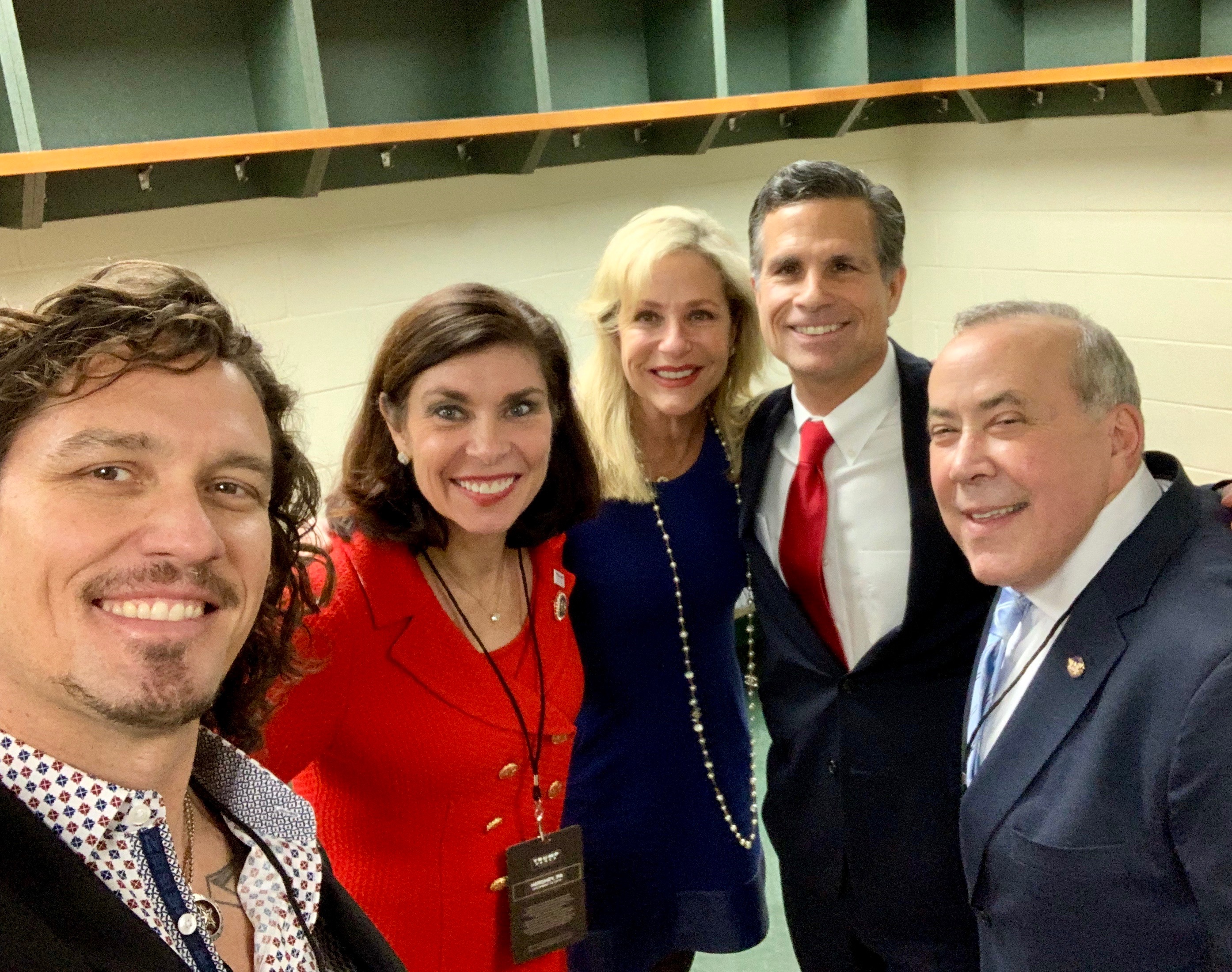 Are you tired of winning yet? Yep. me neither. Under President Trump’s leadership, our country is winning… taxes are lower, the economy is thriving, unemployment is at record lows, our border is more secure and our country is safer. We can’t afford to stop now. We must re-elect President Trump and Keep America Great.

As I am sure you are aware, it is more critical than ever, we ensure Republicans win back control of the U.S. House of Representatives. As we watch Speaker Nancy Pelosi, Adam Schiff and Jerry Nadler continue this sham impeachment charade, it is clear that we need a change in leadership in the U.S. House. Nancy Pelosi has wanted to impeach President Trump since before he even took office.

As I have stated all along, this process has not been fair. Sixteen out of the twenty-four Democrat members of the House Judiciary Committee, the Committee that this week drafted articles of impeachment, voted to bring up the President’s impeachment in mid-July before any calls with Ukraine took place. Further, Jerry Nadler has supported impeachment since the day he became Judiciary Committee Chairman. This should be an outrage. We are witnessing a politics-driven attempt to impeach a duly-elected President, which is a complete abuse of what congressional impeachment powers were meant to be. 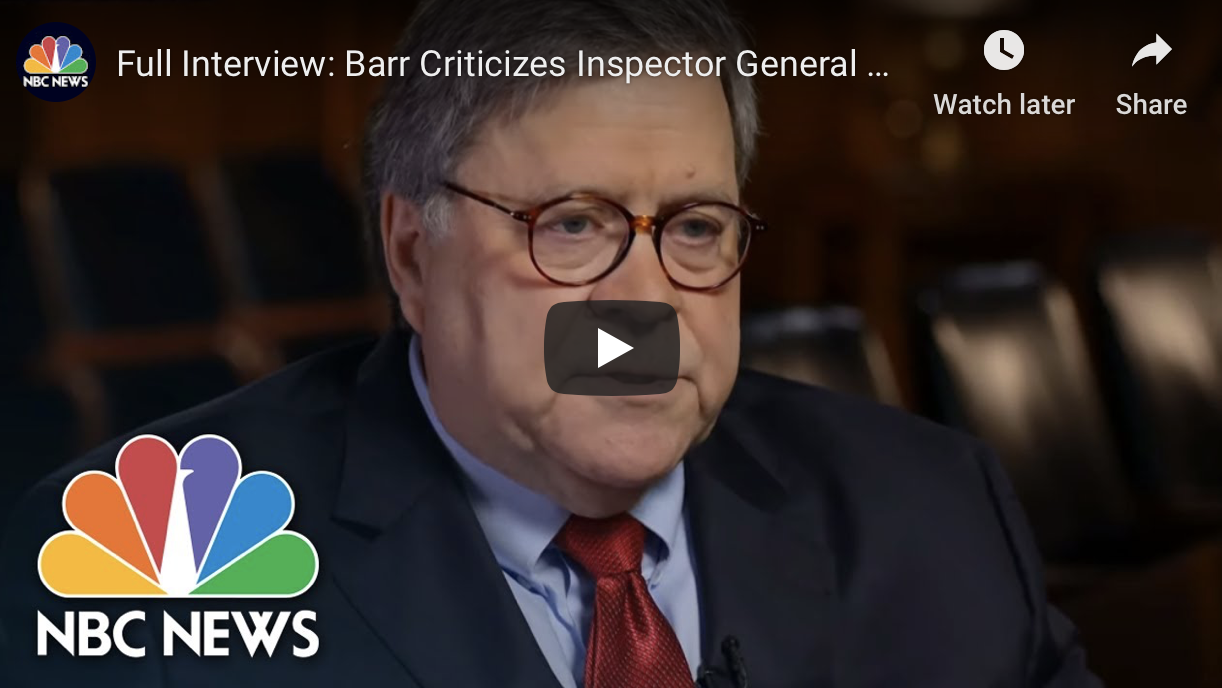 This week, I spoke on the floor about my support for H.R. 19, the Lower Costs, More Cures Act. This legislation would lower out-of-pocket spending, spur competition and innovation and empower patients to make informed choices regarding their medications. This is the first step in helping to lower healthcare costs, insurance premiums, including prescription drug costs.

In major news, we passed the National Defense Authorization Act (NDAA). This agreement provides the biggest pay raise in a decade for our troops, strengthens our military, and establishes a Space Force to better defend against 21st-century threats. This a big win for the President of the United States, Republicans, Americans and our military. This legislation provides additional funding for border security without restrictions, missile defense, Space Force and most importantly increases wages for members of our military. With record-low unemployment and a competitive job climate, raising wages for our military is critical and these brave young men and women deserve as they fight to protect our country.

On Friday, I took part in an event to honor and thank U.S. Army veteran Sergeant Francis O’Donnell, and to reissue medals earned during the Korean War. Click here to watch a report on the event from WNEP. 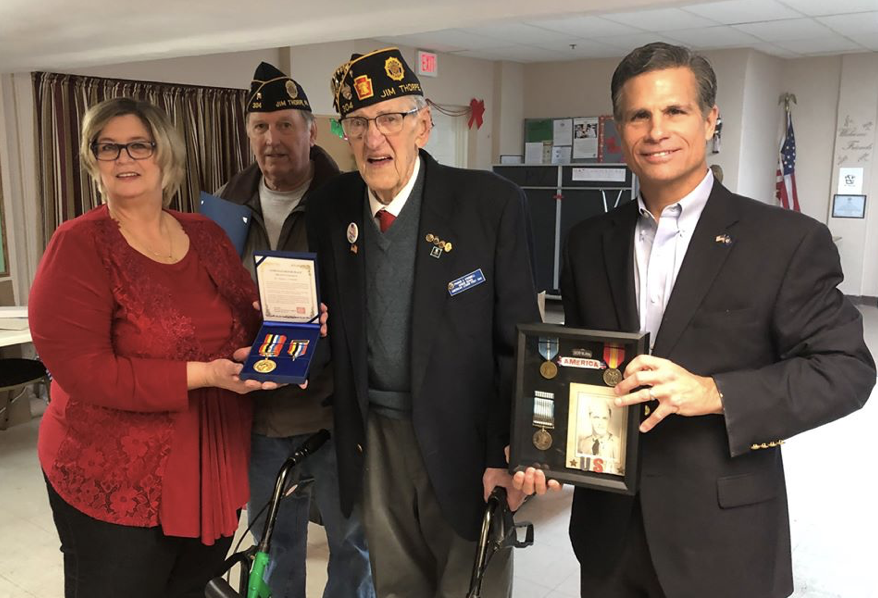 Yesterday, I joined many other volunteers and officials as we placed Christmas wreaths on the graves of our brave veterans at Fort Indiantown Gap. I want to thank everyone for coming out to support this important event. We can never forget those brave men and women for their service. I am pictured below with State Senators Mike Regan and John DiSanto. 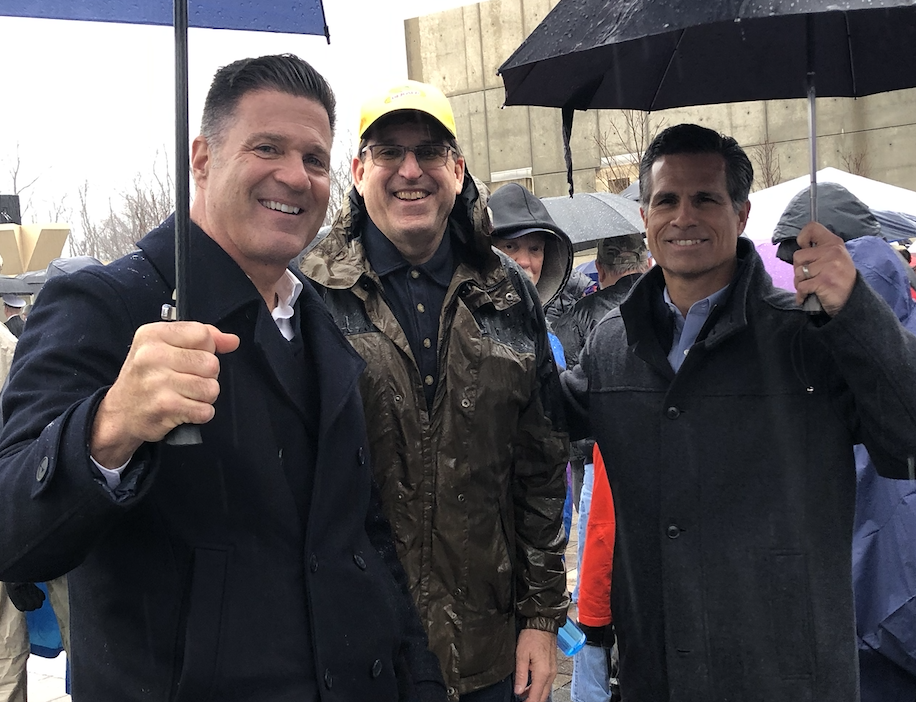 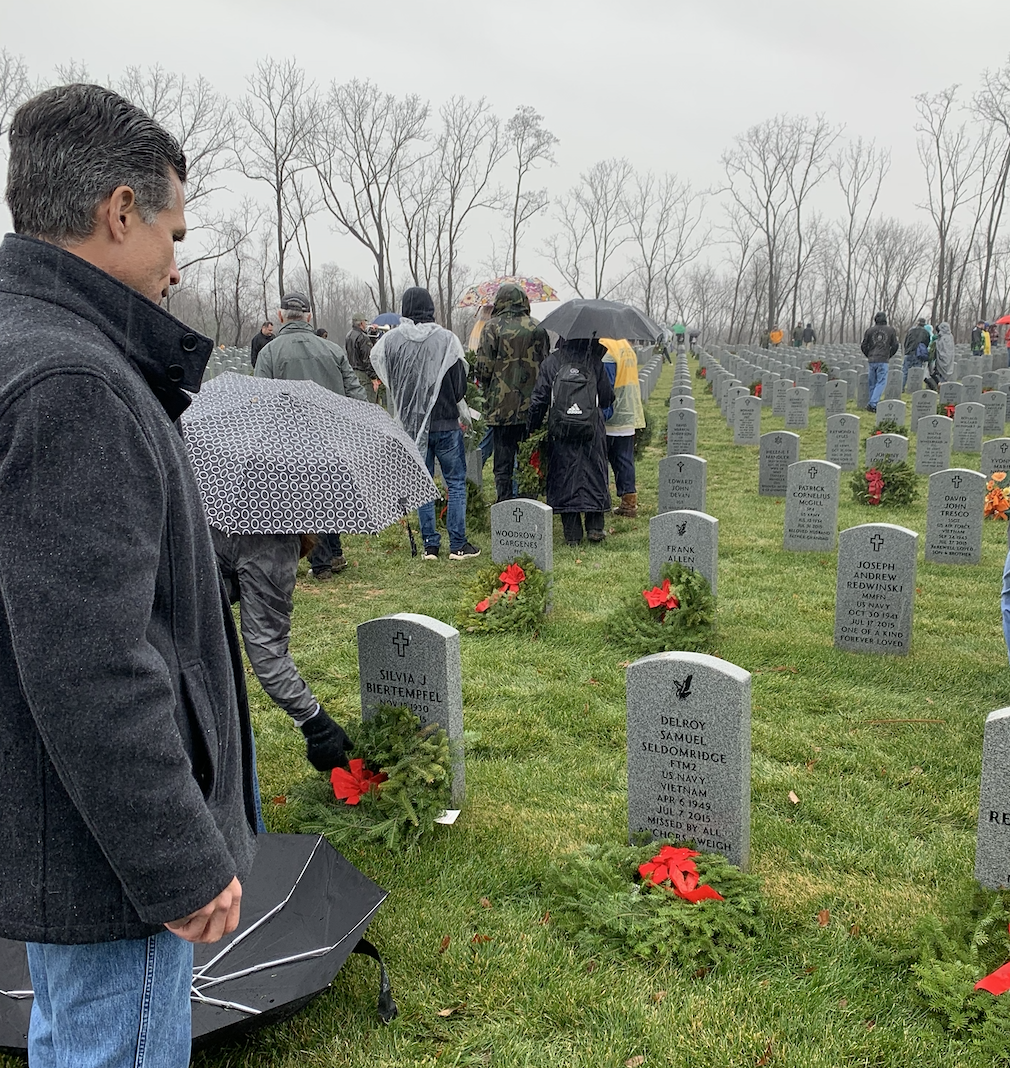 IN NEWS YOU WON’T HEAR IN THE MAINSTREAM MEDIA: Perhaps lost in the Democrat's sham impeachment proceedings, was Speaker Pelosi's politically motivated decision to finally call a vote on the United States–Mexico–Canada Agreement (USMCA). As President Trump said, if there is a silver lining to the Democrat's ridiculous impeachment efforts, it is that Speaker Pelosi is finally bringing this important legislation to a vote.

More than a year ago, President Trump delivered on a signature campaign promise when he signed a modern, rebalanced trade deal with Canada and Mexico. After a year’s worth of putting politics over the people, House Democrats have finally acquiesced to the will of the American people and agreed to vote on the new USMCA.

For years, NAFTA rules have helped incentivize offshoring, which led to manufacturing jobs leaving the United States in bulk. As a result, politicians from both parties have called to reform our trade terms with Mexico and Canada ever since the deal first passed in the mid-1990s.

Nothing happened until President Trump got Mexico and Canada to the negotiation table and got them to sign a new deal. Here are just a few ways it updates and improves NAFTA:

Democrat leaders’ attempted to put politics over the people, desperately attempting to avoid giving President Trump a signature win on one of his core issues. But USMCA highlighted the divide between far-left Washington partisans and practical, results-minded local officials who supported the deal. In the end, a growing chorus of diverse voices—everyone from labor leaders to small business owners—finally forced Speaker Nancy Pelosi’s hand.

USMCA is a huge win and another promise kept.

While we are awaiting all the final details, we want to congratulate President Trump for negotiating a great new trade deal with China. This President has accomplished so much in such a short period of time.

Lastly, Shelley and I attended the White House Christmas Party where we saw a number of great Americans, including U.S. Justice Brett Kavanaugh, House Republican Whip Steve Scalise and his wife Jennifer, former New Jersey Governor Chris Christie and Presidential Advisor Kellyanne Conway. There is also a picture of Shelley advising the President on how he will win Pennsylvania in 2020. We also go to see the Christmas tree, from Schuylkill County, adorning the Blue Room of the White House. The two main trees at the White House are both from our District. It is phenomenal. 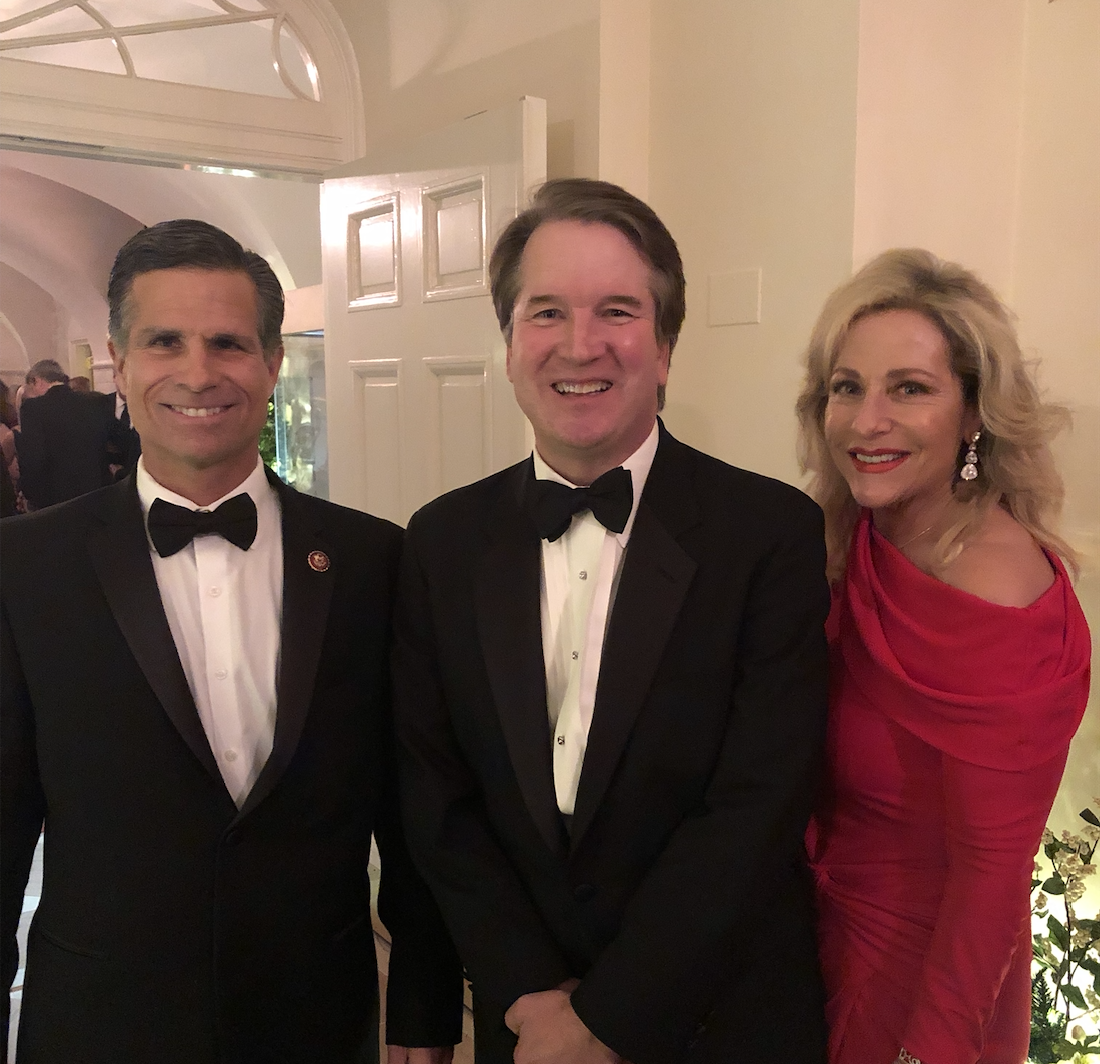 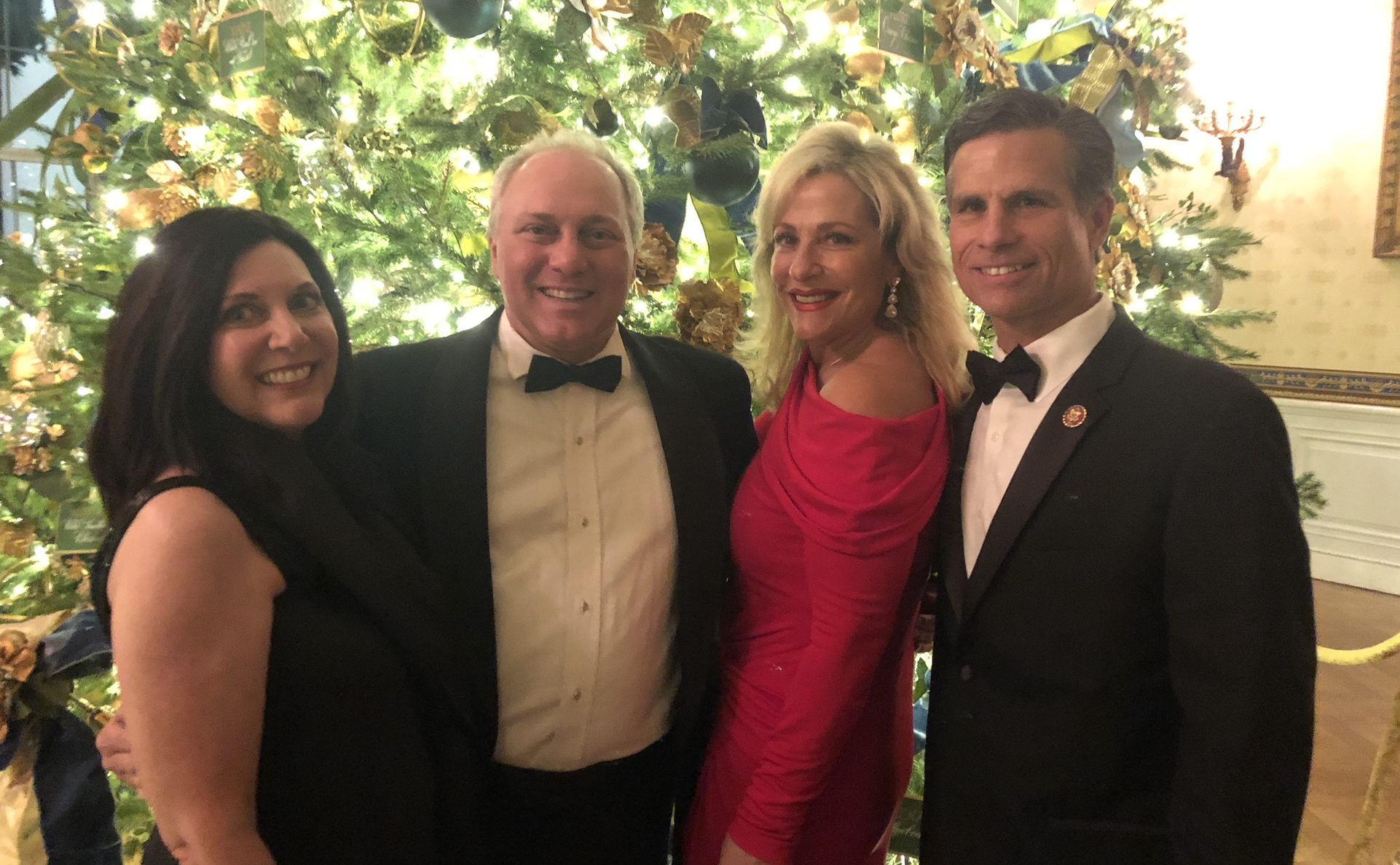 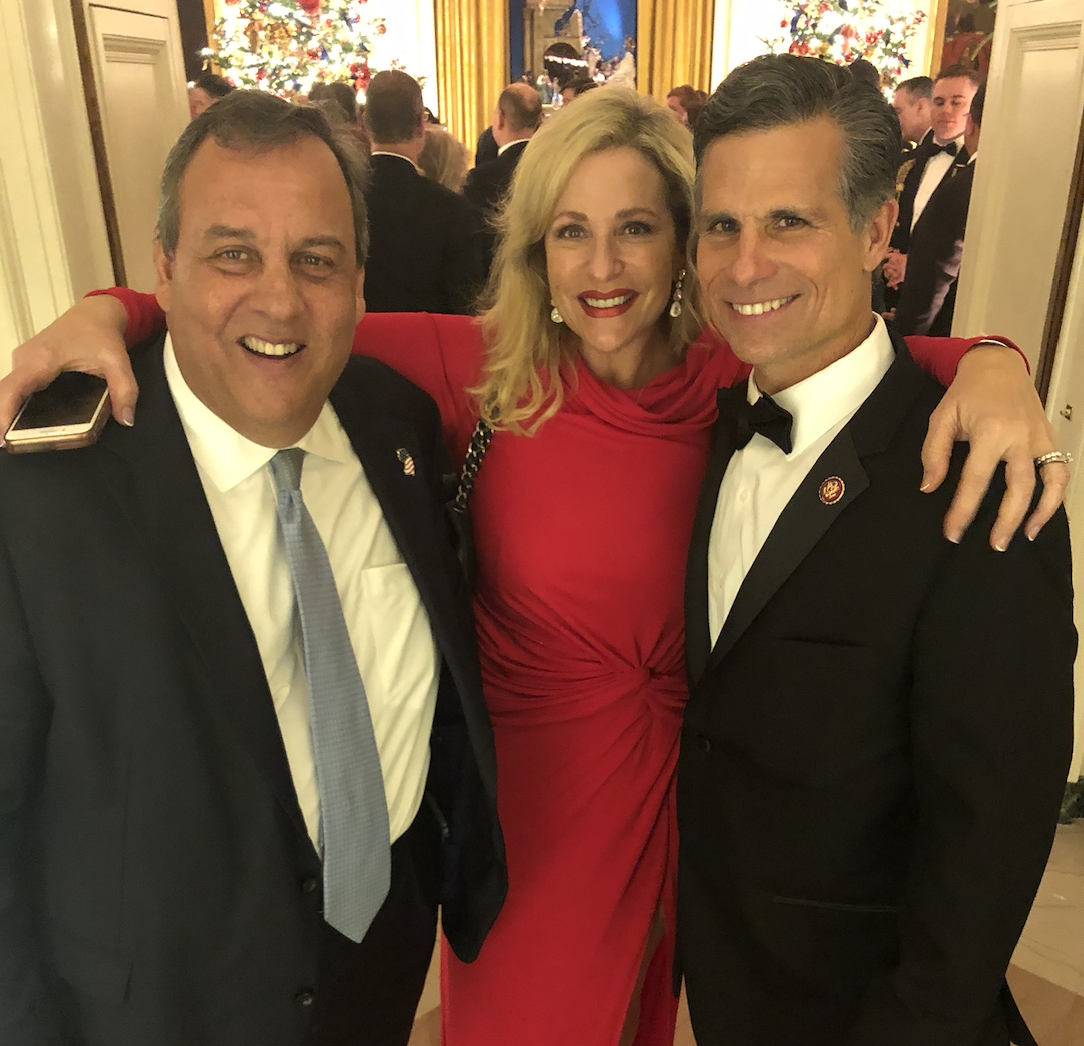 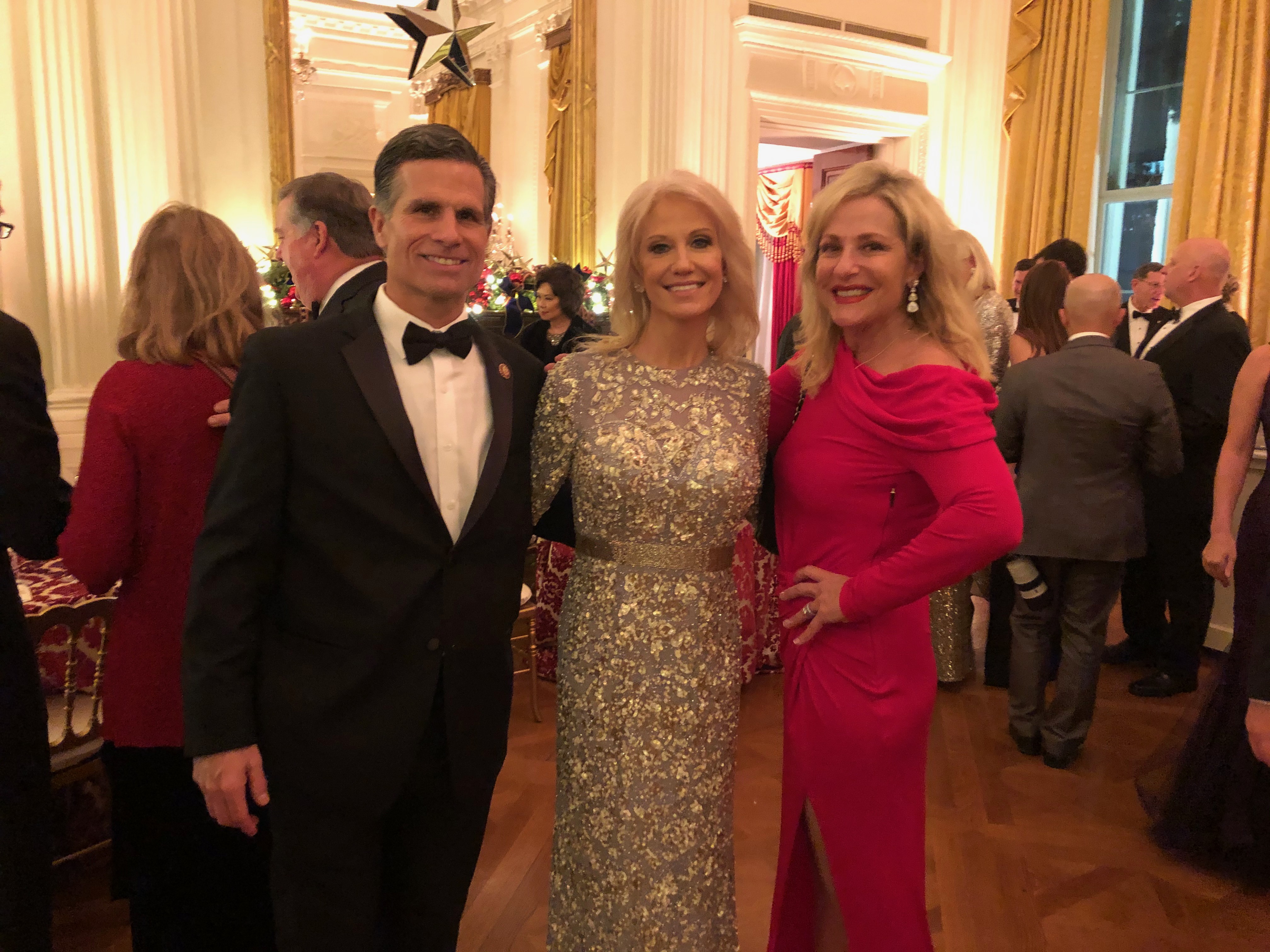 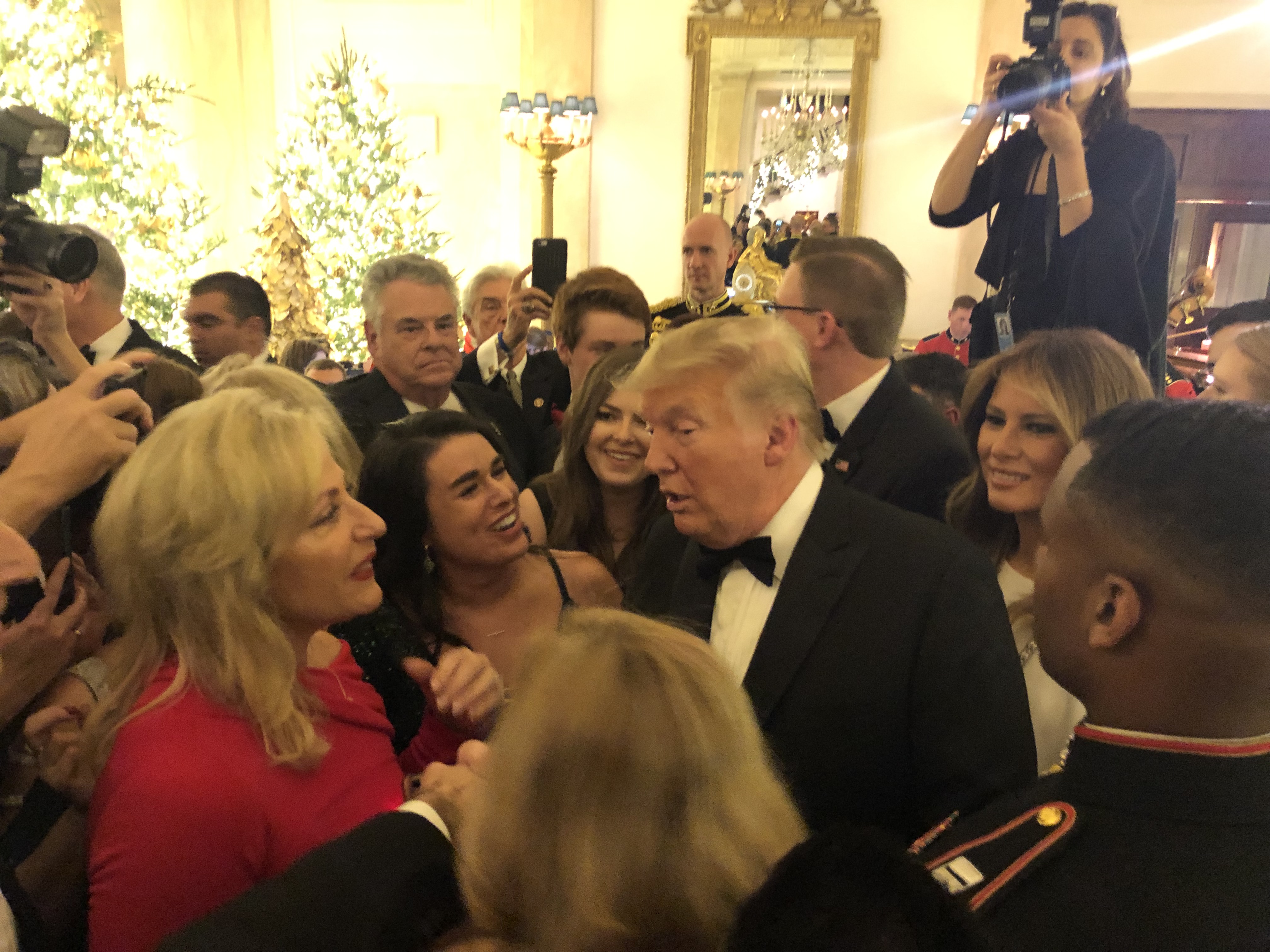 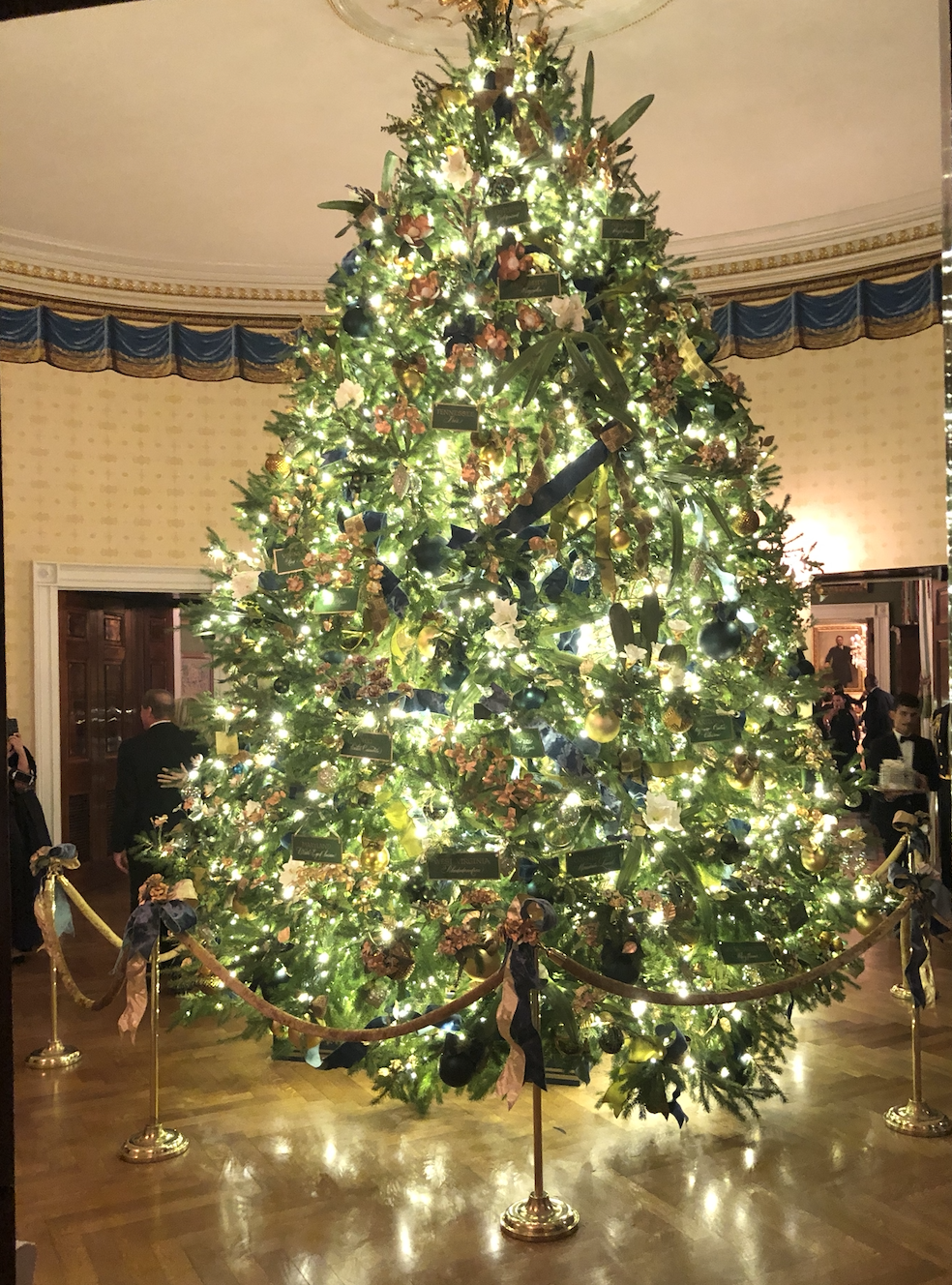