LUZERNE COUNTY - Dan Meuser for Congress is proud to announce the opening of our campaign headquarters, right in the heart of Pottsville in Schuylkill County. The location is 100 Centre Street, 2nd Floor, right at the busy intersection of Centre Street and Route 209.

Large Dan Meuser for Congress signs are presently displayed in the windows of the new campaign office and the candidate and members of his campaign staff were on hand this past weekend for the St. Patrick's Day Parade in Pottsville, which, among places, marched right in front of his campaign headquarters.

"Our campaign sees tremendous opportunities for an economic revitalization in Schuylkill County. Too many residents of this county are extremely frustrated by increases in county taxes and a lack of economic opportunities. Many of the residents are on fixed incomes and simply cannot afford more taxes and that is why we will fight against tax increases in Washington, D.C. Although it is not a Federal issue, we will be supportive of efforts in Harrisburg to eliminate local property taxes which are hurting far too many families, particularly our seniors on a fixed income.

“We believe in an America First Agenda--we believe in promoting public-private partnerships and creating the economic conditions that will help businesses thrive. We want the people of Schuylkill County to be assured of our commitment to them and to the revitalization of areas like Pottsville, the place we have decided to open our first campaign office," said Dan Meuser, Candidate Congress-9th PA 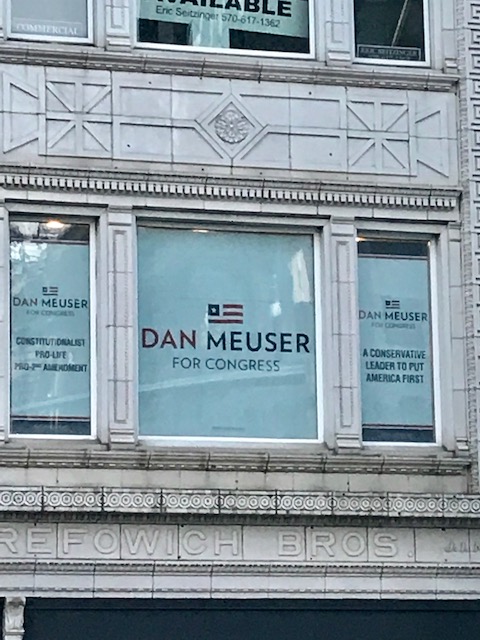 "The new, court-drawn 9th District is vast and it's important to us that we continue reach out to voters across every single county.  We have been working hard for six months on this campaign in 5 of the counties that were in the old 11th Congressional District and are now in the new 9thDistrict.  We are going to work just as hard in these three new counties, Berks, Lebanon and Schuylkill, as we have in the other 5 counties. We are concentrating heavily on building out these grassroots networks in these new counties and have been humbled by the amount of support we have already received. We have met personally with thousands of voters and will continue to work hard to further build our tremendous grassroots support momentum in the weeks ahead."

Hours of operation for the Meuser for Congress Headquarters in Pottsville to be announced on their Facebook page and website soon.